Did Ian Nepomniachtchi miss a win against Fabiano Caruana in their Round 2 matchup at the Sinquefield Cup? It depends on what you mean by “miss.” The Caruana-Nepomniachtchi game was one of six draws in yesterday’s second round, and one of eleven draws (out of twelve games) in the first two days of the event. It might be tempting to draw dovish conclusions from this small sample, but in this case, such a conclusion would be wrong. 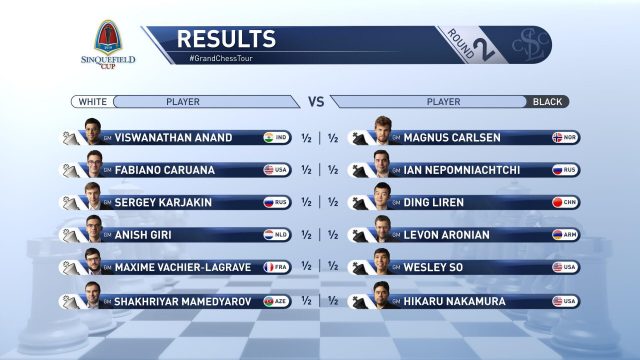 courtesy STLCC
Excluding the perfunctory Karjakin-Mamedyarov draw in Round 1, many of the draws have been solid, fighting games. This was certainly the case yesterday, with Mamedyarov and Nakamura going so far as to play to bare kings. 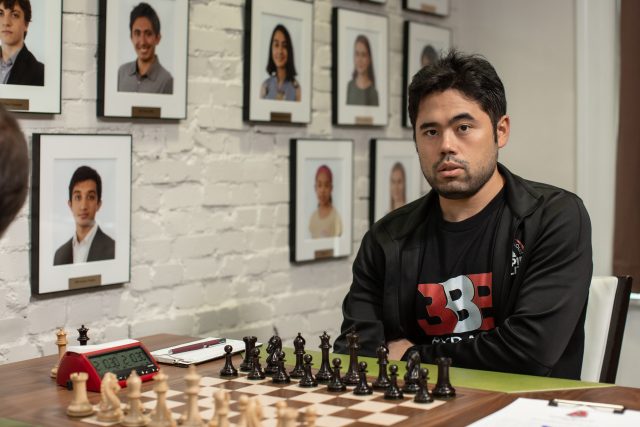 Nakamura (photo Justin Kellar)
World Champion Magnus Carlsen took another step, if a shaky one, towards normalcy after a disastrous (by his standards) Saint Louis Rapid and Blitz. Playing Black, Carlsen held the draw against Vishy Anand in 45 moves. 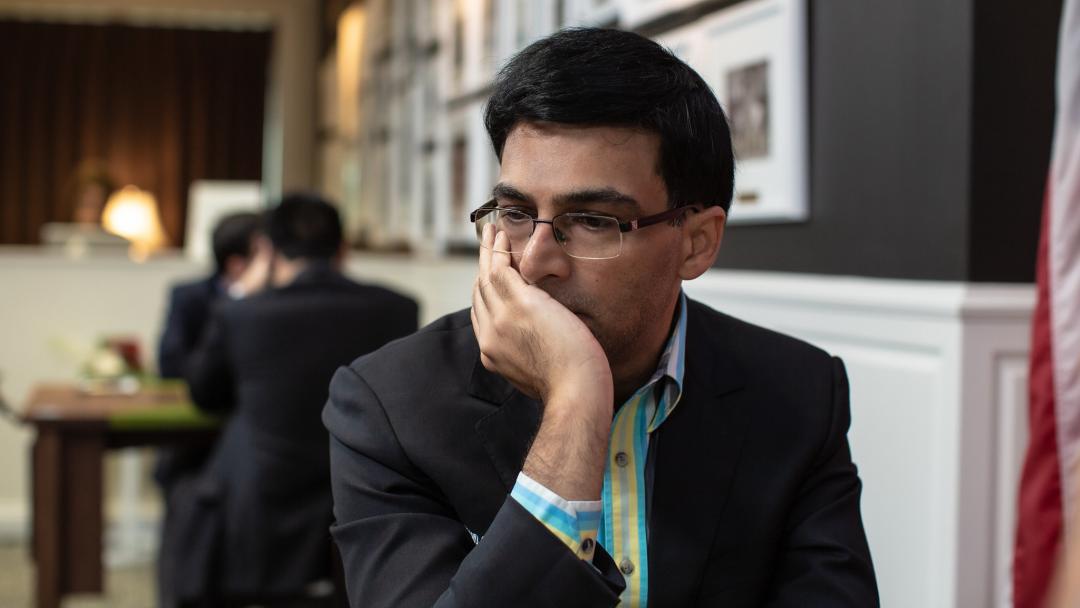 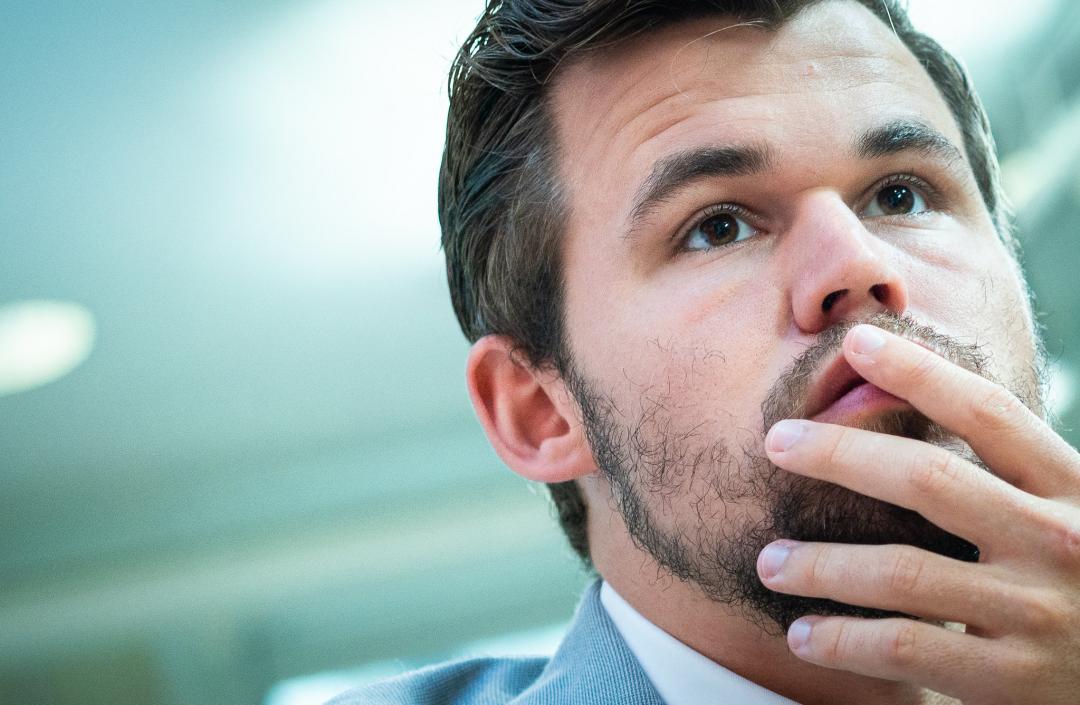 Magnus Carlsen (photo Lennart Ootes)
Eschewing his standard 4…dxc6 in the Rossolimo, Carlsen fell behind in development in the late opening, prompting this interesting comment from the Champ in the Confessional booth. https://twitter.com/GrandChessTour/status/1163165721775497217 Frequent CLO contributor Eric Rosen pointed out on Twitter that this pawn structure – with pawns on f6 and d6 – is not unknown in Carlsen’s practice… if you have studied his lichess games?!?! https://twitter.com/IM_Rosen/status/1163168835509395456 Ultimately Carlsen did manage to castle, and he managed to draw Anand without too much difficulty. Carlsen took another trip to the Confessional, this time to praise Maxime Vachier-Lagrave for his textbook positioning of his pieces against Wesley So. https://twitter.com/GrandChessTour/status/1163172069158379520 As it turned out, So’s extra pawn (and later exchange) was sufficient compensation for MVL’s “perfect positional harmony,” and the game was drawn without great difficulty. 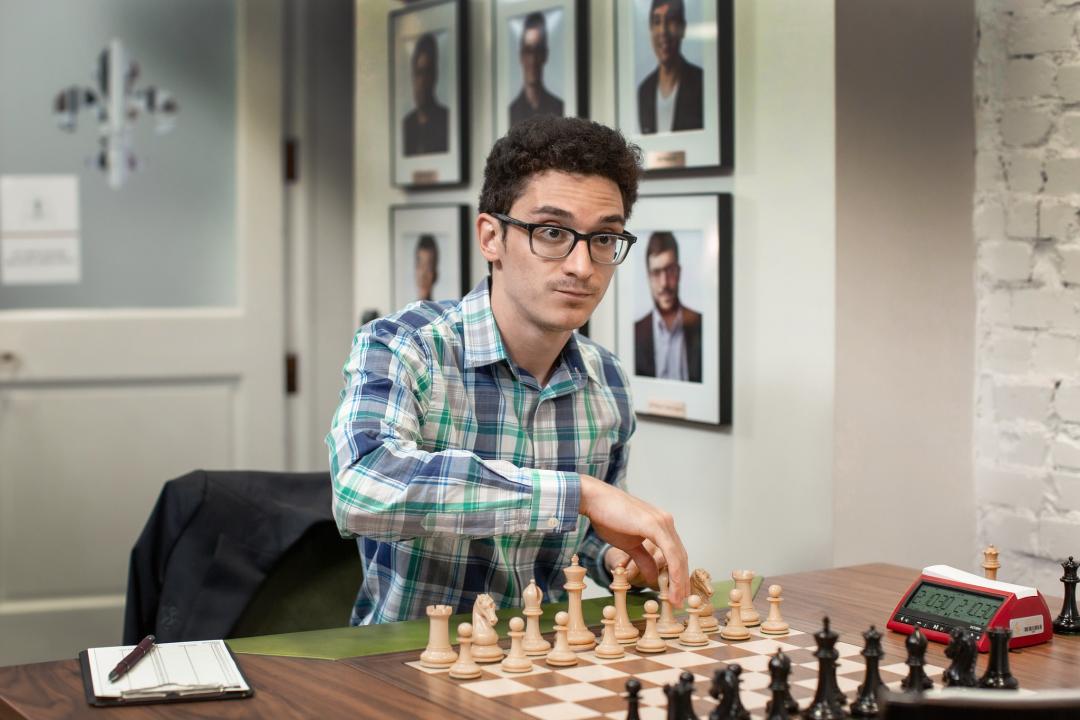 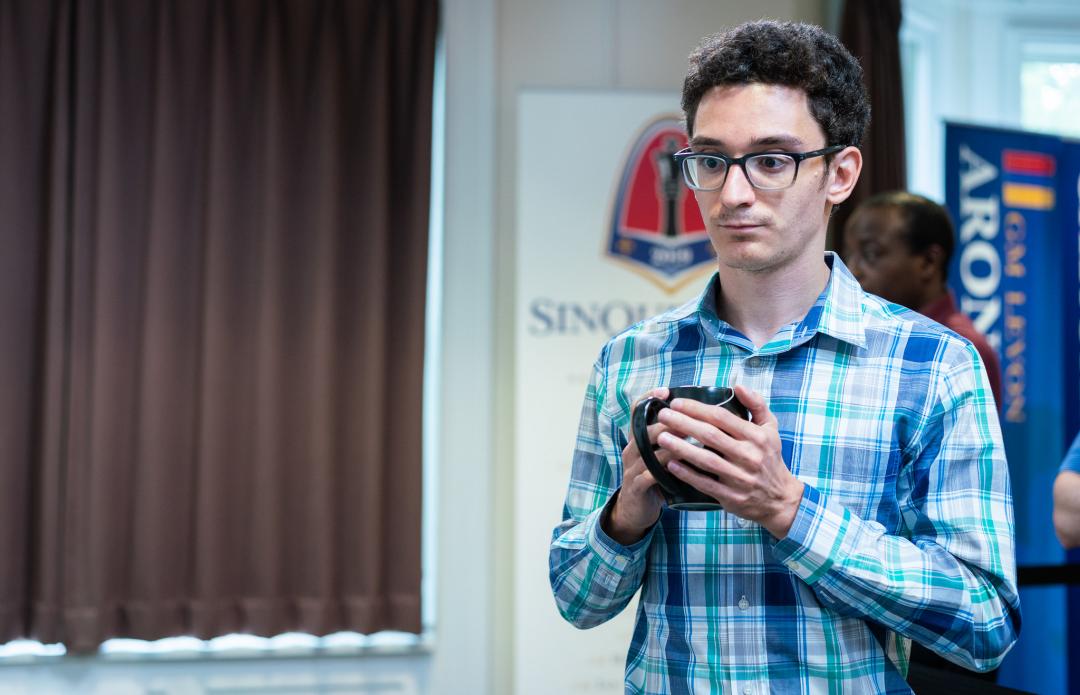 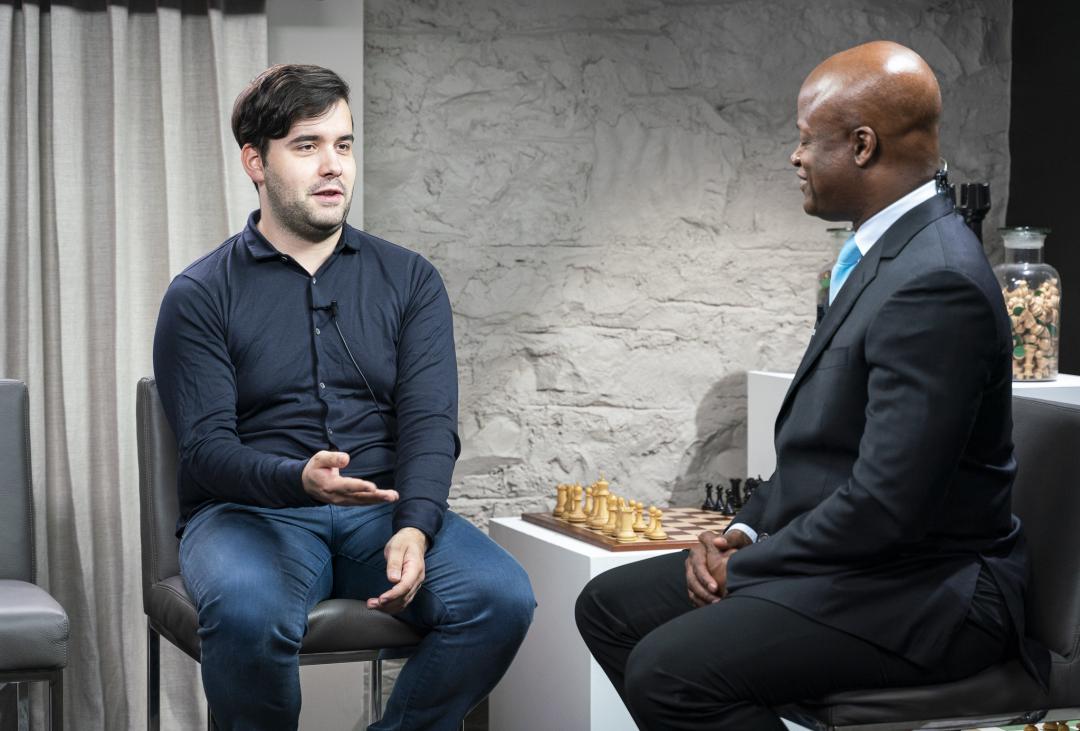 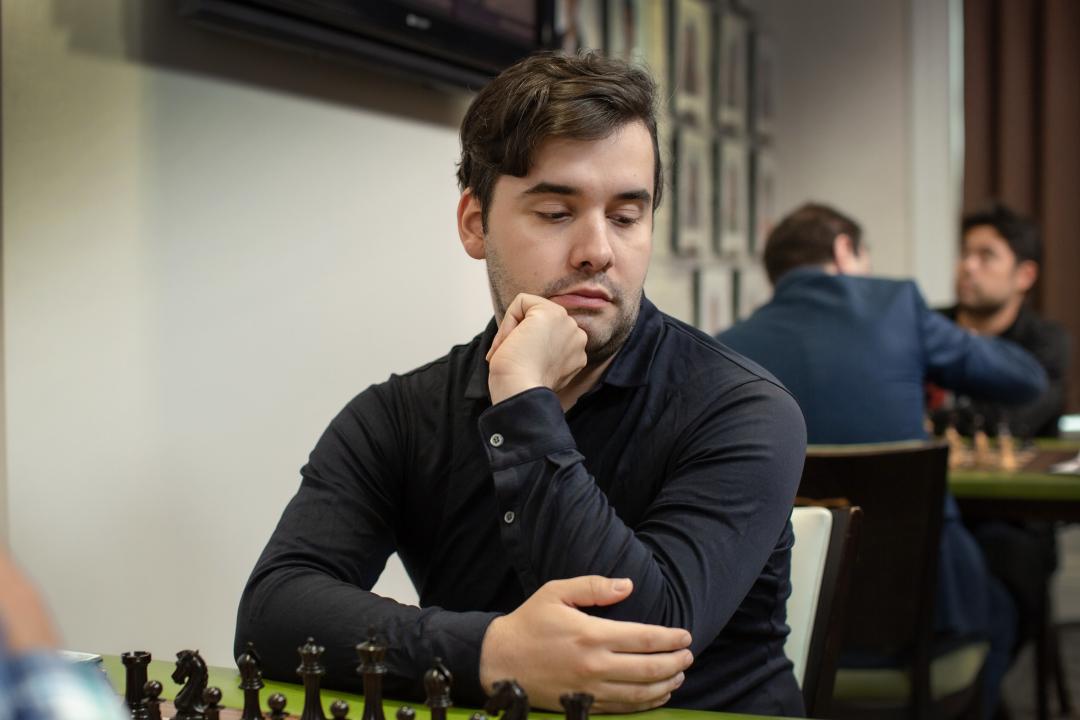 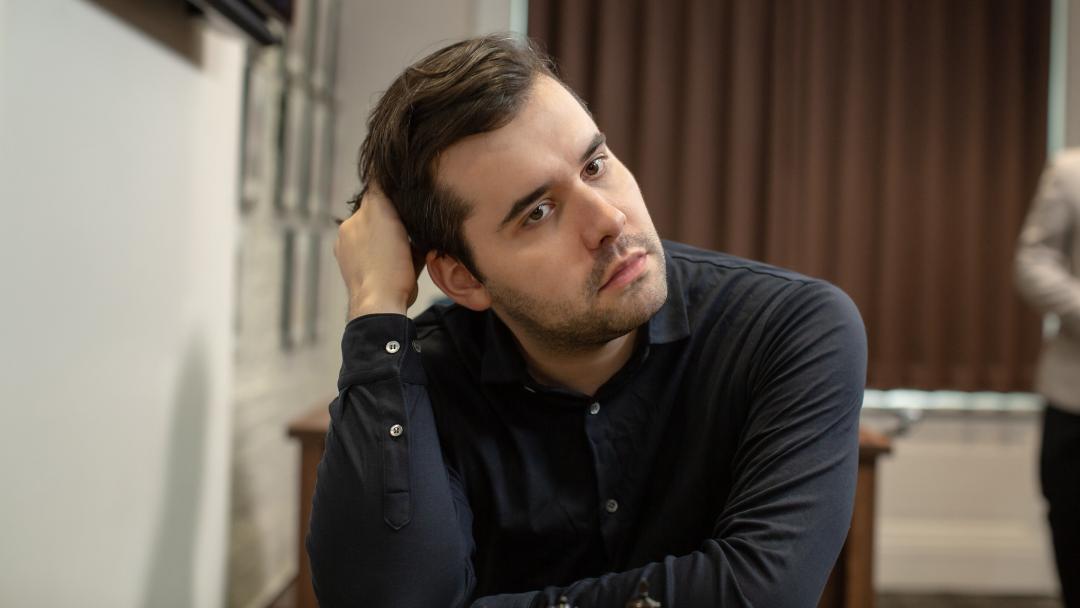 photo Justin Kellar
The highlight of the round, and the main focus of this report, had to be the game between Fabiano Caruana and Ian Nepomniachtchi, and in particular, the position after Black’s 27th move. Here Caruana played 28.Qg2, with the clear idea of countering a potential Black rook sacrifice on a3 with 28…Rxa3 29.bxa3 Qxa3 30.f3, covering the second rank and snuffing out any danger. The problem, as anyone with an engine running immediately saw, is that after the Dvoretsky-esque backward move 30…Qa7! Black was nearly winning. https://twitter.com/GrandChessTour/status/1163194565442134018 In the game, and despite (per his post-game interview) his constantly being on the lookout for …Rxa3 shots, Nepomniachtchi instead chose what he thought was another winning move, 28…Bf8?!, and the game soon petered out to a draw. Question: did Nepo miss a win? Let’s begin by stipulating that 30…Qa7 is deeply counter-intuitive. Black sacrifices a rook for an attack, but then is supposed to switch gears and make a backwards queen move? It’s the kind of move that engines see immediately, but humans with their biases will (in my opinion) more often than not miss it. With engines running, however, the whole idea is obvious once we see the key move. And it’s for that reason that the commentators, who have benefit of hints from the engine in the diagram window (if not outright confirmation from Maurice), were right to quote a line from Anand in this situation. Paraphrasing, Anand said that the problem with the engine is that in certain positions, once you see its move, you can’t “unsee” it. On that basis we retroactively attribute blame or fault to players in situations where, from any reasonable practical perspective, they can’t possibly be expected to find the move in question without a hint or silicon assistance. https://twitter.com/GrandChessTour/status/1163198411794976768 While it’s not nothing that Wesley So was able to find the key move with a bit of a hint from Maurice Ashley, the fact that So was asked the question changes the nature of the task. Here we run into something like what quantum physicists (and students of German Idealism) think of as the observer effect. Measurement of phenomena, particularly quantum phenomena, is altered by the presence of instrumentation or observers. Somewhat analogously, our understanding of chess positiosn is altered (retroactively) by the presence of chess engines. Once the engine shows us something, we can’t ‘unsee’ it, and it causes us to lose objectivity about our thought processes. So back to the question at hand. Should Nepomniachtchi realistically have found 30…Qa7, and should we thus consider this a miss? Denes Boros answered in the negative: https://twitter.com/Gmasterg4/status/1163192855323652096 The Twitterati are less generous, if Jennifer Shahade’s poll is any indication. https://twitter.com/JenShahade/status/1163505219566821380 As for me, I’m on the fence. Certainly 30…Qa7 is very difficult to find, but it’s not as difficult as 68…Bh4! (and 70…Ng1!!) were in Game 6 of the Carlsen-Caruana match. (Thanks to Jen Shahade for the example.) There, no one could reasonably have expected Caruana to find the arcane ideas deep in the field of analysis; here, however, it doesn’t feel implausible that Nepo could have tracked it down. STANDINGS AFTER ROUND 2 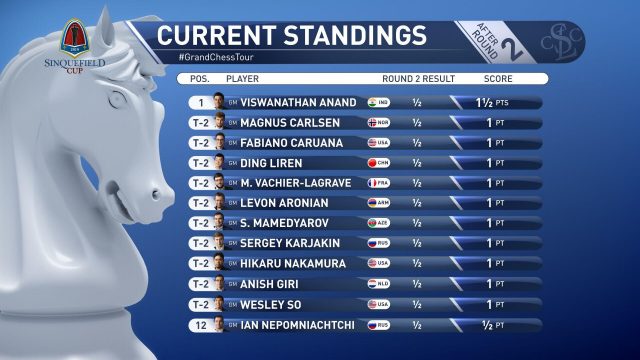