The Blindfold King: From California to New York City

GM Timur Gareyev has been working towards the ultimate world record event playing 47 games simultaneously this year. Among his recent feats are 35-player event in Santa Clara, CA, landslide victory at Marshall Chess Club, and a magnificent challenge of the minds coming up at UMBC on April 24. 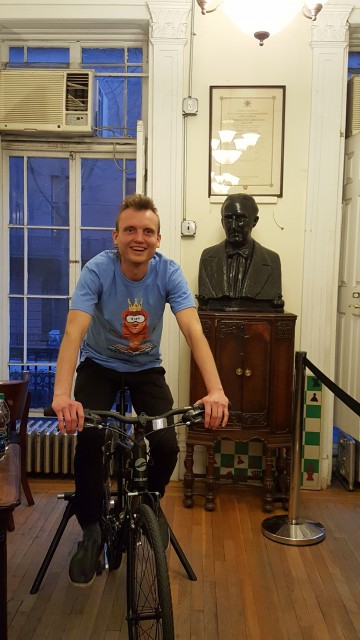 On Saturday, March 12, 2016, Grandmaster Timur Gareyev performed a 35 board simultaneous blindfold exhibition at the Let’s Play Chess Club in Santa Clara, California. Chess students, enthusiasts, and players from Northern California attended this unique chess spectacle of body and mind. The atmosphere was casual, loose, and friendly as the players started arriving at 8am. We started off with a Tai Chi warm up a little before 9am. 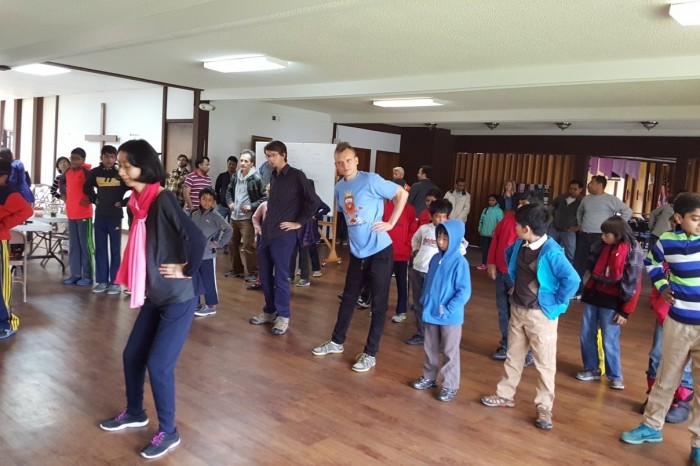 After greetings and random board assignments. Timur chose to alternate colors, starting with white on board 1. The blindfold exhibition began at 9:45am. His competition was mostly comprised of my K-8 students (u1800). Due to the duration of this event, players were permitted to play as teams. Timur spoke and received the moves from the participants  Timur wore a blindfold while riding a spinbike for the duration of the event. He snacked on some red peppers & Persian cucumbers while occasionally drinking water. Timur played a wide variety of openings and defenses. Six participants requested to leave earlier. Timur accepted the challenge and faced the players in a rapid play format. At 11:45am, Timur blindfold blitzed those six boards (with ten seconds per move) while the other 29 players took the time to witness the blitz off and have lunch. Simultaneous play resumed at 12:15pm. Within two hours players reached positions at move twelve. As Timur eased into the exhibition, he began moving more quickly, many times replying instantaneously at his turn. 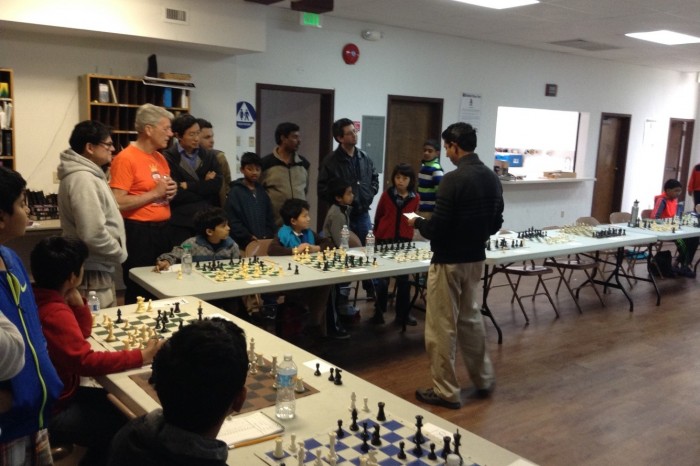 Participants witnessing a player’s position being resolved
In the early afternoon, a player had an incorrect position and incomplete scoresheet. Timur instantly recounted the game’s moves in order from move one, allowing the player and helper (the helper played Timur’s moves over the board) to reconstruct the position so the game could continue. As play went into the early evening, Timur had defeated most opponents, drawn one game, and taken only three five-minute breaks. Only half a dozen determined opponents remained, who were now allowed passes as the tempo and pressure increased. GM Gareyev finished the exhibition at 9:01 pm and scored 33/35, losing to the team of 7 year old Vignesh Jami and UC Berkeley freshman Arvind Sankar. Arul Viswanathan and Andrew Ng both individually drew versus Timur. We all had a wonderful and memorable day that we will never forget. This event ran smoothly thanks to the efforts of the students and their families, our volunteers Arvind Sankar, Sankar Swaminathan, and Vishy Swaminathan, Resurrection Lutheran Church and Pastor William Schultz, Off Da Rook, and Xcell CHESS. Our website has additional information on the event: http://chessthings.com/blindfoldchess.php

This was my best effort in a smaller match vs. strong opposition of about 1700 USCF. I managed to win all of the games just under 3 hours. This got me thinking on what made my results, quality of the game, and endurance improve so dramatically. I believe the number one factor is exercise! It is truly amazing how much better you can do intellectually as you get that extra oxygen and blood flow in your system. Marshall Chess Club is a legendary venue which recently hosted Final Four Collegiate Championship. Dr. Frank Brady was generous to take his time and give an opening speech. 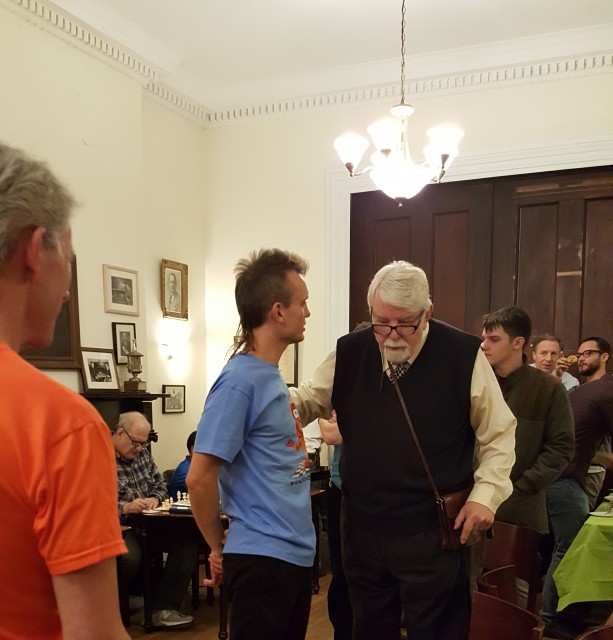 Blindfold chess is a mystery of the mind discovered primarily through mastering the game. When the boards multiply is when it gets tougher and you may just have to develop your sixth sense. The participants did their best in the moments of complexity. However the “Blindfold King” was on top of the game! 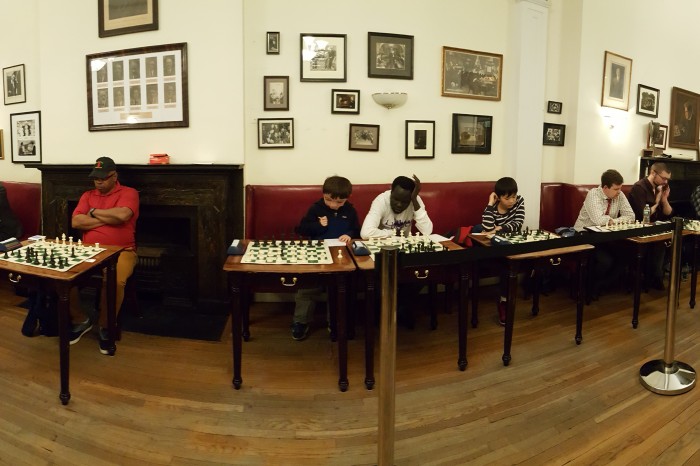 The most “experienced” opponent was 8-year old Philip on Board 4. One of the strongest players was Majur Juac who started off in sacrificial Evans style but faced tough defense and could not keep up the momentum. And the last one to finish was the tough teenager on board 10! Among other prominent visitors was Irina Krush who is now competing to capture another title at US Women’s Championship 2016. 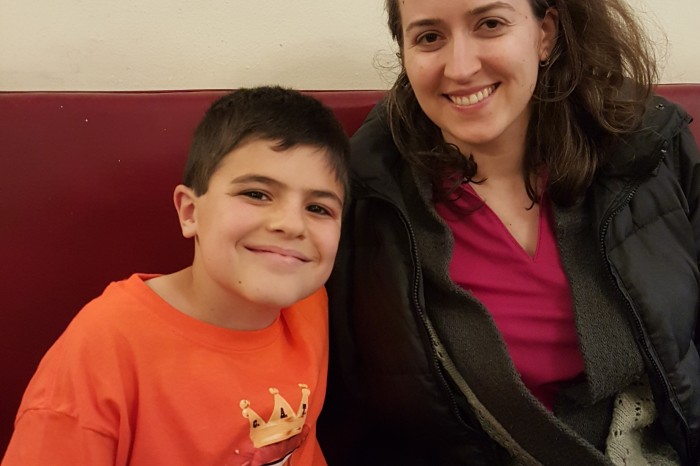 Irina together with Mason who visited NYC for the first time 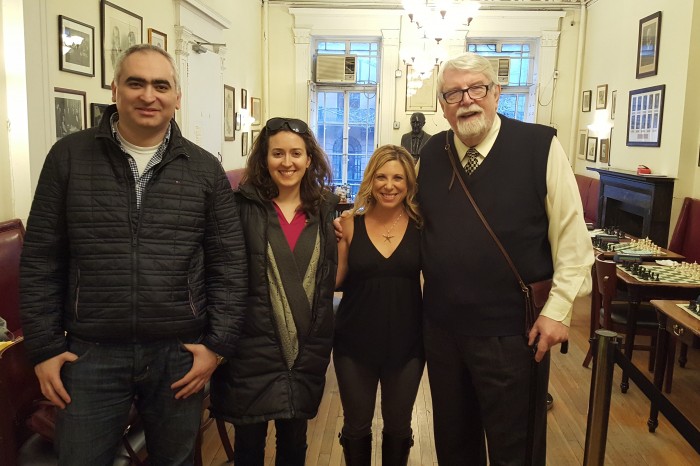 Giorgi together with his “best student” Irina, as well as Dr. Brady and Jennifer Vallens 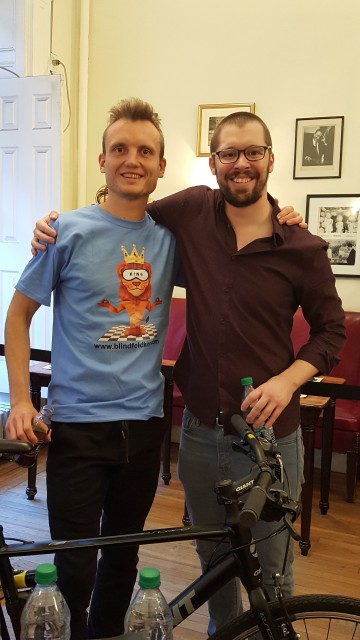 President Bryan Quick welcoming Timur at Marshall Chess Club
As I get back from Ireland, I have one of the most challenging events so far on Sunday April 24. Not only will I be playing a traditional blindfold simul, but I will also face the best of UMBC Grandmaster Team in a knockout match! http://chess.umbc.edu/files/2016/03/Blindfold_Chess_v3.pdf 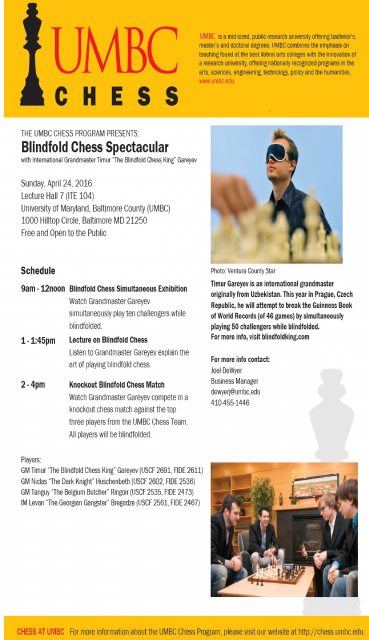