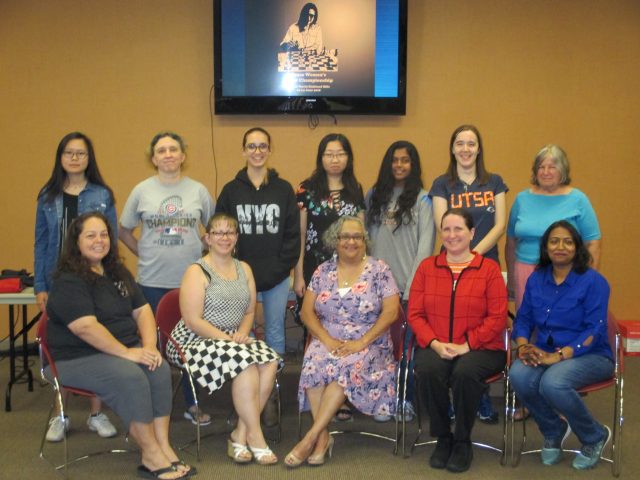 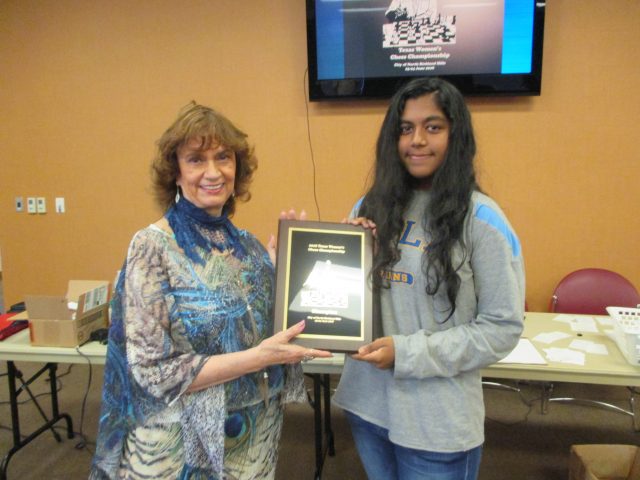 Dr. Maritta Del Rio Sumner and Devina Devagharan. Photo: Alexey Root
Devagharan’s favorite game was her fourth round win over Camille Kao. Although Kao tied for second, with 3 of 4, she was third on tiebreaks. However, her third round win against me earned Kao the “Athena, Goddess of Wisdom and War Award (for most brilliant game).” Kao had an advantage out of the opening, as I got confused about whether (and when) to trade my dark-squared bishop in the Stonewall Dutch. I should have kept queens on the board too. On move 29, Kao played Rh4! The only opening preparation I did was after the Saturday night banquet, where I learned that I would have Black on Sunday morning, in round 3, against Kao. I prepared the Stonewall Dutch if Kao played 1. d4 and the Rubinstein variation of the French Defense if she played 1. e4. Unfortunately, cramming lines meant that I lacked understanding of the themes of each opening and forgot necessary move orders. I had Black again in round 4 (my third Black of the tournament) against Yue Chu. I played the Rubinstein variation that I had prepared for round 3. As soon as I played 7…Qxf6 I felt very embarrassed, thinking my game would be the first one to finish in the final round. I was sure that my blunder would lead to a quick loss. Can you find White’s best line?

Show Solution When I finally achieved an equal position against Chu, I offered a draw. I was glad when she instantly accepted my draw offer, as I was afraid to play on and make another blunder! The draw put Chu in the three-way tie (with Kao and Ambriette Reed) for second place. Chu won the second place plaque on tiebreaks. 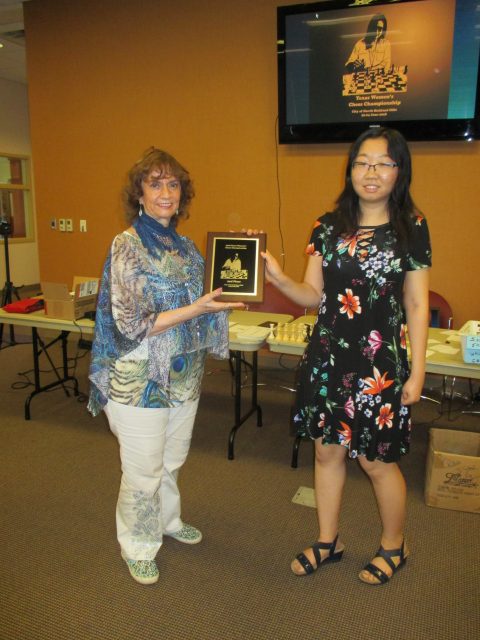 Dr. Maritta Del Rio Sumner and Yue Chu. Photo: Alexey Root
The plaques were presented by Dr. Maritta Del Rio Sumner, a retired Air Force colonel. Dr. Sumner was one of several dignitaries who gave inspirational speeches at either the opening or closing ceremonies, or at the Saturday night banquet at Niki’s Italian Bistro. As mentioned in my previous article, I prepared with Chess.com’s Tactics Trainer for the month leading up to the Texas Women’s tournament. My goal was to get five problems in a row right every day. I didn’t succeed. On a couple days, when my rabbit Denis was ill, I didn’t do any tactics at all. (Denis is fine again now.) Other days, I quit before reaching my goal. For example, on June 13 I completed 28 problems but could not get five in a row right. Since it was late at night, I gave up and went to sleep. Despite these failures, I spent more time on tactics during the last month than I had in the previous 10 years. I’m proud of my second-round tactical win, which earned the “Saint Joan of Arc Award (for most hard-fought victory).” My second-round opponent, Niemi, is a Chicago Cubs fan. After our post mortem, Niemi checked her phone for updates on the Cubs-Cincinnati Reds game. During the third inning, the Cubs had one run and the Reds had two. I cheerfully commented that it was still early, maybe the Cubs would make a comeback. Niemi said no, not with that day’s pitcher. She was right, as the Cubs lost 2-11. You can spot Niemi in the group photo, wearing her Cubs World Series T-shirt. Wendy Reed also is easy to spot in the group photo, wearing a store-bought chessboard dress with her own handmade chess-piece earnings. Wendy crocheted during her games, as crocheting relaxes her. Wendy made crocheted bags, for holding chess sets, for every player and every guest speaker. I told her that I thought it would be neat if she crocheted a chess queen. The next day, she brought one to the tournament. 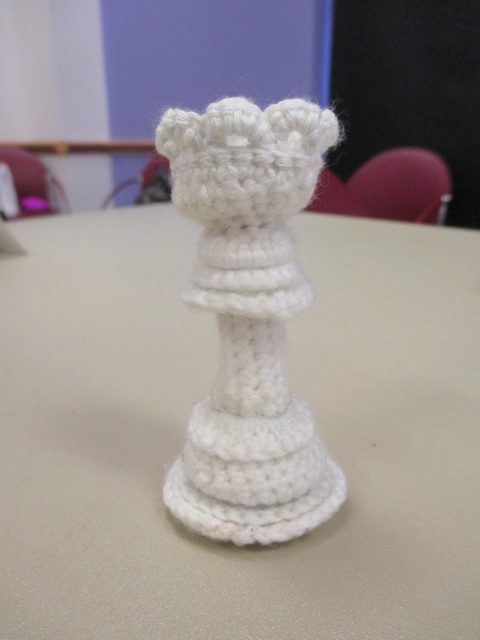 Photo: Alexey Root
Reed’s quick turnaround on craft projects was amazing. But perhaps more unbelievable was the amount of food given to the players. Adjutant Dale Chaney brought donuts, coffee, and tea for our breakfasts. Louis Reed, volunteer, and Tom Crane, floor TD and organizer, carried in cases of bottled water. Chief Assistant TD Jeff French and Chief TD and Organizer Jim Hollingsworth told us that we could eat our Chick-fil-A sandwiches and fries (Saturday lunch) and Subway sandwiches (Sunday lunch) at our boards. And, as already mentioned, we were treated to Italian food on Saturday night. Though I gained weight during the Texas Women’s, I lost rating points. I am now sitting exactly on my floor of 2000. If I had my preparation to do over again, I would keep the tactics training but spend more time on my openings. My thanks to the organizers, tournament directors, volunteers, speakers, and my fellow players for making my return to tournament chess, after three years away, enjoyable. I look forward to playing in the Texas Women’s Chess Championship again next year.

Alexey Root is a Woman International Master who was the 1989 U.S. Women’s chess champion. You can find her books on US Chess Sales and on Amazon.com. Her Chess.com handle is childrenandchess.
SHARE: