Texas Tech chalked up the only 6-0 at the 66th consecutive Pan-American Collegiate Team Championships. This makes the second PanAms title collected by Texas Tech under the coaching of Hall of Famer and GM Alex Onischuk since his taking over the team in 2012. Tech won on tiebreaks in Cleveland in 2015. This year, the Red Raiders won every round, relieving Chief Director Grant Oen and his crew from any further calculations. TTU’s Women’s team won its part of the glory by taking the award for Top Women's Team. 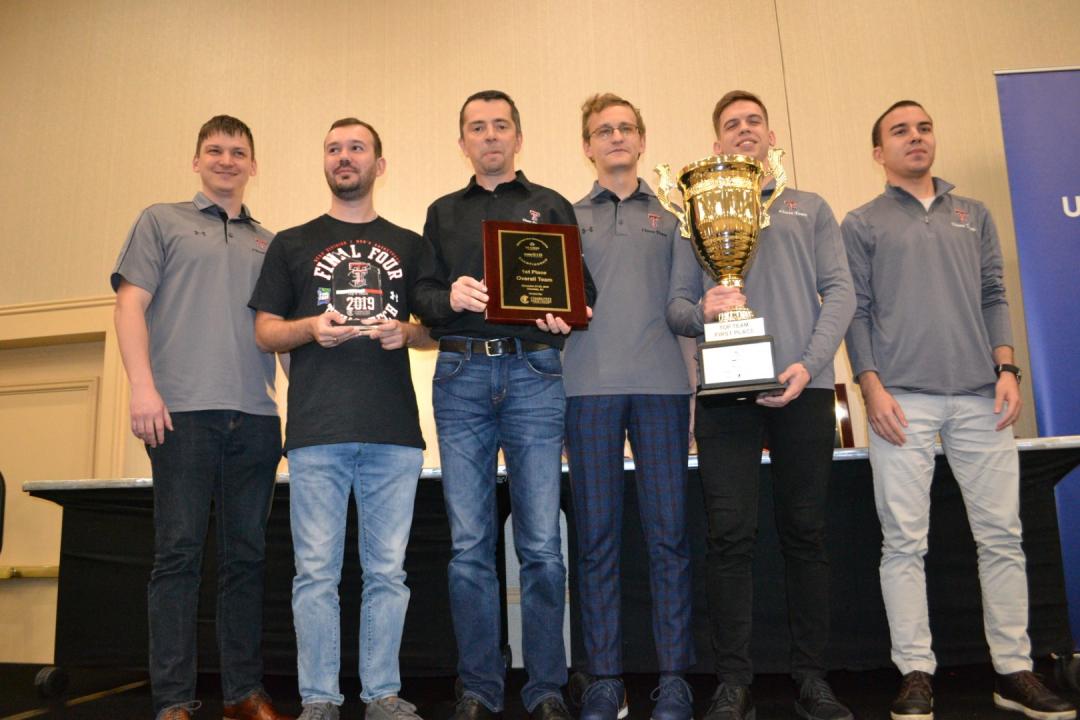 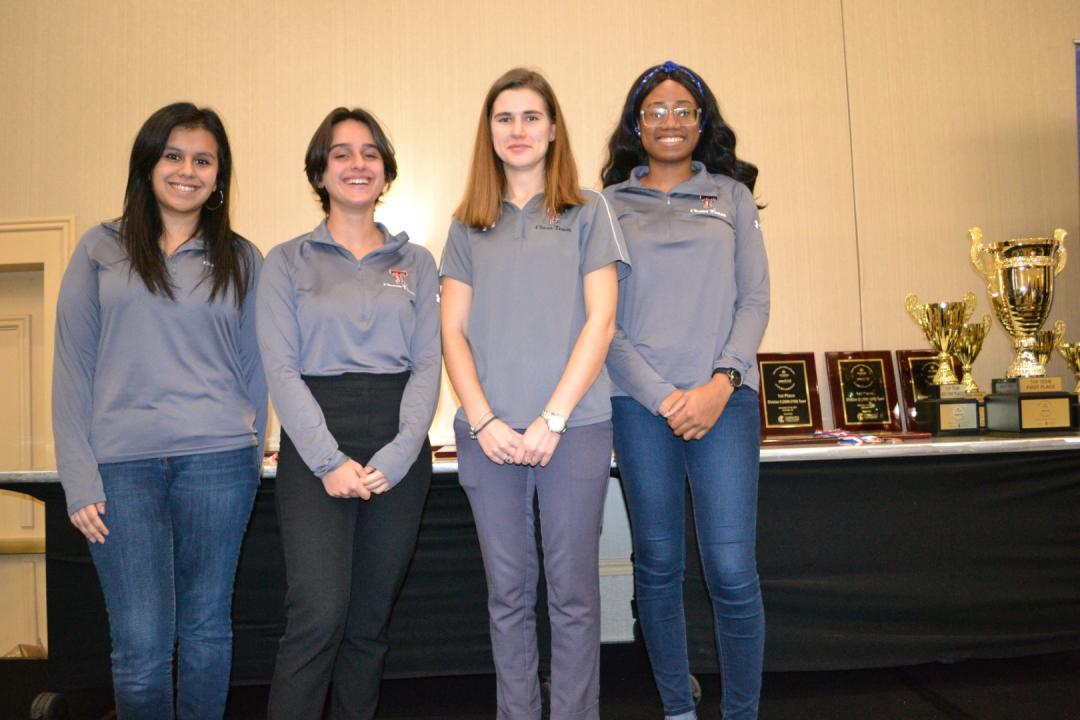 Texas Tech University, Webster University, Saint Louis University and the University of Texas at Dallas qualified to compete in the upcoming Final Four playoff, to be held the first week of April at New York City’s Marshall Chess Club. Peter Giannatos, founder and director of the Charlotte Chess Center & Scholastic Academy in Charlotte, North Carolina, organized the event, held December 27-30. Six-zero is the golden fleece of the crusade that is the modern Pan-American Collegiate Team Championships. Webster University found the magic back in 2013 in Lubbock at Texas Tech when there were 43 teams and five full-scholarship universities pulling up their drawbridges. This year, Texas Tech A managed the perfect streak among 63 teams and seven universities offering a full ride—sometimes, along with bonuses. (College chess is not governed by NCAA rules.) Saint Louis University began its chess program in 2015, Missouri just this year. In Round 5, when the top teams normally clash, Webster-A (4-0) was correctly paired with Webster-B (3 1/2-1/2) to avoid their playing in the final round. Four quick draws followed between Webster’s two top squads. Later in the round, Tech squeaked out a win against Saint Louis U.-A, spoiling the last remaining perfect score other than Texas Tech’s. The final round saw TTU-A (5-0) face UT-Dallas-A (4 1/2- 1/2) on Table 1. Tech’s victory on Board 2 was critical. After 22. Nf6+, Black could hold on, and, indeed, he was defending well until his 26. … Rxd3 left him victim to an irresistible kingside attack. Shtembuliak’s win tied the match with only Board 1 left playing, forcing GM Razvan Preotu to go hari-kari for a win against Tech’s GM Andrey Baryshpolets. Baryshpolets fended off the desperate attempt, confirming another 2 1/2-1 1/2 win for Tech-A. 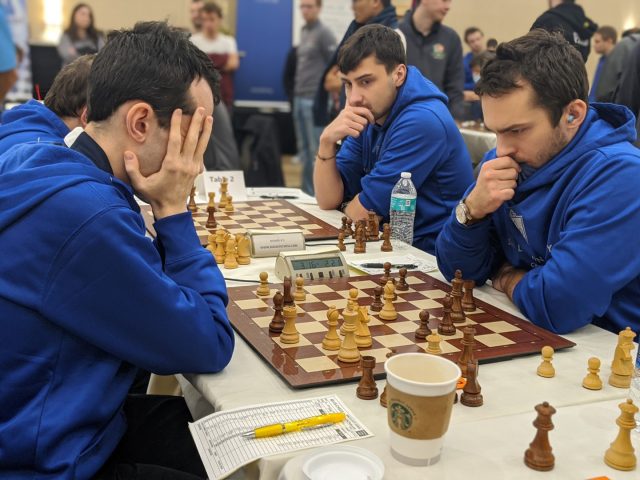 GM Lenderman, Webster’s new recruit, couldn’t hold the critical game against Saint Louis University’s GM Alexander Ipatov as GM Dariusz Swiercz looks on from Board 1. SLU-A finished in second place while Webster-A failed to qualify for the Final Four. But its C-team got a Webster foot in the championship door.
Texas Tech’s perfect score becomes even more creditable when you consider that the school is only one of two chess powerhouse colleges that offer just enough full scholarships to fill four or five chairs with titled players. Newcomer Mizzou, whose coach GM Cristian Chirila, popular on webcasts from St. Louis, only began assembling his gladiators in 2019. The other five powerhouse schools spread around enough lucre to enter multiple teams staffed with GMs, quite a competitive advantage at the PanAms, which are conducted as an Open, six-round Swiss tournament. This edge is then compounded once any of a university’s teams makes the cut-off for the Final Four playoffs, because the college can then choose whatever team composition it wants to send. For example, this year Webster qualified with only its C-team but has the right to bring its A-team to the New York City Final Four in April. That’s a possibility eliminated at next year’s PanAms. Reining in the arms race Rules changes are on the way that will rein in the arms race of multiple GM/IM teams among well-funded programs. First of all, a rule revision requested by the College Chess Committee this year was delayed until the 2020 PanAms, probably in order to allow adequate notice. The rule will, with some allowances for replacements and alternates, require the US university to send to the Final Four the same team that qualified. This year, that would have been Webster-C, a team with an average rating about 200 points below Webster-A. Even beyond this major change approved for next year, the consensus at this year’s official meeting of the College Chess Committee in Charlotte is to restrict colleges to only one team with an unlimited rating ceiling. Additional teams would be allowed only if their average ratings conform to a maximum not yet determined—but below a rating that normally qualifies for the Final Four. The rule would have to be approved by the College Chess Committee and US Chess, which would most likely then give multiple-year notice, since colleges have granted scholarships according to the current rules. The PanAms offer many division national titles and several special prizes. Here are all the prize winners in order of finish. Complete, round-by-round results and top games are available online at chessstream.com.

Princeton University-A, the 11th seed, was the only non-scholarship team to break into the top 20, and finished in a tie for 10th-19th with 4-2. Here are all this year’s teams that averaged above 2200 (based on their top four players) in the December US Chess rating list, and the top player for each.

The Pan-American Intercollegiate Chess Championships have been held every year since 1946. This year’s event was held, as always, under the auspices of US Chess, and for the first time in memory, its Executive Director, now Carol Meyer, was there to welcome players from all over the nation at the reception hosted by The Charlotte Chess Center. Sponsors included The Charlotte Chess Center, Susquehanna International Group, US Chess, the U.S. Chess Trust, and Chess.com. Credit for an exceptionally well-run event (now the tradition at the PanAms) goes to Organizer Peter Giannatos; directors Grant Oen, Glenn Panner, Rudy Abate and Maya McGreen; photographer Anastasia Wyzywany; bookstore vendor Thad Rogers; and College Chess Committee Chair Kelly Bloomfield. The University of Toronto, Hart House will host the 2020 PanAms, marking the fifth time the event has been held in Canada. The championships will be fought on the same dates as in 2019, December 27-30 and will offer a host of division and special prizes. A brand-new tournament will run side-by-side in Toronto—a separate women’s PanAms championship among two-woman teams. College chess players should plan early, making sure to secure their passports in plenty of time.

Please correct the college name for Division 2 and 3 winners. It is Arizon State University(ASU) not University of Arizona.
Right you are! Apologies for my error. We'll get this corrected. It was a real sweep winning both divisions! And I'll get this right in the CL magazine story.
“Princeton University-A, the 11th seed, was the only non-scholarship team to break into the top 20, and finished in a tie for 10th-19th with 4-2.” Really puzzled with what information you wanted to convey. There are a couple of non-scholarship teams that finished in a tie-break for 10th-19th with 4-2, why does Princeton-A deserve special attention?
Thanks for your comment. I could have been clearer. My first clause was addressing the initial seeding of the teams.
[…] Source link […]
Will the 2020 event be rated by USCF, CFC, FIDE, or all of the above?
Who was in the running to host the 2020 event?