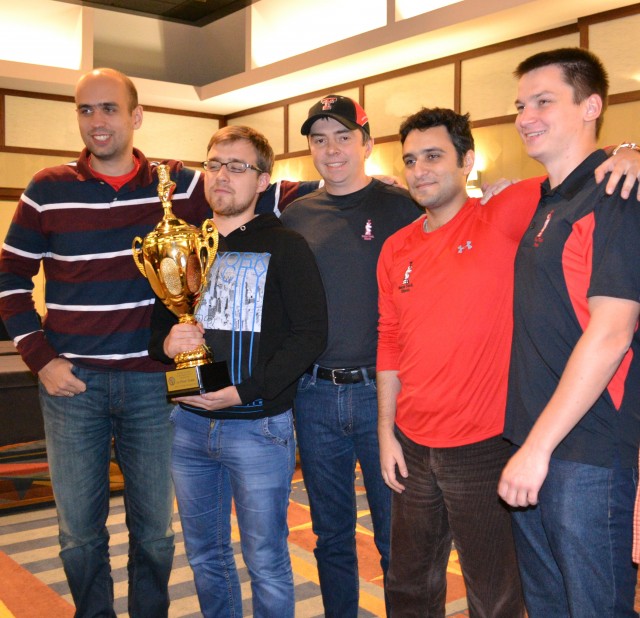 Texas Tech "A" accepts its first ever PanAms championship trophy. (l.-r.): IM Andrey Gorovets (4th board), GM Yaro Zherebukh (1st board) Head Coach GM Alex Onischuk, GM Elshan Moradiabadi (2nd board), GM Andriy Baryshpolets (3rd Board) When the Pan-American Intercollegiate Team Championships started the clocks for the sixth and final round at 9 a.m. on Wednesday, two squads led the pack of 42 teams. UT-Rio Grand Valley “A,” Webster “B” and UT-Dallas “B” had collected 4.5 points, drawing a match with each other the night before. Texas Tech went to the final match a half-point behind the leaders, along with with Columbia U. and Lindenwood. 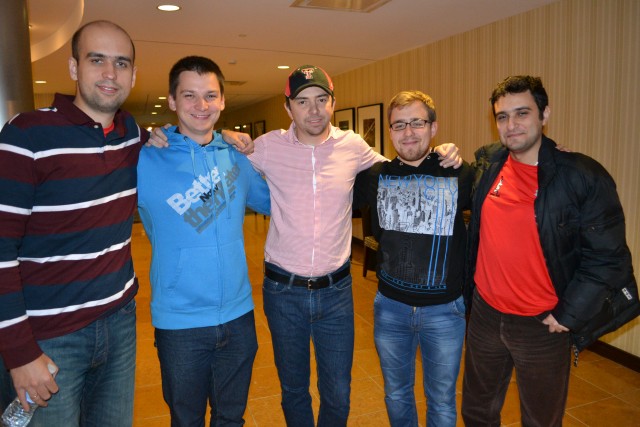 Texas Tech University after winning
Late the night before, the featured football game on the Sheraton Cleveland Airport Hotel’s in-room ESPN showed the Texas Tech Red Raiders collapse in a lop-sided loss against LSU. But the next morning, the Texas Tech Knight Raiders showed grittier resolve. While UT-RGV “A” and Webster “B” made draws on all four boards, Texas Tech put 10-time PanAms winner Dallas out of national championship contention with an impressive 3-1, no-loss finale. Columbia U. likewise scored a win, knocking Lindenwood out of the winners’ circle. So four teams tied with 5-1 and enter the record books as co-champions. But Texas Tech won the championship trophy with the highest tie-break points. After all, the Knight Raiders top squad had spent the whole event at the top tables, scoring four wins against highly rated teams and drawing matches against both Webster’s “A” and “B” powerhouses. When TDs Joe Yun’s and Boyd Reed’s laptops had finished their silent reckoning, the final pecking order sorted out this way: 1. Texas Tech “A’ 2. UT-Rio Grande Valley “A” 3. Webster U. “B” 4. Columbia “A” The four 5-1 schools made a tight pattern of candidates for their next target—the US college ladder, the Final Four of College Chess, to be held this April at New York City’s Marshall Chess Club. Tiebreaks for the national college chess championship playoff were gratefully unnecessary. “This was the toughest PanAms ever, and I’ve been to eight as player or coach,” Texas Tech Head Coach GM Alex Onischuk, himself a former US Champion and Olympiad medalist, said. “Our team knew we had to win in the last round. This year’s A-squad of Zherebukh, Moradiabadi, Baryshpolets, and Gorovets is really our dream team.”  Here's a game featuring Texas Tech's top board vs. the highest rated player in the competition, Liem Le. UT-RGV, a new college, goes to the Final Four in its very first year of existence. The school inherited the UT-Brownsville chess program, which hadn’t made the Final Four since 2010. Finding a meandering path through tornadoes and snowstorms, UT-RGV “A” had traveled all night, barely making the first round. “I think the difficulty getting here just gave us even more motivation,” head coach GM Bartek Macieja said. Notably, the University of Maryland-Baltimore County failed to qualify for the Final Four for the first time in the playoff’s 15-year history. Co-champ Columbia “A,” despite its 2340 average team rating, must have been considered a dark horse and deserves its hard-fought-for recognition. And Webster “A,” with an eye-popping 2747 team average, was certainly a surprise to finish out of the winners’ circle. (Final Four rules, however, permit each qualifier to field whatever team members it wishes, and Webster is in by virtue of its B-team’s performance.) Webster's downfall at the hands of University of Texas of Dallas's "B" team included a win from impressive grind from GM Nadezhda Kosintseva over Vasif Durarbayli. Another Webster-Texas Tech matchup featured Denes Boros of Webster B vs. Andrey Gorovets: The top six teams take home trophies. And other division titles are important at the PanAms as well. Many colleges brought home boast-worthy titles: 5th-place Team Webster University - A 6th-place Team University of Texas at Dallas - B Division I Champion (Team 2200 or above) University of Texas at Dallas - A Division II Champion (Team 2000 to 2199) Columbia University - B Division III Champion (Team 1800 to 1999) Texas Tech - C Division IV Champion (Team 1600 to 1799) University of Illinois - C Division V Champion (Team under 1600) UMBC - B Top Women's Team Webster University - Girls Top International Team University of Toronto - A 2nd International Team University of Toronto - B Top Small College Oberlin College Top Community College Miami Dade College Top Board 1 Manuel Leon Hoyos (Webster C) Top Board 2 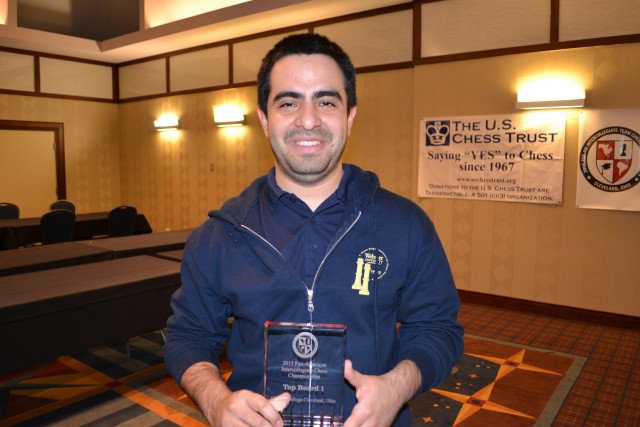 GM Manuel Leon Hoyos
Kyron Griffith (Columbia A) Top Board 3 Holden Hernandez (UTRGV A) Top Board 4 Ray Robson (Webster A) Top Alternate Carla Heredia (Texas Tech B) Biggest Team Upset University of Illinois - C Biggest Individual Upset Ajay Gudivada (Michigan) The championship is “Pan-American” because universities and colleges from North, South and Central America, as well as the Caribbean, are eligible to enter as many teams as they can muster. And, in case you’re wondering, every entrant, from GM to unrated, is a legitimate college student who must meet, among other prerequisites, the required course load and GPA. Every year, a subcommittee of the US Chess College Chess Committee examines university documentation to verify each player’s eligibility. The 2015 PanAms, a US Chess national event, was hosted by Oberlin College, who also won Best Small College for the third year in a row, and organized by its Women’s Tennis Head Coach and Chess Club Sponsor Constantine Ananiadis. Players and coaches praised the well-planned schedule and comfortable layout, featuring a play-where-you-stay venue with a walkway to the airport terminal. Chief TD Joe Yun, NTD Boyd Reed and Senior TD Kelly Bloomfield ran the competition without a single kerfuffle. 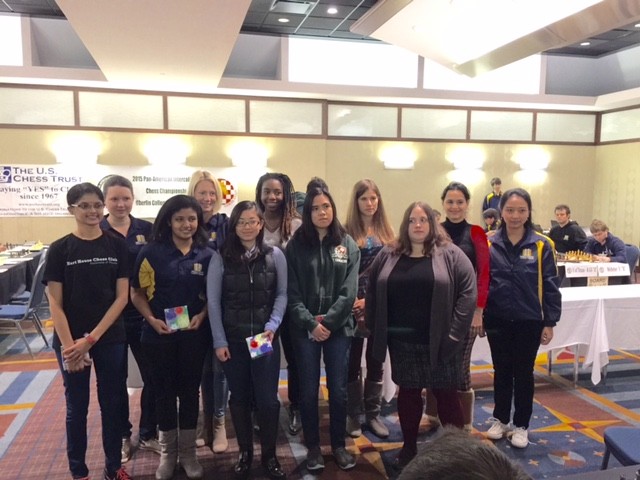 The female participants at the Pan-American Championship received a sweet gift of chocolates courtesy of Maureen Grimaud, co-chair of the US Chess Women's committee.
Early arrivers had the opportunity to play in the Ohio G/45 Championship on Saturday and the Ohio Blitz Championship on Sunday, before the PanAms first round that evening. GM Vasif Durarbayli of Webster won the G/45 and its $1,000 first prize. GMs Illia Nyzhnyk of Webster and GM Levan Bregadze of UMBC shared the $600 first prize in the Blitz event. More details, as well as the PGN file of top-board games are available at www.buckeyechess.com.
SHARE: