Tech Teams Battle in the Bay 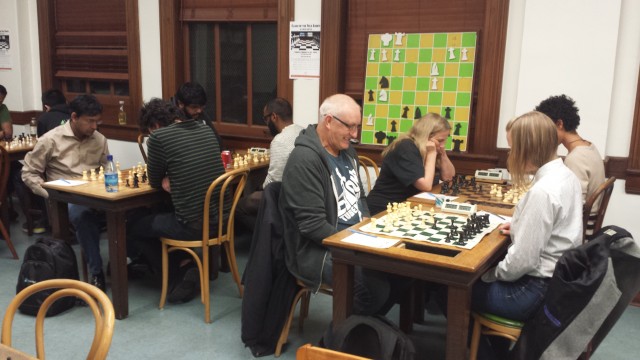 Europe is home to hundreds of leagues which are the heart of organized chess for amateurs and professionals all over the continent. While the United States doesn’t have anything comparable to Germany’s famous Bundesliga we do have the U.S. Chess League (played via the Internet for over a decade). For old school face to face chess there is the Chicago Industrial Chess League dating back to the late 1950s and New York’s Bankers League which was founded in 1917! Along the lines of Chicago and New York the Mechanics’ Institute of San Francisco is trying to form an employee based team competition in the heart of high tech. Thursday, February 18th, six teams met at the Mechanics’ in a prequel to a full-fledged league. The top team by rating was LiveRamp with near 2300 masters Tenzing Shaw and James Sun on the top boards. They defeated Dropbox, which fielded strong Experts and Class A players by a score of 3-1. Here are the top two boards from the match. All games were played at G/55 with 5 second delay. Other matches saw TubeMogul defeat The Hustle and Square beat Saleforce. San Francisco area companies which are interested in joining the new league are encouraged to contact the Mechanic’s Institute Chess Club at chessroom@milibrary.org.
SHARE: