Over the past years, the community of junior chess players in the United States has gradually grown much stronger. With stars like 17-year-old GMs Jeffery Xiong and Samuel Sevian paving the way for the youth movement in chess, there doesn’t really seem to be a limit. The U.S. Cadet Championship is a tournament held yearly for the top youths under the age of 16 to compete directly against each other. Along with the U.S. Junior Closed, the U.S. Cadet is one of the exclusive round-robin tournaments to showcase the young players in the U.S. For five of the past six years, the U.S. Cadet has been held in Maryland, however BayAreaChess, who recently was named the 2018 Chess Club of the Year by US Chess Federation, won the bid to host the 2018 championship in the West Coast. Out of the 8 participants, 3 of them were from California and the remaining 5 participants flew out to sunny Northern California to participate in a classical round-robin over 4 days (July 12-15) held at the BayAreaChess Center in San Jose. 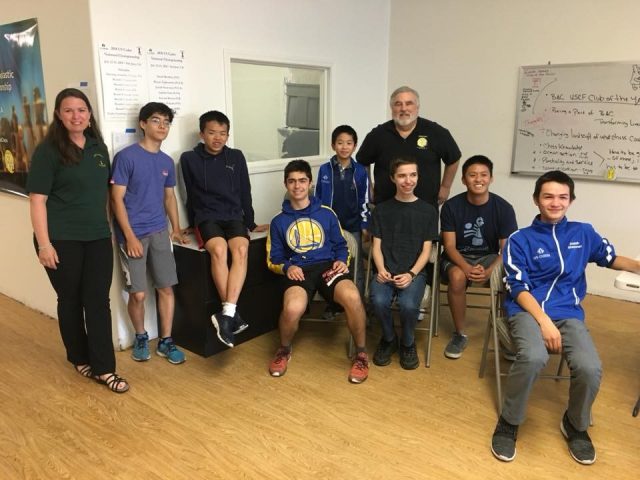 In rating order, the players (pictured above) were IM David Brodsky, FM Rayan Taghizadeh, FM Josiah Stearman, NM Gabriel Sam, FM Aravind Kumar, CM Akira Nakada, CM Jason Wang, and NM Max Li. All the competitors were masters; the field had an average rating of 2347. Three of the eight participants were from California, with Norcal-based Taghizadeh and Stearman both regulars at BAC-run tournaments. At the opening ceremony, held on Thursday, July 12, BAC coach and US Championship competitor, GM Zviad Izoria, and WIM and FIDE zonal President Ruth Haring drew lots to assign pairings. 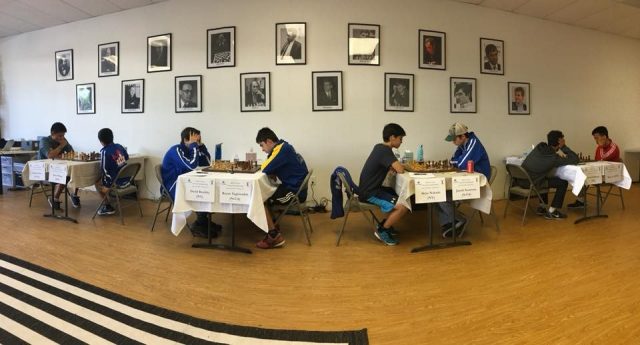 Check out the tournament videos and more pics at our Facebook page.
FM Josiah Stearman held the lead initially, storming out to a perfect 3-0 start. However, Josiah’s round 4 loss to his closest competitor and top seed, IM David Brodsky, followed by a second loss to Gabriel Sam, essentially cost Josiah the chance to win. The game is annotated below. Heading into the final day, the distance between the rest of the field and David was 1.5 points, an improbable amount to overcome, but not impossible. In fact, David lost the penultimate round to FM Aravind Kumar. With his win and David’s loss, Josiah surged back into contention. However, the comeback was not meant to be. David secured the title of 2018 U.S. Cadet Champion with a final round victory over FM Akira Nakada, taking home $2,000 for his efforts during the weekend. Read Brodsky’s account of his victory. Josiah finished second ($1,000 prize) after drawing his final round versus CM Jason Wang, and NM Gabriel Sam, who played solidly throughout, claimed the third prize (and $600). In this round robin tournament, every round had at least two decisive victories. Only 25% of the games ended in draws – much lower than the 50%+ rate of draws by GM-level players - making it an exciting tournament to follow. Detailed results with downloadable PGN files of every game can be found at the event website: www.bayareachess.com/cadet18. Many photos are posted on BAC’s Facebook album. On behalf of BayAreaChess, co-author and BAC executive director, Judit Sztaray thanks all of the players and their parents for making the journey and showcasing their fighting spirit. In addition, much credit is due to Chief TD NTD John McCumiskey, who was assisted by Senior TD Damian Nash and NTD Thomas Langland, for ensuring that the tournament ran smoothly. It’s with excitement that we say: see us next year! BayAreaChess has been named the organizer of the 2019 US Cadet Championship, and the tournament is set to be held right after National Open. More information is available here: http://www.bayareachess.com/cadet19. For questions, and feedback, please reach out to co-author and organizer Judit at ask@bayareachess.com.
SHARE: