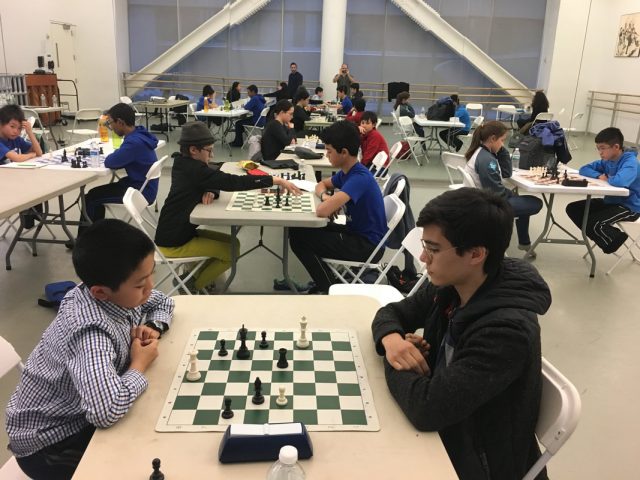 The US Chess School in New York in session! Photos by USCS founder IM Greg Shahade
Over the board, we search for time, harmony, and space. In New York City, all three of these are elusive . . . especially space. So my question to you is: what is better than a US Chess Camp in New York City? How about a US Chess Camp in a Modern dance studio in New York City? While dancers were practicing their moves in the other studios, we were practicing our moves over the board. Is chess an art? A sport? A dance of sorts? Needless to say, we fit right in! US Chess School Camps never fail to come through as my most exciting and productive training sessions. Because the camp was during spring break, our ability to completely focus on chess made learning that much more possible -- and for me, fun. There were twelve of us that were lucky enough to attend the camp. You can see our chess mug shots below! 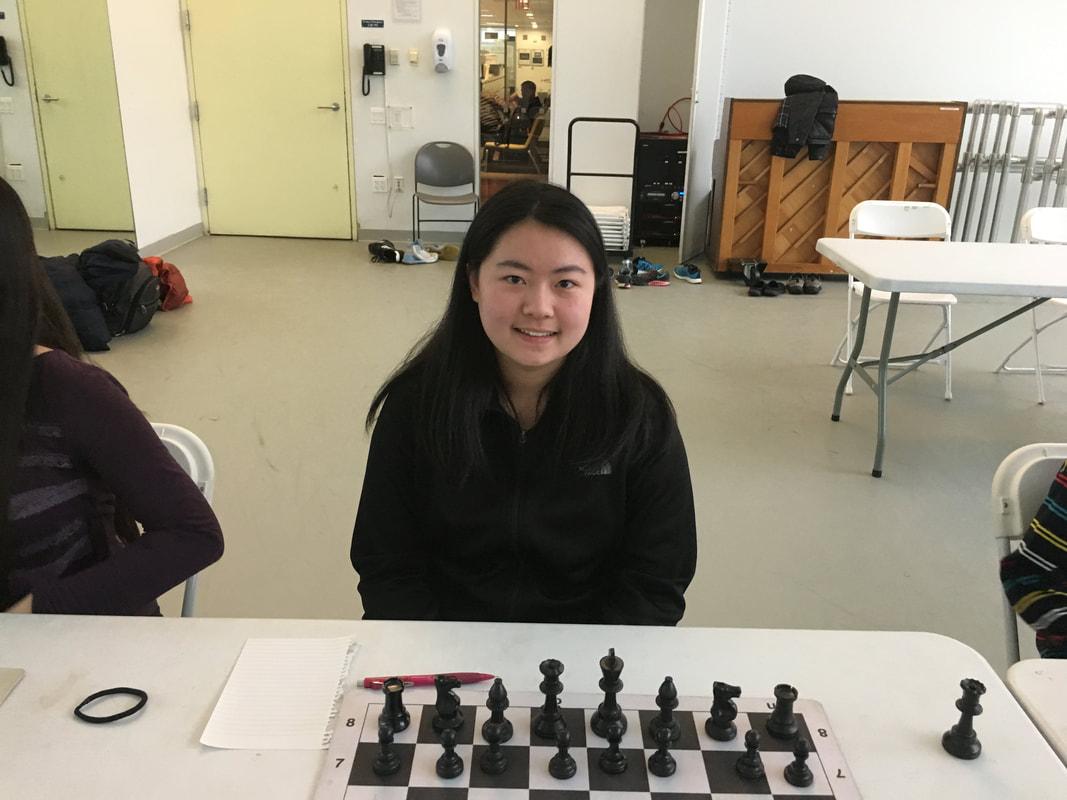 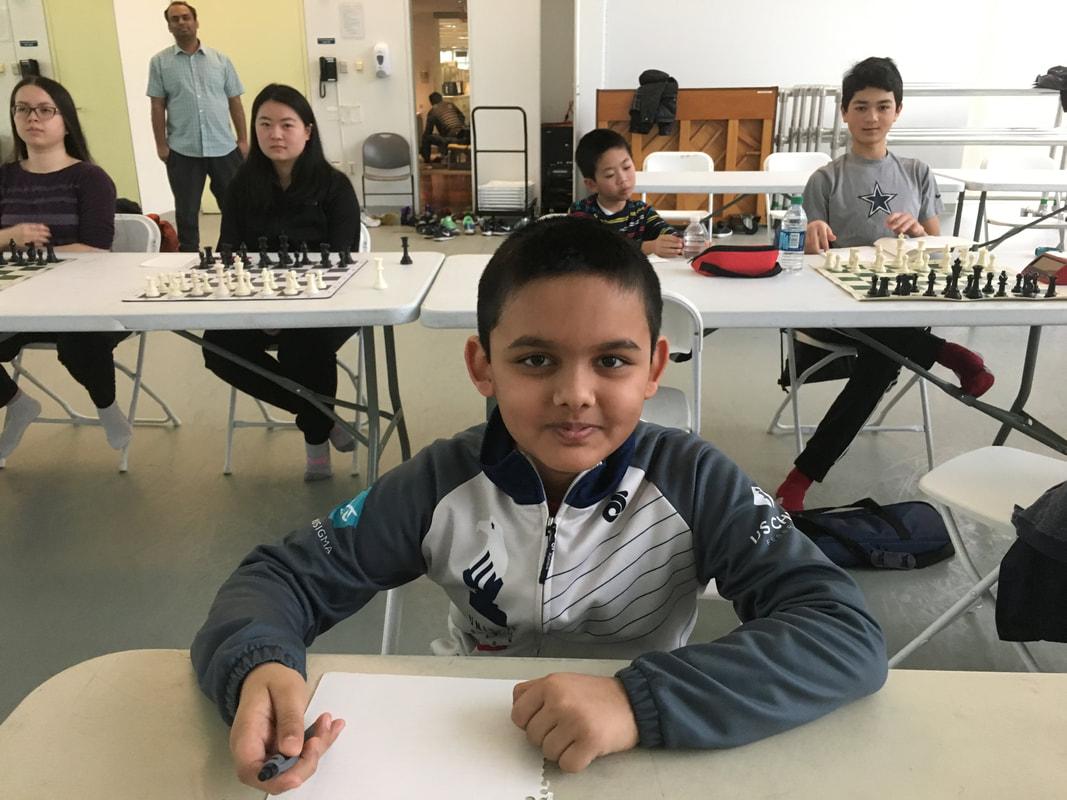 Abhi Mishra, the youngest US Chess master in history 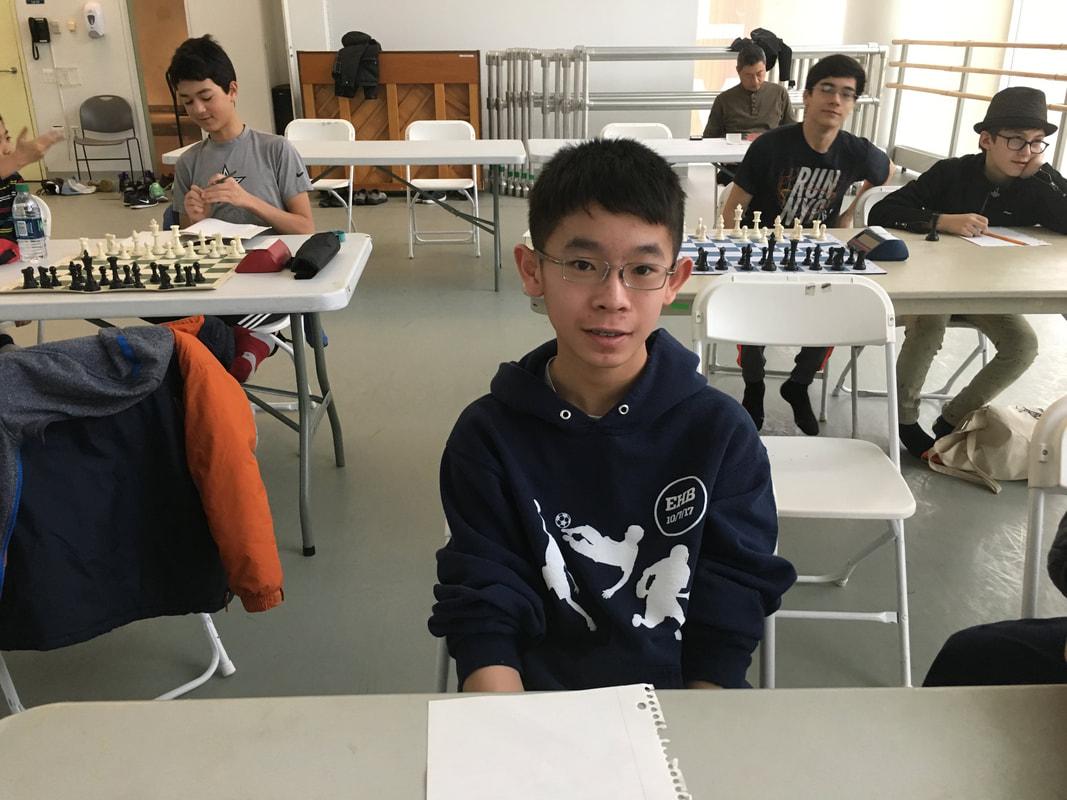 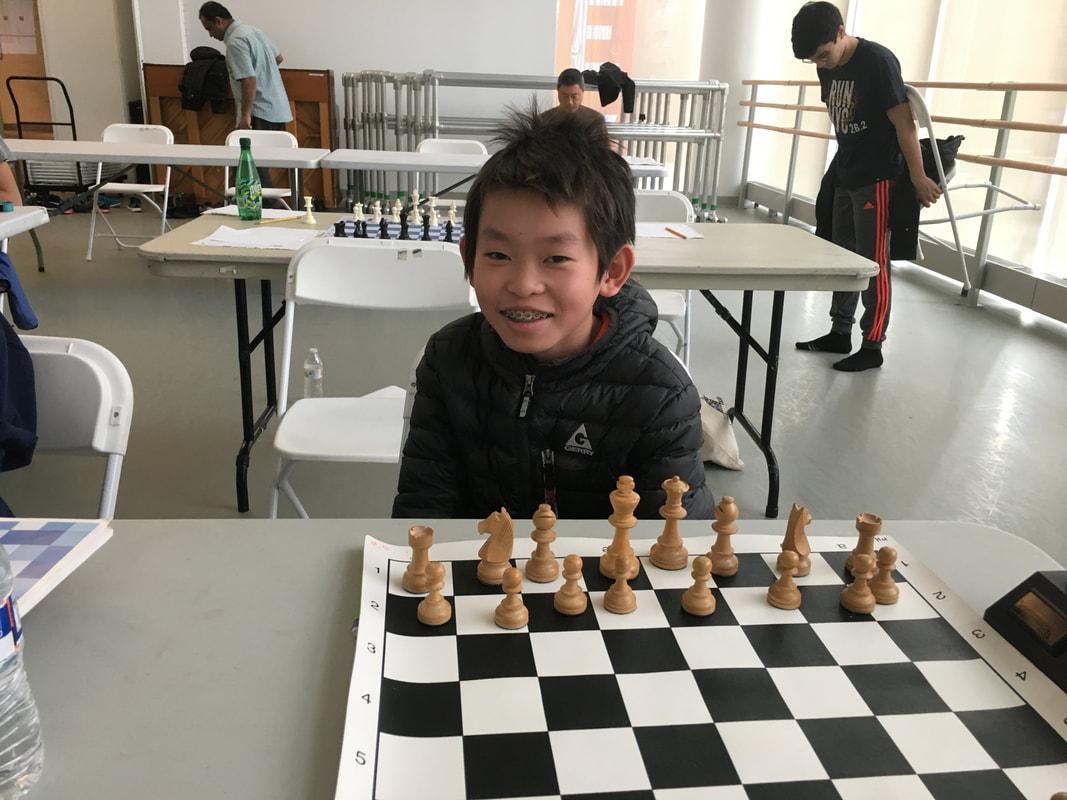 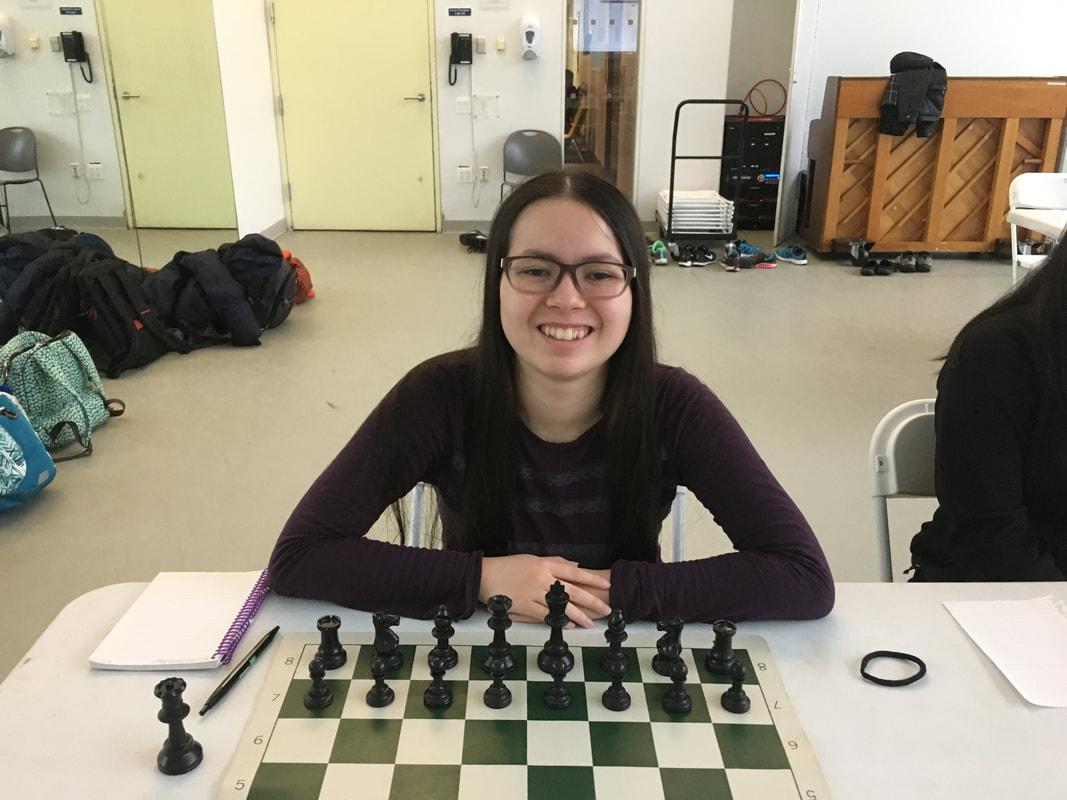 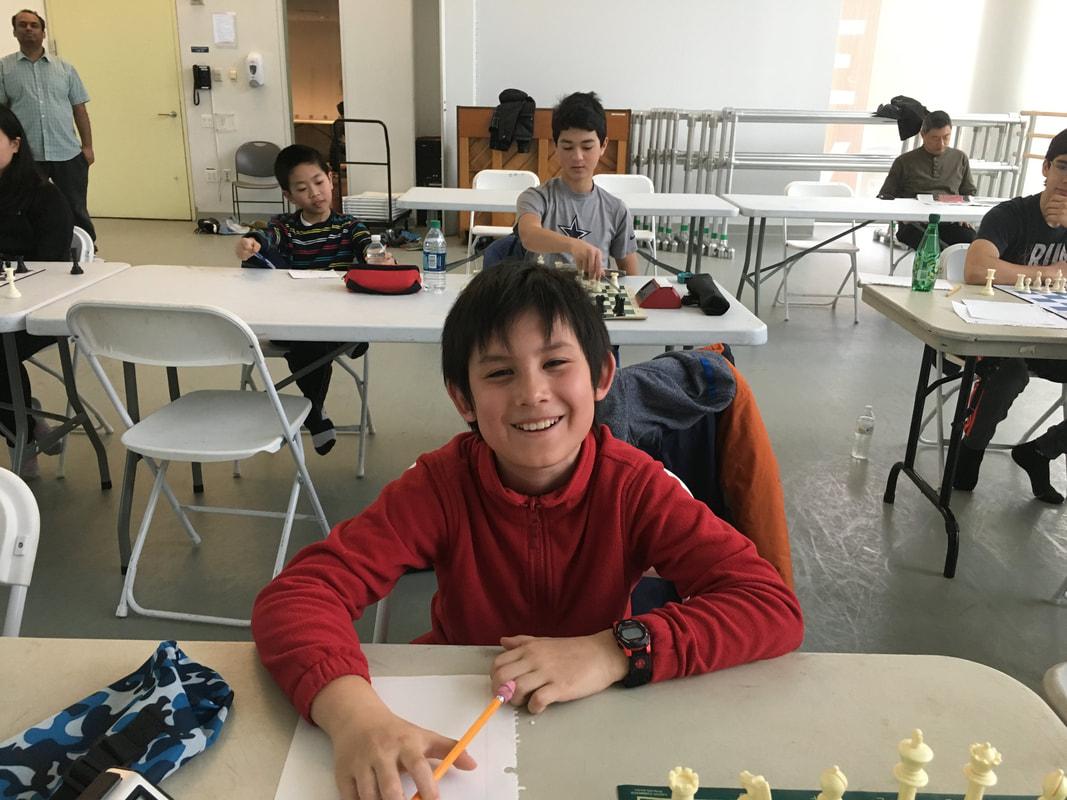 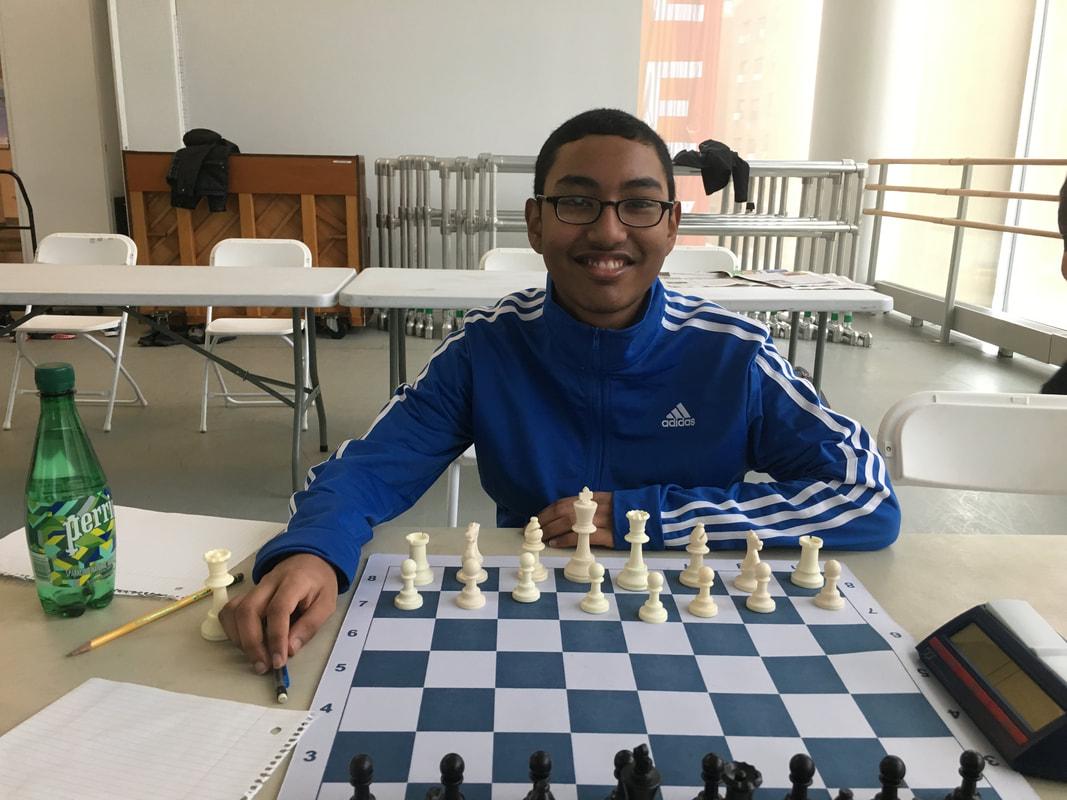 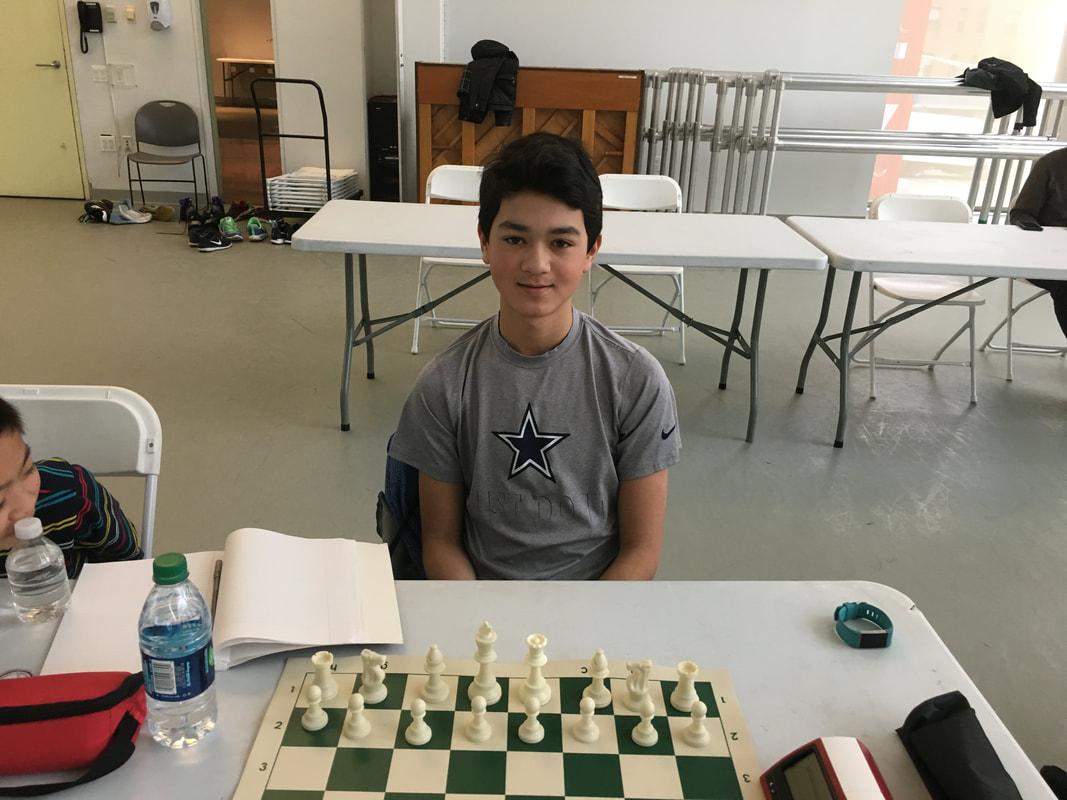 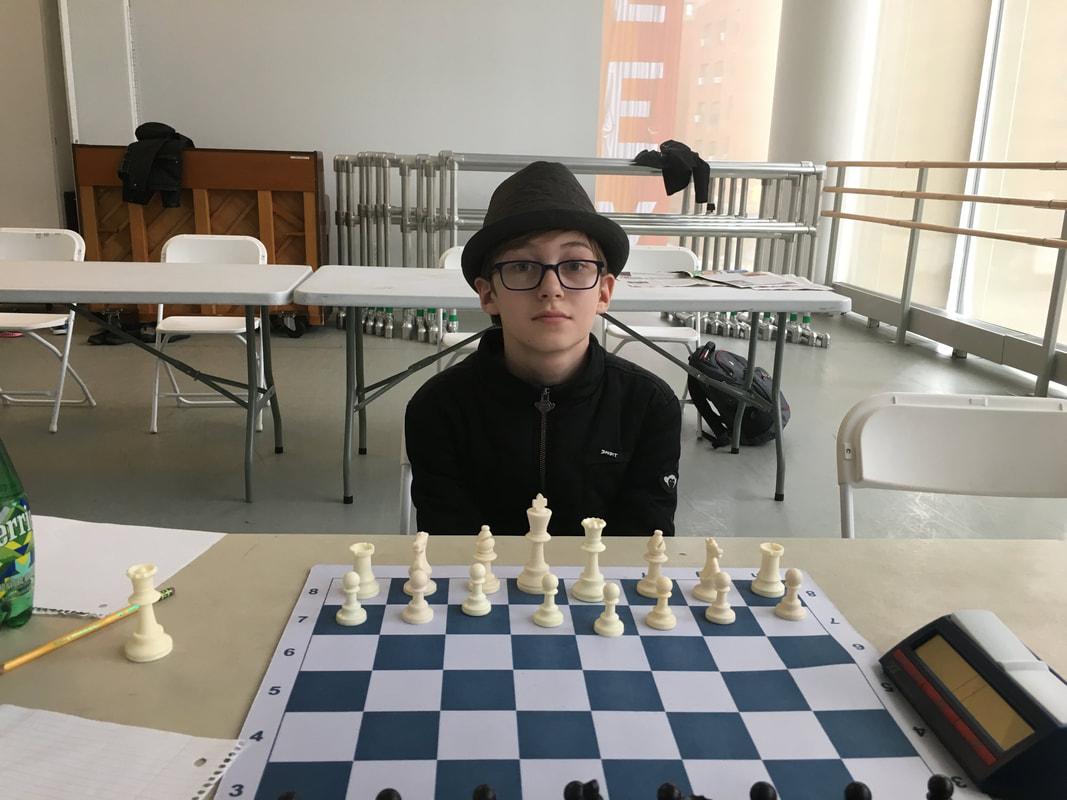 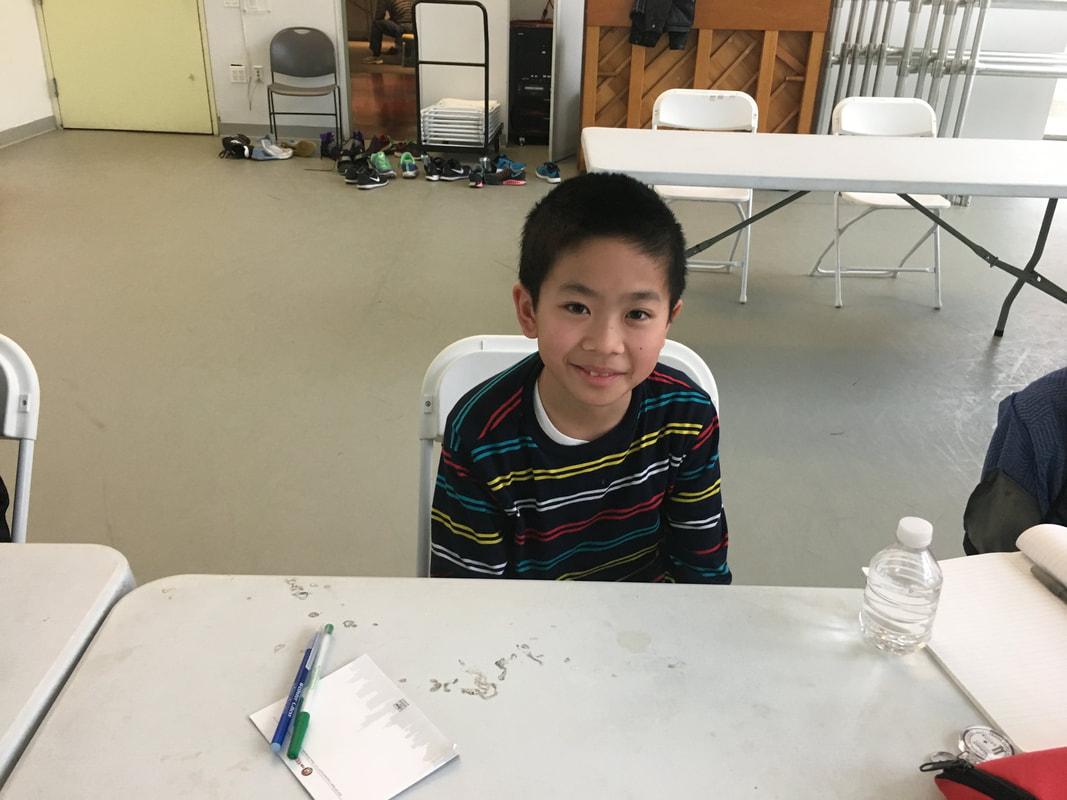 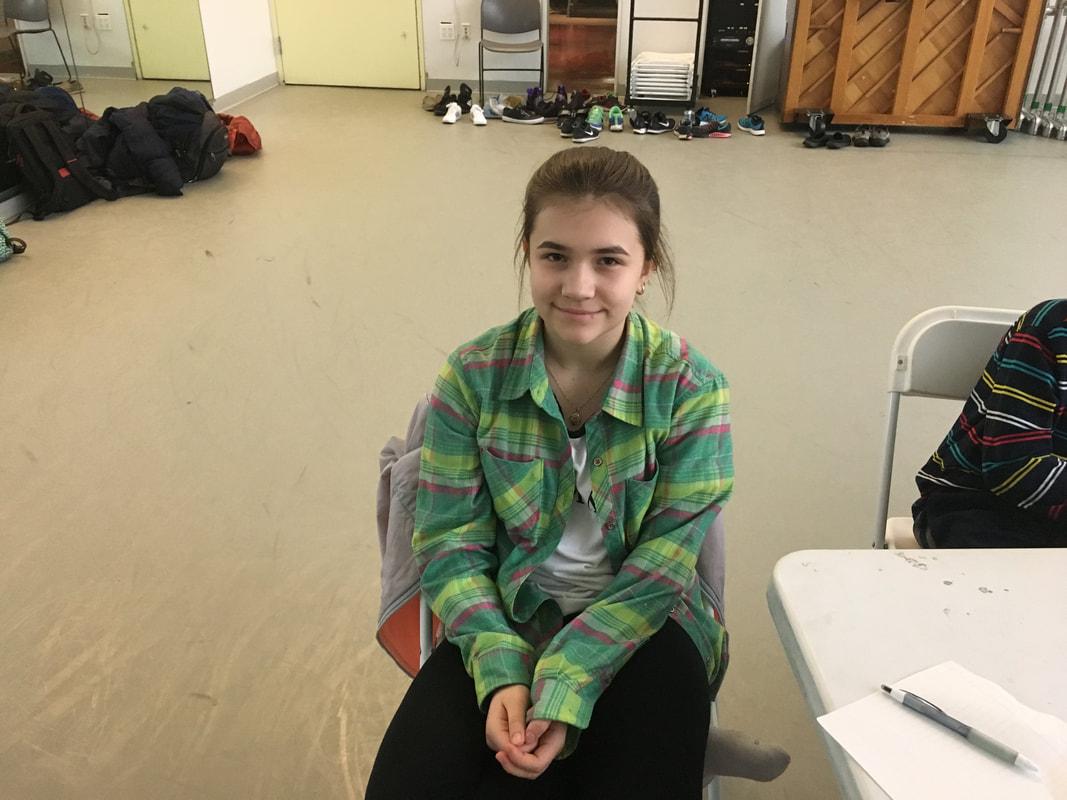 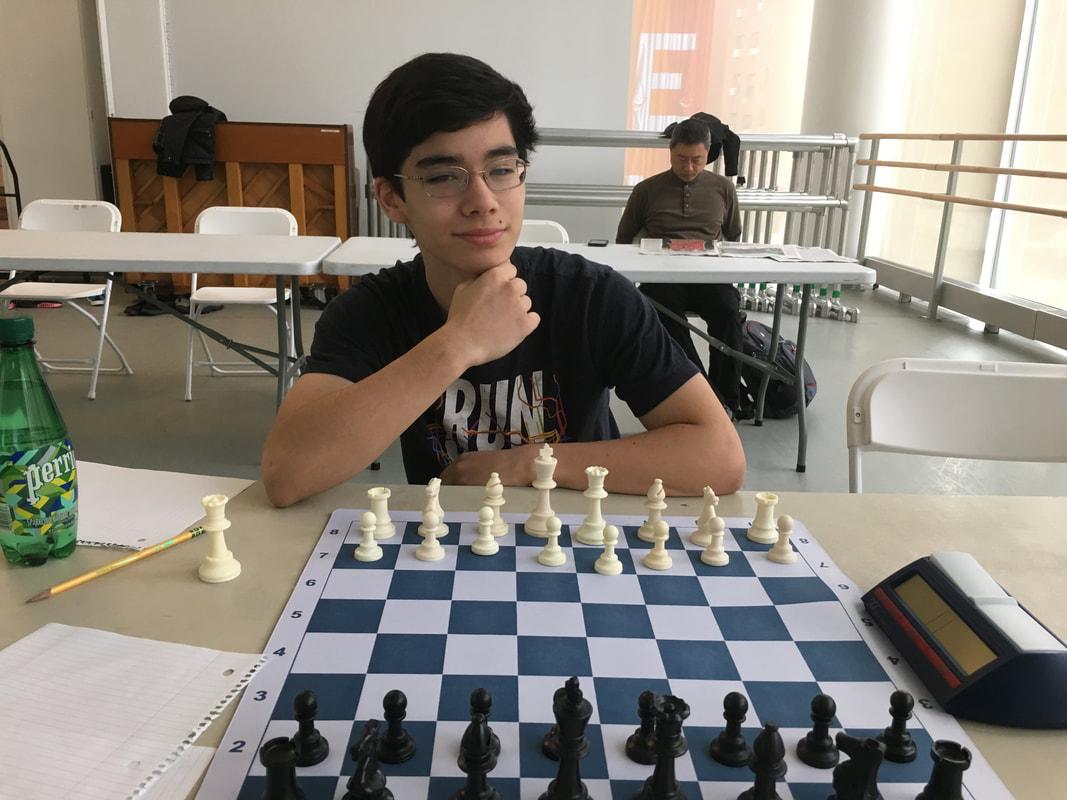 Akira Nakada
The main coach for the camp was IM Alex Ostrovskiy, who attended the camps about ten years ago himself. Greg Shahade was kind enough to organize this camp and contributed intuition tests (which I discovered I need to get a lot better at). Out of many camps I’ve been to, this one stood out the most. The typical chess camp focuses on learning and practicing calculation, tactical and positional play through common chess knowledge and concepts such as prophylaxis and weak squares. While still covering all of these essential concepts, what set this camp apart from the rest was the novel approach that our coach IM Alex Ostrovskiy took. While he taught us high-level theory, he taught it in a way that was more practical and useful than most books you can read. I’ve heard many times that a bad plan is better than no plan at all. Obviously this is not a rule that is set in stone, and in many cases it is not true at all, however the logic behind it is correct. Having a sense of direction in the game, and an idea to execute throughout the following moves is a crucial part of the game. In my personal experience, having any kind of plan gives me a sense of confidence and optimism in my game, even if I am slightly worse. However, it is easy to forget the difficulty of coming up with a plan. Many times, I find myself in a game making pattern moves without any sense of direction, and letting my opponent dictate the pace and flow of the game. Especially in critical moments, where the tide of the game can be decided within the next couple moves, having a plan is extremely important. The first lesson at this U.S Chess School dealt with this problem directly. In his book Positional Play, GM Jacob Aagaard addresses this issue, advocating for a three point plan that consists of the following questions: This list of questions can prove to be extremely helpful in critical moments throughout your games. Based on experience with his students and his own game, Coach Ostrovskiy expanded on Aagaard’s list and created a new five point plan by adding two more questions: 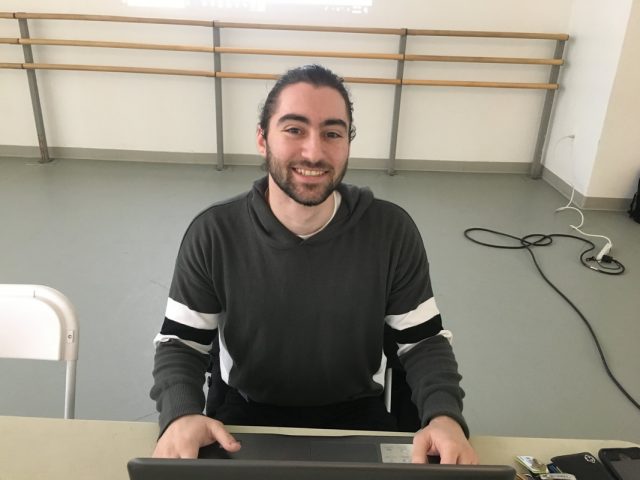 Coach IM Ostrovskiy
He then showed us how to apply this five point plan in a number of example games. Many players, including myself, have thought of this kind of mental checklist as useless and impossible to remember in a practical game. However, after seeing its practical application and forcing myself to use it in game, I’ve come to appreciate the power of the five point plan. This first game is a practical example of the five point plan. Step five in the five point plan is to identify the essential element of the position. Coach Ostrovskiy illustrated how he identified black’s dark-squared bishop as the essential element.With this information we can understand how he found 15.dxe5 and 16. g4. Another interesting try here was 15.d5, however black has ...Bd8 and ...f5 there with the plan of activating the bishop.  Aleks showed us another interesting position from one of his losses: Keeping in line with Ostrovskiy's nontraditional way of studying chess, the focus of the lessons on the second day of camp was playing equal positions. We all know the feeling of frustration when a lower-rated player is playing only for a draw against us, or has a seemingly unbreakable position. This lesson focused on playing (and hopefully winning) these equal positions. Coach Ostrovskiy showed us that the key to playing these positions was patience. At the rating level of us campers (2100-2400), lower-rated players will almost always make small mistakes that give us chances. Nobody is perfect, so with more or less accurate play, we can capitalize on these small mistakes. Additionally, it is important not to dwell on your frustration, but to maintain a positive attitude while playing out these positions. The key is to look for any plus in your position no matter how slight, because this will encourage you to keep playing with energy and enthusiasm.

20 ...h5! Play through the full game with explanation below.
This game perfectly exemplifies the concepts talked about above. The resulting endgame from a popular Caro endgame is pretty much +0.00. However, black slowly gains the psychological initiative by maintaining a positive attitude and acting with energy, until finally the lower rated opponent makes an unforced error with f4 -- which ultimately costs him the game. It’s funny, however, that while you try these techniques out on lower rated opponents, players 100-200 points higher than you are doing the exact same thing to you. 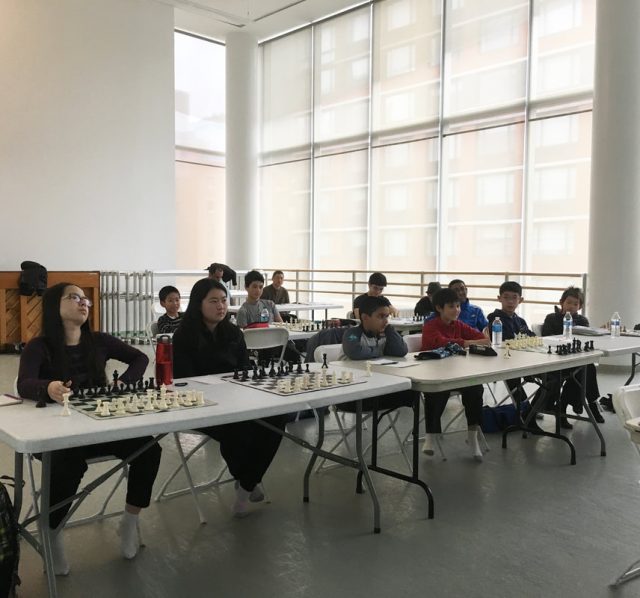 This game is a good segue into the next topic of discussion, stewing and lulling, two terms that Aleksander Ostrovskiy introduced to us. Stewing means letting your opponent marinate in his worse position until he makes a mistake. Lulling is a similar but slightly different concept in which in order to win a slightly better position that is objectively drawn, you make tons of moves in order to lull your opponent into a sense of false security -- and then strike. These techniques are especially good for winning those annoying endgames where you’re slightly better but can’t break through. Ostrovsiky- Khamrakulov [fen]r3k3/pp1n1ppr/2pbp2p/1q5P/3P2Q1/5N2/PPPB1PP1/1K1R3R w q - 0 17[/fen] I spent a ridiculous amount of time on this position. I came close to finding the best plan but failed to grasp all the details. How should White continue? In your analysis you need to figure out the 'essential element of the position.' Here we’ve reached a position where white is objectively +0.6 better, but it is extremely hard to break through. In this game white uses both techniques to obtain a winning position (although he blundered in the end and drew). The last days of our camp were focused on the idea of pawn structures. Out of the opening, both sides have to come up with plans and pawn structures are typically key parts of understanding what to do. In our lessons, we focused on several common pawn structures including an extremely important and recurring structure that arises from the Ruy Lopez and some Anti-Sicilians.

Show Solution
13. b4! Here cements white’s advantage as it makes the a5 knight very passive, and creates the b5 weakness after white’s a4 break, the rest of the game is instructive.
This particular pawn structure helped white gain an advantage and come up with a plan out of the opening. This knowledge served Coach Ostrovskiy in many subsequent games:

Find a move here for white and a subsequent plan

a4!
This game was also a critical game in the U.S. Junior Championship, which shows the power of understanding pawn structures. Of course there was the time-honored tradition of the blitz and bullet tournaments. I really wanted to win this one since my previous best was to make it to the third round, and I was the highest rated camper this session. I’ll let you see for yourself how the tournaments played out. The links to the videos are below: Blitz: Bullet: The end of any U.S Chess School is a sad moment, but looking back on how much I learned during the camp made me excited to play tournaments and test my newly-acquired knowledge in real games. Chess training, or at least my training, can take on a pattern of doing tactics and looking at lines on ChessBase. It was refreshing to step back and take a look at completely new, yet surprisingly useful concepts. Stewing, Lulling, “The Five Point Plan,” and understanding Pawn Structures have renewed my enthusiasm in playing and studying chess, as I hope it will for all of the readers here.  The U.S Chess School was once again a highlight of my year and I look forward to coming back for the next one soon! I would like to thank Dr. Jim Roberts and the sponsors of the U.S Chess School who make this experience possible, and of course our coaches IMs Greg Shahade and Alex Ostrovskiy. To apply for an upcoming session of the US Chess School, click here. Spots are still open for the All-Girls Chess Camp in Saint Louis July 23-26, and the San Francisco Camp from August 6-10.
SHARE: