Stepping Stones to 2500 at the U.S. Chess School 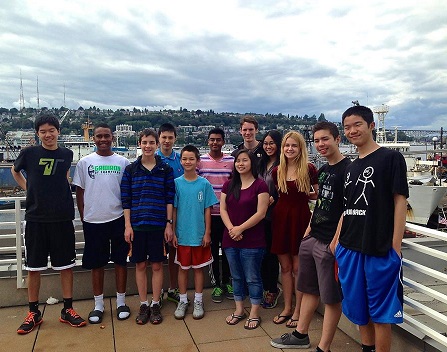 Above the beautiful Seattle waterfront, 12 promising young players congregated with chess sets, clocks, and some notebooks. Aside from some Blitz and Bughouse, there was no tournament here. Instead, we gathered to train and collaborate for an intense, but exciting four days. When I heard that the U.S. Chess School was coming to Seattle, I have to say I got a little excited. I knew it was a rare opportunity and as a high school senior this may be my last chance to attend. I'm glad I got to learn and improve in the camp. Each morning players could breathe in the cool air by the Seattle dock or take a little stroll around the bay. This was really refreshing - witnessing the calmness of the surrounding atmosphere. When training began, however, the scene intensified. The group included Aaron Grabinsky, Bryce Tiglon, Joey Kelley, Samir Sen (yours truly), Agata Bykovtsev, Kyle Haining, Megan Lee, Noah Fields, Samuel and Daniel He, Becca Lampman, and Josiah Stearman. With an average rating above 2200 from four states, the playing strength of the camp was high. Aaron, an Oregonian aged 17, was the highest rated player at the camp at 2338. Often during class, Aaron came up with interesting ideas in complex positions. He loves the French defense. Bryce (age 15, 2306) is a resident of Seattle. He has been a member of the all-American chess team and represented the United States in the 2012 and 2014 World Youth events. He's an ardent soccer fan. Joey was an interesting participant in the camp because he was the only person from Kansas. Recently awarded the National Master title, Joey is the 4th highest rated player in his state overall and this includes adults. I (Samir) am a master from Vancouver, Washington and will be attending Stanford this fall. It was my first time at the chess school. Recently, I won the 12th grade National Championship in Florida. Agata (age 15, 2172) has an impressive history of chess achievements. From Southern California, she most recently competed in the Women's U.S. Championship. Aside from winning gold and silver medals respectively in the 2014 and 2015 Pan-American Championships, Agata enjoys surfing, math, and playing the violin. Kyle may have been one of the youngest in the group but his chess experience was not limited. He's a 4 time scholastic state champion and he holds both the 2012 K-6 and 2015 K-9 National Blitz titles. Megan was the oldest member at camp. Aged 19, she will be a sophomore at the Rhode Island School of Design studying Industrial Design. I noticed that while Megan was one of the most composed and thoughtful participants, she was by far the best Bughouse player at the camp. Everyone was jumping in to be partners with her! 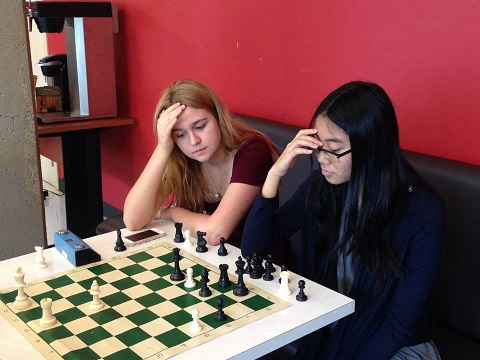 Noah (age 15, 2104) recently won the Washington State HS Championship and will be representing Washington at the Denker tournament. He plays an array of sports, including varsity football and basketball. Samuel and Daniel He are identical twins from Seattle. At first, Greg expected them to give similar responses to puzzles analyzed in class. But, soon enough we found out that each had their own distinct flavor. Both strong masters, I would advise watching out for these dynamic twins. Becca is also from Vancouver. She won the U18 All-Girls National Championships earlier this year and is going to college next year. She says she will continue to be actively playing through college. Lastly, but not least is young Josiah Stearman. Aged 11, Josiah was the youngest member at camp. He brought a youthful optimism and playfulness that always lightened the mood and he gave us cool insider tips into a variant chess called "Decline Chess". Josiah is already rated 2137 and he came to camp ready to take his game to the next level. Stepping Stone #1: Intuition training and enhancing creativity 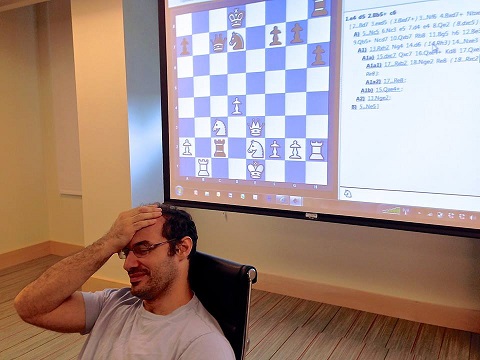 Over the four days, we received instruction from IM Greg Shahade, IM Giorgi Orlov, and GM Gregory Serper.  In the beginning, I was not so sure how much I could improve in the limited time. But after soaking in the lessons and advice, I realized that learning about the steps I can take to become a stronger player was most important. The chess school provided concepts and ideas to work on and adopt, which can help developing players break through to the 2400 and 2500 levels. We start with a unique training exercise that stretches your intuition. This time our coach was IM Greg Shahade. Intuition Puzzle [fen] r1bq1r1k/pp3pp1/2n5/2bNp1p1/2P5/P2BPN2/1PQ3PP/2KR3R w - - 0 1[/fen] Show Solution

[ After going over the answers to the 60-puzzle intuition test, we encountered this interesting and very complex position. Endgame Composition [fen]8/3R4/1b2N3/7p/6k1/8/P3pP1P/6K1 w - - 0 1[/fen] Show Solution The take away was that sometimes the craziest ideas are worth considering, especially in high stakes situations. Studying positions like this can help players broaden their vision and become more creative when it comes time to show an opponent what you're made of. Stepping Stone #2: Study the games of great chess players 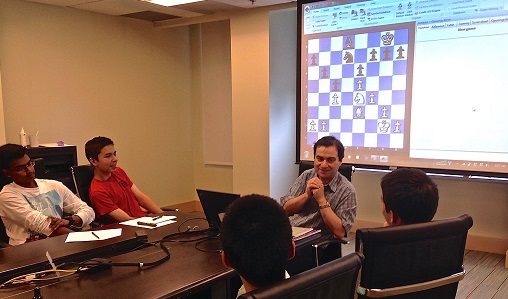 The next lecture was taught by GM Gregory Serper. Once a contemporary to the top 10 in the world, Serper's lessons were unique as he did not focus any specific strategic concept. Instead, he recounted stories about the critical moments in his chess development and related them to us. He brought with him his antique notebooks, filled with analysis he had done decades ago when computers were a rare availability. At one point, one of us asked what his favorite part about chess was living in Russia. He recalled that he enjoyed studying with Kasparov in the Botvinnik - Kasparov School for talented youth. All of this helped us gauge a more serious approach to chess and also made us feel privileged to be training where we were. Throughout the lesson, Serper emphasized the importance of studying other players' games. He started with the following example. Found in his local newspaper, Serper had initially analyzed this game just for fun. Then, he became intrigued with the final result. Stepping Stone #3: No plan is worst of all Like Serper, IM Giorgi Orlov gave us a lesson about keeping a strong mindset in chess. While Serper talked about professionalism in studying and improving, Orlov demonstrated what it means to have a plan. This lesson was instructive to me as most players would agree to a draw relatively quickly from the initial positon. Seeing how Anand followed a simple plan and caused his opponent (who, conversely, had no plan) significant problems motivates me to play for the win no matter how drawish a position may seem - and, of course, to always have a plan. Stepping Stone #4: Openings might be important after all The last thing we talked about was how to approach openings. Earlier in the camp, Serper explained that at our level, openings should account for approximately 20 percent of our chess study and the rest should be utilized to improve tactical vision and of course, study the games of world champions. Greg Shahade, however, slightly disagreed. He claimed that opening work should account for 20 percent only once a player already had a solid repertoire. And thus began our discussion on how to achieve a fighting position out of the first 10 - 15 moves. As we analyzed our individual games from recent tournaments, Greg noted that some of our opening choices would not stand up very well against players at the IM level and higher. We either tried to avoid main line continuations and opt into not-so-established pet lines or entered into uncomfortable territory where our higher rated opponents were simply better prepared. To fix this problem, Greg showed us what he does to prepare. In any opening, Greg usually looks at least 10-20 related games played by strong players to get a feel for the positions. Then, ChessBase or a similar program is necessary. Greg showed us a way to create a separate reference database containing the games of all players rated above 2400 from the past 3 to 4 years. Using the reference, we took a look at what the most popular continuations in a few openings are. What we found was that studying these popular lines will lead to positions that are sometimes dynamic and sometimes more solid, but they will always produce positions that allow some nice, fighting chess. To remember these lines most players play many Blitz and Bullet games online. But if you're a fanatic (like Greg), you can download the notecard app on your smartphone and quiz yourself on key positions. Thanks And so there they are - four concepts to work on to breakthrough to the next level. I would like to thank Greg Shahade for organizing this edition of the U.S. Chess School in Seattle. The event wouldn't be possible without the support of Dr. Jim Roberts and the Scheinberg Family and I would like to thank them as well for sponsoring and hosting us in the humble Matrix Genetics. On a personal note, I want to thank everyone who has supported me through my chess endeavors, especially my parents and former coach, Gregory Serper. Without them, I could not be wherever little I am today. So as the sun set over the misty shoreline, the camp concluded and 12 young players receded back into their homes. But alas, their fun was not over - they gained a new-found inspiration, a drive to reach new heights. And that was the beginning of a new adventure. 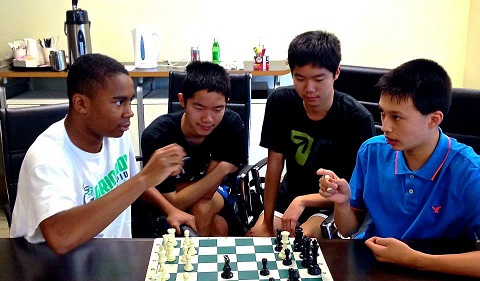 Find out more about the US Chess School on their website , Facebook page, target="_self">YouTube Channel and also see David Brodsky's article on another USCS session this summer, in New York City.
SHARE: