The States Chess Cup is a new online, team chess league, organized this past fall for players to represent their state and play against others from around the country. Since September, the league had 29 states participating in head-to-head matches to determine the first-ever States Chess Cup champion.

The league schedule was split between a 7-week regular season and a 4-week playoff bracket. In the regular season, each of the 29 states were geographically grouped into four divisions and played through a round robin. The top-two teams from each division then advanced to a single-elimination playoff bracket to determine the winner of the States Cup. 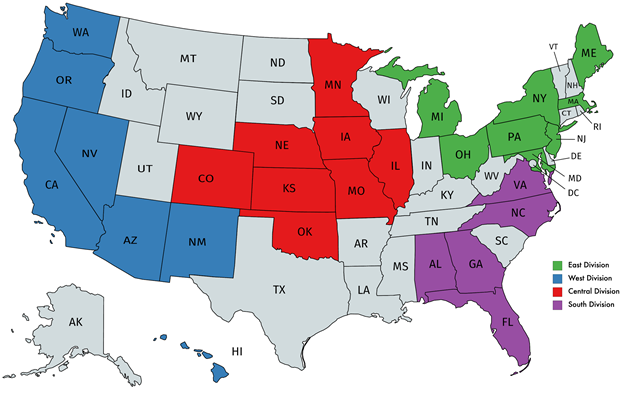 The South Division initially had three additional teams, which later dropped from the league. In response, the South schedule was modified and two wildcard spots were added to the playoffs to keep the league balanced.

The match format was based off the PRO Chess League, with each team presenting a lineup of four players. Each player played one rapid game (G/15+2) against each opposing player, for a total of 4 games per player, and 16 games per match. Crucially, the lineup for each team had a rating cap of 2200 USCF, which allowed more states to field competitive rosters each week. The league was played on lichess.org, with games rated for the US Chess online rapid category. Each match was also streamed live on Twitch, with fans following their favorite states game by game.

Michigan won the East division with an undefeated score of 6/7, with two drawn matches against New Jersey and Maine.

New Jersey finished a close second with 5.5/7, scoring five wins and a draw against Michigan.

New York was very close to qualifying, but missed after being upset by Maryland 9.5-6.5 in the final round despite a rating difference of nearly 400 combined points.

In the South, Virginia won the division cleanly, scoring 5/6 with only one loss to North Carolina.

Georgia took second place in the division with a score of 4/6, with two losses to Virginia and wins against every other state.

The Central Division was very competitive, with four states - Illinois, Iowa, Minnesota, and Missouri – all still holding a chance to qualify for the playoffs in the final week of the regular season. In the end, three teams made the cut, with Missouri being the odd state out. Iowa clinched first place with a strong 11-5 victory over Minnesota, and Illinois clinched second with a 9-7 victory over Missouri. Despite the loss, Minnesota earned a wild-card spot with its regular season score of 5/7.

The West was arguably the strongest division in the league, with many teams sending four-player squads averaging 2190+ nearly every week of the regular season. Five West teams -- Arizona, Oregon, Washington, and two California teams – still held a chance to make playoffs in the final round of the regular season.

In the end, California-North won on tiebreaks with Washington, as the top-two qualifying spots in the division. The additional wildcard spot went to California-South, which edged out Arizona on tiebreaks.

Click through to part two of this article on the States Chess Cup playoffs.