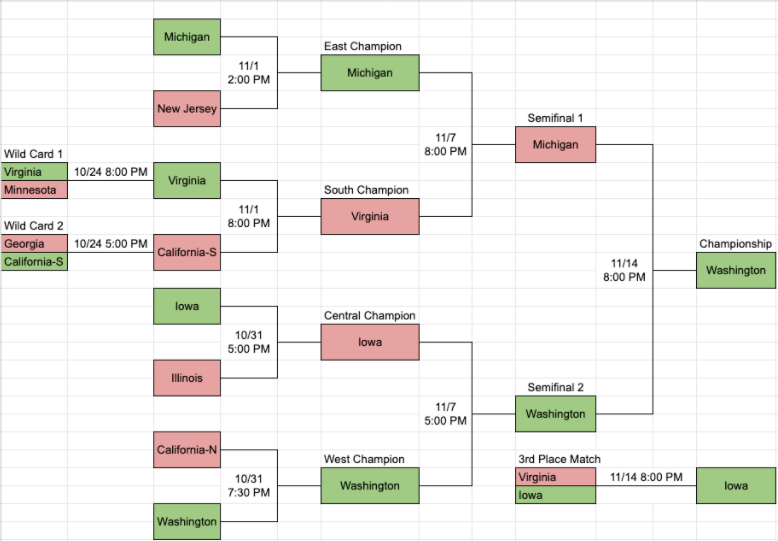 With brackets set from the regular season, playoffs began with the first round featuring two wildcard matches: Virginia vs. Minnesota, and Georgia vs. California-South.

Virginia and Minnesota both brought very similar rosters, with each state having three strong masters and a very underrated fourth board. Virginia, however, won the match convincingly by a score of 11-5, as all four players put in a great day, each scoring above 50% against a Minnesota roster with an average rating of 2195. Virginia NMs Nemanja Milanovic and Isaac Spense, as well as FM Jason Morefield all scored 3/4.

California-South turned in its own decisive victory over Georgia, with a final score of 11.5-4.5. California-South was led by IM Keaton Kiewra, who went 4-0 as the top board. NM Serkan Salik and the very underrated Hursh Mehta both scored 3/4.

The second round featured pairings of Michigan vs. New Jersey, Virginia vs. California-South, Iowa vs. Illinois, and California-North vs Washington.

Michigan built up a healthy lead over New Jersey, heading into the final round with a 7.5-4.5 score. As the higher seed, Michigan held draw odds and only needed a half-point in the fourth round to clinch the match. However, New Jersey proved undeterred by its slim chances, and rallied to win three games of its games. Michigan, however, was saved by this miracle draw from FM Mark Heimann against New Jersey GM Mac Molner.

Virginia and California-South entered with some heavy firepower on the top boards: Virginia had two FMs and a NM, while California-South had IMs on boards 1 and 2. The match was tight after two rounds, but Virginia produced a great third round and scored 3.5 points from those four games, including wins against both IMs. Virginia went on to hold this lead, winning by a final score of 9.5-6.5.

Iowa and Illinois both featured balanced lineups, with the difference between Iowa’s boards 1 and 4 only 123 points. Illinois had lost to Iowa in the regular season but was determined to flip the script in playoffs, and entered the fourth and final round with a 6.5-5.5 advantage. The States Cup saw another come-from-behind finish, however, with Iowa winning 3.5/4 games in the last round to advance. Iowa was led by a 4-0 performance by NM Joseph Wan on the top board, and NMs Tim McEntee and Kushan Tyagi also produced critical victories, scoring 2.5/4 and 2/4 respectively.

Both California-North and Washington featured strong top boards. With two 2400-strength players, California-North jumped to a quick 3-1 score after the first round and maintained that lead through round two. Washington however, featuring three National Masters, turned the match around by scoring 6.5/8 over the last two rounds, advancing from the quarterfinals as the only upset win.

Down to four teams, Michigan took an early 3-1 lead in the first round of its match with Virginia, including a big upset win by 1841-rated Ryan Wang against FM Jason Morefield in mutual time trouble. Virginia fans hoping for another comeback were left disappointed, however, as Michigan held that lead through the last three rounds to win the match 9.5-6.5 and secure its spot in the finals. 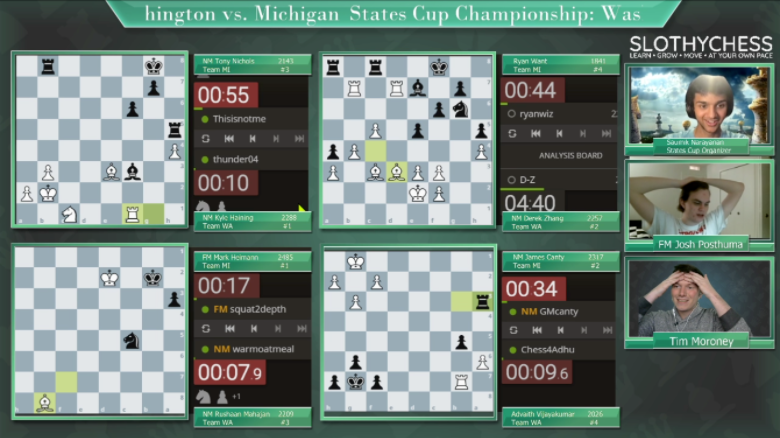 Image Caption
After 10 weeks of play by nearly 30 state teams, Washington and Michigan met in the 2020 States Cup Championship.

After 10 weeks of hard-fought chess through a regular season and playoff bracket, the States Cup was at last down to two final teams: Washington and Michigan. Both teams submitted top-heavy lineups, with Washington sending three NMs and an Expert; and Michigan with an FM, two NMs, and a Class-A player.

After splitting the first round, both Washington NMs Derek Zhang and NM Rushaan Mahajan scored wins in the second round, though Michigan held winning positions on the other two boards and appeared to be heading toward round equalization. But Washington top board NM Kyle Haining pulled out a draw in a wild time scramble with Michigan NM Tony Nichols, and Advaith Vijayakumar did one better – first turning a losing position into a drawn endgame, then walking away with the full point after a mouse slip by his opponent NM James Canty. 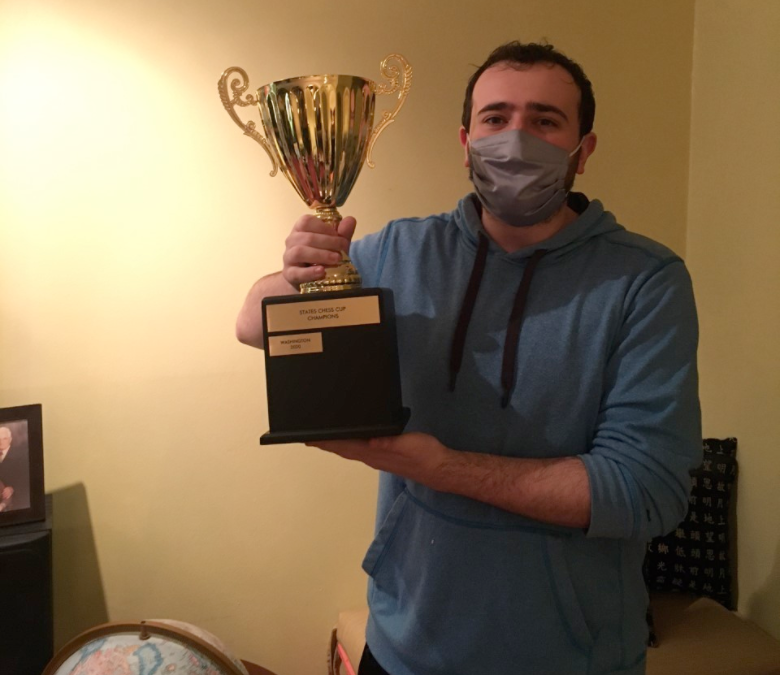 With this 9.5-6.5 win over Michigan, Washington became the first-ever States Chess Cup Champion, getting its name etched on the traveling championship cup. Iowa won third place over Virginia. Medals will also be sent to players from each of those final four teams as a reward for their hard-fought seasons.

Thanks to an incredible initial response to the first States Chess Cup, a second season of the league has been announced. The league is now collecting feedback, so that it may work even better next year.