Today, we enter the middle rounds of the National Middle School (K-8) Championship in Grapevine, Texas. After three rounds, only 13 players from 162 in the Championship section hold a perfect score of 3/3. In rounds 4 and 5 today, those streaks are bound to break as draws and losses creep in amidst more challenging pairings.

In round 3, Brewington Hardaway continued his dominance with a clean win against Pulak Agarwalla as Black, playing a Sicilian Kan and immobilizing his opponent until the result was clear.

FM Jonathen Chen continues his perfect score after round 3 with a victory against Aradh Kaur as White, patiently trading down and rolling his center pawns to promotion

Timothy Lim kept his streak alive at 3/3 with a win with a London against Raju Yakshwag, catching his opponent offside and finding a mate on the kingside after trying to breakthrough amidst a shuffling of pieces.

Surprises In the Standings

As the return to over-the-board play grows following the drought during COVID, players’ ratings are still catching up with improvements made during lockdowns, as evidenced by several upsets in the early rounds in the Championship section: Aston Roberts (1831) took a point off Neeraj Harish (2157); Vedant Margale (1666) snagged a win against Jed Sloan (2104); Felix Guo (1685) picked a point from Marvin Gao (2181); and Aayush Wadhwa (1806) earned a victory against the 2022 K-8 Blitz Co-Champ Vaseegaran Nandhakumar (2048).

One player showing fortitude beyond his on-paper rating is 1735-rated Aiden Teitelman, a 7th grader from New York who is the only under-1900 holding a 3/3. In round 2, he beat Kalia Wang (1889) and in round 3, dispatched the higher-rated Texan Lucius Melillo (1978). For the fourth round, Aiden is paired as Black against 2171-rated Aryan Gutla on Board 7.

This year’s guest Grandmaster Julio Sadorra has been making his rounds at the National K-8, hosting a 30-board simul on Friday, taking all-comers Blitz challenges in the afternoons and giving a lecture on attacking technique around lunchtime today.

Don’t forget tune into the US Chess Twitch channel for all the K-8’s top boards. First broadcasts begin at 8 p.m. ET, 7 p.m. CT on Saturday with special guest commentators WGM Sabina Foisor and WIM Emily Nguyen, who will provide insights and connect all the critical moves for the top boards. Give us a follow, subscribe, and watch live at www.twitch.tv/USChess. 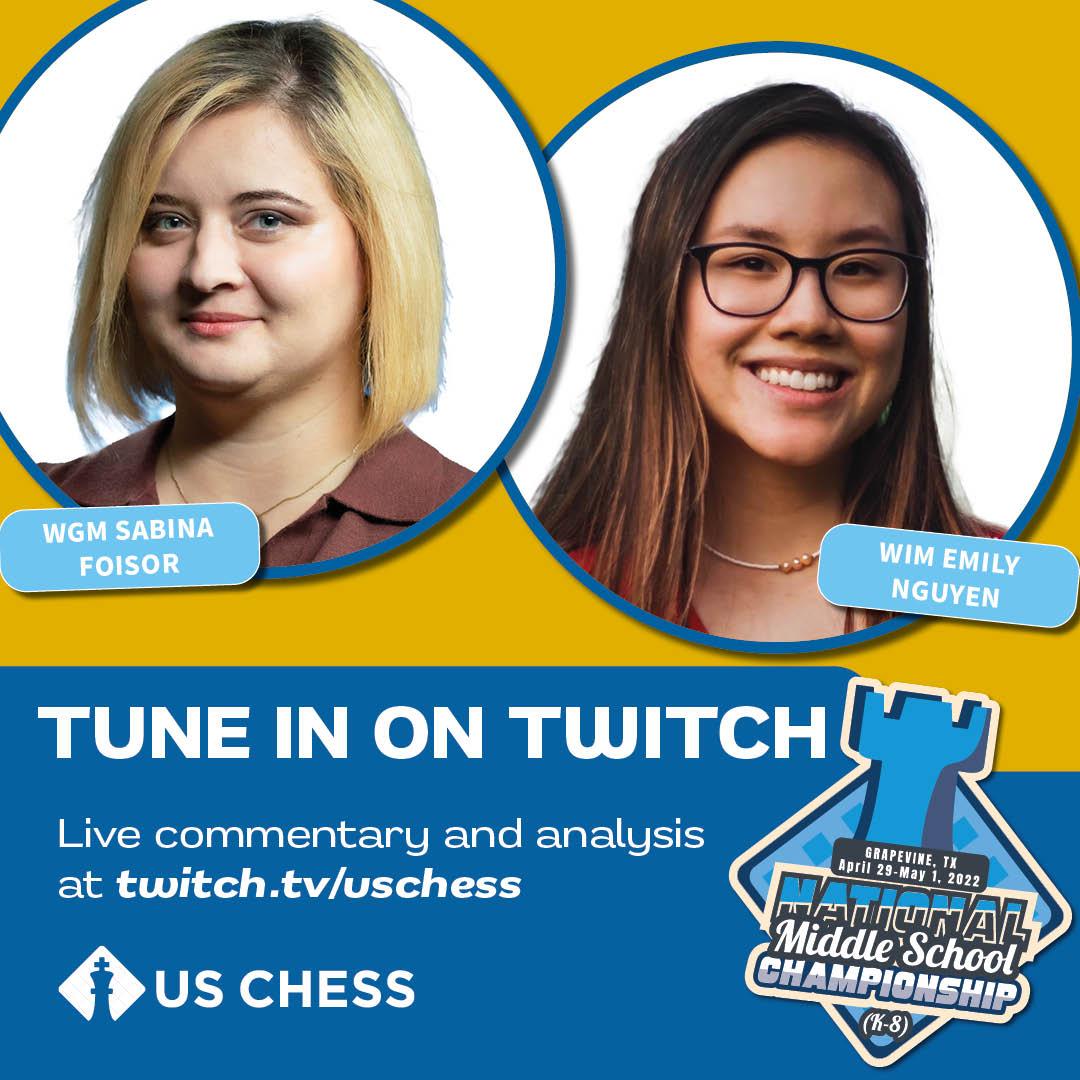