A Spectator’s View of the US Champs: The Saint Louis Experience

From the moment we landed in Saint Louis we were greeted with signs of chess culture in the chess capital.  A banner welcoming guests for the Chess Championship was hung on the escalator down to our shuttle ride.  We headed over to the club to check out the World Chess Hall of Fame before the round started.  We were greeted by the world’s largest chess piece and an extremely helpful staff. 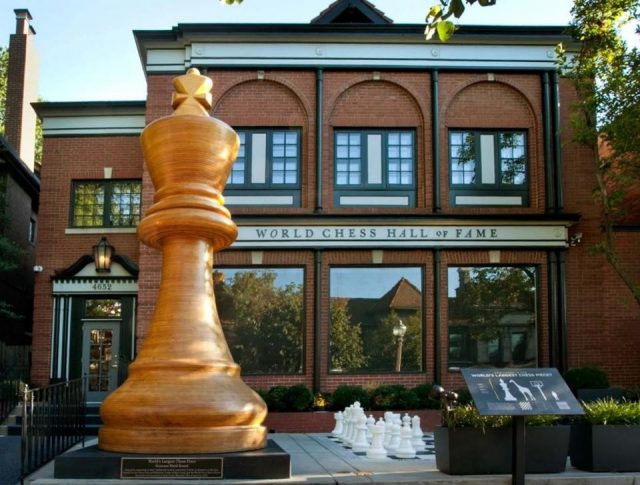 (Credit: World Chess Hall of Fame)
They told us about the local artists who contributed to “The Imagery of Chess” and a super interactive chess and comics exhibit titled “POW."  Both were definitely worth the time. 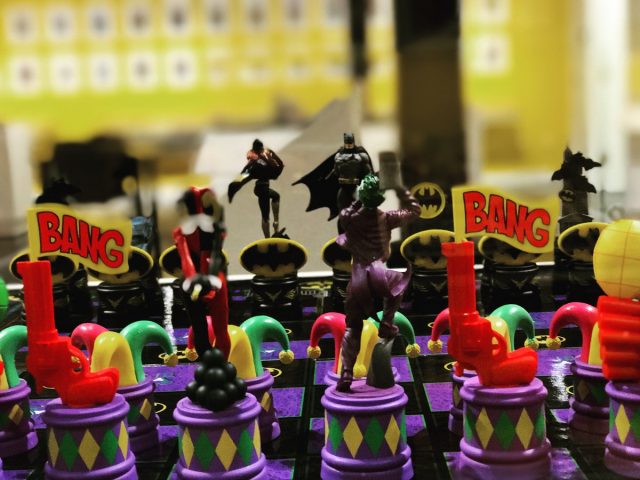 Photo Daniel Meirom
Having recently visited NY for the World Championship we had much anticipation as we walked into the Saint Louis Chess & Scholastic Center.  More wonderful staff greeted us and helped us know the day’s events.  We checked our cell phones and headed up to the beautiful playing area greet the players.  Instantly we were affected by the level of stress in the room.  It had just rained and it was unclear whether incoming players were dripping with anticipation or simply rainwater.  Special lighting and DGT boards were in place for the best possible conditions for the players. 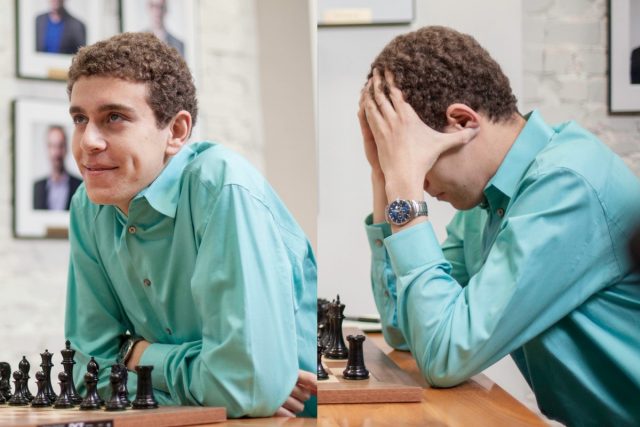 Daniel Naroditsky, Photos Eric Rosen
World number 2 GM Wesley So was munching on some pre game snacks, and we were met with friendly hugs and hand-shakes from several players we personally know.  Despite being the elite event of American chess the level of accessibility was incredible for all of the fans in the room. After the first few moves we headed over to the Kingside Diner next door.  We were excited to hear about the generous 50% discount that allowed us mounds of delicious food at a fraction of normal restaurant prices.  The Johnny Cash was one of the favorites! TVs, showing the games adorned the walls, and chess fans were chattering around the room. 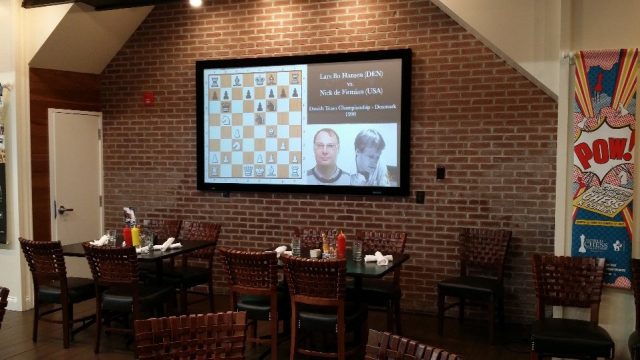 In a room adjacent to the Kingside’s dining room was a wonderful commentary room.  Young and talented Canadian Champion GM Eric Hansen and ever entertaining GM Ben Finegold followed the games and maintained a connection with the crowd of excited fans. 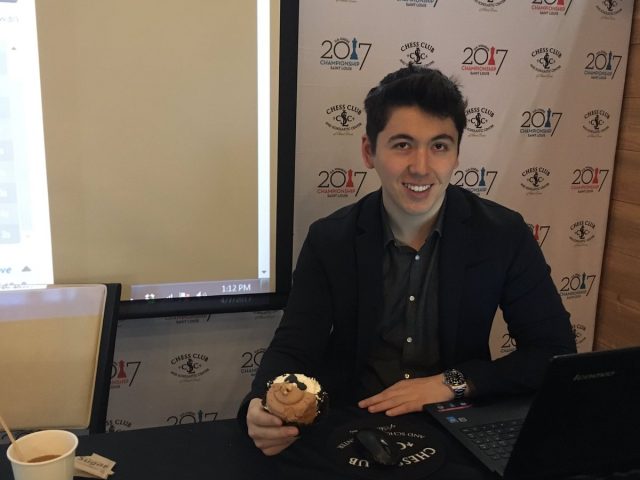 Eric Hansen, Photo IM Greg Shahade
New this year was the live commentary team of GM Alejandro Ramirez and WFM Lili Fuentes who offered a multicultural Spanish option for fans.  GM Naroditsky even got to show off his Spanish skills when being interviewed after a round 3 draw. 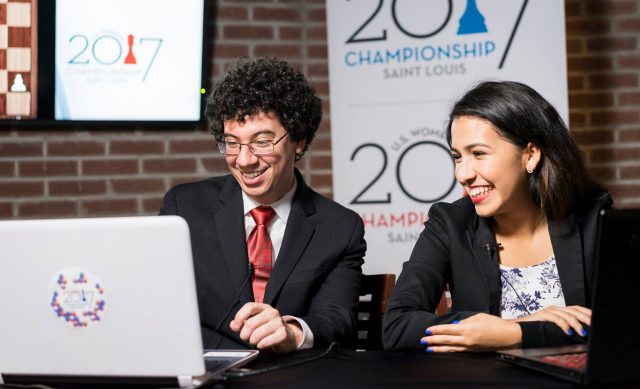 Alejandro Ramirez and Lilli Fuentes
Back at the club we spotted commentator GM Yasser Seirawan in his typical jovial mood speaking in detail to guests and showing them around the center.  Players signed autographs as their games finished and often discussed their games with the spectators in the surrounding areas. 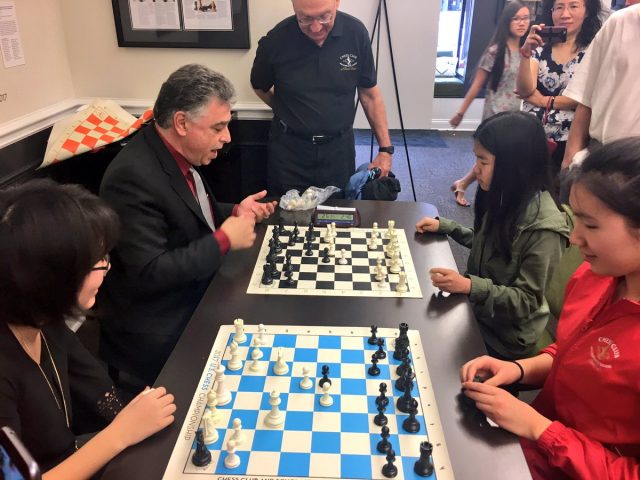 Bughouse with Yasser Seirawan and US Women's participants Jennifer Yu, Maggie Feng and Carissa Yip. Club Founder Rex Sinquefield looks on.
In the basement of the chess club was a fully equipped TV Studio.  The show with GMs Yasser Seirawan, GM Maurice Ashley, Cristian Chirila and US Chess editor Jennifer Shahade were not accessible to the public. 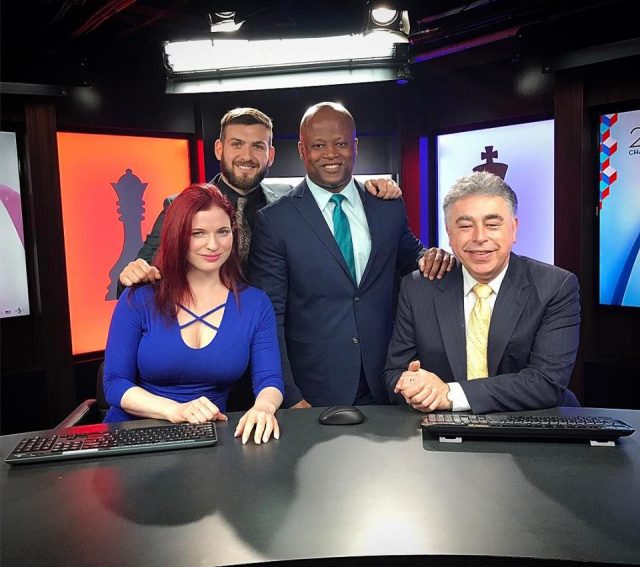 Jennifer Shahade, Cristian Chirila, Maurice Ashley and Yasser Seirawan, Photo Cristian Chirila
However you could watch them live on TVs in a sitting area that offered free refreshments for spectators!  Most American tournaments don’t even offer such things for players. 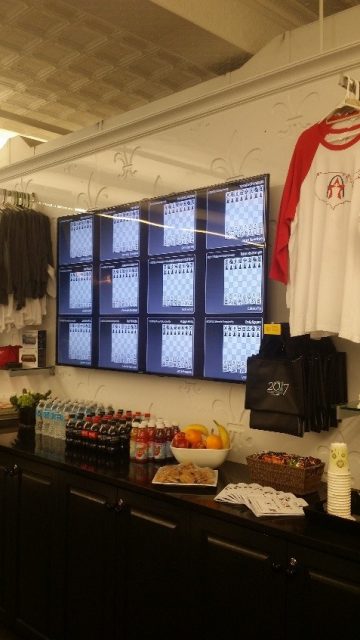 The Sinquefields and the Chess Club spared no expense in creating a professional broadcast of all their events.  One concern for some fans including Class-A player Arthur Glassman from New Mexico was the navigation of the Chess Center’s many websites.  However, the site USChessChamps.com offers all the information necessary. There was a true sense of chess culture in the area.  The Sinquefields and the staff at the chess club and the Hall of Fame have put time and financial resources into College Chess, Scholastics, Local Youth Programs like boy scouts, and Top Level events for the best players in the world.  It really says something about the atmosphere that three of the highest ranked players in the world (Nakamura, Caruana, and So) all just walk in the front door. Before the intervention of Rex and the amazing Chess Club and Scholastic Center, there was much uncertainty on holding the US Championship each year. There is now some stability for top players in the US due to the impact of the Saint Louis Chess Club. We hope this will continue for many years to come and encourage readers to make the trip to the chess capital for a future event, whether it’s next year’s US Championship, or the upcoming Sinquefield Cup.
SHARE: