Grandmaster Wesley So has been crushing in all forms and nearly all comers through the month of June. After a pandemic-induced digital offseason, the reigning US Chess Champion has made a most-successful return to the physical board in the Grand Chess Tour, the international $1M five-tournament summer series that he now leads after two events.

Technically a showcase of dominance across three different time controls, So began the month with a retest of his skills under the classical clock, notching a second-place finish in the GCT’s opening Superbet Chess Classic in Romania. Immediately following, he kicked things up a notch by winning outright in the Paris Rapid & Blitz, the first of three GCT speed events, which finished on June 23. Across a total of 36 games played over the board in the month – 9 classical, 9 rapid and 18 blitz – So has lost just one single blitz game in his return.

So led in Paris through the event’s five-day entirety, beginning with nine rounds using the rapid clock – which he declared over the pandemic break as his newfound favorite time control, responsible for delivering him not only the 2020 US Chess Champion title, but also several big wins over World Champion Magnus Carlsen in the online finals of his monthly Champions Chess Tour.

With each rapid game weighted double in the GCT Paris scoring format, the steady So notched three victories at two points apiece, including two wins on the third and final day of the time control to separate him from the pack. The day began with a statement game, winning with the black pieces in a sharp Berlin against World No. 2 compatriot GM Fabiano Caruana.

Caruana,was on the opposite trajectory of teammate So through the month of June. After a forgettable seventh-place finish in his reliable classical time control in Romania, Caruana was even less-effective with the clocks sped up in Paris. He scored 4/9 through the rapid game section and 8.5/18 in the blitz, finishing eighth place in the second event and now likely out of the running for any significant GCT overall prize.

So, however, looked business as usual under the blitz clock, scoring 12.5/18 in the format and finishing the final day 1.5 points ahead of the pack to cushion his lead. His only loss of the month came to GM Levon Aronian in a surprisingly straightforward game, though the blip was left immediately behind as So put an end to surging GM Alireeza Firouzja in the following round. The Iranian-born speed-specialist, who turned 18 during the Paris event, was winless through the rapid section but came with something extra during the blitz portion, tallying six wins on the first day alone – until So stopped him flat in a Trompowsky Attack. 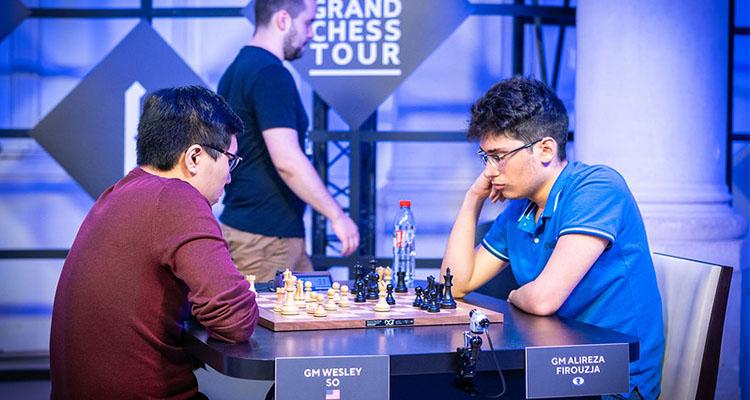 So led a two-horse race with Russian GM Ian Nepomniachtchi entering the final blitz day in Paris, both enjoying a four-point cushion in the standings as top finishers in the weighted rapid format. The event appeared to be headed for a final-round, dream-scenario pairing between So and Nepo with the tournament title up for stakes, though the Russian didn’t hold up his half of the bargain, losing to Firouzja in the penultimate round and falling out of pace. Despite the lack of mathematical chances, the World Champion Candidate went hard at So with a Nimzo-Larsen Attack in the final round -- though the attempt produced no fruit. 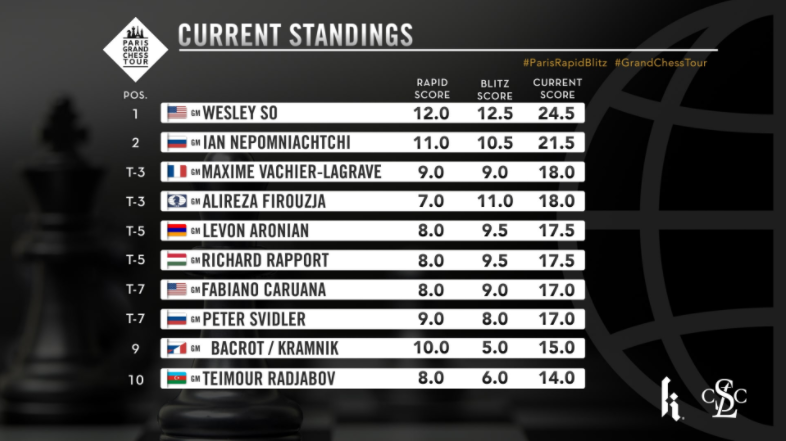 After two events, So now leads the Grand Chess Tour with 21.3 points and $82,500 in prize money. As a full-tour participant, he will play in one of the remaining two speed events, scheduled next in Zagreb, Croatia on July 5 and again in St. Louis, MO on August 9; as well as the classical Sinquefield Cup in St. Louis on August 16.