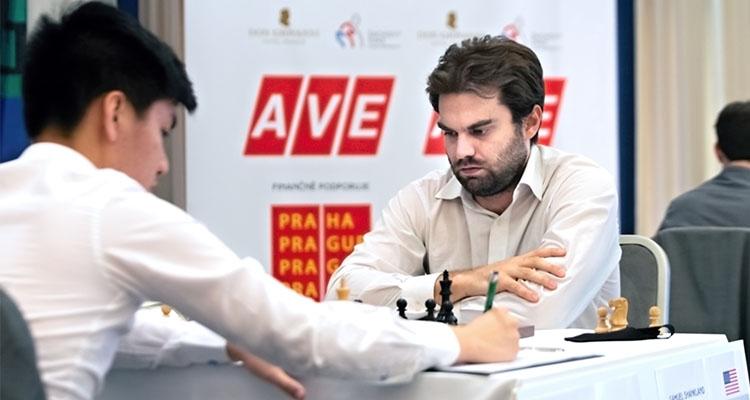 American GM Sam Shankland, the former 2018 US Chess Champion and two-time FIDE Olympiad gold medalist, took his 2020 pandemic-forced offseason in stride, building himself back stronger physically and mentally than ever before. After more than a year away from physical pieces, Shankland made a stunning return to the board at the 2021 Prague International Chess Festival in June, where he won the masters section clear with an undefeated performance rating of 2900. The effort blasted his rating back above the super-elite 2700 rating barrier, sitting now just outside the top-30 players in the world. Chess Life Online caught up with the American star on his way to Sochi, Russia for the 2021 FIDE World Cup to chat about his 2D-life during the pandemic, his stellar return to classical chess, and how to set goals when you’re already one of the best in the world...

Chess Life Online: Congrats on your big win at the 2021 Prague Masters, Sam! As far as any restart might go, that might literally be the return performance we all dream about ...

“After a year and half of not playing, I played pretty well, I think. I don’t think I played well enough to be a 2900, but I think some of that just came from the other guys playing worse than I would expect from them. Maybe because they weren’t doing the same things as me and got rusty.” 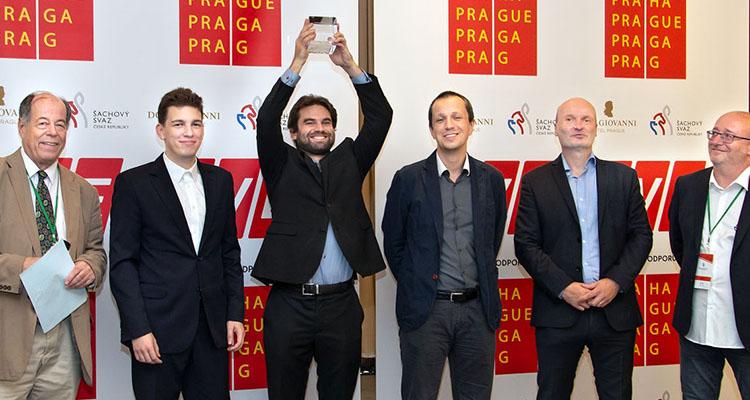 Image Caption
After a 15-month break from the board, GM Sam Shankland won the 2021 Prague Masters with a 5.5/7 score and a 2900 performance rating. // photo credit 2021 Prague Chess Festival
Image

CLO: We all understand life during pandemic shutdown, and now seeing this strong performance upon return, the question begs of how you kept busy during the offseason. Is it safe to assume being stuck at home was OK for you?

“Being stuck at home really did not feel like a big issue, I took on some projects. I created an entire repertoire on Chessable which I’m very proud of and have been very happy with. I was able to actually live in my house, a place that I basically never lived in before because I had been travelling so much. I’ve always taken my physical health very seriously, both in terms of diet and exercise, though that’s not easy to maintain when you’re traveling. But I got back into it, like peak physical condition, the same kind of fit I was when I was 20 or 21. I’ve been very happy with that and kept trying to do the same kind of chess work as before, and I think it paid off.”

CLO: After everything shifted online, we’ve only seen you play in the 2020 US Chess Championship, held online by the Saint Louis Chess Club, and the Opera Euro Rapid on Magnus Carlsen’s Champions Chess Tour. Was that enough to suffice your competitive itch?

"I would have loved to play in more Magnus Tour events or some of the St. Louis stuff. But obviously I know there’s a lot of very good players out there and only so many spots. And it’s hard to get invited, of course. But I think that both Chess24 and the Saint Louis Chess Club did a fantastic job in hosting such events, when that’s really all we could do. When there was a void, and that’s all we had, they really stepped up and did their part.

"But while I would have liked more, I’m not as bummed out about it as you might expect. I’d be much more bummed if I didn’t get invitations for classical chess returning.” 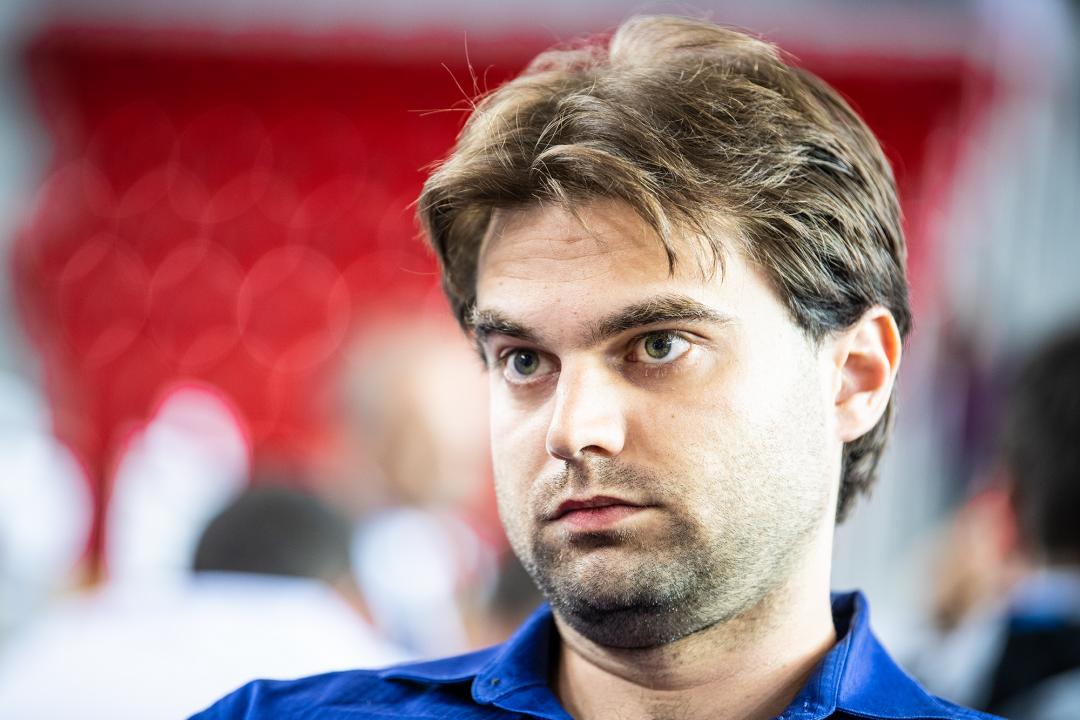 CLO: So despite this shift online during the pandemic, which has also brought a shift to rapid and faster time controls, you sound glad to see a return to classical chess ...

“Well, I’m very happy about it, of course. I’m much better at classical chess than I am at rapid and blitz. I have always thought classical chess was great because I think there is a very healthy balance between how far talent will get you compared to hard work, and I think you really need both to make it. The faster you get in time control, that dial swings heavily towards talent, and very far away from hard work.

"The kind of calculation training I’m doing, I’m looking at hard positions, calculating 15-20 minutes and finding the right move -- I get better and better at that over time. And that has turned me into a really powerful classical player. But that skill is approximately useless in rapid and blitz.

"I work really hard to have a very deep opening repertoire, and in games where the first mistake might be decisive, this is a huge deal. But in games where every other move is a mistake, and whoever makes the last mistake is more important, it's really not that helpful to start with a slight advantage in the opening.”

CLO: And how was the actual return to the physical board? You spent 15 months without touching pieces in a competitive setting, did the back-and-forth between 3D and 2D pieces mess with your game?

“Maybe it’s just because I’m an old ancient being at 29 years old, but when I train, I use a physical board. When I solve problems, I set it up on an actual board. I don’t calculate well on a 2D board. If I were to rank my three different levels of calculation, number one would be on a 3D board, number two would be blindfolded, and number three would be a 2D board. I would find myself closing my eyes in these online events.

“And I know there are kids out there who play online all the time. When I played in the 2020 US Championship – the online version – I knew there were guys like Ray [Robson] and Jeffrey [Xiong] and Wesley [So], guys who I generally consider my peers. I knew they would be stronger than me, but I didn’t really appreciate just how much. They were so much better at the 2D stuff than I was.

"So I sort of had to make a choice at some point: how much do I want to prioritize being able to do that better? To start playing a lot of online blitz, so that I would be able to compete with these guys. And I think I made the right call to not care that much. I’m just very happy that we’re sort of playing back in my territory, and I don’t have to play on enemy grounds, so to speak.” 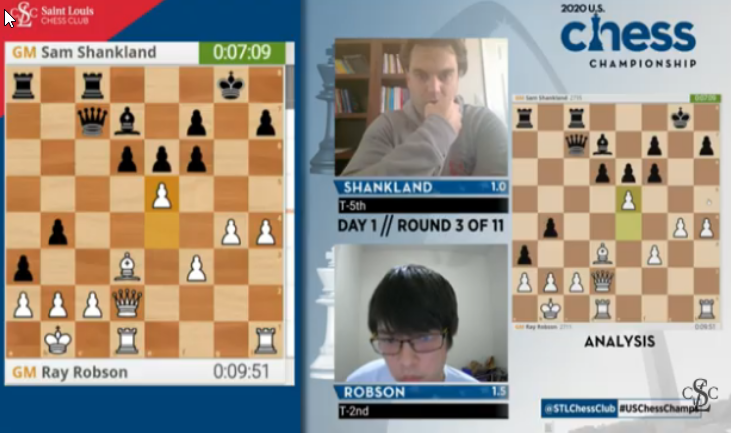 CLO: Certainly one of the most noteworthy headlines that came out of Prague was your return to the 2700 club. Your performance earned 18 points and brought your rating to 2709, now ranked 31st in the world. Does it feel good to be back in that club after falling out?

“I had been well over 2700, and then I fell a lot when I failed to overcome some adversity in my life in 2019. In general, I don’t like making excuses for my failures ... but I made some wrong decisions, and I didn’t take care of my physical or mental health in that regard. And you cannot play elite-level chess when your life is in shambles. It just doesn’t work, you will fail.

“But toward the end of 2019, I was able to play with less stress and less drama in a lot of ways, and I started playing really well again. And right when things were turning around, I had put together a couple 2750 performances in a row, my rating was going back up and seemed set to go back over 2700 in the next tournament – then the world shuts down, and I’m stuck with this disgustingly low rating. I couldn’t even look at my FIDE card.”

CLO: Ha! You did have a unique perspective – and perhaps not a very comfortable one – of being not just stuck at home, but also stuck just below 2700. Is that rating threshold something tangible? Do you feel 2700 as a barrier, mentally or otherwise?

"Getting stuck at 2690 was extremely painful. To be stuck for a year and a half at a rating you can’t look at without vomiting is really tough. Very painful to be playing clearly well-above 2700 strength, but stuck with a rating below it, and unable to move it, because I couldn’t play. That was tough. 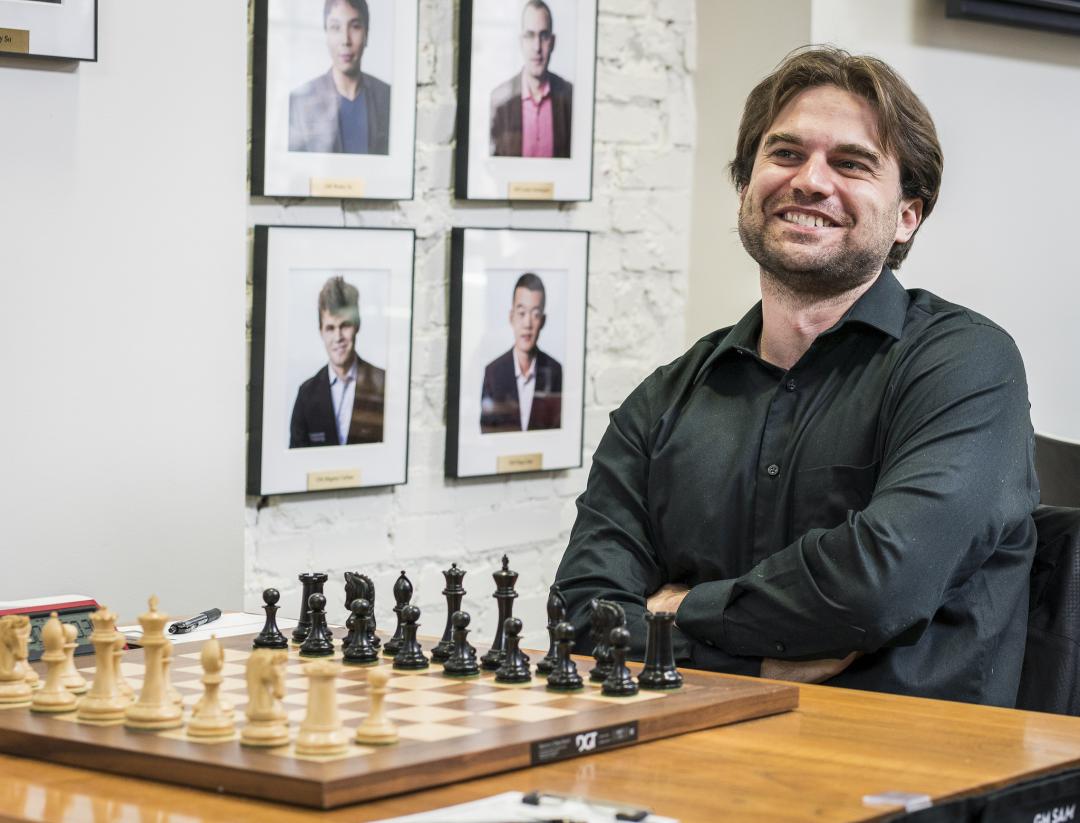 CLO: Now you get to follow up that strong performance in Prague with the 2021 FIDE World Cup, which begins July 10 in Sochi, Russia. How exciting is a World Championship-cycle event?

“I’m really looking forward to it, the World Cup has always been one of my favorite tournaments, and I’ve played well generally in the past. I’m healthy, strong and feeling well prepared; I’ll have a bye in round one, which is nice too. And I’m feeling optimistic. It’s a tournament that really rewards deep preparation and doing a lot of work in advance and being disciplined, which I think are some of my strong points.”

CLO: You’ve delivered a list of strong tournament victories: a US Chess Champion who has hoisted Olympic gold medals on two separate occasions. What do you have special about playing big on the biggest stages?

“I handle pressure well. I think one of my best qualities as a player is that I win when it’s important. And I don’t even think I’m any better at doing that -- rather that other people are just worse at handling that pressure.

"I think one of the reasons my number of strong tournament victories is higher is that I cannot remember a time I needed a result in the last round of a tournament and failed to get it. Every single time I’ve gotten the win. And that’s being able to perform well under pressure, it’s really just about psychology and attitude. 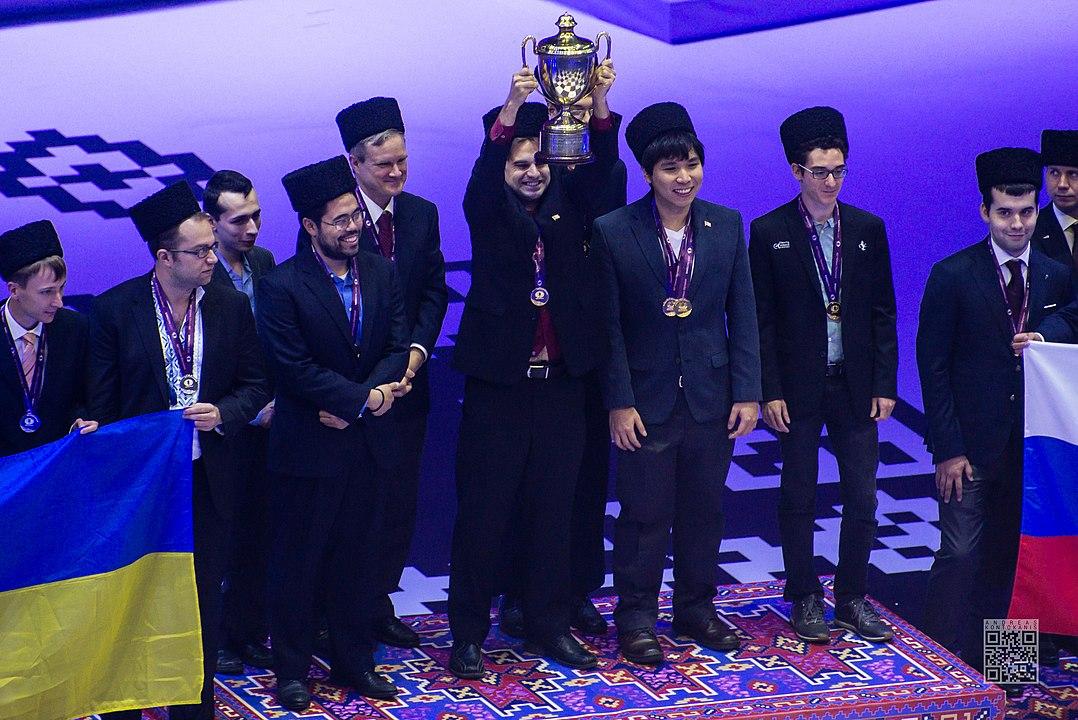 Image Caption
GM Sam Shankland raises the Golden cup for the US team at the 42nd Chess Olympiad in Baku, Azerbaijan in 2016. // photo Andreas Kontokanis from Piraeus, Greece

CLO: Do you still set goals for yourself at this high of a level?

“I’ve always believed in lofty goals: my goal is to be the World Champion. Now – I think this is very unlikely to happen, and my odds for this are significantly lower than one percent. But I can guarantee you it will not happen if I don’t try my best, if I don’t throw myself at it with full force. Ultimately, I think that you should be setting lofty goals for yourself ... what's that expression? ‘Shoot for the moon. Even if you miss, you'll land among the stars.’ If my goal was to make the top ten in the world, I would peak at number ten. But if my goal is to be world champion, and I peak at number five? Even though I technically fail the second goal, I think I will be much happier with myself and my career.”

CLO: Life aside, chess itself has gone through much evolution during these strange times ... What do you think about this new state of chess as we begin to emerge?

“I’m really glad the tournaments are coming back, I think it’s great. And really at all levels as well, we’re seeing a lot of opens come back, too. I’m glad to see that chess players at all levels of strength and seriousness are having tournaments made available to them that are not online, and that real chess is coming back. I also love that there’s so much enthusiasm for real chess, face-to-face chess.

"I’m really looking forward to all the upcoming events, so I can keep up my strong form from Prague.” 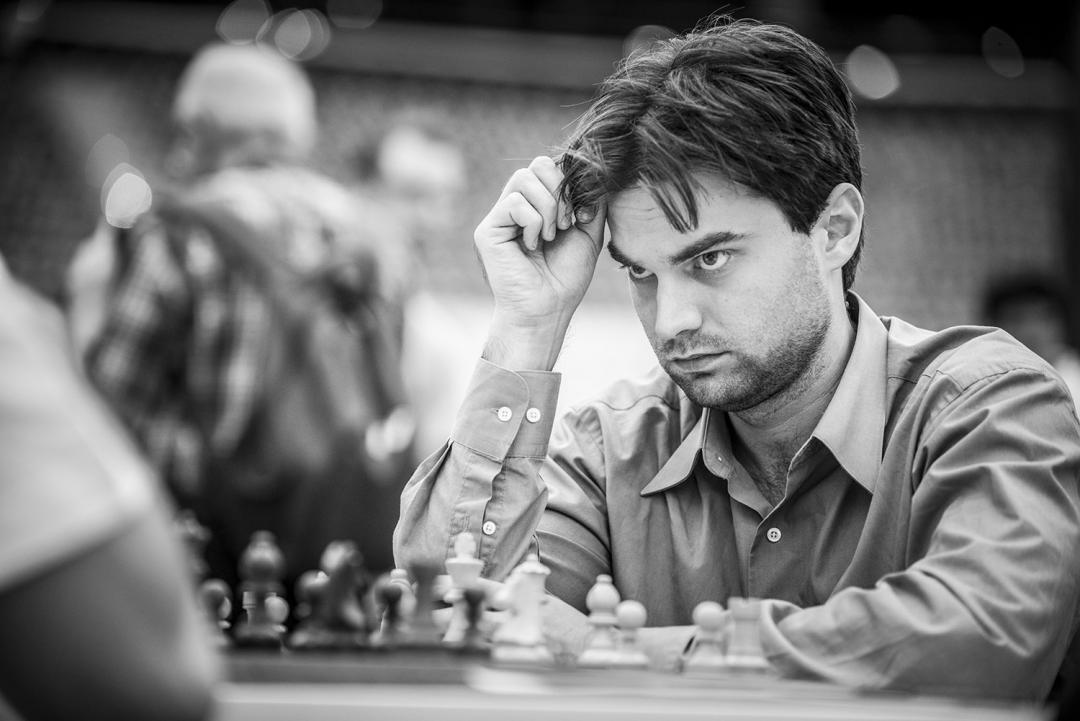 Fanstatic Player, GM and person! My best wishes for your carreer! Greetings by Caracas!