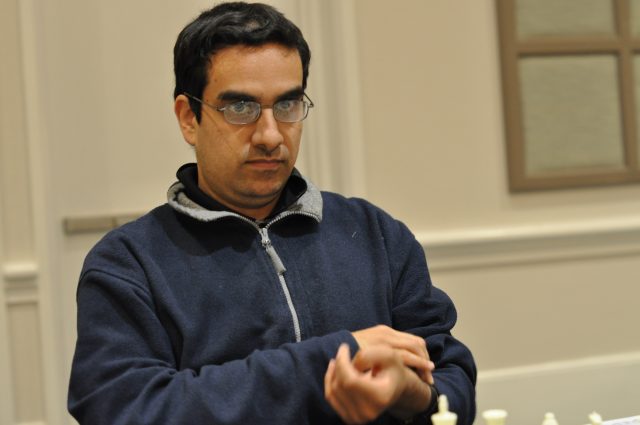 Justin Sarkar (photo John Hartmann)
The Hartford Open is one of the smaller events on the CCA calendar. This year’s tournament drew 115 players pursuing a guaranteed prize fund of $7,000. With 9 of 24 players in the Major section having FIDE titles, and a total of 10 being over 2200, competition was fierce! Sarkar got some real breaks in the pairings through the first three rounds, as his first three opponents had an average rating of only 1941! He took advantage of this by going 3-0. Sarkar then played GM Alex Ivanov and WGM Carissa Yip on Sunday and scored 1.5/2 in those games to win the tournament. In round one, there were no upsets and no draws. The second round was much different, especially in the 3 day schedule. Newly-minted WGM Carissa Yip defeated top seeded GM David Berczes on board one. She annotates that game for CLO readers: 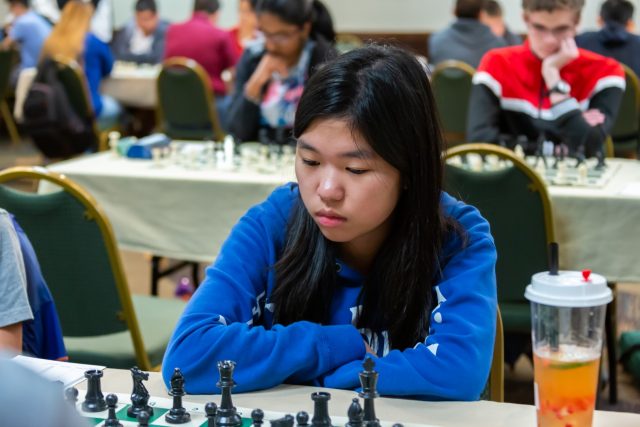 Carissa Yip (photo Hanks)
Meanwhile on board two FM Gabriel Petesch held IM Yaacov Norowitz to a draw. Sarkar got a very favorable pairing as he played the lowest rated player (Ryan Sun, who had the bye in the first round) in the tournament! At the merge, there were four perfect scores: GM Alex Ivanov, IM Justin Sarkar, WGM Carissa Yip and Class A player Daniel Zhou, who got very favorable pairings in the two day schedule to be paired down twice and get to 2-0. Ivanov defeated Yip on board one and Sarkar defeated Zhou on board two, so going into Sunday thee would be only two perfect scores: Ivanov and Sarkar. In round four, Sarkar and Ivanov drew on board one. FM Petesch could have caught the leaders, but he drew with FM Max Lu to remain half a point back. Two other players would also win to remain within striking distance of the leaders: Berczes defeated NM Zachary Tanenbaum on board three and WGM Yip defeated Zhou on board four. Because of the small number of players, many of the leaders had already played each other and the last round pairings were interesting. Ivanov and Sarkar could not play again, so they faced the highest players at 3-1. Ivanov played Berczes on board one while Sarkar faced Yip on board two. Sarkar won against Yip and annotates the game for CLO. GM Ivanov also could have scored 4.5, but he was only able to draw with GM Berczes.  He finished at 4-1 in clear second place and won $600. Tannenbaum defeated Petesch, while IM Norowitz defeated FM Lu. This meant that GM Berczes and IM Norowitz shared third place, winning $200 each. The section winners were: U2010 Peter Wolfe, 4.5 – 0.5 $700 U1610 Scott Sheff and Justin Trey, 4.5 – 0.5, $460 U1210 Michael Boisselle, 5-0, $300 Mixed Doubles Sandy-Rose Bilodeau-Savaria & Car;-William Bilodeau -Savaria. 6 points, $100 to each player Blitz IM Yaacov Norowitz, 8-0, $55 NTD Steve Immitt directed for Continental Chess assisted by Bob Messenger. Full tournament details can be found at www.hartfordopen.com. Previous Continental Chess tournaments can be found at the Continental Chess website at http://www.chesstour.com/cross.html.
SHARE: