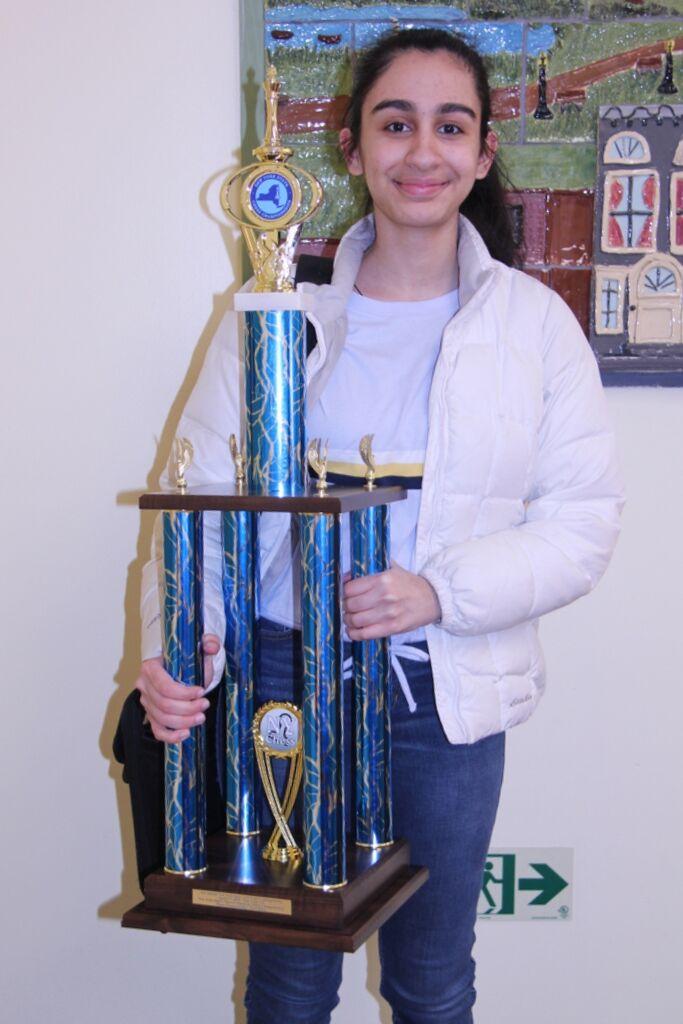 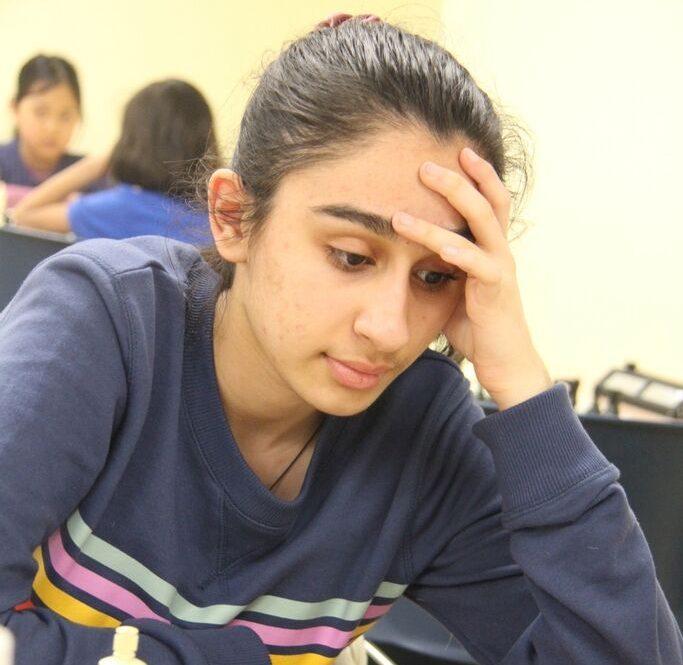 The 3rd Annual New York State Girls Chess Championship was held on April 6-7, hosted by Columbia Grammar and Preparatory School in New York City. The event was elegantly timed one week before the All Girls National Championships, and indeed many of the participants in the NYS Championship headed a few days later to Chicago. 9th grader Martha Samadashvili impressively repeated as NYS Girls Champion, thus earning the right to represent New York State at the National Girls Tournament of Champions, this summer at the 2019 US Open in Orlando. As girls’ chess has continued to flourish across the USA, New York State has played an integral part. Last year, 240 players competed in the NYS Girls Championship; this year, that number increased to 295 players (making this event the largest girls event in the nation, except for the all-girls nationals). This year’s event utilized many of the common areas of CGPS, including its gyms, libraries, cafeterias and lobbies. Organizing and directing the event required the combined efforts of CGPS Chess Director IA Sophia Rohde, Chess Center of New York, Little House of Chess and the CGPS chess team. CGPS has been welcoming chess and chess players for decades with its multiple class offerings, dedicated chess lab, monthly tournaments, and special events. 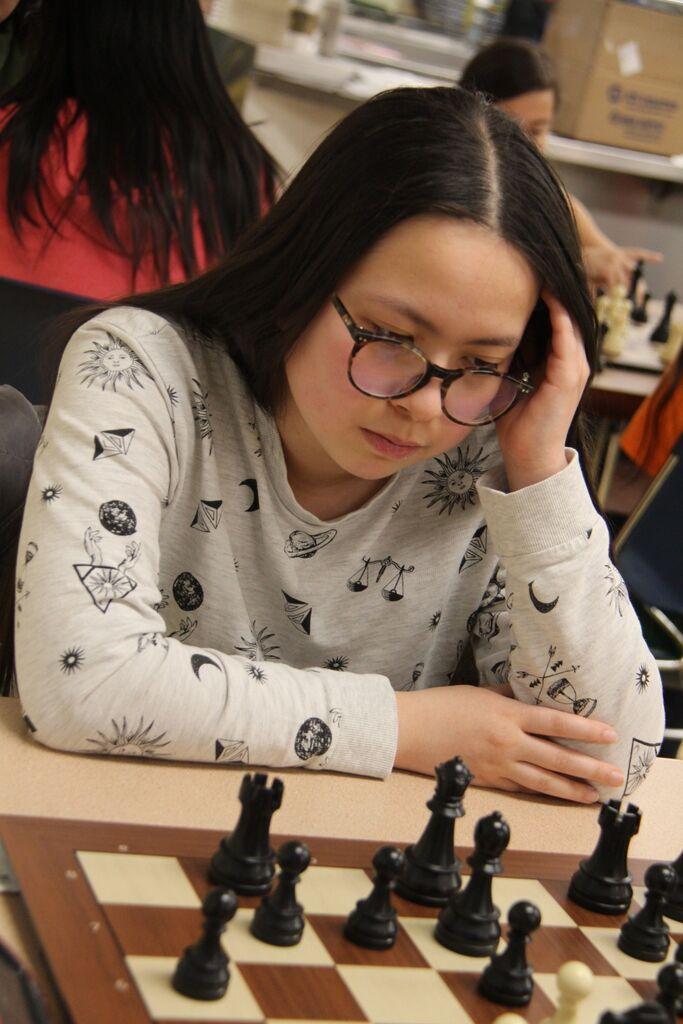 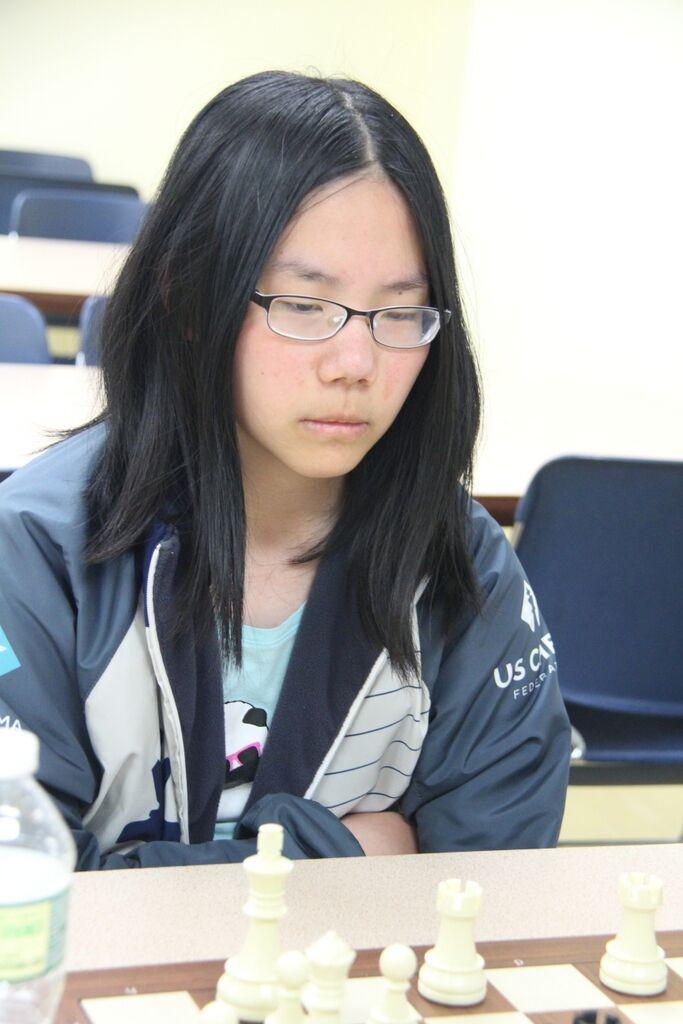 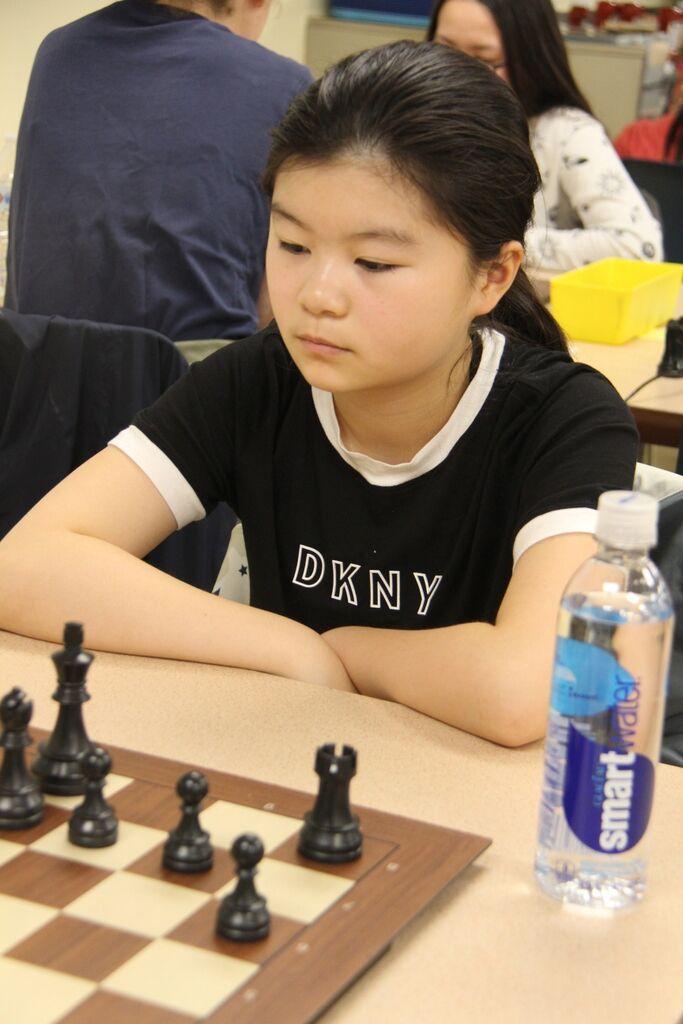 After 5 rounds in the Championship, WFM Samadashvili had a perfect 5-0 score, and an insurmountable lead of 1.5 points with one round left to play. However, kudos to Evelyn Zhu, who defeated Martha in round 6. Zhu finished with 4.5, in a tie for second with Sophie Morris-Suzuki and Ellen Wang. Round 1 of the Championship was an indication of how fierce the competition was, as Sakura Laporte was able to obtain enough counterplay against Evelyn Zhu in an Albin Counter Gambit

By Round 3 of the championship, defending champion Samadashvili had settled into a groove of steadily winning in the endgame. A case in point was her effort against Ellen Wang. Round 3 also featured a dramatic game between Samantha Dong and Aayushma Rai. Andre Harding, one of the TDs at the event, annotates it for us: In round 5, Samadashvili clinched the title with this effort against Nancy Wang. Also in round 5, the tough battle for second place gave rise to this sustained tactical contest between Ellen Wang and Sophie Morris-Suzuki In the K-6 Championship, Simone Morden won with 5/6, while her sister Rose Morden scored 4.5, tieing for second with Abigail Yang. The Morden sisters have played in all 3 NYS Girls Championship tournaments; last year, Simone had finished 2nd in the K-6 Championship as well. 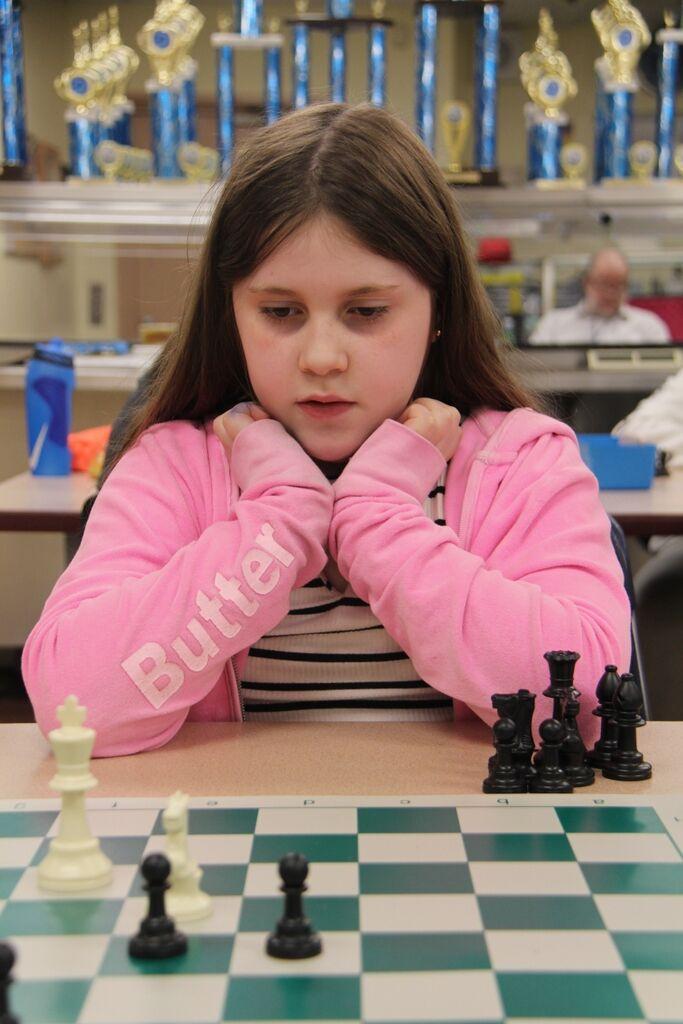 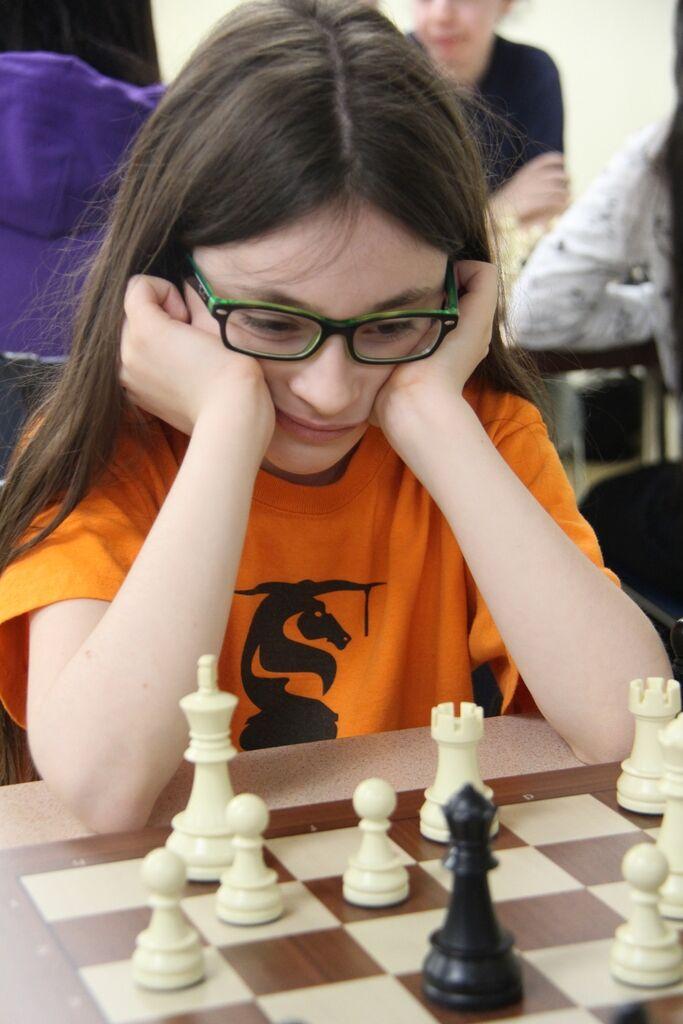 Simone Morden detailed her experience at the NYS Girls Championship as follows: When I won first place in the K6 New York State Girls Championship 2019, I felt ecstatic. It also felt special as my younger sister, Rose, took the second place trophy besides me. I went into the tournament with the mindset that I am going to win. President Theodore Roosevelt said, "If you believe you can, you're halfway there." The other half comes from hard work and dedication. The trophy felt well-deserved. I think that girls chess tournaments are a great way of encouraging girls.  15% of all rated chess players are girls. Tournaments like the New York State Girls Championship 2019 at Columbia Grammar hope to change that. Simone Morden 5th Grade at PS 33 Rose Morden also shared her experience:

Winning second place in the New York State Girls Championship in 2019 was a thrill for me. It was exciting to compete with 300 girls from all around the state. What was even more special was that my older sister Simone received first place. Playing against really good girl chess players, made me feel happy to know chess wasn't a male dominant sport. Chess has changed my life in so many ways. Receiving second place was unbelievable! Girls’ chess tournaments promote girls to play chess. In chess you travel, compete, and have fun. Competing against other girls makes me feel that I'm not the only girl playing chess. If you're a girl, I strongly encourage you to play chess. 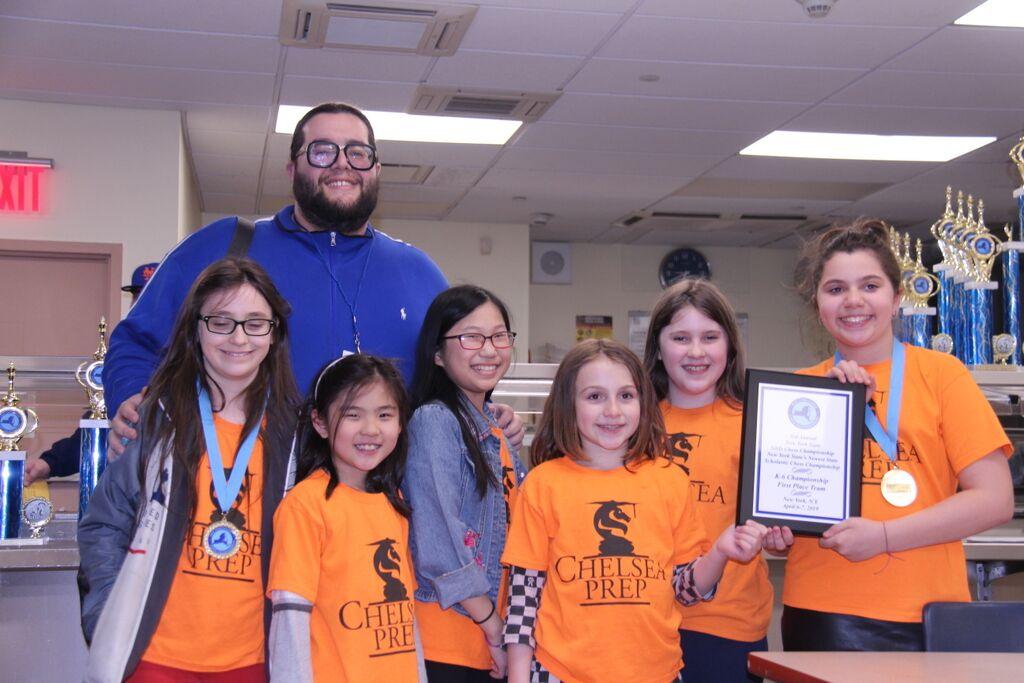 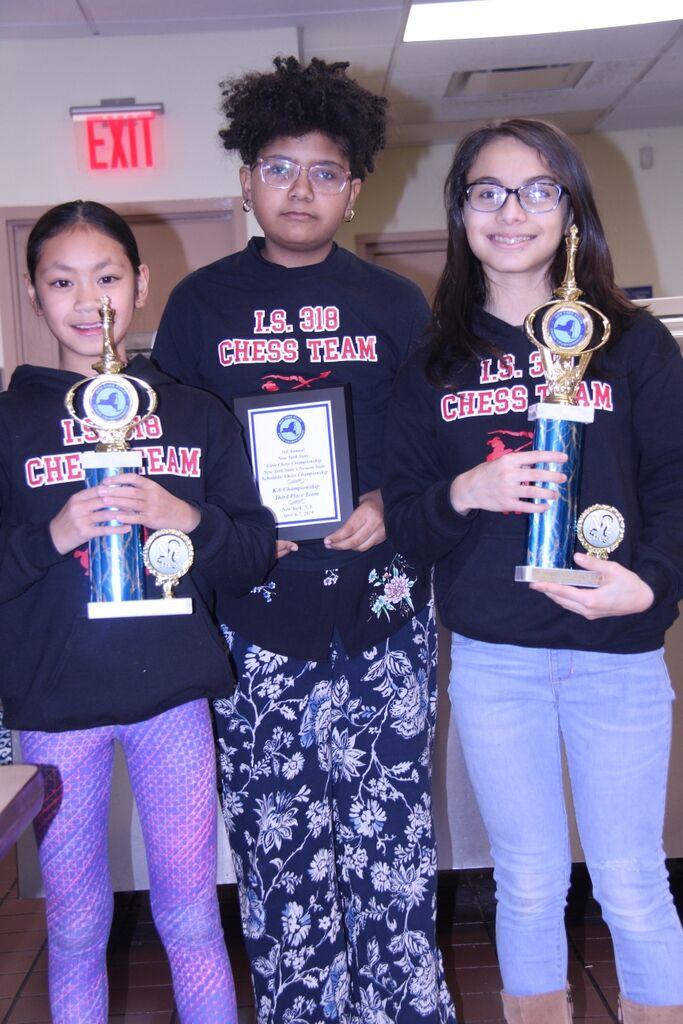 In the K-3 Championship, Nico Alvardo-Yoshida won with 5.5/6. Aliana Fausto was second with 5 points. Lyla Basavaiah finished in clear 3rd place with 4.5. In the K-1 Championship, Hannah Chan and Catherine Ouyang tied for first, each with a perfect score of 5 points (there were only 5 rounds in this section), and there was a six-way tie for 3rd place at 4 points out of 5. To determine the winner of free entries, a playoff was needed, and Hannah won the playoff. In the K-12 U1200 section, Lata Bhattarai scored a perfect 5-0 to win the section. In the K-6 U900 section, both Ariam Daniel and Sophie Schechter posted perfect 5-0 scores. Ariam won the playoff to win the section. In the K-3 U600 section, Amishna Gurung won all of her games to win the section with a 5-0 score. Zaynab Chasmawala to second place with 4.5. The list of free entry prize-winners is at  http://www.chesscenter.cc/apr19/NYSGirlsChampionship-2019-FreeEntryPrizewinners.htm The rating report is at  http://www.uschess.org/msa/XtblMain.php?201904075282.0 The chief Tournament Director was Steve Immitt of the Chess Center of New York. Photos by Neot Doron-Repa