Sam Shankland: The Humble, Belated Beginnings of a US Champion 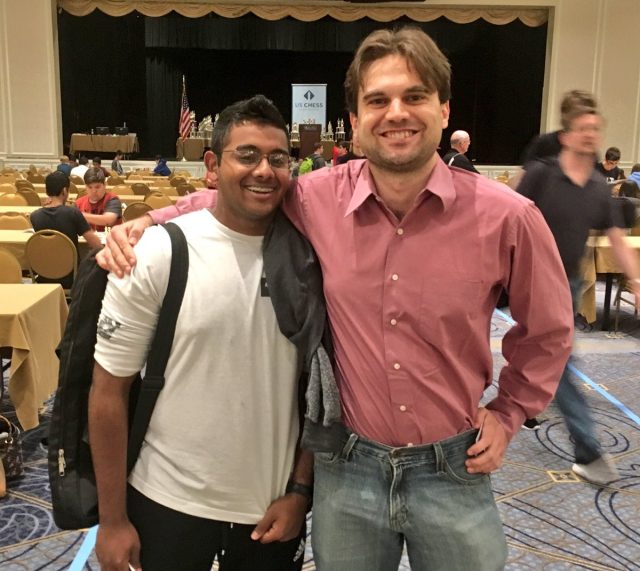 Sam Shankland with the author, Vignesh
The vast majority of the top chess players in the world started playing the game at an extremely young age. Magnus Carlsen, Fabiano Caruana, and Hikaru Nakamura all started learning the rules at or before the age of 5. Sergey Karjakin earned the title of grandmaster at the age of 12 years and 7 months. Sam Shankland completely broke this pattern. At age 26, Sam became the 2018 US Champion over one of the strongest fields ever, including 3 members of the top 10 in the world. He followed that amazing result with victories in the next two months in the 2018 Capablanca Memorial and the 2018 American Continental Championships. I interviewed Sam, as well as one of his earliest coaches and another veteran junior coach in the San Francisco Bay Area where he grew up, to understand the roots of his rise. Full disclosure: Sam has been my coach for the past 6 years and has helped me achieve my International Master title. Unlike every other young chess prodigy turned grandmaster, Sam only started playing tournaments in the later grades of elementary school. By the time he turned 12, Sam was still a D player (under 1400), and hadn’t won any major junior tournaments in Northern California or nationally. About his late start, Sam is straightforward. “Play for the love of the game, and don't be too worried about things that are outside of your control,” he says. “A late start is a handicap, but I hope I have showed that it is not as big a handicap as some seem to believe.”

Yet, his achievement should not be understated. To become a grandmaster is an extremely difficult undertaking, and, as kids get older and older, the pressures of school begin contributing as well. Not many have surmounted the obstacle of a late start, making Sam’s successes even more of an inspiration to the next generations of American chess. FM Michael “fpawn” Aigner, an avid Bay Area chess journalist, has followed Sam’s chess journey since the 2004 National Open. Aigner, who coached many of Sam’s local junior rivals, attributes Sam’s astounding progress to the incredible amount of time and effort he put into the game. He recalls, “For a year and his summers, [Sam] played about 5000 standard games on ICC over 15 months, [so] 10 games a day on average. I’m not recommending that for everybody, but he certainly got the practice.” Standard games on ICC have an estimated time control of 15 minutes or greater for each side. Even if each game lasts 15 minutes on average, that comes out to about 2.5 hours of pure chess games on average per day over the course of a year and a half. Andy Lee, one of Sam’s first coaches at the Berkeley Chess School, also agreed that Sam was a good example of how you need to work really hard to get good at chess. Moreover, Lee also asserted that Sam’s level of self-confidence helped him grow. “[Sam] was pretty confident in his ideas. [One time,] he was playing a dodgy line of the Winawer (French defense) with black. I was telling him that the line is trash, and he said that the line is fine, but that I was just better than him at chess. Some people are hesitant about taking risks, but Sam has always been willing to take up the challenge,” Lee recounts. So, hard work, combined with good coaching and a bold attitude propelled Sam’s rise. Just four years later, a 16-year-old, 2400-rated Sam won the CalChess State Championship in 2008, becoming the youngest player to do so, and subsequently won again in 2009 and 2011. At age 17, he tied for first at the 2008 U-18 World Championships, taking the bronze medal on tiebreaks. At age 18, Sam won the 2010 US Junior Closed, qualifying for his first US Championships. At age 19, Sam achieved the coveted grandmaster title.

Breaking it Down: What can YOU use?

So, what are the main lessons that should be taken away from Sam’s progress? “Progress is not linear. Even Sam got stuck in places,” says Lee. “Even if you’re an average player going into middle school, there’s certainly still a chance you can become a master or even higher,” says Aigner. Elements of Sam’s early playing style continue to appear in his current games, though it has also become more universal with maturity, according to Lee. “He plays much better [when he has the] initiative and that’s always been how he was. He was never intimidated if you were stronger than he was, he would always try to take over the game. That showed up. Every time he got a chance, he seemed to take it.” Sam seems to agree, citing the dominance in his tournament-winning game at the US Championship against GM Awonder Liang. “I really liked my game with Awonder, both because it clinched me the championship, and because it was true to my old style,” he says. “I got a nice edge out of the opening, played clean, crisp chess, and never gave him a chance. I didn't always play the best move objectively, but I kept it simple throughout, and he never had a chance to equalize.” With three clear first finishes in a row in the last three months, everyone is dying to know: How did Sam develop this recent amazing form? “I wish I knew! I've spent a fair amount of time thinking about what kind of change there could have been, and I haven't really come up with any theories - this is a shame because I'd like to repeat the same success!” Even if he did know, would Sam really reveal his secrets? Still, what Sam DOES say reveals the depths of the ambition that have powered his overall rise. “Long term, my goal is to be World Champion. I'm nearly certain to fail, but I will not reach my maximum potential if I don't set my sights high,” he says. “If I aim to be world no. 1 and end up at no. 5, this would be a successful career and would make me much happier than aiming for no. 10 and reaching no. 10.” In other words: reach for the stars, work harder than everyone else to reach goals, and never ever give up. Aigner gives a very simple explanation for Sam’s achievements: “Obviously, [Sam] loves chess.”

IM Vignesh Panchanatham is a writer for BayAreaChess, 2018 US Chess Club of the Year.
SHARE: