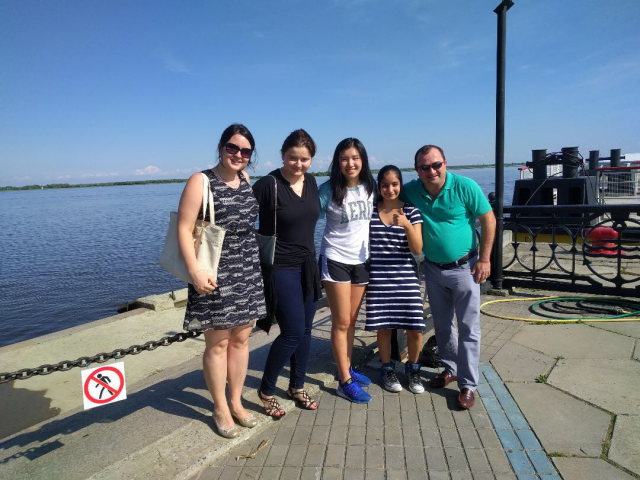 Team USA members: Katerina Nemcova, Sabina Foisor, Jennifer Yu and Akshita Gorti with team coach Melik Khachiyan.
The Women’s World Team Championship came to an end with the thrilling victory of the Russian Team. They won in the final round by a score of 3-1 over Ukraine, spearheaded by victories from Valentina Gunina and Olga Girya. While the home country emerged victorious, the US team had reason to celebrate too. The US Squad came with experienced players in Anna Zatonskih, myself and Katerina Nemcova. The team was completed by promising youngsters Jennifer Yu and Akshita Gorti. We immediately felt the absence of a couple of our top players as we lost a tough match to Ukraine in the first round. In an otherwise drawn match, Osmak Iulija won a long game on board 4 to clinch the match for our opponents. Jennifer Yu's opponent didn’t miss the chance to finish the game with a typical sacrifice. In round 2 our woes continued as we lost to India. I suffered a tough loss against IM Tania Sachdev: Despite these two painful losses, soon enough we were playing at full strength, thanks in no small part to the help of our captain and coach, Melikset Khachiyan. In round 3, we got on the scoreboard after drawing a tense match with Poland. My own game was quite interesting: 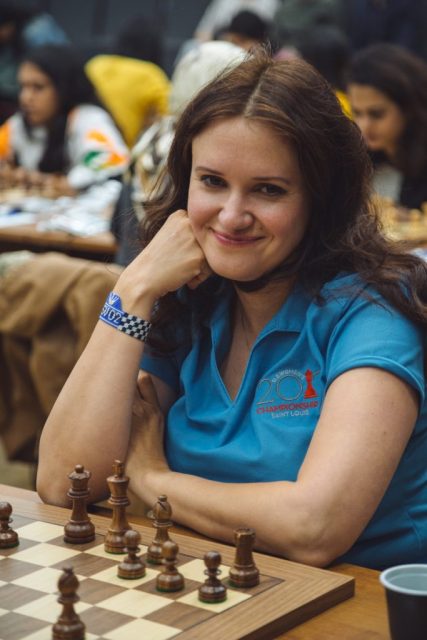 IM Anna Zatonskih, Photo http://ugra2017.fide.com/
Next up for US Chess was Egypt, and we won decisively. I did not play in this match, but I enjoyed watching my teammates, especially since after taking a short run, Anna was already winning before I got back. In addition, our young girls notched critical victories as well. I am sure this is a sign of more great things to come from them. At this point we were in much better spirits; a little better adjusted to the time change, and more confident in our play. Melik in particular was satisfied with the quality of our games. Up next was Russia, the eventual champions and juggernaut squad that seemed untouchable so far. But we were not intimidated. 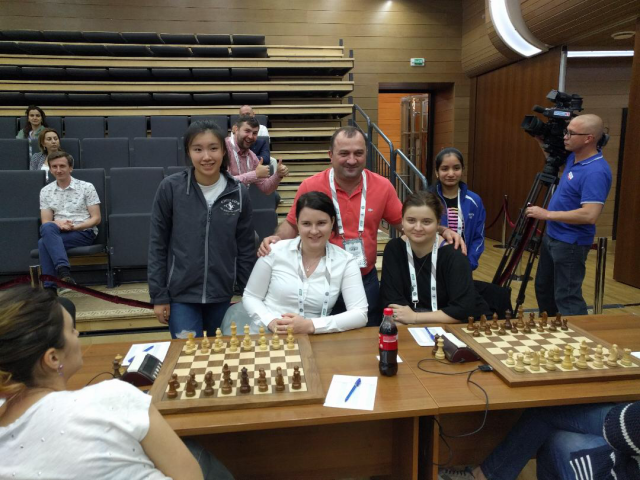 Team USA members, Yu, coach Khachiyan, Gorti, Nemcova and Foisor (plus a photobomb!)
The match was ultimately tied at 2-2 with 4 draws, but this does not tell the whole story. Anna in particular had kept up her excellent form from the first four rounds, and had clear chances against former World Champion Alexandra Kosteniuk. 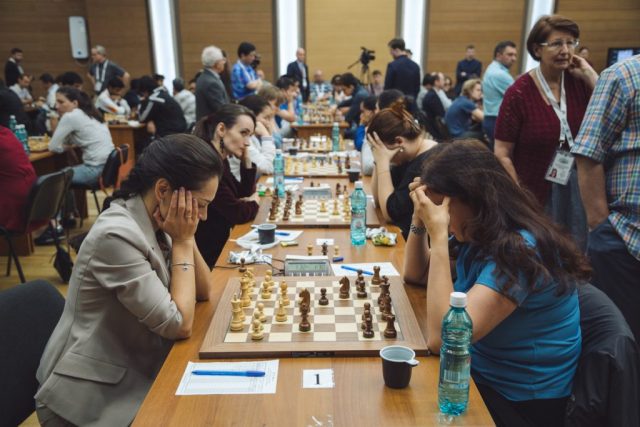 Russia v. the USA, Photo http://ugra2017.fide.com/
My game against former European Champion Katerina Lagno was quite balanced. Akshita had a nice edge from the opening. Katerina defended extremely well to save a long game against Goryachkina, Russia’s youngest player. So even though the match was tied, it very easily could have gone in our favor. 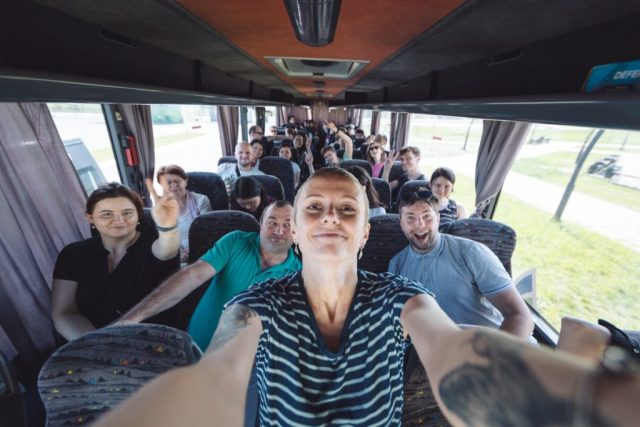 Rest day selfie, http://ugra2017.fide.com
Holding the best team in the world to a draw put us in good spirits going into the rest day. Our team enjoyed a bus tour throughout Khanty-Mansiysk, a very agreeable experience that was well deserved. I particularly enjoyed seeing the mammoth statues, and we also saw the Irkutsk River as well their beautiful church. While it was good to get a breath of fresh air, before long we had to start playing again. Unfortunately, in round 6, we had another tough loss to China. It was a tough break to be playing against the two highest rated teams in a row, but ultimately our Chinese counterparts played better than us. I had a particularly painful loss to the Women’s World Champion, Tan Zhongyi, which was even more disheartening since I did not get my revenge from earlier this year in the World Championship in Tehran. Still, the middle game was a very interesting struggle. While trying to save the match, Katerina made a mistake and lost a tough game as well, but Anna and Jennifer held draws, keeping up their excellent form. Next up we played against Vietnam, and although the match was drawn, things could have gone either way. Do not be fooled by the fact that it looked as if Anna has been almost effortlessly cruising along the tournament.  Hard work and determination were behind her success, but this time she got into some trouble. It is the mark of a champion to play bad positions with the same tenacity as good positions, and she saved it. 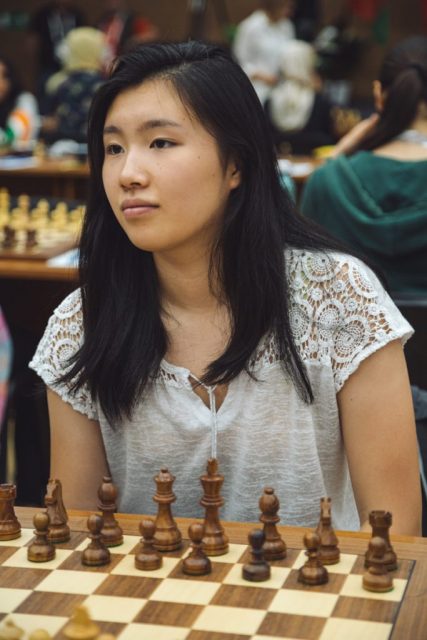 Jennifer Yu, http://ugra2017.fide.com
The hero of the match was Jennifer, who also got a very bad position, but she was resourceful and emerged on top after a wild time scramble before move 40. I’m sure it was a great relief for her to realize she was completely winning once she had the time to really think about the position. I myself had some chances to win the game, but I overestimated the position and ended up giving the advantage away and had to settle for half a point. It was hard to motivate ourselves to keep going when we were still stuck on a -2 score after 7 rounds, but through teamwork and motivation from each other and from Melik, we proceeded on as if it was Round 1. Next up was Azerbaijan, whom we had dead to rights but some disaster occurred in Akshita’s game right before she could force a draw. I played first board that match, giving Anna her first rest of the tournament. She had been playing very well and definitely deserved it! I was delighted to win my debut game on first board for the United States of America. In the final round, we played against Georgia, who will be hosting the next Chess Olympiad. They famously produced strong female teams, and this year was no exception as we faced a 2400+ lineup on all four boards. We lost 3-1, but could have gotten many more points with some better play at critical moments. I missed a beautiful win against Nana Dzagnidze, the current Women’s European Champion. 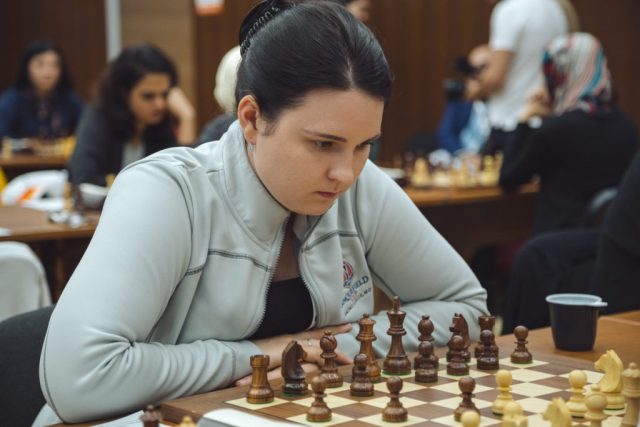 WGM Katerina Nemcova, Photo http://ugra2017.fide.com/
Katerina had an excellent position against GM Bela Khotenashvili, but fatigue may have set in and she did not manage to convert it into a win. Jennifer and Akshita put up ferocious fights, but ultimately succumbed to their higher rated opponents. I was very impressed by these young girls who showed a lot of fighting spirit, especially Jennifer because she played black in 5 of her 7 games. While we finished in seventh place with a final score of -3, this does not tell the whole story. Anna performed extremely well on board 1 and would have won a silver medal if board prizes were given out. I gained 23 rating points and narrowly missed an IM norm, and the young girls proved their worthiness and gained valuable experience that will benefit them as they continue to play for the team in years to come. I’d like to thank my teammates and Melik for his coaching, and I hope to play many more times for team USA.
SHARE: