Rock N Roll and the Ruy Lopez: Over 300 Teams at the World Amateur

Rock n’ roll blasted through the Grand Ballroom during registration for the U.S. Amateur Team East tournament, setting the scene for the intensity to come. The band was Mikell’s Plot, a NJ based band, and the lead singer is playing in the tournament as well. 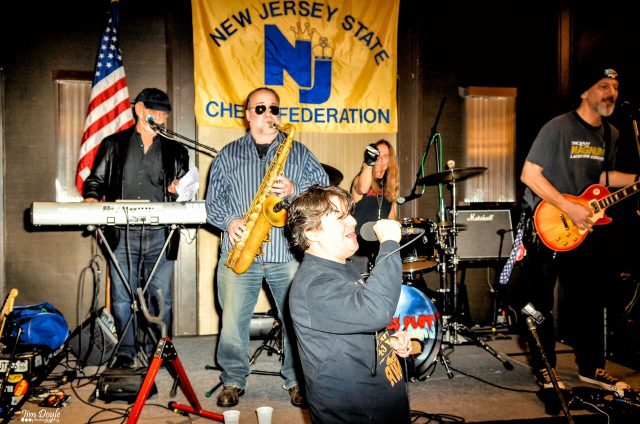 After the music came the cacophony of 1200+ players, crowding into the hotel to play the event. Snow also fell on the first night of the tournament. The World Amateur Team aka the US Amateur Team East boasted a turnout of over 300 teams this year and as always  loads of family-friendly fun. School teams show up to snag scholastic prizes, old friends get together to play their one event of the year, parents play with their children, and in general, everyone seems to have a blast! 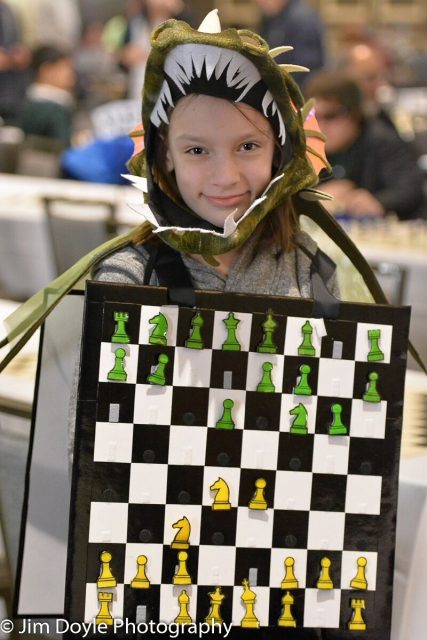 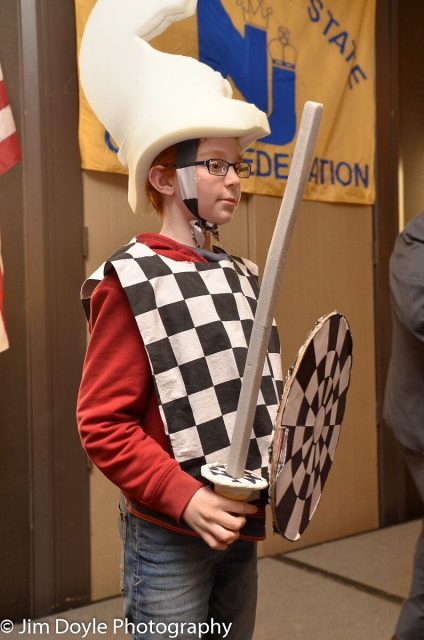 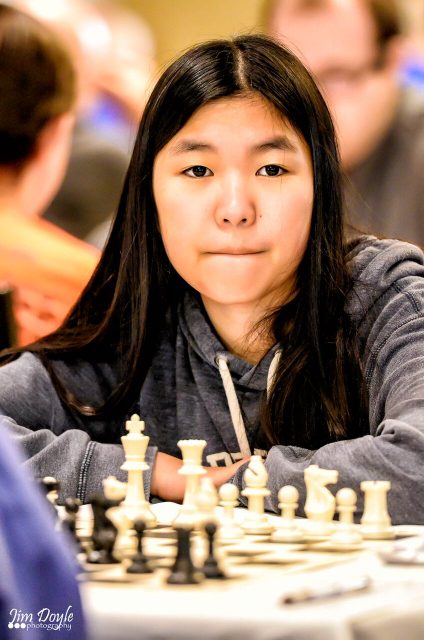 Carissa Yip, Photo Jim Doyle
Going for a Three-peat! Summer Academy for Talented Youth is back again at USATE this year to defend their championship title for the third year in a row. 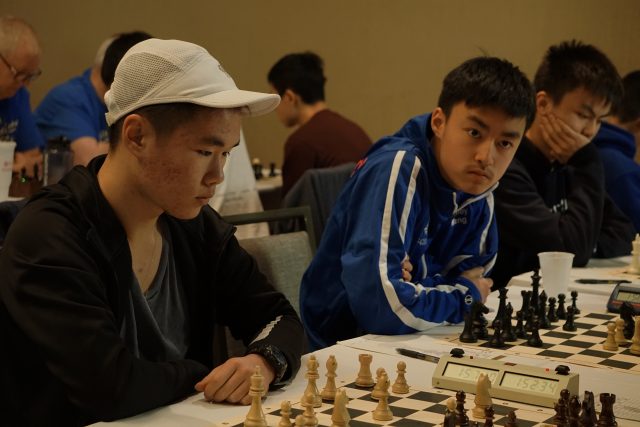 Photo Vanessa Sun
This year, their team features two players who won the USCF’s 2017 Scholar-Chess Player Awards, FM Ethan Li and NM Warren Wang. Li and Wang are boards 1 and 3, with NM Wesley Wang also returning on Board 2. Their board 4 is new addition Ziyang Qiu from North Carolina. It is a promising combination of chess players who clearly boast a camaraderie spanning several years running. 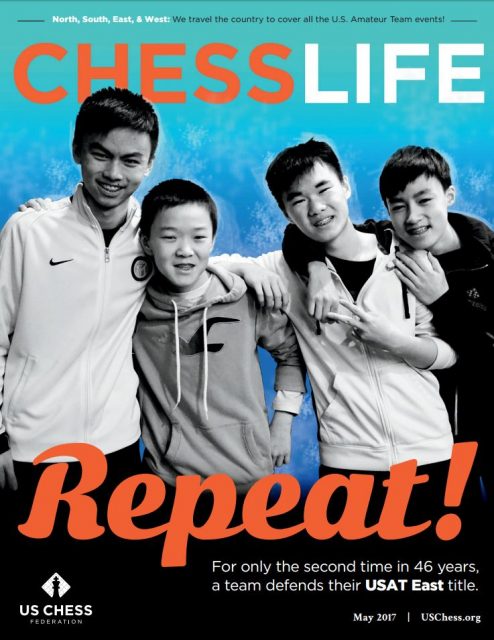 Unfortunately, the team suffered a loss in the 3rd round. Convinced they no longer have winning chance, NM Warren Wang commented that the team is “currently just playing for fun.” For now, let’s say anything could happen, but of course, it is also a tournament where most players aim to have fun whether they are gunning for first or not. Last Year’s Top College Making a Run for It One of the teams eying the first place spot ahead of last year’s champion would be the Carnegie Mellon University Chess Team, a returning college chess teams. They are aiming for the top college accolades again, but also set some higher expectations. 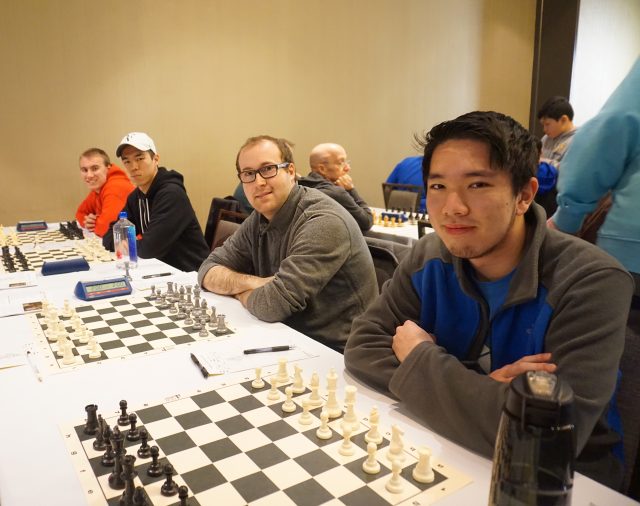 Board 1: NM Grant Xu, 2: NM David Itkin, 3: NM Beilin Li, 4: Ryan Christianson, Photo Vanessa Sun
Board 3, NM Beilin Li, said of the team’s hopes, “This is our best team ever so we are expecting to do very well. We’re looking to win the tournament.” When asked if they would also be satisfied with best college, he replied a simple, “Why not?” It would be a success for the team, regardless. For top college chess team, they are up against four Cornell University chess teams, two Princeton University teams, the Brown University chess team, MIT chess team, and many more. Behind the Scenes of a Military Photoshoot Even with all the chess excitement going on, West Point Academy and the United States Naval Academy were able to finish a photoshoot for Chess Life.  There were laughs, friendly banter, and fun between the two teams. 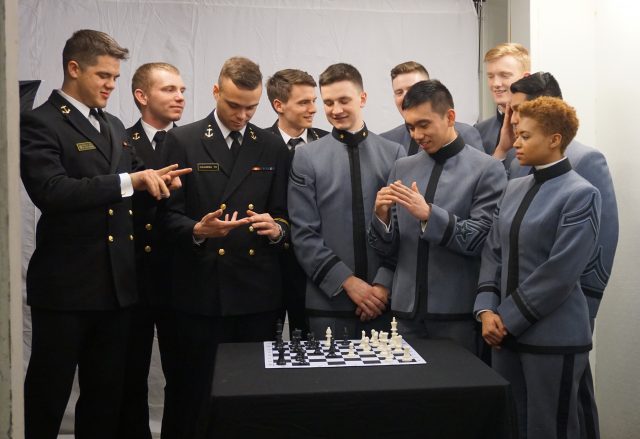 Photo Vanessa Sun
Photographer Jim Doyle has been on site to photograph the tournament and was in his element in the studio. 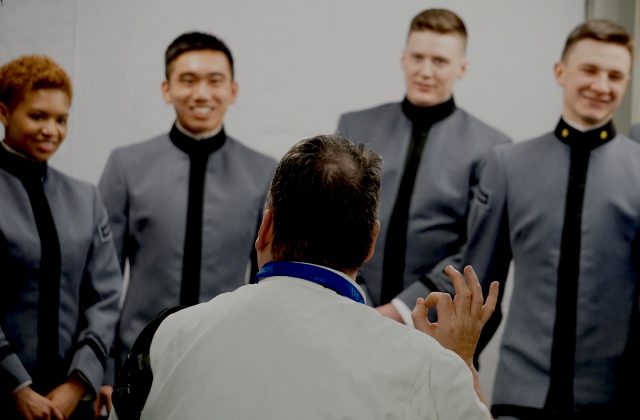 Photo Vanessa Sun
After the photographs were taken, the teams hastened to play their rounds and found out they were paired against each other. 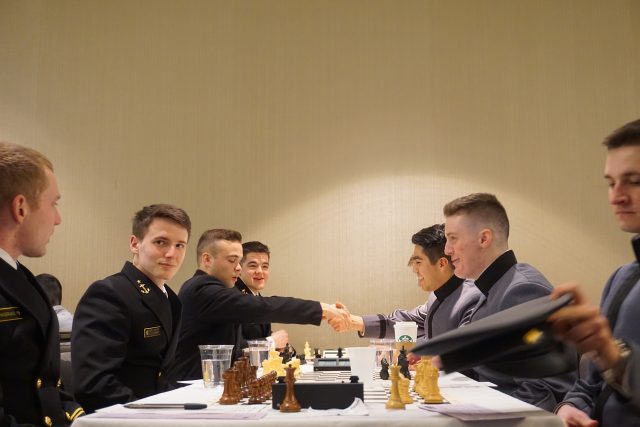 Photo Vanessa Sun
Be sure to look out for photos from the shoot in the Chess Life issue to come! 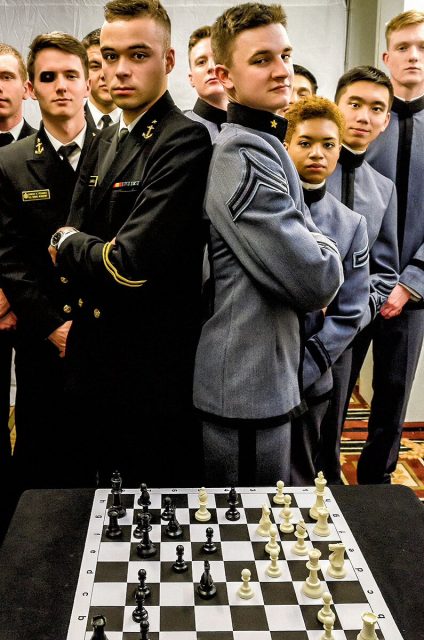 Preview of the Chess Life Magazine cover shoot. Photo Jim Doyle
Showing Off Some “Chesswag” Everyone loves showing off their chess merchandise at tournaments, from creative shirts to hats to scorebooks. One team brought something quite spectacular to their games, though. You’ve seen the Isklar water that GM Magnus Carlsen sports and the Red Bull that GM Hikaru Nakamura drinks, but at USATE, there were goblets that team Knights Who Say Nih brought! 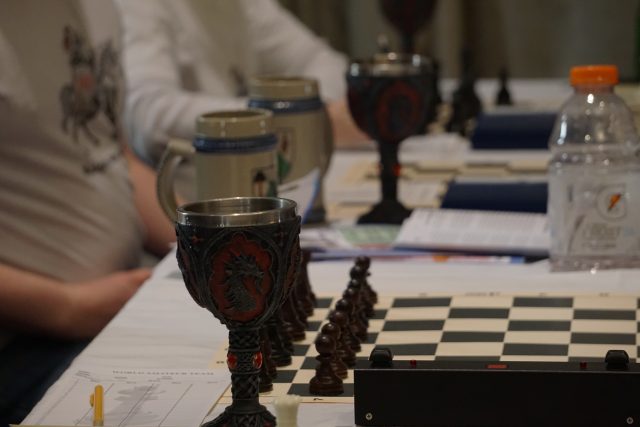 Photo Vanessa Sun
There was also a new vendor at this year’s tournament, selling fun chess T-shirts. These shirts were created and sold by Tim Carney, a full time chess instructor. The side project of his began as he noticed that many chess shirts were strictly marketed to adults with movie references and chess player jokes that young children would not get. He set out to create a line of T-shirts designed specifically for kids. 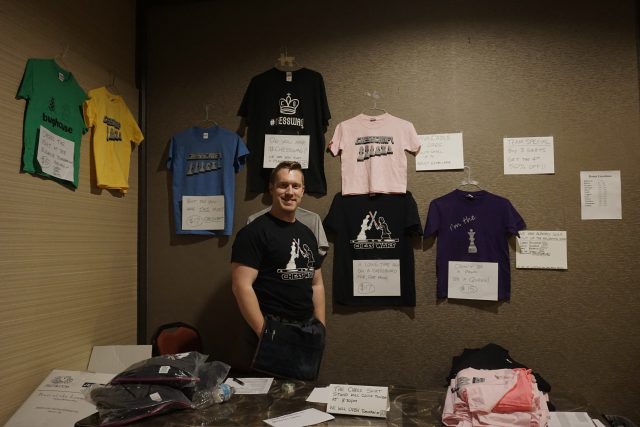 Photo Vanessa Sun
“For my process, I think of what my students are playing with, what games they have on their phones when I asked them to put them away,” said Carney. “My company, Chesswag, is still in the development phase. We’re looking to expand to have a chess website and send shirts to chess clubs around the world.” As for an exclusive sneak peek on the next big idea, Tim wants to share his upcoming shirt theme: Pokemon. Gimmicks and Team Names Before the fourth round of the tournament every year, players look forward to a special presentation/competition full of skits and gimmicks. Kids and teams wear costumes and receive prizes. Sometimes there are live performances with music. This year, Masterman’s Chess Teams won the children’s gimmick by presenting the names of their chess teams, which were in all different languages, as an initiative for Diversity Through Chess. They announced “each team name reflects the cultural identity of at least one member of the team,” with Chinese kids, Hispanic kids, Jewish kids, and more. The winner of the adult section was with a skit presented by the team Our Button is Bigger Than Your Button. The winner of the best team name was Ruy Lopez Just Got Deported. Stay tuned for more updates on our Twitter throughout the weekend and articles on USChess.
SHARE: