Review: Lessons with a Grandmaster III 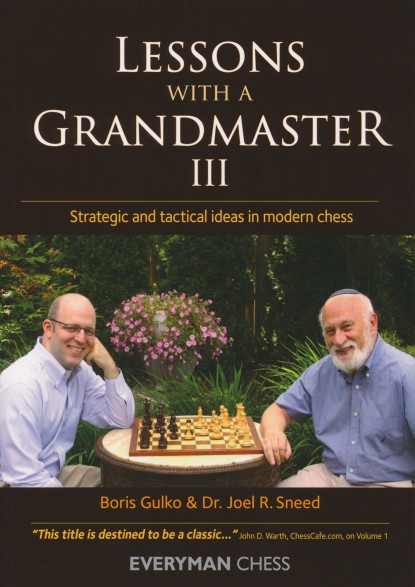 Ever wonder what a grandmaster considers during a chess game? Lessons with a Grandmaster III aims to “bridge the gap between grandmaster and amateur.” It uses a student-teacher conversational dynamic to explore the strategic ideas of grandmaster games. GM Boris Gulko shares his insights while professor of psychology, Dr. Joel R. Sneed, speaks as the 1900-level student. Each game is split into a series of exercises, asking readers what should be done at key moments. This allows readers to evaluate the position and come up with their own guesses. The exercises explore concepts such as: Readers can compare their thoughts to both Joel’s and Boris’. Joel’s thoughts and moves represent the understanding of a 1900 player. His suggestions are sensible and often correct (depending on the difficulty level). However, when he has a question or a misunderstanding, Boris explains a grandmaster’s approach to the position. Boris especially emphasizes using principles to create plans and choose moves. One concept that the book often explores is what factors take priority when two strategic principles come into conflict with each other. Here’s an example:

Exercise: What to play? (difficulty level 2)

Joel states: “Well, getting rid of the rooks seems like a good idea in principle, since that would leave White with bishops versus knights on an open board and pawns on both sides, so I would play 26. Rd8.” This response takes into account the principle: "The advantage of the two bishops becomes most prominent in the endgame when the number of pieces is reduced," which is mentioned at the beginning of the chapter, "The advantage of the Two Bishops". However, Boris mentions a more important principle for the positon and why: “White’s rook on d1 is stronger than Black’s rook on e8. It is not a good idea to exchange better pieces for worse pieces; there is no such thing as an equal exchange.” Unlike the previous two volumes, the authors organize the games by concepts: 10 strategic and 1 about psychology in chess. One of the most thoroughly covered topics is “The Struggle for the Initiative”. The chapter begins with a clear definition of initiative: “when your will dominates the will of the opponent”. Throughout the book, readers are quizzed on how and when to take over the initiative.

Boris explains a key principle to obtaining the initiative: “You have to deserve the initiative. Your opponent has to have done something wrong.” Thus, the pawn break could be refuted tactically with 15…Qf5, "attacking the rook on b1 and the pawn on d5". In the game, Boris actually played 15. Ba3, developing a piece in preparation. In the “Psychology in Chess” chapter, Boris states the key to using psychology to win a game: “to create positions where we understand what to do and our opponent does not.” He then shows a game against GM Walter Browne where he assessed Browne’s weakness, “being unable to rely on his intuition for a position to guide him in unclear situations”. Because of this, Boris steers the opening to an unclear strategic situation where the position is “impossible to solve by calculation”. Eventually, Browne, who Boris admits is a strong grandmaster, makes a mistake. Boris finds a beautiful combination to take advantage.

Exercise: What would you play? (difficulty level 5)

Show Solution
17. Nxf7! “Now all Black’s pieces lose coordination, while White’s pieces are well orchestrated. In addition, Black’s back rank cannot be protected.” If 17...Rxf7 then 18. Rxc8 Bxc8 19. Re8+
The book also focuses on strategic ideas in two openings in particular: the Sicilian Defense and the Catalan. In the chapter on the Sicilian, Boris shows a game with a very clear and useful plan for Black in a common Sicilian endgame. The simplicity with which Boris turns the endgame from equal to better to winning is highly impressive. Here is an exercise from the game:

Exercise: How can Black develop his initiative? (difficulty level 4)

Show Solution
“Black’s rooks are stuck on the queenside so Black has to create play on the kingside… What Black has to do is activate his second rook on the f-file.” 29…Rf8 30. Kd2 f5
I highly recommend looking over the full game. Lessons with a Grandmaster III is an excellent resource to gain the insight of a grandmaster. GM Gulko and Dr. Sneed explore high-level strategic ideas in a way that is understandable to the average chess player. Treating each game as a series of exercises makes the book more interactive than most game collections, which I think is the ideal way to learn. Rank: Excellent (A) Rating Level: 1900 and up *The two earlier volumes are geared for 1500-level and up. You can find the entire "Lessons with a Grandmaster" series on USCF Sales.
SHARE: