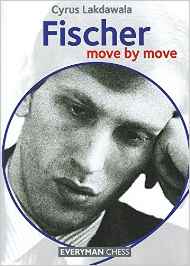 Bobby Fischer is the player we’re somehow both fascinated by and tired of hearing about at the same time. Between Pawn Sacrifice, a Hollywood blockbuster about the genius’ rise to World Champion and fall into madness; Searching for Bobby Fischer, the movie about American chess culture’s obsession with Fischer after he disappeared; My 60 Memorable Games, one of the greatest chess books of all time written by Fischer himself; and the endless number of volumes telling his story and studying his playing style, Bobby Fischer is the most written about chess player of all time. My first reaction to Fischer: Move by Move by Cyrus Lakdawala, was one of anticipation. Fischer is one of my  favorite players to study. His games are masterpieces. And his eccentric life story has always provided an interesting background to his unparalleled accomplishments. My second thought was: In the midst of the many, many books I’ve already seen about Fischer, could this one offer new material? The answer turns out to be a resounding yes. Lakdawala offers a fresh perspective and a decent amount of previously unseen material. He finds a good balance between Fischer’s classic games (in case this is your first step into the world of Fischer) and lesser-known games (for those like me who already own several tomes). Additionally, the energy with which Lakdawala writes about Fischer shows his genuine fascination with Fischer’s games and story: “Bobby Fischer, like Ali, grew bigger than his sport, and he bent our perceptions on how well a human can play chess.” Lakdawala’s enthusiasm makes the book absorbing. I found myself curious of Lakdawala’s point of view of even Fischer’s most well-known games.

Lakdawala often personifies the chess pieces, telling a story through them. Here are a few of my favorites:

This style is going to be hit-or-miss according to personal taste, but I like the attempt to give the games significance beyond variations and principles.

Lakdawala doesn’t attempt to write any biographical material in the traditional sense, but he introduces Fischer by focusing on a few key points, including:

To address the “greatest ever” question, Lakdawala shares a discussion between several titled players and prominent chess writers, categorizing the greatest players by specific abilities. Fischer was considered one of the best in 9 out of the 13 categories:

Lakdawala ends the discussion by noting that: “I can’t say that Fischer was the best chess player of all time, but I do know that his games have almost become the standard by which other great players are judged.”

Years ago, when I played through the games of My 60 Memorable Games, I’d cover the moves with a sheet of paper, analyze the position, make a guess and then compare it to Fischer’s move and thoughts. By actively participating, I felt more engrossed in the games and remembered more of the ideas. It gave me the opportunity to compare my thought process during a game to Fischer’s. The Move by Move question and answer platform makes it easier to carry out this kind of active learning. The book is full of exercises and questions to guess Fischer’s moves, ideas, and alternate variations.

Exercise (combination alert): A variety of motivations, which combined, can be produce a plan which is at cross purposes with our intent. With his last move, Black was too intent on his own plan, oblivious to Fischer’s coming trick. How did White seize the initiative? Show Solution

Often, Lakdawala tries to put himself in the reader’s perspective, posing their likely questions about a move and answering them clearly and thoroughly. Continuing his discussion of Fischer-Geller (1968), Lakdawala poses this question about the move 17. Bxd5!

Question: Isn’t this a purchase of a luxury which costs more than its worth? It seems to me that White’s plan entails grave risk on the light squares, with few other compensating qualities. What about the fact that White gave away his powerful light-squared bishop? Answer: White regains the piece favorably, for the following reasons:

Lakdawala’s focus on verbal explanations and principles instead of variations will suit most readers.

My Favorite Game of All Time

To finish, here’s an exercise from my favorite game of all time, Fischer’s “Immortal Game”.

Exercise (combination alert): Find the move both Byrne and Fischer saw, but everyone else missed.

Bobby Fischer is a challenge to write about because anyone who takes on the task is competing against hundreds of others throughout history to write something fresh, yet accurate. Lakdawala proves up the challenge. Whether it’s your first Fischer book or your tenth, Fischer: Move by Move is worth a read.

Actually this is the one Fischer book I will buy. I never cared much for people's Uncle Remus storytelling. I think the reason for that was that it seemed mostly negative. A person who is interesting in negative qualities about a persona lacks empathy. This book bypasses what we already know it seems, from the review. I've also flipped through some of Lakdawala's previous contributions in the "move by move" series and I liked some of what I saw. I am a little disappointed if "new material" is given just to pique interest, but I'll give it a go. When American players think of Fischer they have a reasonable expectation of "quality". I am sure they have an expectation of avoiding the "I already knew that" material, but we should appreciate, a "fresh look and insight" into the player "I consider to be the best of his generation"(Kasparov shares that opinion, so I'm in good company).
First sentence rewrite: "Bobby Fischer is the player we’re tired of hearing about." Fixed it for you.
I'm reading Endgame now...fascinating! If you're curious about Bobby's life, not just his games, I highly recommend it!
Im reading Endgame as well and it is impressively thorough!