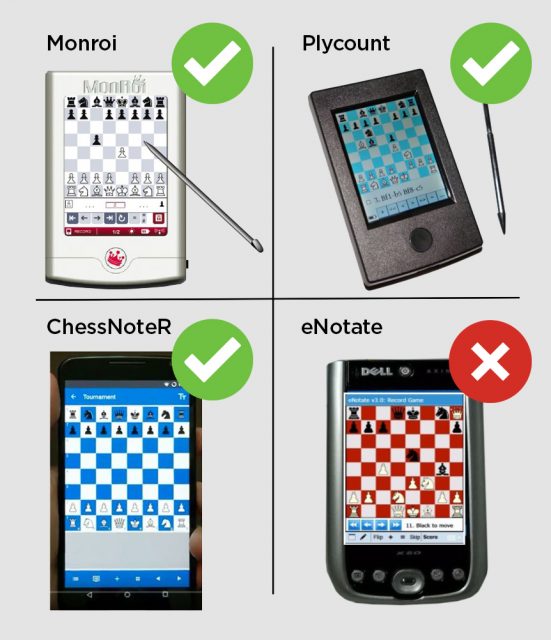 Effective immediately, the US Chess Federation (US Chess) announces that the eNotate chess software, used by some players to record chess notation on an Axim X51, Dell X51, and other compatible Pocket PCs or PDAs, has been removed from US Chess' list of certified means of electronic notation. Unlike other ENDs currently certified by US Chess, the Axim and Dell Palm PC/PDA (and other compatible devices) have the capability to load and directly run third-party, chess-engine software. The eNotate software does not prevent this from happening. More importantly, the standards specified in the US Chess END certification program have evolved to the point where the risk to fair play presented by eNotate-enabled platforms is unacceptable to the integrity of US Chess-rated tournaments. This announcement does not affect the Electronic Device Policy for National Events organized by US Chess published in September 2019.

Q: Why was the eNotate decertified by US Chess? A: eNotate is software that runs on an Axim X51, Dell X51, and other compatible Pocket PCs or PDAs providing a player a way to electronically record their notation. The eNotate software, when running on a compatible Pocket PC/PDA, transforms that platform into a fully functional electronic notation device (END). All other ENDs certified by US Chess are "single function" devices which, when started, only operate as an END. By comparison, a Pocket PC/PDA loaded with the eNotate software requires the user to start the eNotate software after the Pocket PC/PDA finishes its normal startup routine. In other words, after normal startup ends, the user can start compatible third-party chess analysis software instead of running eNotate. It is true that when the user properly starts the eNotate software the Pocket PC/PDA functions similar to other certified ENDs. However, if the user chooses not to start eNotate, the user is free to start a chess engine at their own discretion (see the next FAQ). This fact, coupled with the knowledge that most chess engine software can be modified easily by the user to look similar to eNotate (e.g. the colors of the chessboard, the style of the pieces), makes it more difficult for an opponent or tournament staff to quickly distinguish eNotate software from a user-customized chess engine. Most importantly, the standards specified in the US Chess END certification program have evolved to the point where the risk to fair play presented by the eNotate-enabled platform is unacceptable to the integrity of US Chess-rated tournaments.

Q: Has the eNotate been a problem in tournaments? A: There is one documented US Chess Ethics case where a player was found guilty of running a third-party chess engine (Fritz) on a Dell Pocket PC during a US Chess rated tournament. A sharp-eyed tournament director caught the player after the Chief TD had been forewarned by opponents from other tournaments that the player was, upon occasion, acting strangely with the device (excessive clicking, looking at the screen for extended periods while it was the player's turn to move, achieving a perfect score in the Under sections in sequential tournaments, and routinely defeating players 300 or more points higher). Although it is common for a player or spectator to ask a TD questions about another player's use of an END during a tournament, especially people who are unfamiliar with ENDs, there have been no other END-related complaint cases received by US Chess.

Q: What electronic notation device (END) will be decertified next? A: US Chess does not have any plans to decertify any other ENDs. US Chess’ program for END certification is a "living process" that takes into account advances in technology as well as the results of US Chess and FIDE ethics cases to ensure the policy remains relevant, helps assure fair play, and protects the integrity of our beloved game. In particular, a certified END that is no longer supported by its manufacturer is at an increased risk of losing its certification due to updates to the US Chess device certification program and the inability of the device to be upgraded and resubmitted by the manufacturer for recertification.

Q: How long does certification last for a device certified by US Chess? A: An electronic notation device (END) remains certified until any one of the following three criteria are achieved: 1) The device manufacturer requests decertification; 2) Changes to the US Chess device certification program make it clear that a previously-certified device is no longer compliant; 3) The device manufacturer makes changes to the approved version of their END or its software that change the way the device operates. For example, if a manufacturer provides device owners a software or firmware upgrade that has not been reviewed by US Chess before release, then that release may have the effect of de-certifying a previously-certified END (because the new functionalities have not been reviewed by US Chess). Accordingly, US Chess urges END owners to check with the device manufacturer before they upgrade their device's software or firmware.

Q. If I own a certified electronic notation device am I allowed to use it in any US Chess-rated tournament? A: If allowed by the Chief Tournament Director or Event Organizer, your END can be used in any US Chess-rated tournament. In other words, "device certification" does not mandate use. If, however, the tournament is a US Chess National event, then players are required to use the means of notation provided by the tournament organizer (e.g. personal ENDs or personal scorebooks are not allowed in US Chess national events). This restriction is detailed in the Electronic Device Policy for National Events organized by US Chess published in September 2019. There are exceptions that do allow certain players to use their personal END at a national event. Please see the policy for details of the exceptions.