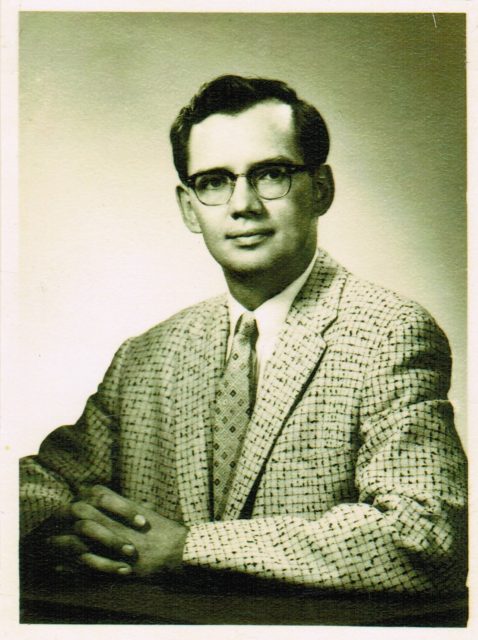 Jim Schroeder circa late 1950s/early 1960s. (Photo: James Schroeder)
2017 will be remembered as the annus horribilis of American chess. The year is little more than half over, and, already, we have lost Grandmaster Arthur Bisguier, World Correspondence Champion Hans Berliner, International Masters Nikolay Minev and Walter Shipman, and three-time Washington State Champion John Braley. Now, one more name can be added to this distinguished list as National Master James Schroeder died on July 8th at the age of 89 in Vancouver, Washington. Few American chess players have contributed in so many ways and for so long as James Schroeder. He was always active in an over seventy year career, promoting prison chess, organizing, tournament directing, publishing, book selling, and playing. Arguably, his most important contributions were through his writing, as a both a journalist and author. We lead off this tribute with a few quotes and a remembrance from National Master David Presser.

"He was scathingly blunt, had never even crossed paths with the concept of tact, and would do anything for you, up to and including the shirt off his back. He also had a wicked sense of humor." -Douglas Ayers (Jim’s good friend who helped him so much his last few years.)

"James Schroeder was my inspiration for prison chess outreach. He was the father of prison chess." -Steven Frymer (Head of the Prison Committee of the US Chess Federation for several decades.)

"I knew him only thru his spicy writings, 'Confidential Chess Lessons.' He evidently loved chess, brought it to prisoners, studied its history, and did a lot for documenting tournaments. He retired the term 'opinionated.'  'Scathing' does not begin to describe his typical book review. But, occasionally one of his intuitions, like so-and-so was better with knights, hit home. Where else will you find a writer who says on one page, Seirawan is a blithering imbecile, and on the next tells you where to send your money for Seirawan's mag?" -International Master Anthony Saidy

(As remembered by David Presser in Cleveland)

I have known Jim since my early teens and first saw him when playing in the Ohio Junior Chess Championship in Columbus where Jim was the tournament director. When Jim moved to Cleveland, we saw each other frequently. One of Jim’s great ideas was a combination chess and table tennis club, which he arranged and which met one evening each week. In 1987 or 1988, he moved to Portland, Oregon, but we remained in touch, and I spoke with Jim for half an hour a few weeks before he passed away. He appeared to be just as sharp as ever.

Jim was married for a time and had a daughter. He served in the Korean War as a radio and Morse code operator. Jim lived on the edge financially for most of his life. He worked in a bookstore for a while in one of the cities of southern Ohio. He tried to survive through chess, but sometimes it wasn’t enough. He told me he sold food at Cleveland Indians’ baseball games occasionally to get by. Jim did come into money once when he inherited $40,000 from his sister, but Jim spent most of the money on donations to prison chess clubs, a charitable endeavor of Jim’s, which lasted several decades. In this way, he helped thousands of prisoners; it noteworthy that the rate of recidivism among prisoners who played chess was very low. In chess, Jim found his calling. He was a strong National Master and had three draws with International Grandmasters to his credit, including a 1958 draw with Pal Benko, who at that time was one of the world’s top 30 players. Jim twice won the Ohio Chess Championship (1950 and 1985). Jim was a successful tournament organizer and chess book dealer. He wrote “Confidential Chess Lessons” for many years and published chess pamphlets, tournament books, bulletins and similar works—a difficult undertaking with only a typewriter. Jim had an encyclopedic knowledge of all aspects of chess and followed World Chess until the last few months of his life. He freely shared his knowledge of chess with many persons and helped some of Cleveland’s top players with their chess development. Although Jim could be irascible, behind that exterior was a very intelligent man with many interests and a large heart. Music was one of his passions! He and I discussed many things by telephone and letter (Jim was old school, no email). Jim’s last gift to me was Grandmaster Yuri Averbach’s autobiography, a treasure that arrived out of the blue last April, a most thoughtful gesture. Jim was my friend. Rest in peace Jim. 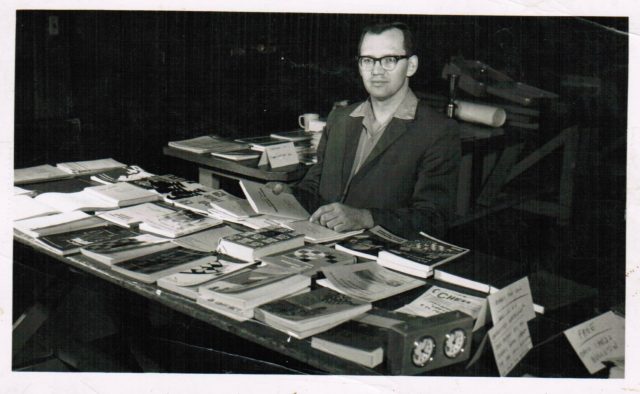 A typical scene at Cleveland tournaments in the 1960s and 1970s is shown here. Jim Schroeder is pictured selling books, many of which he wrote or produced. (Photo: James Schroeder)

We now offer a few of Jim’s games. The first is from the 1991 Oregon Open, which he nearly won. Jim drew the following battle against Lubomir Ftacnik and would have shared first place with the Slovak Grandmaster if he had won from a dominating position in the last round.  That game, played against many-time Oregon Champion James Bricher, is given in the notes.

The following entertaining miniature was played against one of the great gentlemen of chess, National Master James Harkins. 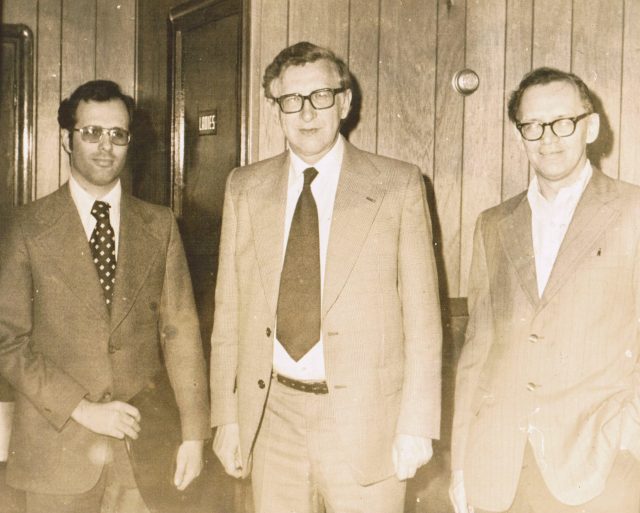 James Schroeder is pictured standing alongside Vassily Smyslov after the latter gave an exhibition in Cleveland in the mid-1970s. The third person in the photo is unknown. (Photo: James Schroeder)
Jim’s triumph in the 1985 Ohio State Championship, 35 years after his first victory in the event, surprised many but was well-deserved. Three players tied for first with 5 points: Grandmaster Anatoly Lein, International Master Calvin Blocker, and James Schroeder. Blocker and Schroeder earned the title of state champions as they were Ohio residents. A half point back were Grandmaster Dmitry Gurevich, International Edward Formanek, Senior Master Sergey Berchenko, and Vivek Rao. Jim advocated playing classical chess to his students (meeting 1.e4 with 1…e5 and 1.d4 with 1…d5) and was known for his skillful handful handing of the black side of the Open variation of the Ruy Lopez and the Tarrasch variation of the QGD (he drew with Benko in the line 1.d4 d5 2.c4 e6 3.Nc3 c5 4.cxd5 exd5 5.Nf3 Nf6 6.g3 Nc6 7.Bg2 Be7 8.0-0 0-0 9.dxc5 d4---A game which we would love to see in full.), but he could also play more modern openings well. Here, he defeats the Cincinnati Senior Master Sergey Berchenko in fine style in a dynamic Sicilian. Schroeder was the first researcher to really take advantage of the famous John G. White collection at the Cleveland Public Library, and he used its resources to produce many bulletins and books on forgotten tournaments. Among his best books was Boris Spassky: World’s Greatest Player (1967), the first work in English on Spassky. The series of pamphlets he produced on early World Championship matches, which relied heavily on primary sources, were first rate. Jim could be brutally honest in his reviews, and, for him, it was never personal. He considered his criticism to be professional and constructive, but those on the receiving end did not always see it that way---friend and foe alike! Tony Miles has the record for the shortest book review – Utter crap. – but Jim was not far behind. His review of The Dragon Variation by Anthony Glyn could have ended after the first sentence: “I have one good comment on this slop: the book is well bound.” Although Jim never learned in a major chess center (his entire adult life spent in Ohio, Oregon and Washington), he knew and corresponded with many top players and considered U.S. Chess Hall of Famer Milan Vukcevich a close friend. It was Schroeder that drove the 21-year-old Bobby Fischer from Cleveland to Toledo when the young U.S. champion was on his 1964 transcontinental chess tour. Schroeder was so impressed with the young Fischer that two months later he arranged to have him give an exhibition in Columbus. Those wanting to know more about this remarkable man will want to read Tartajubow’s article, "The Colorful James R. Schroeder"  and visit the webpage devoted to the man, Isolanis.com. In closing, we note that Schroeder was recognized by the US Chess Federation before the 2012 U.S. Open held in his adopted hometown of Vancouver. US Chess Executive Director Bill Hall sent Jim a very nice letter, specifically mentioning his contributions to prison chess and gave him a free entry into the U.S. Open, the last tournament he would play. Those who had been most active in pushing for this recognition, Grandmaster Yasser Seirawan and International Master Jeremy Silman, were among Jim’s chief targets in his role as a chess critic, but they recognized and respected his contributions to the game.
SHARE:

Is this the same person that…

Is this the same person that I remember would give weekly simuls on the Internet chess club. The reason that I am asking is that when I was a member of the ICC, I would look forward to playing in it even though I was not very good back then ( I am much better now). I did manage to win one time when the game got into severe time pressure and as a result, he hung a rook that was the lynch pin of his defense and the game completely completely collapsed as the hung took let to check and he needed to block with bishop that was protecting another piece that got hung so he was down two pieces under time pressure so he resigned at that point. It was the only time that I ever won in the weekly simul. I remember the last name of Schroeder but never knew the first name so I am wondering if he is the same person.

Can someone let me know by writing to:

Thanks for your assistance and I am sorry to hear that he passed away.