Record-Breaking Turnout at "The Cities"

The 54th Annual Greater New York Scholastic Chess Championships were held February 1-2 at the Marriott in downtown Brooklyn. The New York State attendance record was smashed as 1,640 players converged to compete in the 14 different sections. 5 Championship sections were each 6-round, 2-day events. The 9 varied rating-limited sections were each slightly more hectic 5-round, 1-day events, albeit with a quicker time control. Some players chose to go “all in” by playing 2 separate 5-round events. Many players chose to play “up” a section in order to help their teams in the championship sections. And the tournament ran on time, without a hitch. 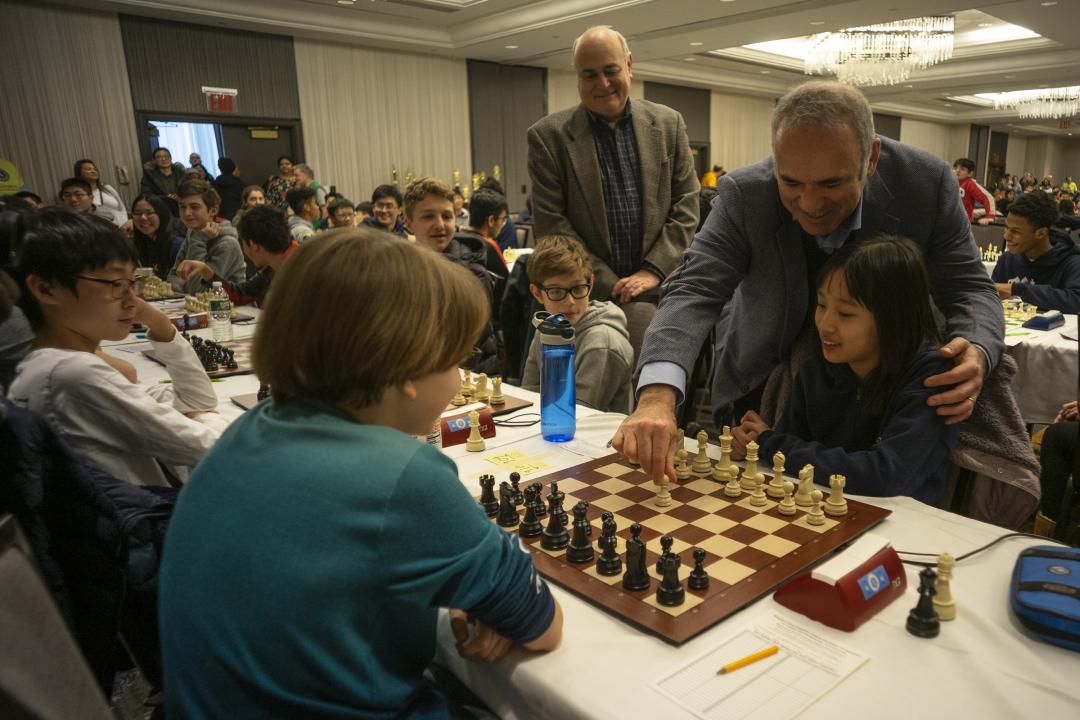 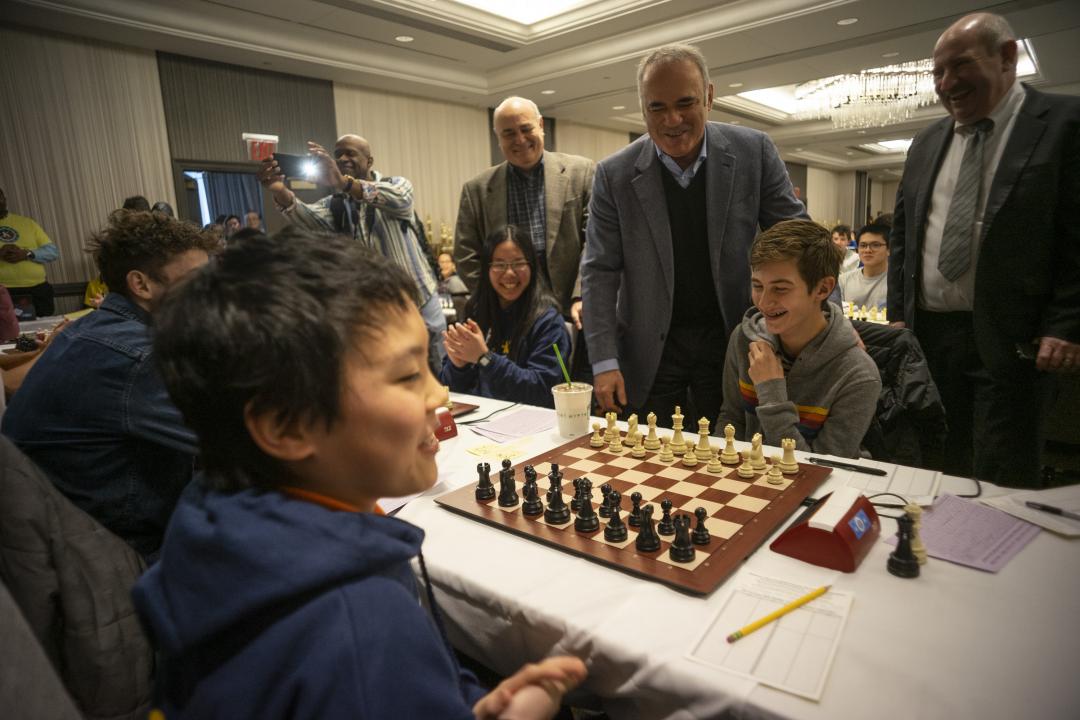 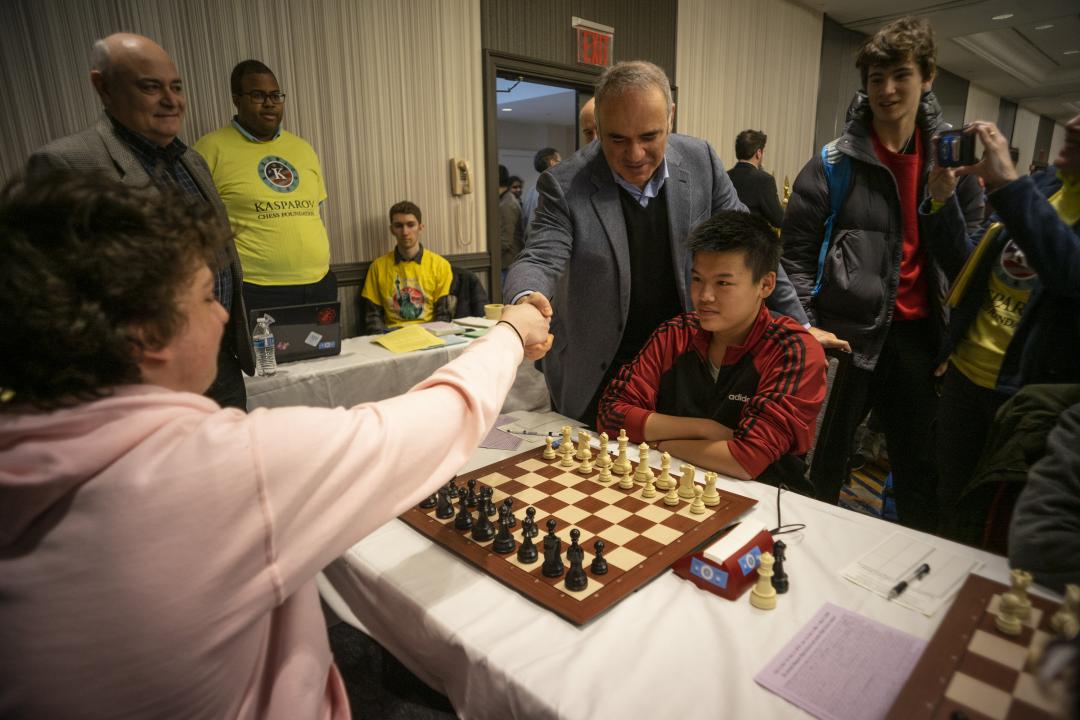 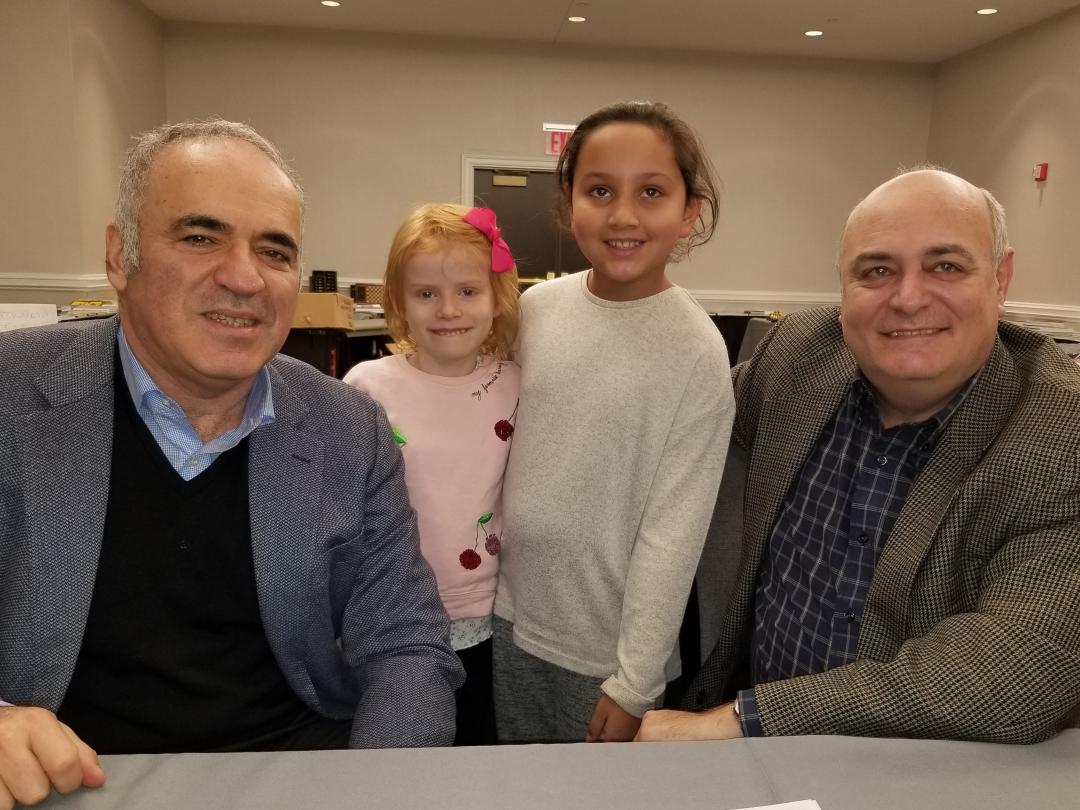 Kasparov, Khodararkovsky, and two young friends!
The “Cities” is a Kasparov Chess Foundation event, and as such, Garry Kasparov was on hand on Sunday, February 2 for a book-signing and to say hello to the many players and coaches that have come to know him as a resident of New York City. Kasparov Chess Foundation outsources the tournament directing functions of the event to the ever-capable Chess Center of New York, which in turn brings in loads of tournament directors to make sure that the event runs smoothly. As the original cap on the number of entries – 1,500 – was blasted through a week before the event, the magic 1,600 number was settled on, and even then, waitlists formed. Even same-day entries lined up at “chess control” couldn’t slow down the juggernaut that the Cities is, as coaches prepared their charges for battle starting at 10 am on February 1. A very popular feature of the Cities is that the top 4 players and top 2 teams in each section win months of free and reduced prize entries into Continental Chess tournaments. This allows promising young players to further develop their talents in major open tournaments, while enjoying huge savings in entry fees. At the Cities, these prizes are known as the “golden tickets!” 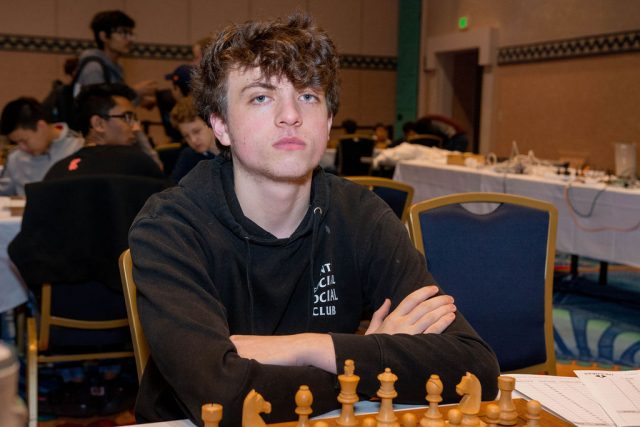 The NYC High School Championship was as strong as it has ever been, headlined by IM Hans Niemann, who had just recently, in December, demolished the “Grades” with a 29-0 performance (including the bughouse and the blitz). But the electric Niemann draws competitors out like moths to a flame; the event featured 8 master-level-or-higher players. Two round 4 games featured players with perfect scores: Niemann converted his advantage of the two bishops against Max Lu, and Vincent Tsay did likewise against Wesley Wang. Then in a wild round 5 encounter, Tsay held Niemann to a draw. 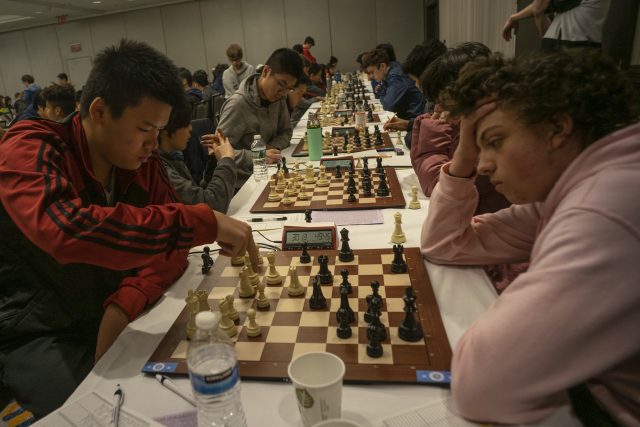 Tsay-Niemann
In round 6, Tsay defeated Max Lu, while Niemann could not get past the solid Justin Chen. Thus, Tsay reached 5.5/6 to become NYC High School Champion. Niemann and Max Jiahua Li tied for second at 5/6. Jericho High School won the Team Championship on tiebreak over Brooklyn Technical High School, both half a point over Columbia Grammar and Prep School. 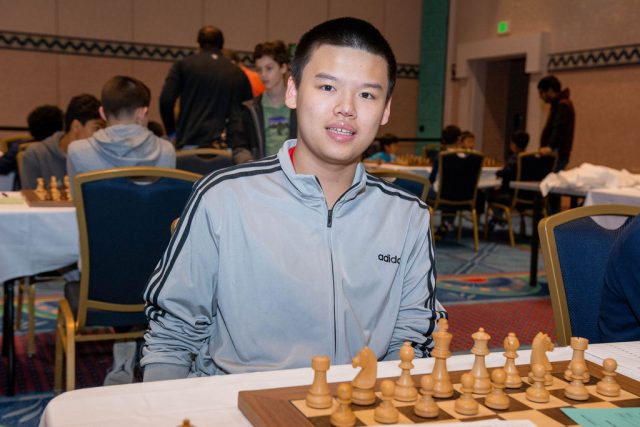 Vincent Tsay (photo Ana Vivas)
After the tournament I had a chance to catch up with Vincent Tsay. I had played him recently in an IM norm event at the Marshall, and a couple of times before that, and Vincent had always struck me as a very solid and well-prepared player. Vincent told me that when he was 9 a friend of the family introduced him to chess. Three years later, he had become World Cadet U-12 champion! Now, as a 14-year-old 9th grader, Vincent was drawn to the Cities, first of all, for the prospect of winning a scholastic title and the free entries to major tournaments which the title confers, and also because of the challenge it represented, mainly due to the number of very strong competitors, but particularly because Hans Niemann was playing. In their complex round 5 game, after an unclear piece sac by Niemann in the late opening, Vincent thought he might be winning. But by move 27, Niemann had engineered a strong attack. Then an inaccurate sequence allowed Tsay back into the game and it was later drawn. Vincent tries to play “in the moment,” meaning he tries to and can adopt any style depending on what is most appropriate. He takes online lessons with the great teacher Gregory Kaidanov. Vincent is planning to utilize his “golden ticket” prizes at the upcoming Southwest Class, and also at Foxwoods in April. He likes the site chesstempo.com, and likes to read endgame books and game collections. Vincent has one IM norm, and is very aware that as a 9th grader, the schoolwork and requirements will only become more intense in the next couple of years. He plans to play a lot this summer. Aside from all of the massive work that Vincent has put into chess, he spends almost as much time on music! Vincent is a classical pianist who has appeared twice as a soloist at Carnegie Hall! 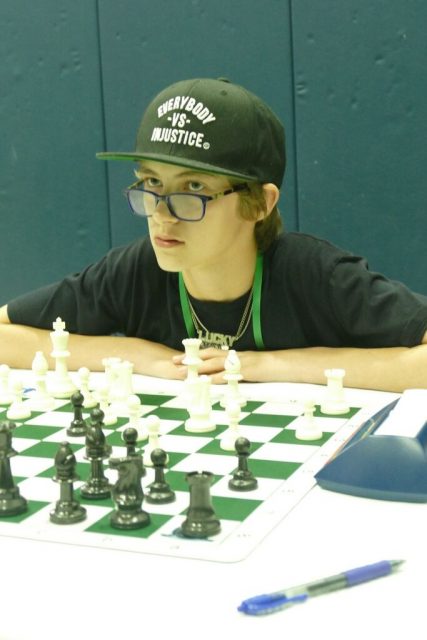 Nico Chasin (photo David Hater)
The NYC Junior High Championship was won convincingly by Nico Chasin with a perfect 6-0 score. In round 5, Nico was in major trouble against Liran Zhou, but was able to artificially castle, and the clock came to Chasin’s aid, as Zhou could not figure out how to break through. And in round 6, Chasin defeated Merric Hu in an aesthetic interpretation of the Taimanov Sicilian. Nest + m School won the Team Championship, a point over Jericho Middle School and Hunter College High School. I spoke to Nico after the event. Nico grew up in the chess milieu of PS 41, which is a block away from the Marshall Chess Club. Now as a 7th grader at Baruch Middle School, where his new friends are mostly non-chess-players, Nico has many diverse interests. He loves playing ping-pong (table tennis) and, in contrast to most chess players, enjoys public speaking. Nico also plays the flute, and his other favorite sport is running. Amazingly, Nico has been studying chess with Georgi Kacheishvili for 6 or 7 years! He is appreciative that, in response to his victory in becoming NYC Junior High Champion, Georgi didn’t mince words with congratulations, and instead told him that he “played terribly” and that they needed to get back to work! When I pointed out to Nico that, like him, I had played Merric Hu in a last-round game (at the Empire City Open) in which Merric had played his favorite fianchetto against the Taimanov Sicilian, Nico generously shared some of his own home-cooked analysis. And often at the Marshall, if I get away with some cheap win against someone, Nico will, in true Kacheishvili style, be there with the report that in fact, Stockfish says that I was actually dead lost! In the Elementary Championship, Liam Putnam and Brewington Hardaway each won their first 4 games. Then in round 5, Putnam defeated Iris Mou while Hardaway won against Chloe Gaw. This set up a showdown between Putnam and Hardaway in round 6. Hardaway secured an edge as Black in a Sicilian after Putnam mixed up his lines. However, Putnam held steady and the game was agreed drawn on move 34. Meanwhile, Alexander Wang, who had 4.5/5, won against Iris Mou and thus a 3-way tie between Putnam, Hardaway and Wang at 5.5/6 resulted. Putnam won the 1st place trophy on tiebreak. Speyer Legacy School, led by Hardaway, won the Team Championship, a half-point over Lower Lab School and a full point over Success Academy Hudson Yards. Liam likes to play in a lot of tournaments and can often be seen at the Marshall Chess Club in New York City. Liam’s mom and dad share the driving duties from his home in eastern Long Island. This also often means a late-night drive home as well. Denizens of the Marshall CC have had the privilege of watching Liam become a master, and it also has become very clear that Liam enjoys the blitz and banter of the Club. Liam is home-schooled and currently studies chess 4 hours a day. He used to take online lessons with Larry Christiansen, and it seems to me that part of Liam’s attacking style derives from the Christiansen influence, but he feels that he is making good strides with positional chess as well. Liam said that online lessons are as good as in-person lessons, and nothing was lost in translation. However, he has chosen for now to study chess on his own. Regarding the openings, Liam feels that he knows both a little about a lot of different openings, and a lot about a select few. His favorite book is Bobby Fischer’s My 60 Memorable Games. Liam plans on using the golden ticket for one thing to go to the Southwest Class. His favorite player is Levon Aronian, although he also stays abreast of the games of Carlsen, Caruana and Nakamura. In his last round game against Brewington, Liam actually mixed up some lines against Hardaway’s Sicilian Kan, and Brewington got the better position. Liam fought back, and in a tense position on move 31, the players agreed to a draw, thus both tying for first. Liam’s favorite sport is basketball. 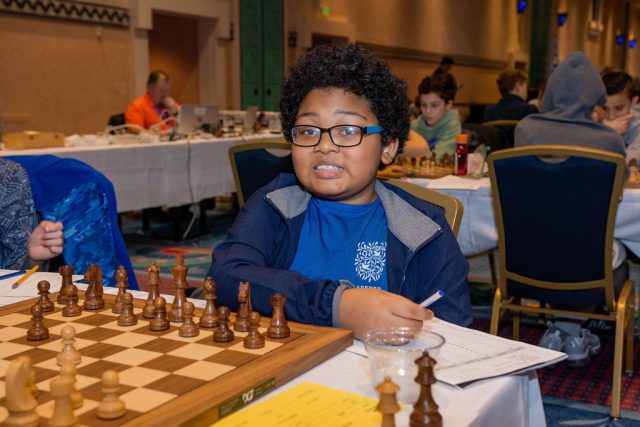 Brewington Hardaway (photo Ana Vivas)
Brewington Hardaway is a 5th grader at Speyer School. In addition to becoming NYC Elementary Chess Co-Champion, he led Speyer to a first-place team victory as well! At Speyer, Brewington studies with John Fedorowicz, and when he gets a chance, he takes lessons with Jay Bonin at the Marshall. Jay has always been very complimentary of Brewington’s tactical ability. I am not sure, but it wouldn’t surprise me if Brewington becomes a puzzle rush enthusiast. In the last year, Brewington has gained 300 rating points and became a master, so it looks like he is becoming well-rounded stylistically. Brewington commented that the 4th round of this event was a tough round for his team, and that made the race for the team prize close, but that then his team rebounded. He seemed to relish the leadership role that this event allowed him to play. In his critical last-round game against Liam, Brewington skillfully parlayed his Sicilian center into an advantage, and pressed it as much as reasonably possible before settling for the draw. On the trip to Florida for the “Grades” a couple of months ago, I sat near Brewington and his family on the plane, and Brewington never seemed to tire of playing blitz chess on his device. Brewington says that he is going to use his golden ticket for the World Open and some other tournaments in the Northeast. Right now I am more worried about facing him in a blitz tournament. In the Primary Championship, both Daniel Kastioukevitch and pre-tournament favorite Bobby Qian posted perfect 6-0 scores! Daniel won the playoff to become NYC Primary Champion! Dalton School won the Team Championship. In the K-1 Championship, Kyle Dong took first place with a score of 5.5/6. 6 players tied for 2nd place with 5 points. Hunter College Elementary School won the Team Championship. A full list of individual and team prize winners, and games from the top boards, is available at the tournament website gnyscc.com. In addition to the Championship sections, the website details the results of: High School U1900, High School U1200, Junior High U1300, Elementary U1500, Elementary U1100, Elementary U700, Primary U1000, Primary U600, and K-1 U400. 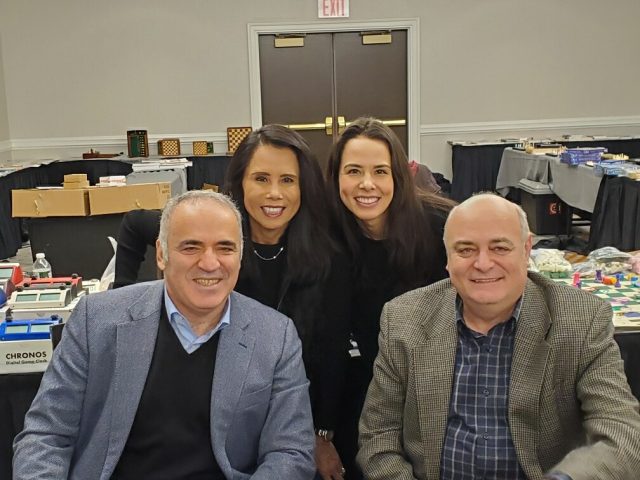