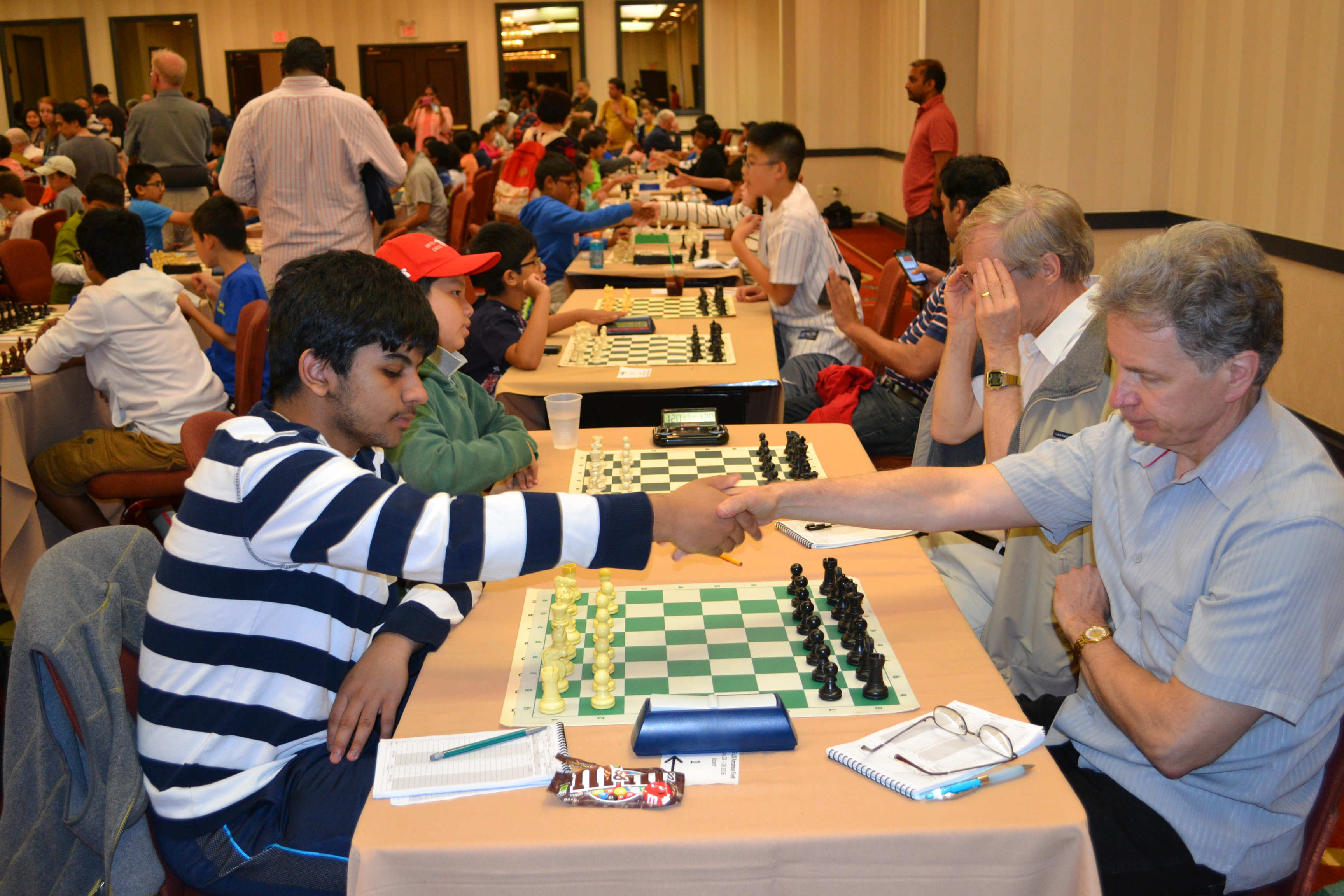 US Amateur East co-champion Keshav Rao vs. Stephen Hrop  in the sixth round
Could the graybeards win out in the end? Could they really rebuff the unrelenting challenge of the Snapchat and robotics generation, brought up on 3500-rated computer chess engines and hundreds of online games a week? The top section at the US Amateur East this past weekend teemed with highly rated school players whose cherubic faces sometimes seemed barely to rise above the green and beige paper chessboards. The kids concentrated for hours when it seemed they should be playing weekend baseball—or at least soccer—in the schoolyards and parks. Their disappointed grownup opponents would have preferred for the youngsters to be out in the sunshine. Between sharp moves, the precocious tykes sometimes, in a voice too soft for senior ears, offered a draw (rarely), jittered (mostly silently), crinkled their Snickers wrappers (sometimes a bit less silently)—and found tactics, a specialty of the talented young—to scythe through much of the older field. But surprisingly, the sixth and final round revealed that four of the six still in contention for that national title, the one that puts you forever in the yearbook, were wizened warriors in their sixties. Only two of the wunderkinds—as White on Boards 1 and 2—were in the otherwise wrinkled group of hopefuls. The Board 1 and 2 matchups highlighted the generational divide. At the top, the 2003 Amateur East Champion, sexagenarian Stephen Hrop played against high school freshman Keshav Rao. On the next board, Vinko Rutar, currently in the top 100 of rated players 65 and over, faced 11-year-old Winston Ni, who in round five had beaten 2008 Amateur Champ Hanon Russell. Both Hrop and Rutar were a half-point behind their young opponents, whose only imperfection was a draw each other in round four. Rao stymied Hrop’s run at a second title by splitting the point. Likewise, Ni’s draw blocked Rutar from a share of the honors. On board three, your 69-year-old writer also had Black, against a somewhat younger adult in his sixties. But I might have been better off against one of the juvenile hotshots, because I faced Jon Edwards, a correspondence IM who recently made his GM norm while qualifying for the candidates matches toward the world championship. (Wait, this is the US Amateur, right? Well, Jon’s over-the-board rating is below master.) Both of us needed to win. Nothing drives home the point that chess is a zero-sum game like playing for a national title, or at least a share of it, in the final round after a long series of battles, when a draw is not a palatable option for either player. Even though Jon had to move every few minutes rather than every few days, he eventually overcame a tactical slip that had cost him the Exchange to win a very difficult and instructive endgame—the specialty of old chess warriors—to finish with five points and a share of the title. Teenage Rao won four games, including the following Benko Gambit victory, and took the first place trophy on tiebreak. US Chess nationals award the trophy on tie-breaks but recognize the top score group as co-champions. Edwards took the second place trophy, a salve for the stiff joints and aching muscles of the “Not Quite Over the Hill” gang. Ni got the third-place trophy and went from A-player to Expert. As rapidly as some of these youngsters progress, we may or may not see him next year at the Amateur, since it’s a brain-party for only those below 2200. Hrop finished fourth. Rutar won the fifth-place trophy, after losing the first round of his first try and re-entering. The top section attracted 64 players. Vincent Tsay won the Under-2000 trophy. Yuvanshu Agarwal won the Under-1900 prize. David Han (who had the best tie-breaks), William Yang, Marko Van Selous and Allen Fu tied at 5-0 to top the 58-player Reserve section for those Under-1800. Thirty-eight players competed in the Booster section. Justin Wu topped them all with 5 ½ points, going from a rating of 1273 to 1420. New Jersey State Chess Federation tournaments in Morristown are a chess player’s bliss, regardless of your age. Deftly run by Aaron Kiedes and Dov Gorman, with a hand from Noreen Davisson—and a great spread of Fred Wilson’s books new and old, tended by the nation’s most famous bookseller himself—, the events offer top-flight playing conditions in the tournament hall. The site is in the middle of the historical town. Dozens of restaurants and shops are across the street or around the corner. There’s a picturesque town-square park, the site of George Washington’s headquarters during his first encampment. And no views of an airport parking lot. Consider playing in the upcoming New Jersey Open there over Labor Day. I’ll be playing, so say hello—you’ll find me among the old guys. And speak up a little, please. Find full results and rating changes on MSA.
SHARE: