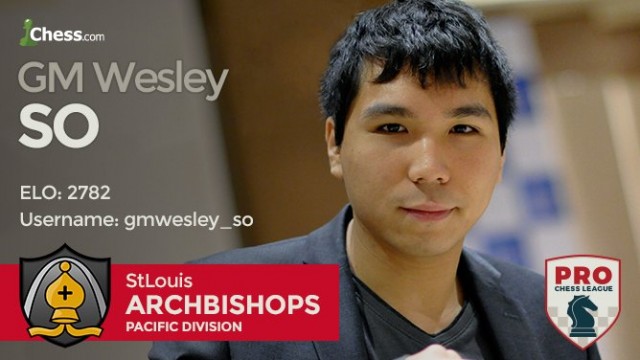 Last season's MVP, Wesley So.
Where can you see Magnus Carlsen at his best one week, scoring a perfect 4-0 against a team of mostly grandmasters, and at his worst another, blundering his queen to a one-move knight fork? Where can you watch elite GMs and amateur competitors compete side by side? Where can you experience the highly anticipated head-to-head battle between World #1 Carlsen and World #2 (at the time) Wesley So, as their teams duke it out for the championship title? Where else can you witness a sub-2200 (FIDE) player like Nicholas Rosenthal trounce a world class grandmaster like Maxime Vachier-Lagrave? Only in the PRO Chess League. This exciting worldwide team competition returns tomorrow---with a brand new format! Due to the popularity of the league, the league will be structured differently. Twenty-four teams have been automatically invited into the league based on their performance last year, including teams like the returning champions, the St. Louis Archbishops (led by Wesley So) and the 2017 runner-up, the Norway Gnomes (led by Magnus Carlsen).  Eight more teams will be chosen from two regional qualification tournaments, taking place on Saturday, October 28. One qualification tournament will feature teams from the Atlantic & Pacific Divisions while the other will feature the Central & Eastern teams. While this year the format is changing, the main draws of the league remain the same: 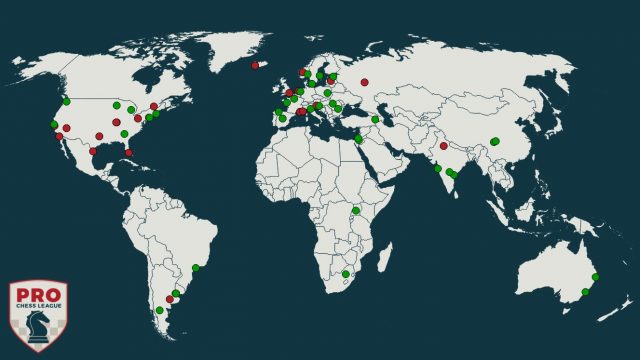 PRO Chess Teams from all over the globe! Red = 24 teams seeded into the regular season. Green = 40 teams competing for 8 qualification spots on Saturday

Although the Atlantic/Pacific Qualifier has less teams playing, the ones that are competing are particularly strong. The top seed is the Seattle Sluggers, led by World #10 Hikaru Nakamura, and the only team that enters the tournament with an average rating above 2500. World #16, Yu Yangyi, will be competing with the Chengdu Pandas. GM Ben Finegold, who competed on the winning St. Louis Arch Bishops last year, will now be playing for the Atlanta Kings. Here in California, I'll be rooting for the San Francisco Mechanics, who are based in my favorite U.S. city and led by GM Daniel Naroditsky, author of two excellent books, Mastering Positional Chess and Mastering Complex Endgames. Another well-known chess author, GM David Smerdon, who wrote Smerdon's Scandinavian and is currently working on a book about chess swindles, will be competing for one of the two Australian teams, the Australia Blitzkrieg. 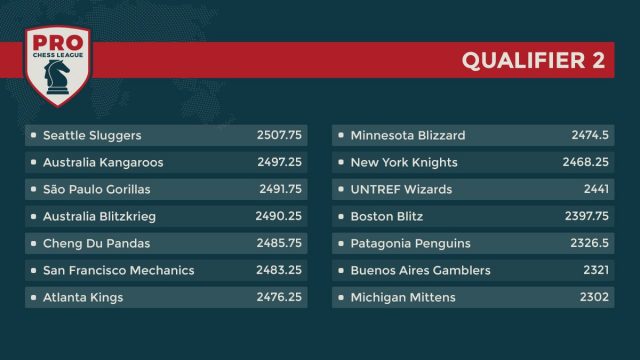 In the Central and Eastern Divisions, I'm most excited about the two particular teams, both of which have strong line-ups and have been very active on social media in anticipation of the PRO Chess kickoff: https://twitter.com/Hyd_Hawks_Chess/status/921659940023959552 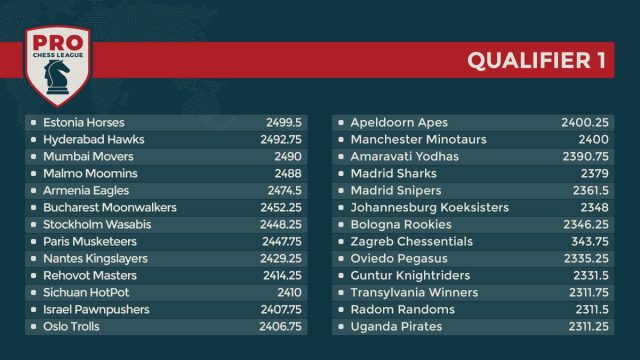 How do teams qualify?

The qualification tournaments will have team members compete as individuals (Yes, team members may end up playing against each other), and then the team's total scores will be tallied at the end. Six teams will earn qualification spots by reaching the top 3 of each tournament. The final two qualification seats will be decided by one of the most fascinating aspects of the new format: Fans will get to choose!

"How about the final two teams? They will get in with a little help from their friends... A fan vote will take place (full details at the rules page here) within a few days after the event. Teams will have time to submit pleas to fans on social media, create videos and interact with the Chess.com community in any way they can to drum up support! A poll will then be placed on the Chess.com homepage for 72 hours and the magic will begin!" -Mike Klein, “PRO League Qualifier: 40 Teams Vie For 8 Spots”

Viewers may have mixed feelings on choosing the final two teams based on fan appeal, but consider this: Follow all of the excitement tomorrow, featuring live games and commentary starting at 8 a.m. PST on Chess.com/TV: For more information, visit: