Priya Trakru on the US Chess School: Power Queens 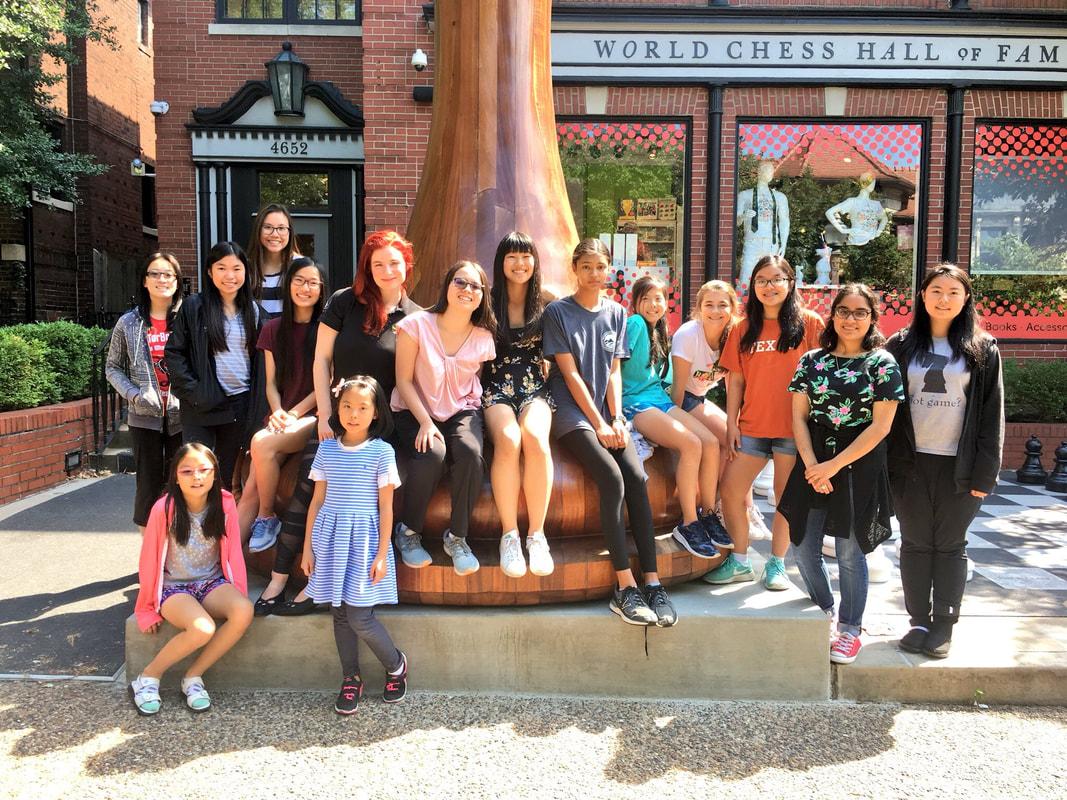 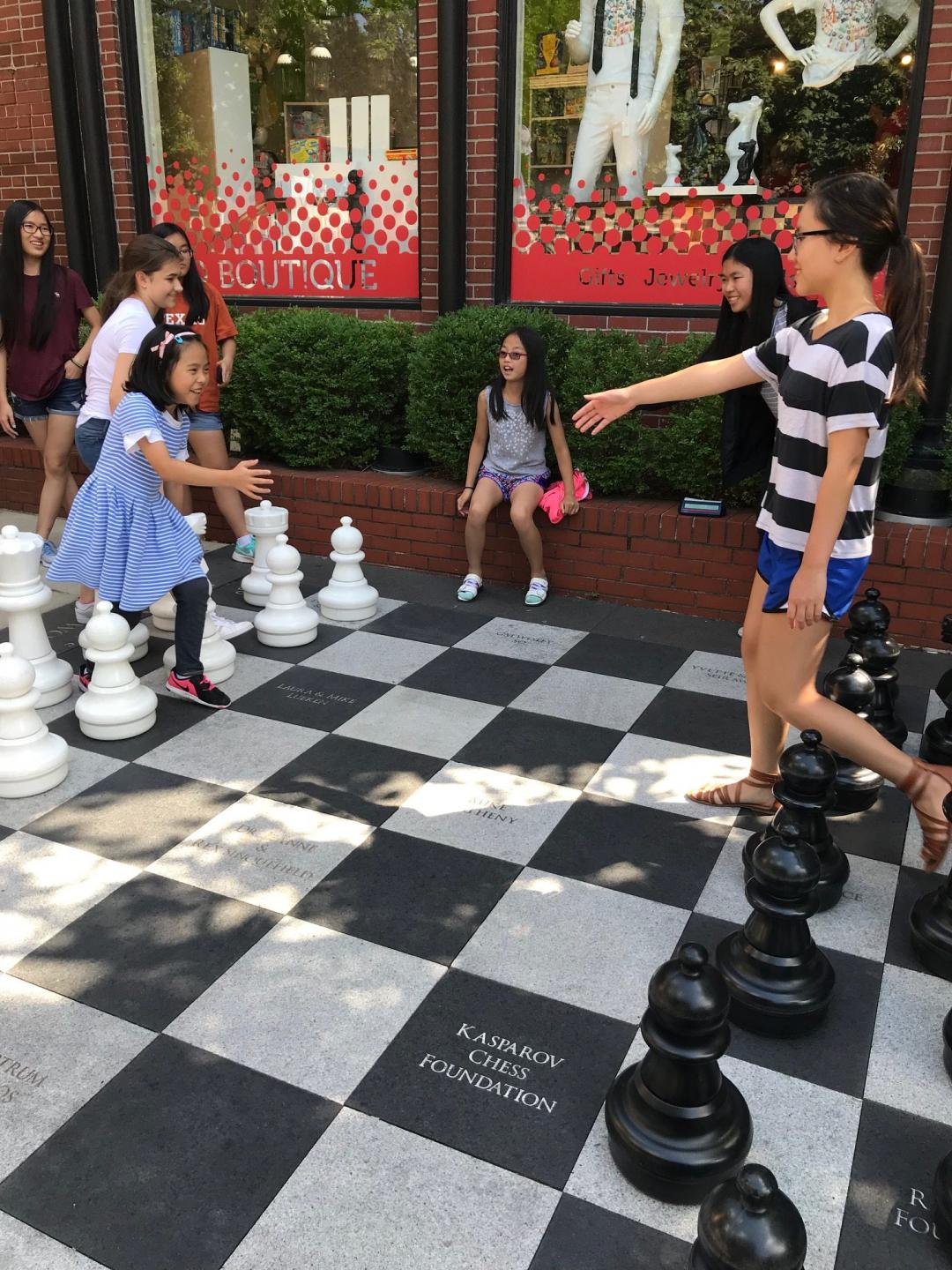 Rachael Li and Emily Nguyen, both of Texas, shake hands

At US Chess, the ratio of boys to girls in tournaments is 6 to 1. This means that more often than not, I can be the only girl (or one of the only girls) in a chess tournament. The astounding statistic (which"> US Chess Women is working to change!) does have a silver lining; because of their shared situation and passion, it’s easy for girls to bond and create strong friendships. US Chess School 45 brought girls from all across the country together to form bonds that would last the entirety of our chess careers. Towards June, right as school ended, my brother and I applied for the USCS- my brother was to attend 43, and I'd attend 45. I was slightly nervous, as this would be the first ‘all girls’ camp I would ever attend. I was also beyond excited. The camp was held from July 23-26 at the famous Saint Louis Chess Club and coached by the incredible brother-sister duo IM Greg and WGM Jennifer Shahade (#siblinggoals). 14 girls from all across the country attended the camp: Carissa Yip, Emily Nguyen, Rochelle Wu, Nastassja Matus, Sophie Morris-Suzuki, Cindy Zhang, Angelica Chin, Kimberly Liu, Ahn Nguyen, Minda Chen, Rachel Li, Arya Kumar, Kelsey Liu, and myself. We all stayed in the amazing Chase Plaza Park Hotel, where the St. Louis Chess Club generously hosted us. The hotel was beautiful, and it was very close to the chess club. Although some of us were familiar with each other, most of us had never really met one another- in fact, most of us girls had never even been to an all girls camp before. I quickly realized this would be an unforgettable experience! Day 1 We went across the street to the World Chess Hall of Fame’s ‘life size’ chess board, where two teams played against each other in a 3 2 blitz game. Round one was Rochelle and Sophie vs Emily and Carissa- with Rochelle and Sophie winning after a very theoretical Ruy Lopez. Round two was Nastassja and Rachel vs Emily and Carissa, with Emily and Carissa winning with a very strong Grunfeld (at one point, black was up 4 pawns). Later that day, we worked on evaluating positions and finding the best candidate moves. Any number of candidate moves could be proposed, but only a few moves gained ‘points’- but there was a catch: in order to get credit, the correct variation either refuting or defending a candidate move had to be written down. The test was quite difficult, with a couple positions only having one person find the correct move. Kimberly, my seat neighbor, got the top score and won the competition. The day ended soon after, and we all had time to explore the hotel, which had a giant pool, a connecting movie theater, and a huge gym! (I was most excited about the movie theater.) Day 2 On day 2, we all went back to the Hall of Fame’s giant chess set and played two 3 2 games as teams (7 vs 7). The rules were simple- everyone took turns moving (in order) and the person who played the last move had to press the clock. It quickly became evident that the game would be difficult for both sides- seeing as how not all of us played or knew the same openings or had the same ideas in positions. We played two games- both sides won one. The games were really fun to play, and even more fun to watch! Playing blitz on a giant chess set doesn’t seem hard until you actually try it! https://twitter.com/USChessSchool/status/1021503632154533889 Day 3 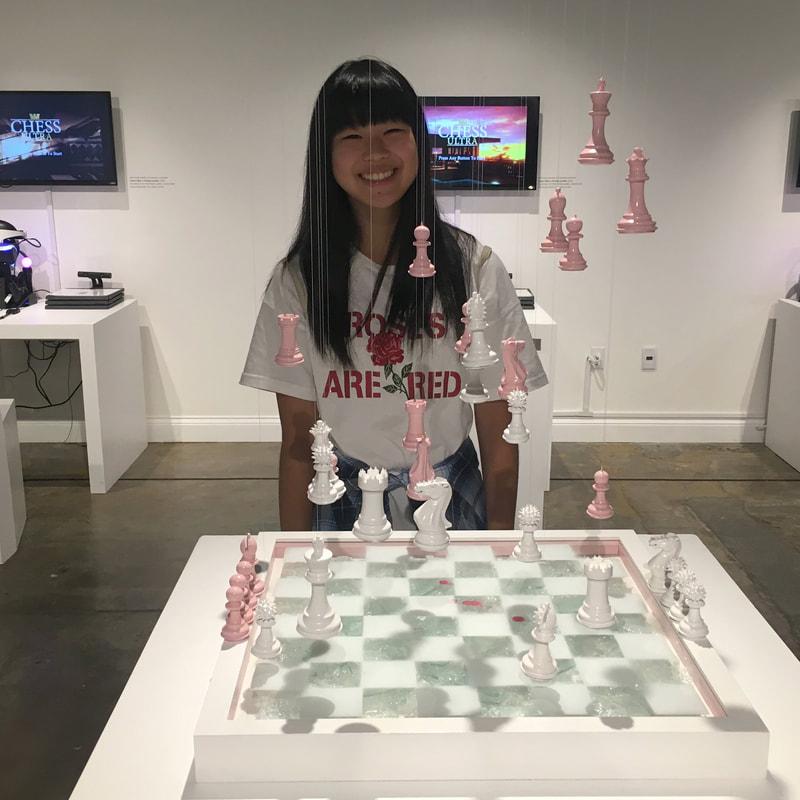 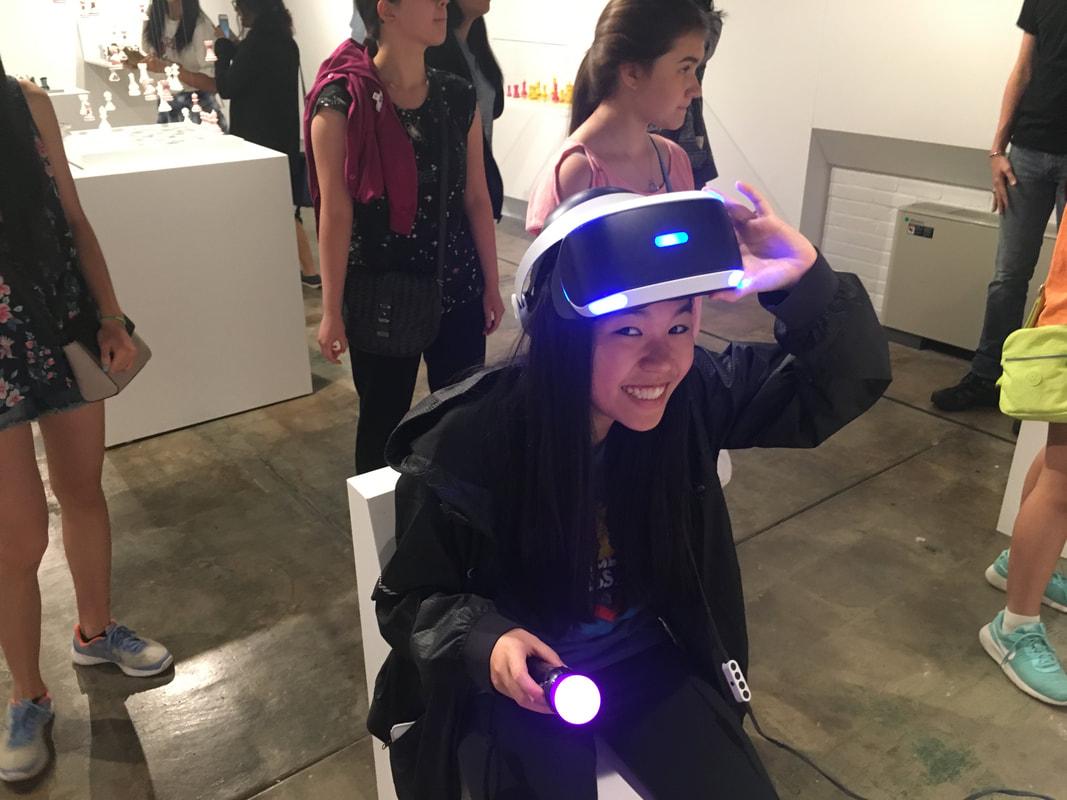 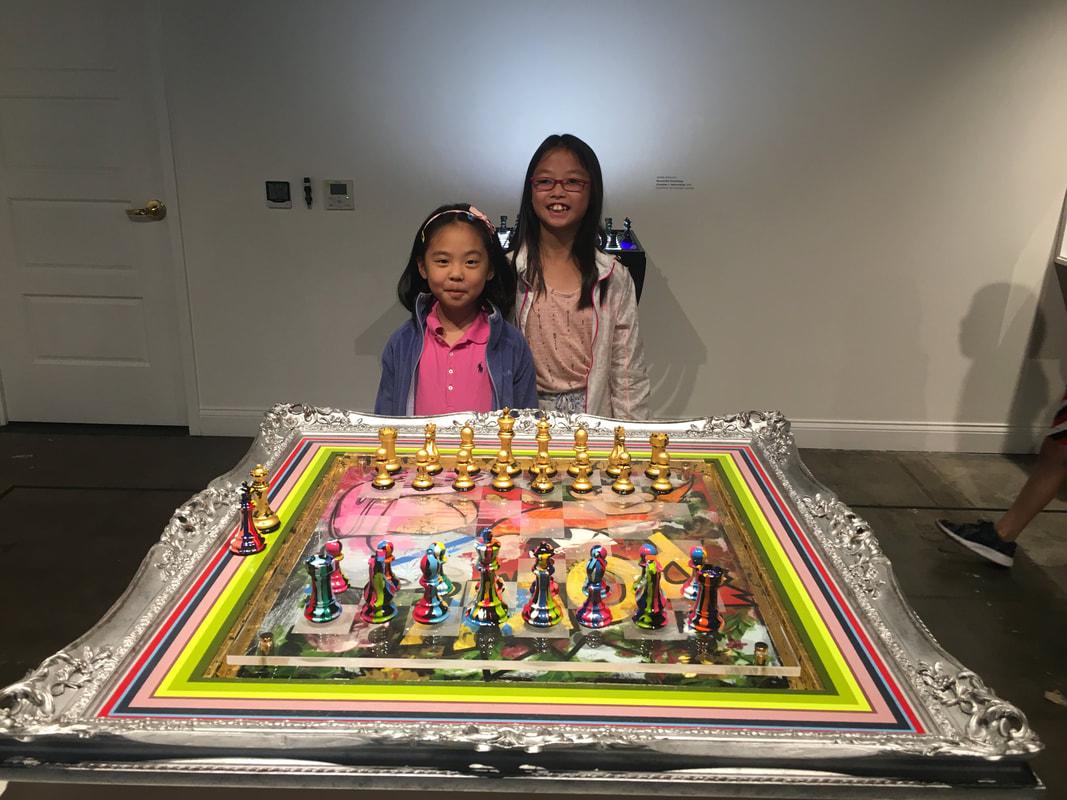 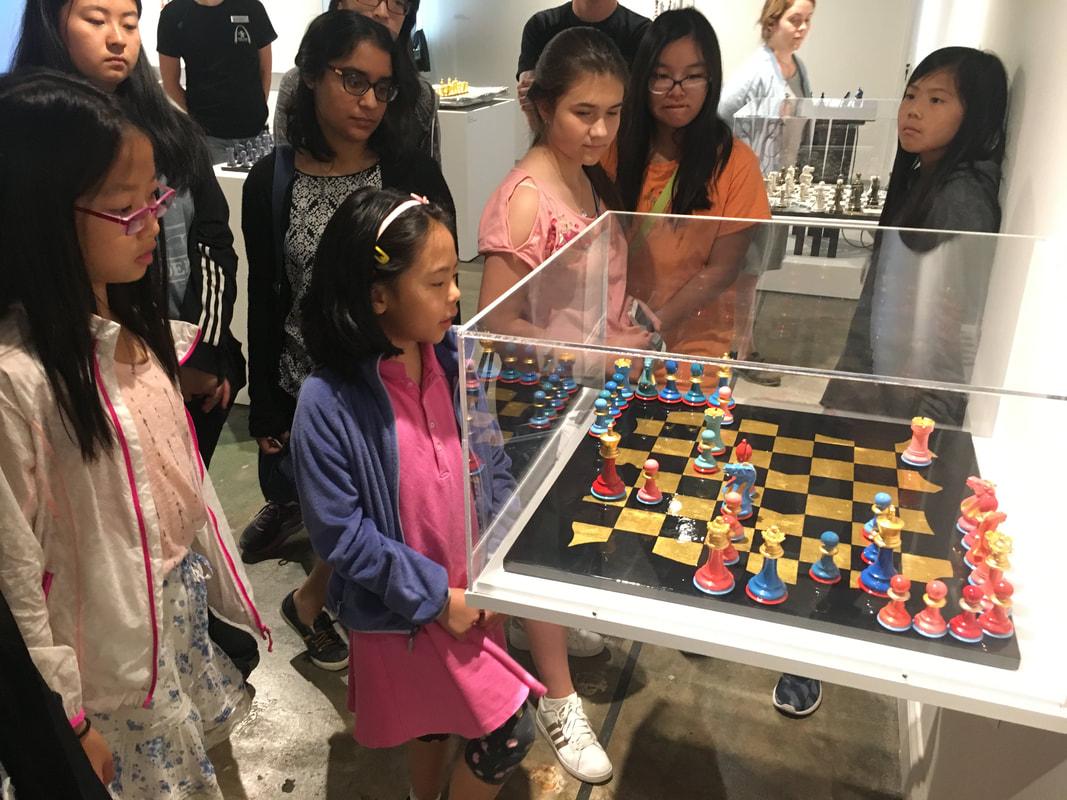 Solving a problem on a set by Sophie Matisse 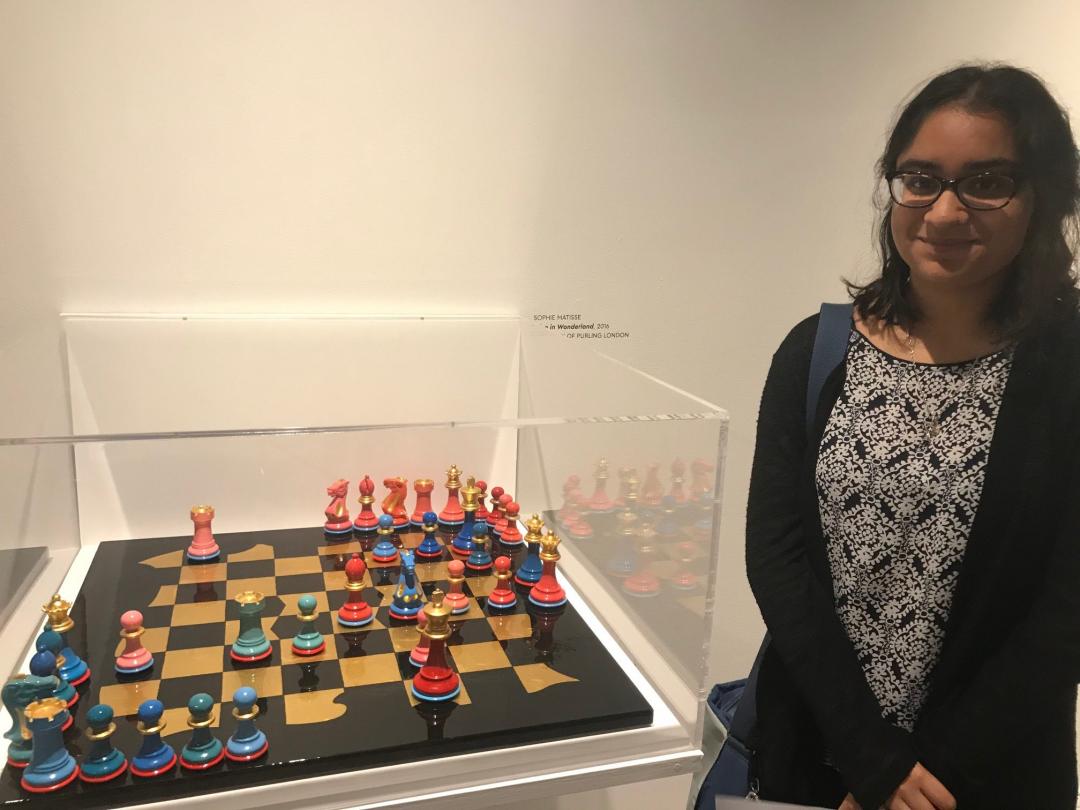 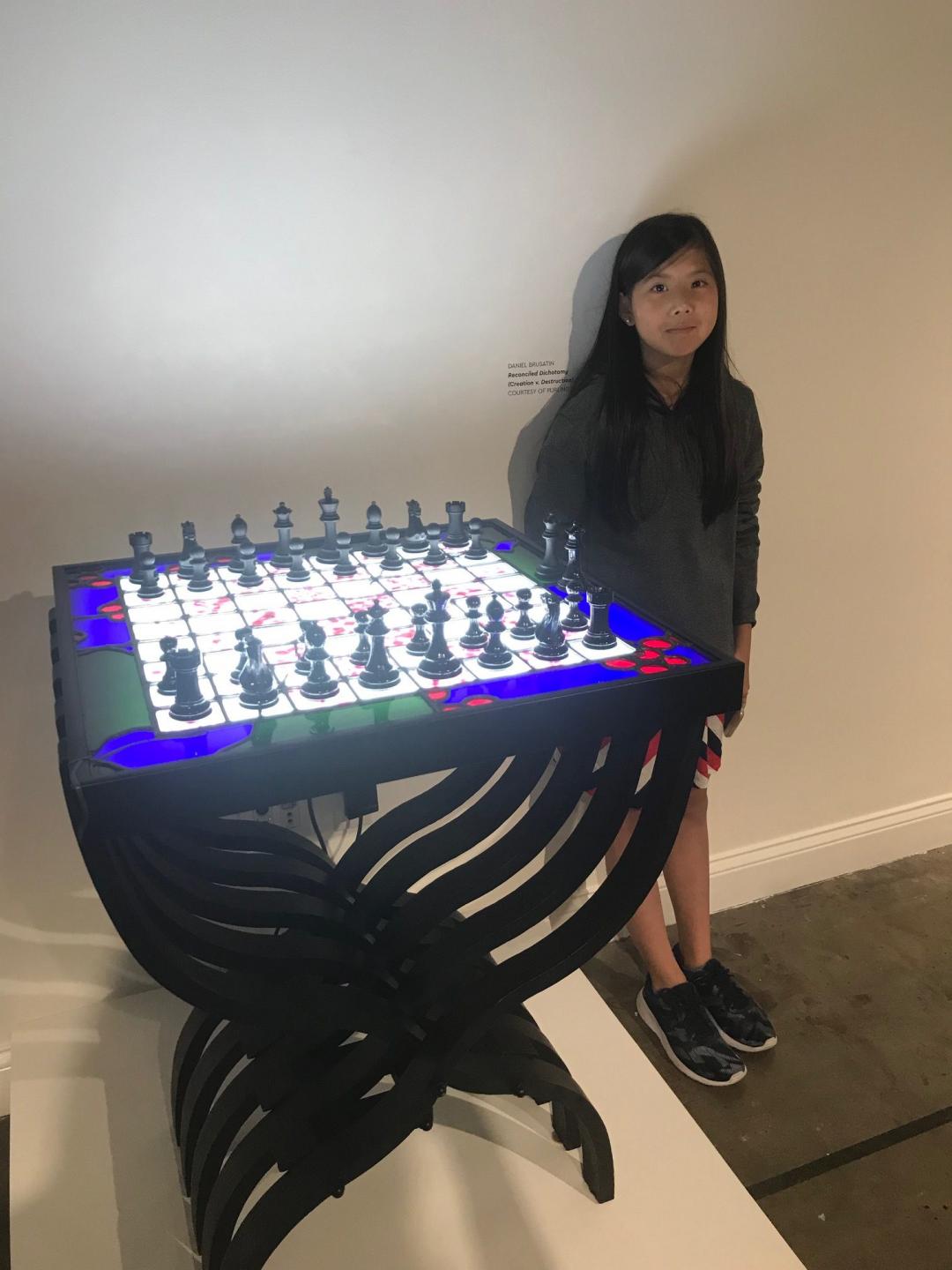 Rochelle Wu by her favorite set

The next day, we visited the World Chess Hall of Fame, which featured the “Painted Pieces” exhibit. “Painted Pieces” was an exhibit of 20 Staunton chess sets, each painted on by a different artist. Some of the artworks featured famous chess games. A group favorite was “Glass Ceiling”- a pink and white chess set by Daniela Raytchev that represented the fight for women’s advancement in chess. Especially fitting was the game that was displayed on the board: Magnus Carlsen vs Judit Polgar (2012), which we had just reviewed. [fen]r2r3k/1p4b1/2bp1n1p/3NpPpq/1QP1Pn2/1P2BP2/P2N4/1K2RBR1 b - - 0 28[/fen] At the beginning position after white’s move f3, we were each asked to evaluate and find a move for black. Can you find the right move? Show Solution

Most of us chose pawn breaks like g4 or b5 or a trade on d5. Surprisingly, the correct move was none of the above- it was Qh4! – a creeping move and also a double attack on the Re1 and the d5 point, because of the pin on the 4th rank. 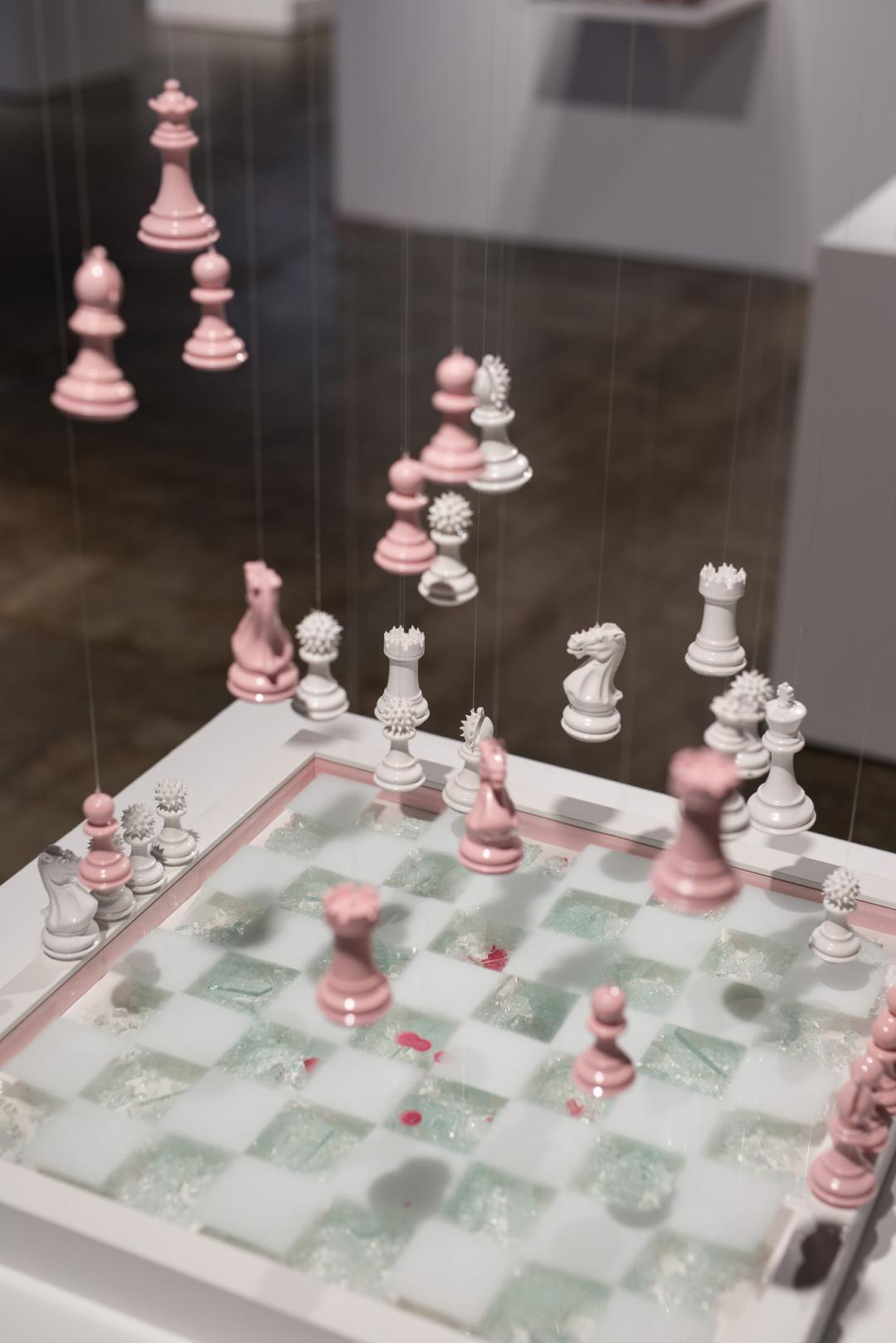 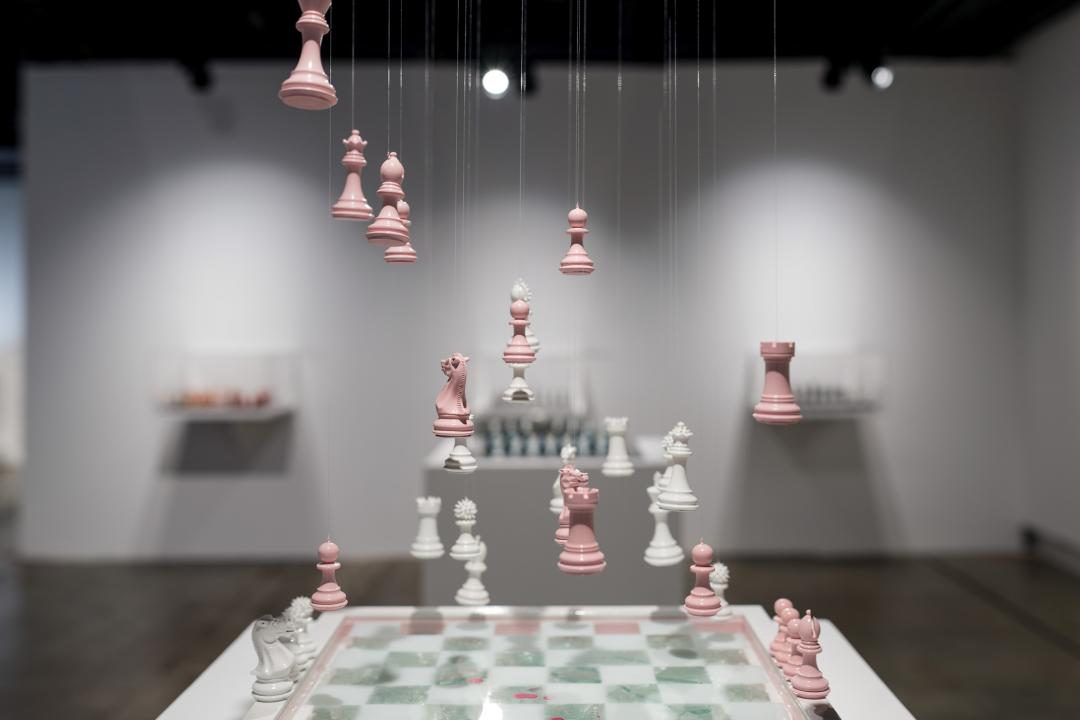 Even World Championship challenger Fabiano Caruana is a fan of this piece. https://www.instagram.com/p/BmHnsemhdml/?taken-by=fabianocaruana The third day of camp was one of the most exciting- knockout bullet tournament day! The pairings were random, and all 14 girls played (with the top two seeds immediately seeded into round two). Confession- I am not good at bullet. At all. I was knocked out in the first round, but I was more than happy to kibitz during the remaining games. "> Carissa won the tournament, with Rochelle coming in second. Jennifer thoughtfully bought prizes from Q Boutique for the top four finishers- of which the most popular prize was chocolate! Here's one fun game, in which Rachael Li did her best Mechanical Turk impression, as explained by Jennifer.  Find all the episodes on Greg's YouTube channel.  Day 4 The last day of camp was definitely one of the most fun- we started off with Jennifer’s powerpoint, which opened a dialogue for us about what being a woman in chess is like. One of the most memorable themes of the activity was the section on Tania Sachdev’s “Powerless Queen” The Powerless Queen is a campaign to raise awareness about the lack of rights many girls in India face- through chess. We played as a team against a computer- but there was a catch we didn't realize at first: we couldn’t move our queen at all- she was completely powerless. (We lost very quickly). After that, we began solving endgame studies; Greg and Jennifer told us that if we were able to solve them all, we would get a prize. There were 20 studies in total, with each study progressing in level of difficulty. Since I’m not very good at endgames, I hung around the ‘easy’ section, though the following position was in the middle of the pack :) [fen]8/p7/rp6/kp6/1p6/1P6/1P2N3/1K3n2 w - - 0 1[/fen] This was one of my favorite puzzles of the entire ‘cooperative competition’- Anh and I solved it together! Show Solution

We spent a lot of time trying to find a checkmate on c6- but once we started considering other possibilities, we found the answer.

It took us a while, but we were able to solve 17/20 puzzles. Greg and Jennifer were nice enough to give us the prize anyway- cupcakes from “The Cup”! They were by far the best cupcakes I ever had, and they really gave new meaning to the term “sweet victory”! After the cupcakes, we headed back to the club and played bullet and bughouse. PSA: I’m the worst bughouse partner ever. At a few minutes til 5, we gathered around the famous USCS projector screen and talked about what we had gathered from the camp. The most recurring conclusion that we individually came to was how comfortable we all felt in the environment; none of us had ever been in an all-girls chess camp of this size before, and we all had loved it. We loved being around other women who shared our passions and our goals, and it was easy to just be girls- not competition. 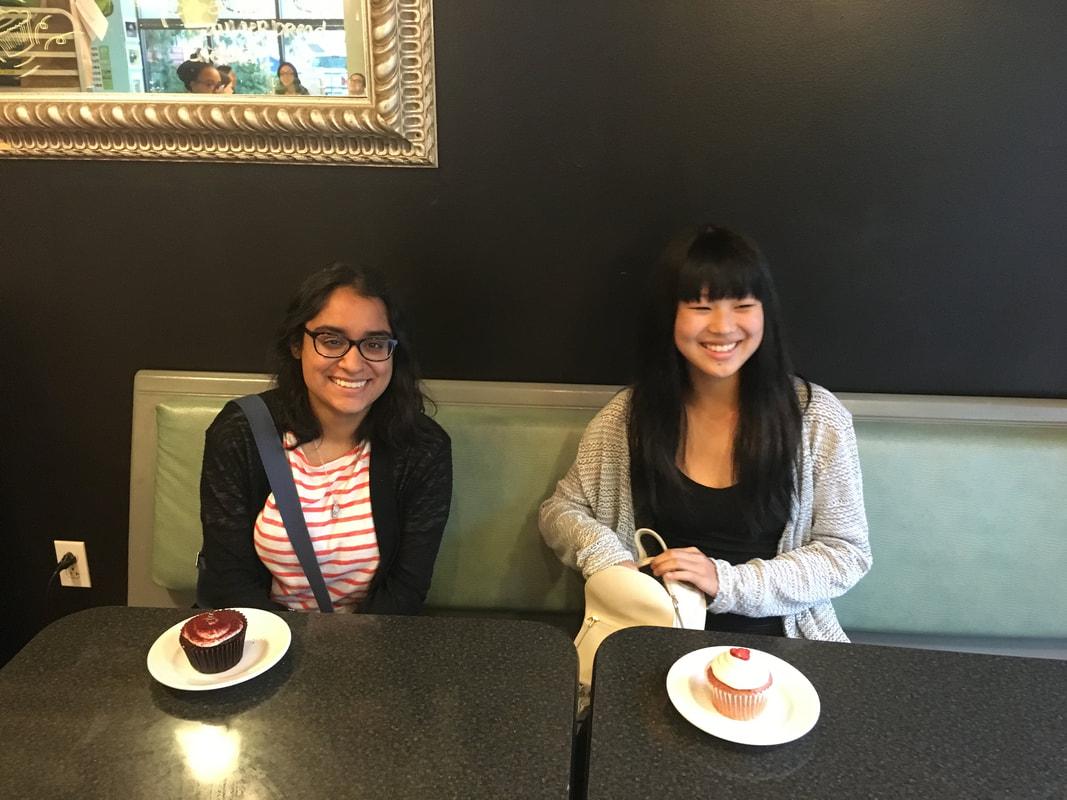 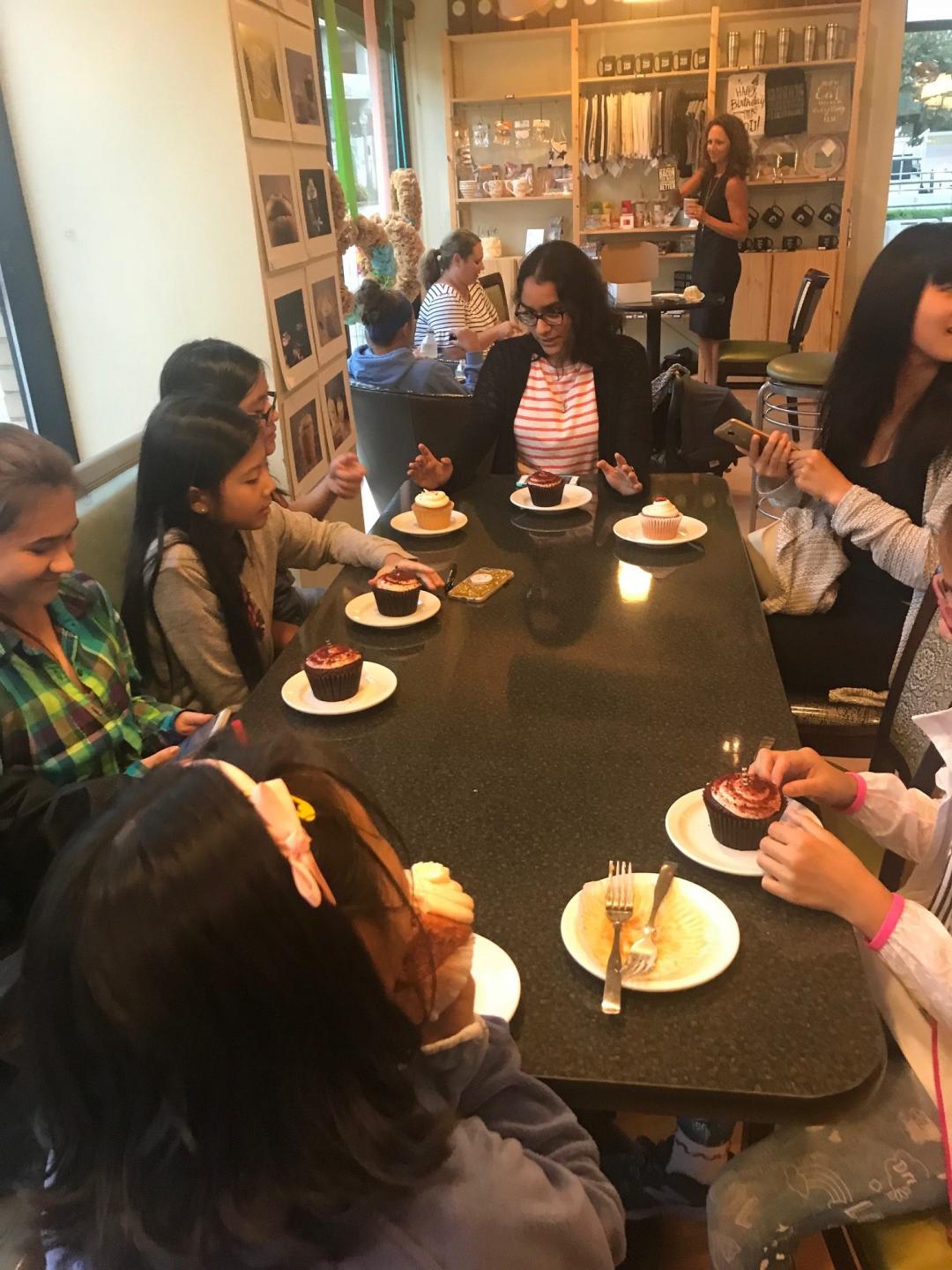 Ultimately, USCS 45 was one of the best experiences of my life. I met so many wonderful girls and learned so much from both Greg and Jennifer- both on and off the board. To be honest, before the camp, I was incredibly nervous. I was terrified I would be leagues behind the other players, and scared I wouldn’t be able to make any friends. The opposite proved true when I arrived at the camp- everyone was so friendly and the chess training was informative and fun. The camp has inspired me to take my chess training more seriously and has given me ideas on how to improve on my own girls chess clinic “Pawns and Queens” back in Brownsville. One of the most important parts of chess is not the game itself- it’s the relationships you form through the game. USCS allowed me to form many friendships with amazing girls who I know I’ll never forget- and for that, I’m grateful. Hope to see you next summer, St. Louis! 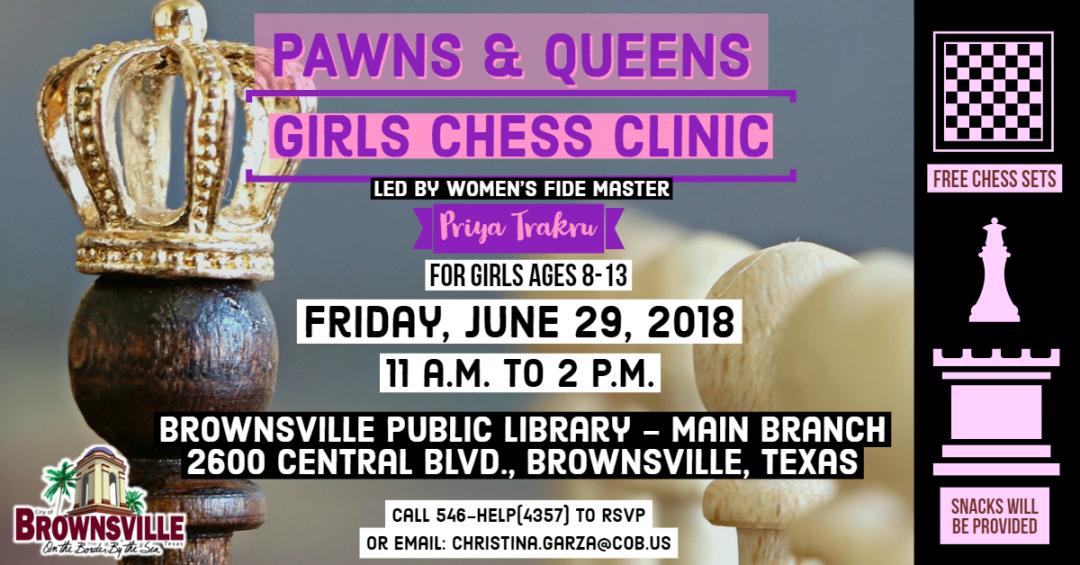 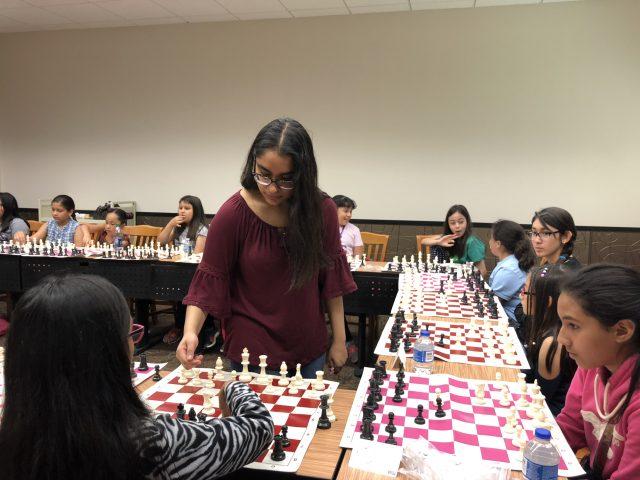