A handful of last-round players are hunched over lower boards in the huge ballroom, like lonely hangers-on after a celebrity wedding reception. But across the room, pressing against the stanchions that shelter the place of honor, Board 1 of Table 1, spectators still cluster, watching the matchup that will determine who’s the bride and who’s a bridesmaid—metaphorically speaking, that is. Princeton Orange (with an average rating of 2191), the only team with a perfect score of 5-0 going into the sixth and final round, was paired with Connecticut’s Finest (2197), one of five teams with 4 1/2. In the first game of the matchup to finish, Connecticut’s William Torres got the better of Princeton’s Daniel Moreno on Board 4, putting Princeton in the hole. To win, the squad now had to score at least 2 1/2 out of the three games still in play. But then Princeton’s FM Ethan Li drew NM Ian Harris on Board 2, while on Board 3, Princeton Expert Zachary Holecek beat Connecticut Expert Joseph Bihlmeyer. So, it was all in the hands, and brains, of the two teams’ top players, FM Kapil Chandran for Princeton Orange and NM Arslan Otchiyev for Connecticut’s Finest. Any result on Table 1 other than a “Princeton Orange” win would throw the title up for grabs in a tiebreak calculation. With three of the four-player teams already turning in scores of 5 1/2, there was a lot of anxious self-interest. And the board position was rife with missteps for both. 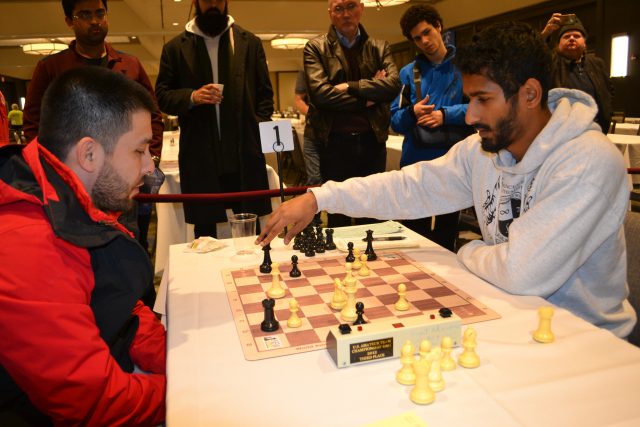 Chandran-Otchiyev postmortem (photo Al Lawrence)
After 66 moves and the resolution of all the other games, the four Princeton students had won the  49th annual iteration of the U.S. Amateur Team East Championship with a perfect 6-0 score. Connecticut’s Finest, after a great run, had to settle for Top Connecticut team (justifying their choice of name). 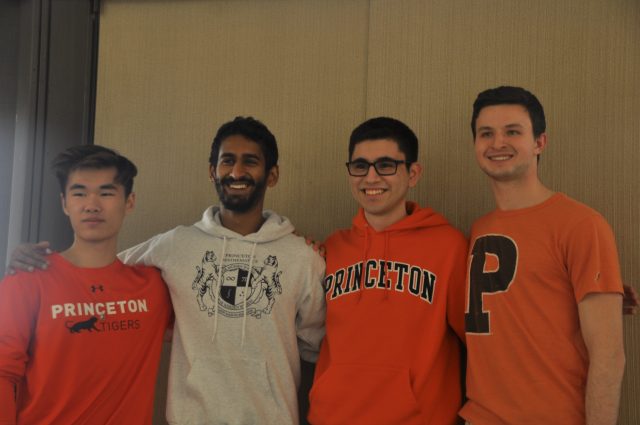 L to R: Ethan Li, Kapil Chandran, Daniel Moreno, Zachary Holecek. (photo Diane Somers)
“USATE was a very difficult event that we were able to win because of our team's great resilience and a pinch of luck,” Chandran said. “In several rounds of the tournament we went down 0-1 early in a match. Each time, we had to fight hard to hang in there, resurface, and eventually swing the match around.” The four weren’t the only Princeton students to do well.  “Overall, the 12 Princeton players were very happy to participate in USATE 2019, and of course we were thrilled to take home the 1st and 3rd places.” Here’s how the top teams finished: The World Team (aka USATE) is definitely a pro-am event, with dozens of teams led by titled players, requiring lower-rated players on the other boards. The game before the first round ever starts is math, as captains angle to recruit to the rating limit. This year eight teams came in with average ratings over 2190, and one, Avengers: Initiative Wars, from Massachusetts, bumped the ceiling at 2199. But they derailed in the very first round, losing to Chairmen of the Board from New York. Mysterious rook move Avengers won in Round 2, when they faced Can’t Shut Down This Fed (one of my favorite team names this year), led by popular GM John Fedorowicz. But the Hall of Famer scored a crisp win with an old tip from former world champ Tigran Petrosian! Huuuge crowd, largest ever, period! The annual World Amateur Team is the original and by far the largest of the regional Amateur Teams. In fact, it is about the size of the Chess Olympiads, even counting both men’s and women’s teams in that biennial event. This year, the USATE drew 1352 players to form 323 teams (teams are permitted alternates). Teams are limited to an average rating of their top four players but can stack their lineups in any way that brings about a rating under 2200, except that there’s a rule against more than two GMs on a squad, and boards must be in strict rating order—unlike in the PanAms, where teams can swap boards within a 50-point range. Because of its heritage and attendance, the tournament also received official designation as the World Amateur Team Championship. Those who win the event receive the Denis Barry Award, named after the event’s long-time organizer and past president of US Chess. The popular event draws faithful returnees and new players alike, who come for the fun of fighting for a team. No cash prizes are awarded, but there are lots of clocks and plaques for division winners. Under 2100: Masters of the Exchange Under 2000: We Won't Come Short of Winning Under 1900: Li Kingsmen Under 1800: Draw Blood Not Chess Under 1700: Magbutt Fartlessons Under 1600: Cornell B Under 1500: Team Salami Under 1400: AcademyTY Under 1300: Team Innovation Center Under 1200: Can You Don't Under 1000: Hopkins School Grey Two Teams tied for Top Scholastic Team, the Collins Award, named after Bobby Fischer’s famous chess teacher John Collins: Stonewall Defense Shutdown and ZZZ … Quiet Moves. Top Seniors (over 50) was won by Senior Blues No Way. Best Family (four family members) was Chess Fun Way. There are lots of other prizes at the “The Team.” You can see them all, as well as complete results online at https://njscf.org/2019usate. Names and Gimmicks Part of the fun Organizer and former US Chess president E. Steven Doyle always folds into the event is a Sunday afternoon polling on the Best Team Name and Best Gimmick. Doyle proves he could easily emcee a TV gameshow, as he elicits laughter and a vote by applause in the packed hall. The Best Gimmick can be costumes, songs, poems, stand-up—or any combination.= This year Magnus Smoked Caruana was best name, if not entirely accurate history. Runner up was Brett Kavanaugh Touched My Queen. I noticed some other contenders reflecting contemporary topics: Black Pawnther, Can’t Shut Down this Fed (GM Fedorowicz’ squad), Fake Moves, If We Don’t Win It’s Rigged, and, very on-point, given the fact that E. Steven Doyle retired from his position as senior vice president of Aetna and is now the newly elected mayor of his home town—Rules According to Doyle. (For those under 40, a reference to the most famous game rule-compiler of all time, Hoyle.) Prawn Sacrifice won a very competitive vote for Best Gimmick. 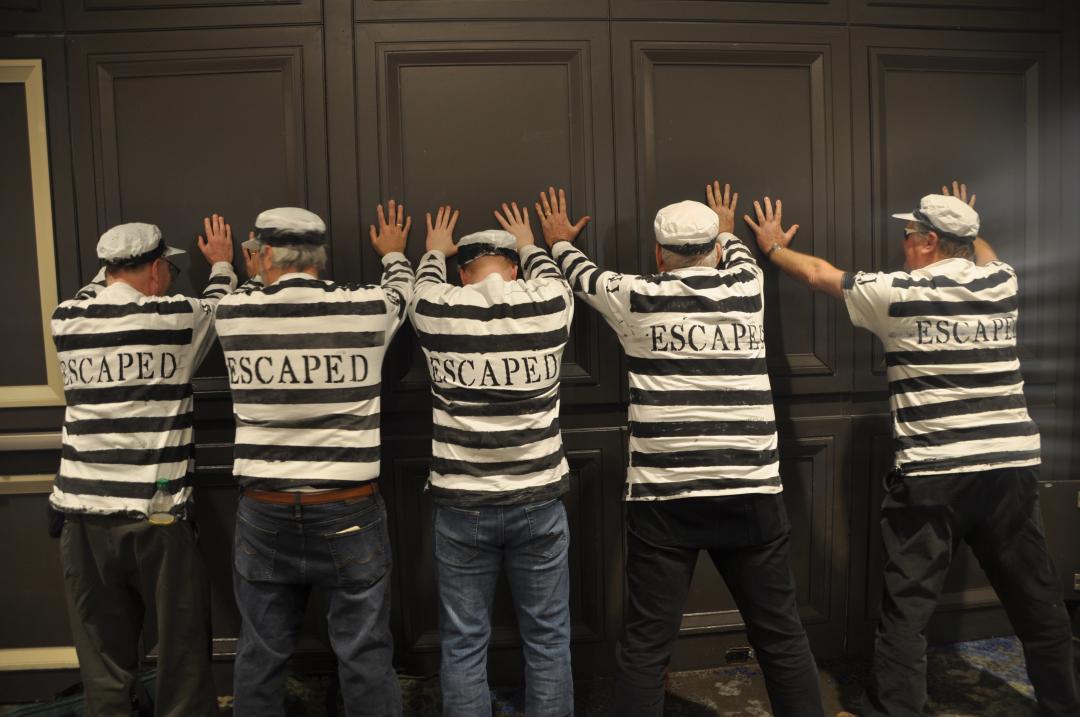 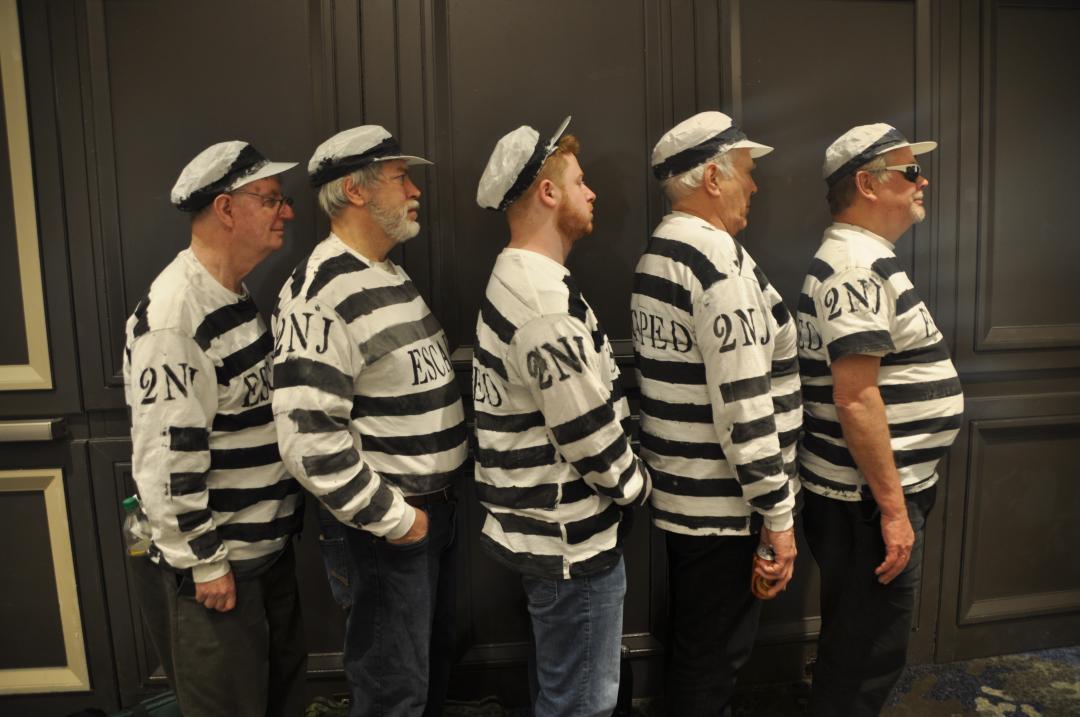 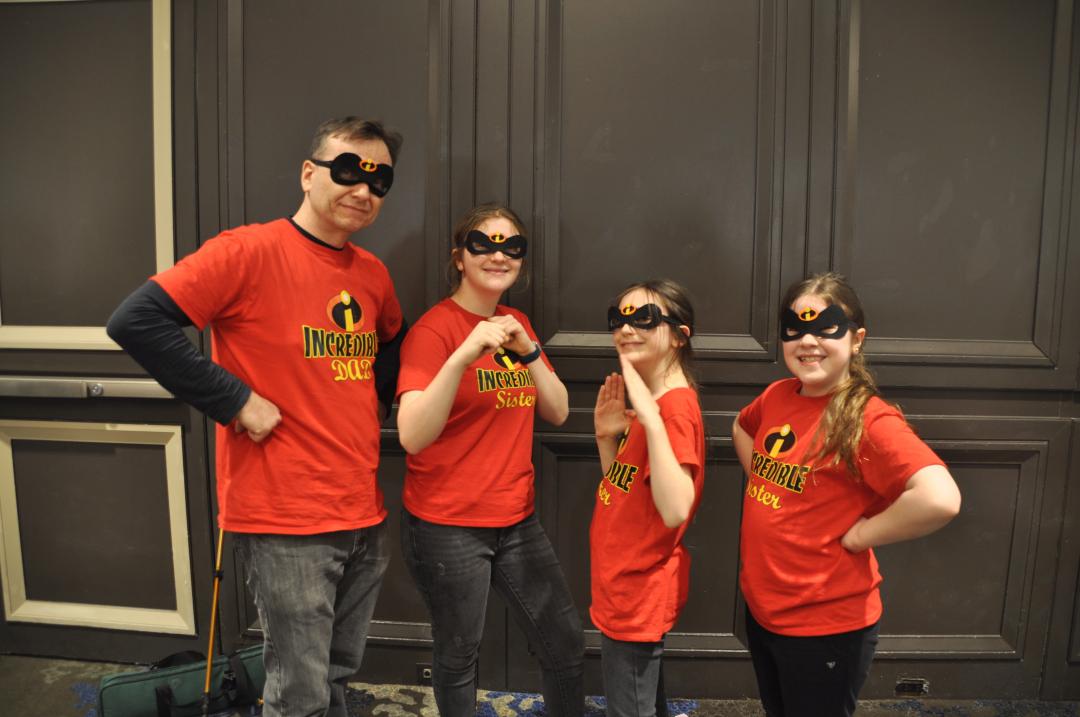 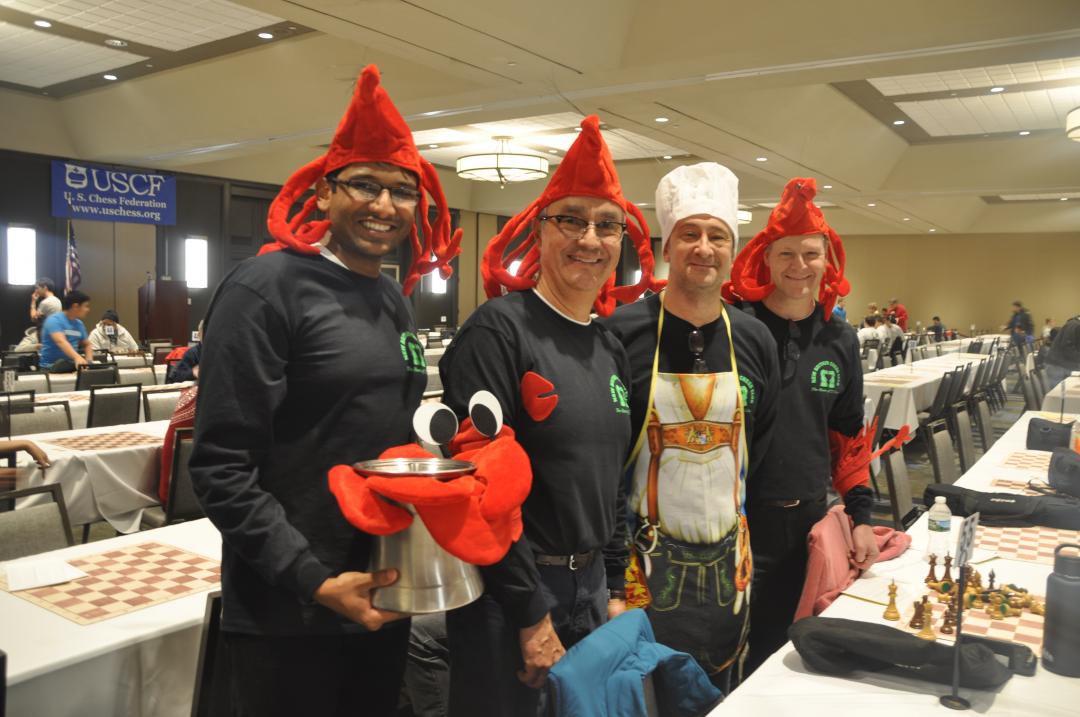