Our Man in Madrid

Editor’s note: When Abhinav Suresh reached out to me in June before his trip to Madrid for the Candidates, I was more than happy to connect him to match organizers and have him on-site on behalf of US Chess. I know what a thoughtful and intelligent writer Suresh can be, and I also know his deep love for, and growing strength, in our beloved game.

Over the span of more than a week, “our man in Madrid” witnessed some dramatic chess, talked to players, reporters, and fans, and fed information back to us here in the States for our coverage. He also wrote this wrap-up of his time in Madrid. Consider it your weekend read, and your inspiration to get out and see the world.

For more on what happened at the next stop in Suresh’s European adventure, check out his “My Best Move” contribution to our September issue of Chess Life.

Earlier this month, I left my job in the New York financial world to pursue a new opportunity. While I was apprehensive about moving on, the prospect of a new challenge — a new start, a “day one” — was too much to turn down. 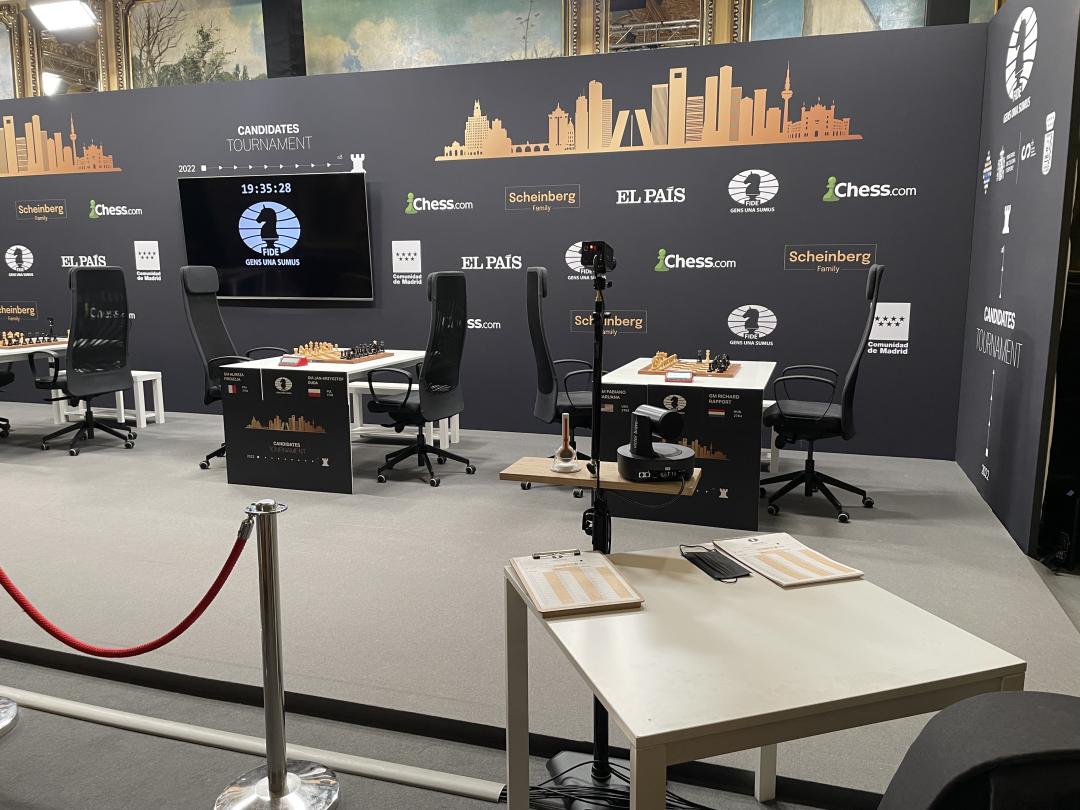 Image Caption
The playing hall at the 2022 Candidates Tournament

Arriving in Madrid, where I was visiting before beginning my new job, “day one” was really “day three.” After a delayed plane and a mishap with a SIM card, I picked up my credentials at the Palacio de Santona. As it happened, I only managed to catch the tail-end of the most exciting game of the day, Firouzja versus Nakamura.

It didn’t matter that I had come in late. The energy, despite the hour, was palpable. I checked out the main Spanish commentary booth, coordinated by GMs Jose Rafael Gascón Del Nogal and Miguel Santos. The antechamber was filled with press and spectators, eagerly analyzing the earlier games of the round and energetically kibitzing despite having done so all day. On the other half of the room, Chessable and Chess.com representatives were joining in on the fun, calling out moves and engaging in blitz games whenever their honor was challenged.

Suddenly it hit me. This is what I missed. Not just the games, but the fun. Chess, for me, had always been a brutal sport. The last time that I focused on the game, improvement had been my primary concern. I was afraid that upon my more serious re-entry, despite (or perhaps because) my conscious de-emphasis of rating advancement, it would lose the initial luster that the game once had.

Here, the atmosphere was intense. You could see it on the candidates’ faces, on the livestream and even more so in person — but all around, it was also filled with levity and enjoyment. I had expected a more somber event, filled with stony-faced organizers, frantic media, and serious enthusiasts. How wrong I was!

Over the next few days, I was shocked at how much the atmosphere would vary, almost by the hour. After round five, when Hikaru drew the tournament leader Nepomniachtchi, I saw the players leave in disgust before I could fumble to take their pictures. That same day, I spent a few minutes chatting with a visibly exhausted Richard Rapport, who quipped “These kinds of games aren’t good for my health.” And the day before, a disappointed Ding Liren replied “No, not a good game,” after I congratulated him on his spirited effort against the leading American, Fabiano Caruana. 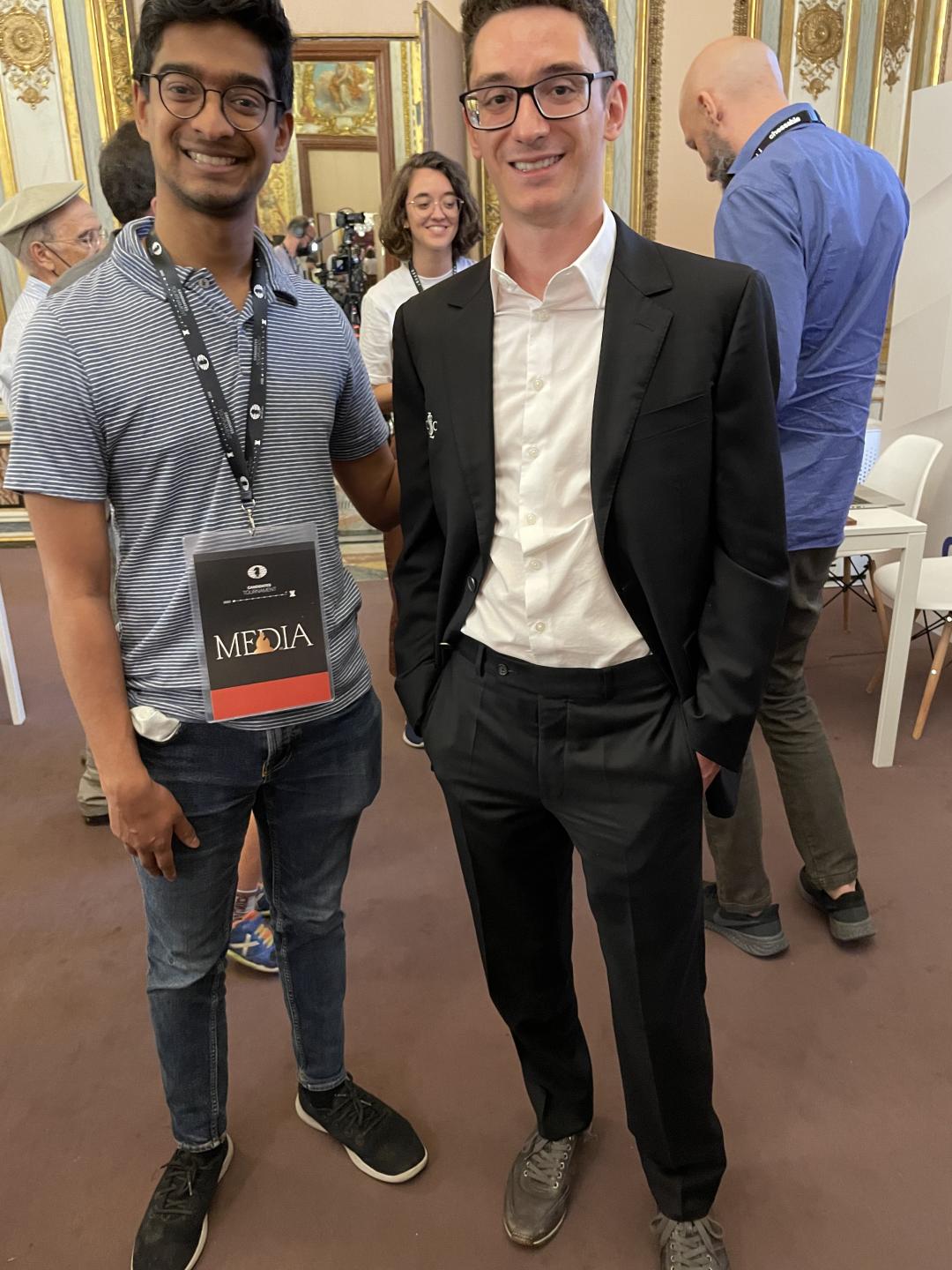 Image Caption
The author with Fabiano Caruana at the 2022 Candidates Tournament.

As a former competitor, I understand. These players are at the very top of their fields, and they expect (to some extent) nothing less than perfection. That, in essence, is the standard required to win the Candidates, not to mention a potential (if not, in the end, actual) world championship match against the indomitable Magnus Carlsen.

Perhaps what surprised me most was the sheer kindness I experienced. Both Caruana and Nakamura exchanging a few pleasantries with me after some of their “lighter” games showed me that behind their exploits over the board are two entirely normal people, willingly staying for pictures and autographs for fans. 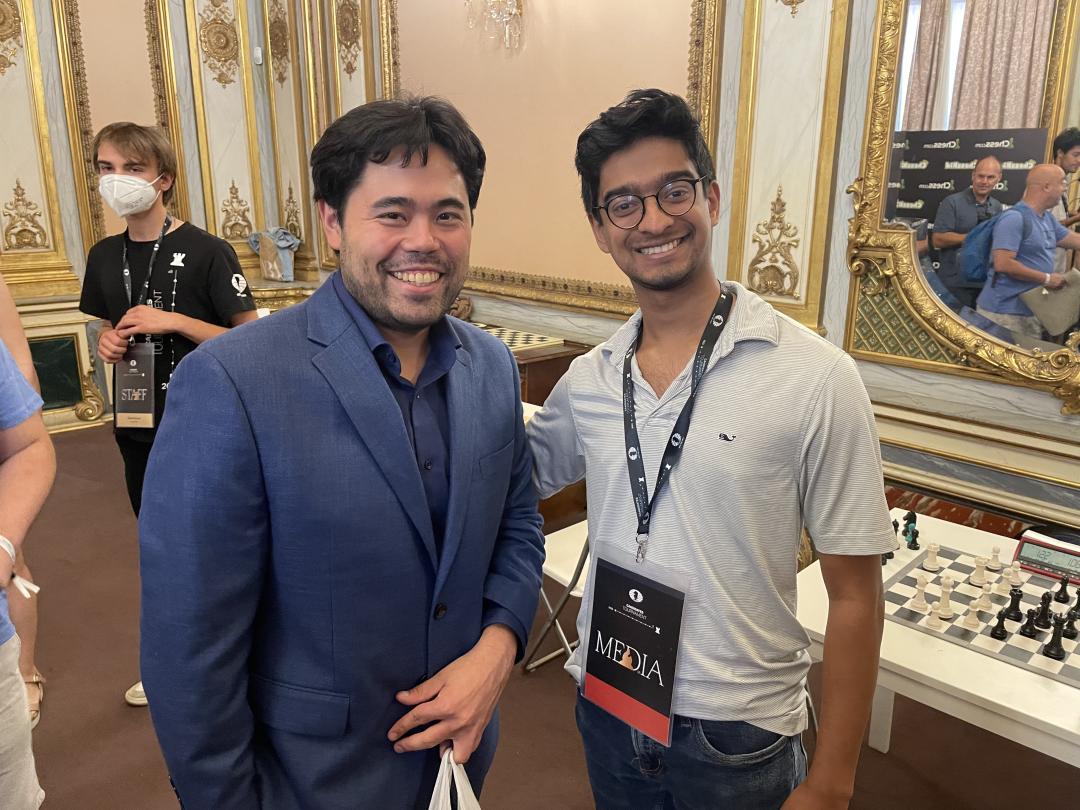 Image Caption
Hikaru Nakamura and the author at the 2022 Candidates Tournament.

And it wasn’t just the Americans who were engaging. Ding was a consummate gentleman, saying few words, but almost always with a smile on his face. Firouzja, a fan favorite, seemed to be highly reserved, spending the vast majority of his time with his brother and father, but still happy to take a couple photos. Nepomniachtchi appeared to barely believe his luck after his round seven win over Rapport, breaking out the largest smile I’ve ever seen from him, in-person or online. Jan-Krzysztof Duda was quiet, but self-assured in his skill, he travelled with a cool confidence regardless of results. Teimour Radjabov impressed with his wittiness in his interviews with Dina Belenkaya. Despite his poor performance, he seemed to gain the most favor with the crowd by the mid-way point of the tournament. 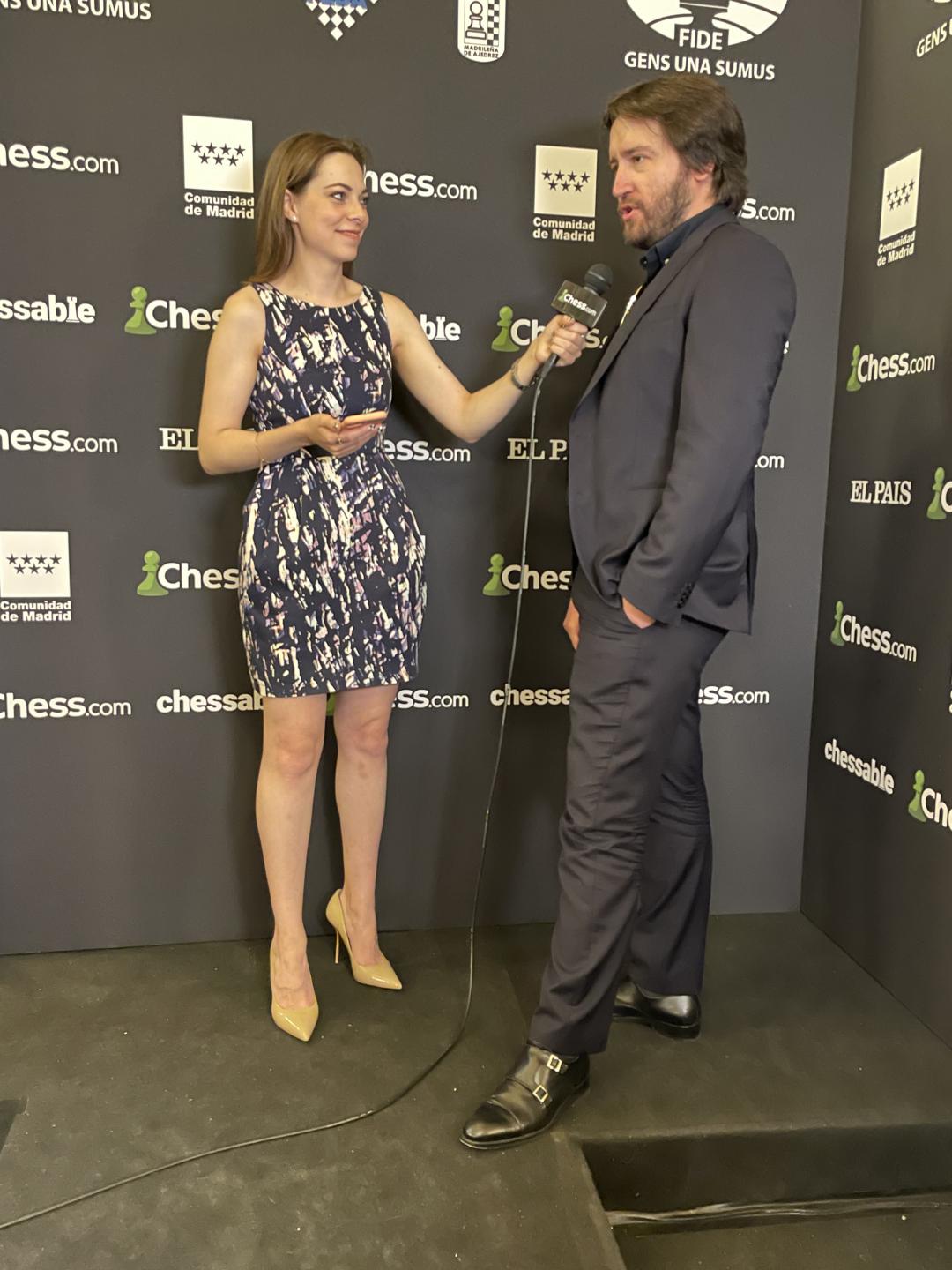 The other characters surrounding the tournament — the talented crew members of the press — were nothing but friendly to this outsider. As the tournament dragged on, I saw no wavering in their dedication to pursuing excellence in reporting, documenting, and glamorizing chess for a diverse, global audience

The tension ratcheted up in rounds eight and nine, with a dramatic win by Nakamura over Caruana among the key results. Desperate for a win against the tournament leader Nepomniachtchi, Caruana went for an aggressive sideline in the Petroff the next day. The tension was palpable – every media member speculated endlessly on the repercussions of the round and games, and how a win by Fabiano would set the pace for a thrilling nailbiter in the final rounds.

After Caruana collapsed in the later rounds, and Nepomniachtchi  continued to grow his lead, the mood changed again. Earlier in the event, the players seemed to beat themselves up for every minor inaccuracy. Even Nakamura, after thrashing Caruana in round eight, berated himself for making his task harder despite the result. Players often skipped the press conference in the games that they lost, visibly disgusted with their own play.

But after it became clear that Nepomniachtchi would be the challenger, every player seemed to loosen up a little — except for the Russian. Though he clinched tournament victory with a round to spare, I was decidedly impressed when he was asked how he felt – “There is still one more game to go,” he said, “and I don’t want to spoil my own party.” 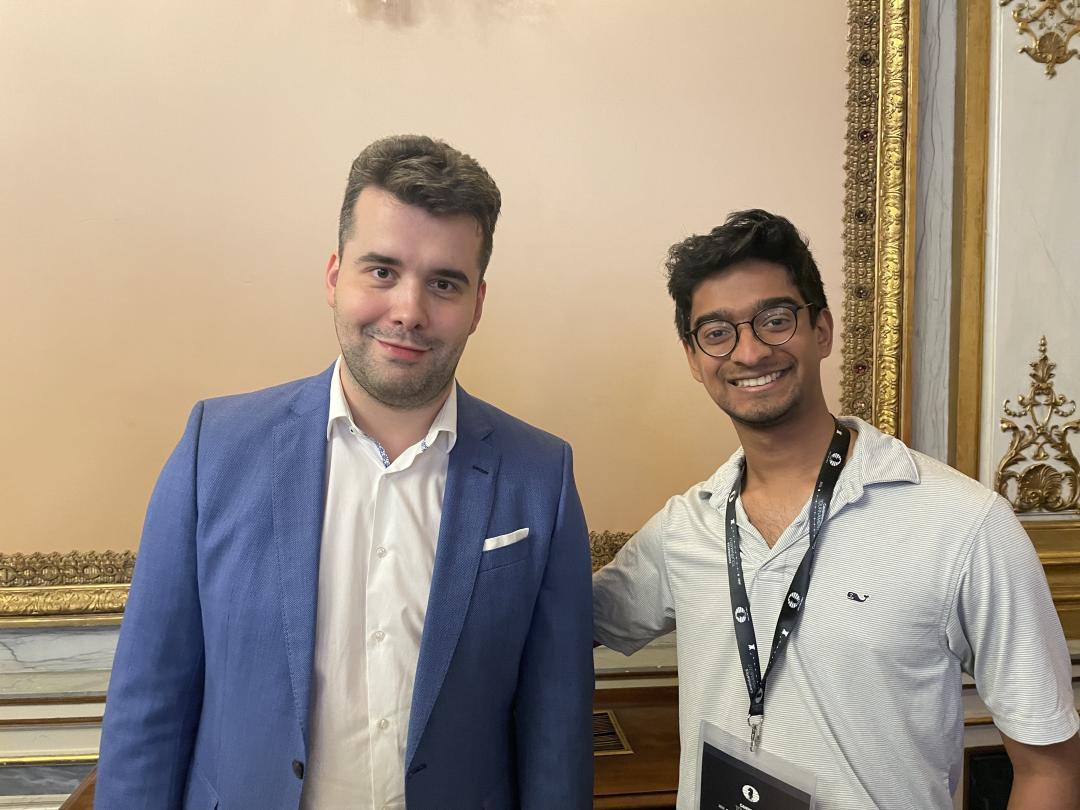 Image Caption
The author with GM Ian Nepomniachtchi at the 2022 Candidates Tournament.

I couldn’t help but be awed by these words, and there is nothing more befitting the phrase “champion mindset” than the attitude I evinced in that interview.  Though I had often went down to the skittles area in the venue for a few games against other players, I didn’t really feel the need to improve my own game until I witnessed that moment.

I played a series of G/3+2 games against a couple of strong journalists. While I was evenly matched in terms of rating with many of them, I was shocked — and frustrated! — by my woeful play. I went a dismal 2/8 against a player who I could feel was not any stronger than myself. A half-decade of tournament inactivity and a years-long bullet-chess addiction had rotted my calculation ability. I’m reminded of a phrase that poker players use to disparage online play — they call it “button-clicking.” And indeed, that is all I had invested into my chess education during my second half of college and entirety of my first job.

No longer. I now have more time to dedicate to chess; what could I possibly be waiting for? The Candidates was supposed to be a mere vacation for me, something for me to do around so I could feel involved in chess, even if I weren’t working on my own game. I can’t justify that now. That craving to win and improve is back, and I missed its sometimes-bitter feeling. 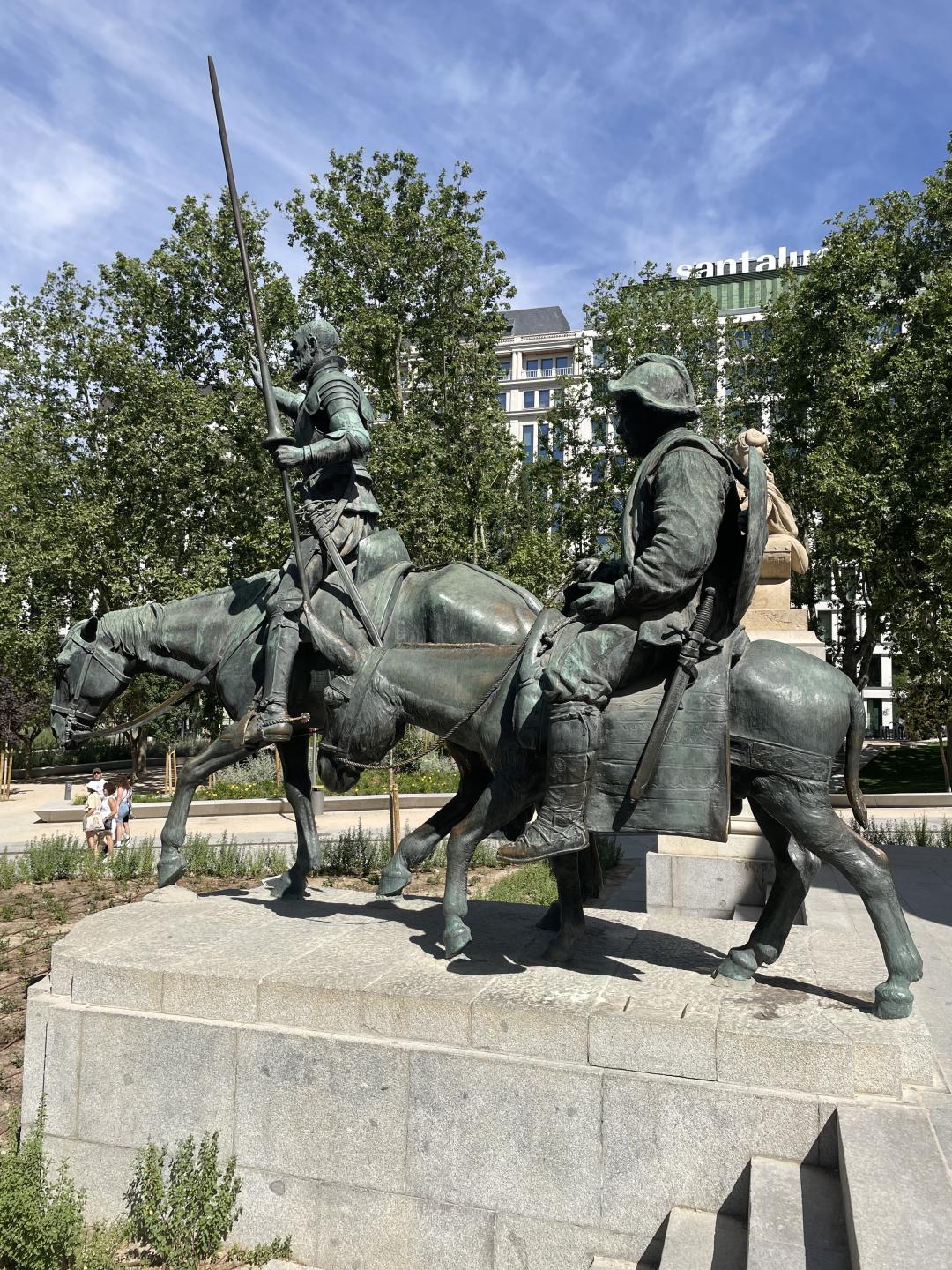 I came to realize that I had been using the scourge of online chess to prevent me from really working on my own game. Only by turning the online off – by staying, watching the commentators, and analyzing lines with other strong players – was I able to improve my overall understanding. Indeed, even by the end of the tournament, I could feel my calculation ability slowly return, my understanding of motifs beginning to crackle in my fingers once more. 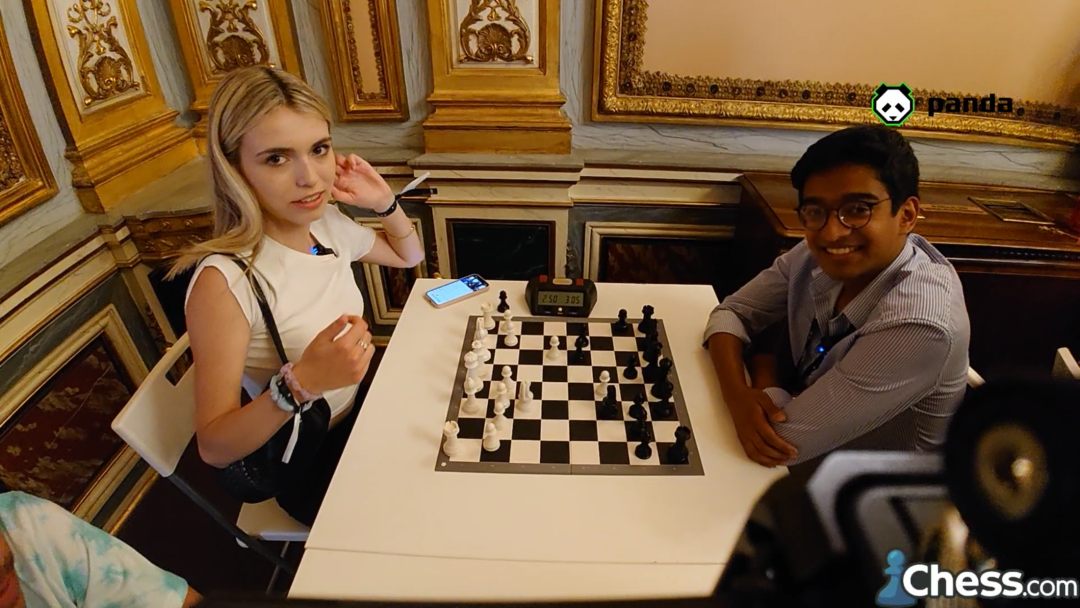 Of course, I had fun. And that was the main reason that I had come in the first place. I met the incredibly popular streamer Anna Cramling, playing her in a pair of blitz games (both losses – both from better positions!) as we discussed how to improve. Rey Enigma – the masked chess player from Madrid – made an appearance on the last day of the Candidates, and he was all too happy to take down my regular sparring partner in a beautiful game.

Magnus Carlsen himself made a surprise appearance during the penultimate round, giving me sour face when I asked him for a picture for US Chess. In comparison to the camaraderie I had grown used to, this entire experience was almost comical – from his contorted sneer to my immediate, unbidden laughter, so incredulous was I at his aloof behavior.

But no matter. I had met every single player at the tournament multiple times, and each one (save the champ) was kind and gracious. GM Nikita Vitiugov, making a surprise appearance to support Nepomniachtchi, was one of the friendliest players I had ever met, replying “one day!” when I told him I would love to see him in the Candidates in the future.

I’m bringing a lot back from Madrid. There are photos, contacts, memories. But most of all, I am eager to get behind the board — and the books! — in order to improve my own game. I have been chasing the title of “expert” for far too long. While it might not come easily, or (alas) even quickly, I suspect that I’ll have my time at the Candidates to thank one day when it does.

Thank-you for a fine article…

Thank-you for a fine article. Every word, every train of thought put in to the activity, overflowed with the reality of both playing in a tournament, and watching from the sidelines. I really enjoyed this one and look forward to an appreciated look at more to come from the author Abhinav Suresh.

Wow that is so cool. Hanging out with GMs in my hometown of Madrid. What an incredible experience!