One Move at a Time August Edition: Mike Nolan

Welcome to the August 2021 edition of “One Move at a Time,” the US Chess podcast in which Dan Lucas, the Senior Director of Strategic Communication, talks to people who are advancing the US Chess mission statement to “Empower people, enrich lives, and enhance communities through chess.” 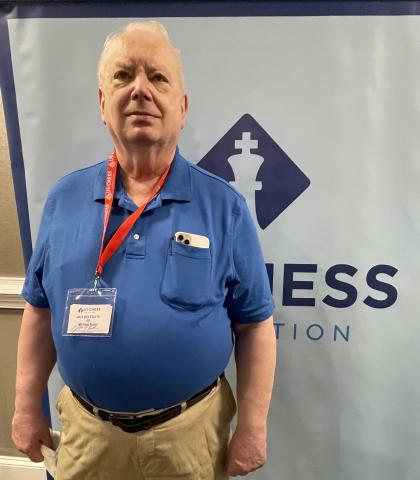 Our guest today is Mike Nolan, a longtime employee, consultant, and volunteer for US Chess.  We recorded live at the 2021 U.S. Open in Cherry Hill, New Jersey on August 5. Mike was here because after serving as Parliamentarian for the Delegates Meetings from 1990 through 2016, he was tapped to serve again this year after the recent death of Ken Ballou.

Mike graduated from Northwestern in 1972 and received an MBA from the University of Nebraska in 1980. He has served as chair of the Scholastics, Bylaws, and Finance Committees. Many people now directly associate Mike with our IT systems; he first started talking to US Chess about IT issues in 1986, started working with us on database issues in 1998, became a paid consultant in 2004, and became an employee in 2013, finally retiring in 2016 but still advising us on IT issues as a consultant. He is the recipient of the Special Services Award and Distinguished Service Awards from US Chess. At home in Nebraska, he served as the Nebraska state president and editor of their magazine for several years.