Olympiad Round 9: No Greek Tragedy

After the struggles in the two previous rounds in the Open event, it was essential that the American team post a victory — preferably a convincing one! — against an overperforming Greek team that was rated on average 200 points less than the America team. And team USA delivered. 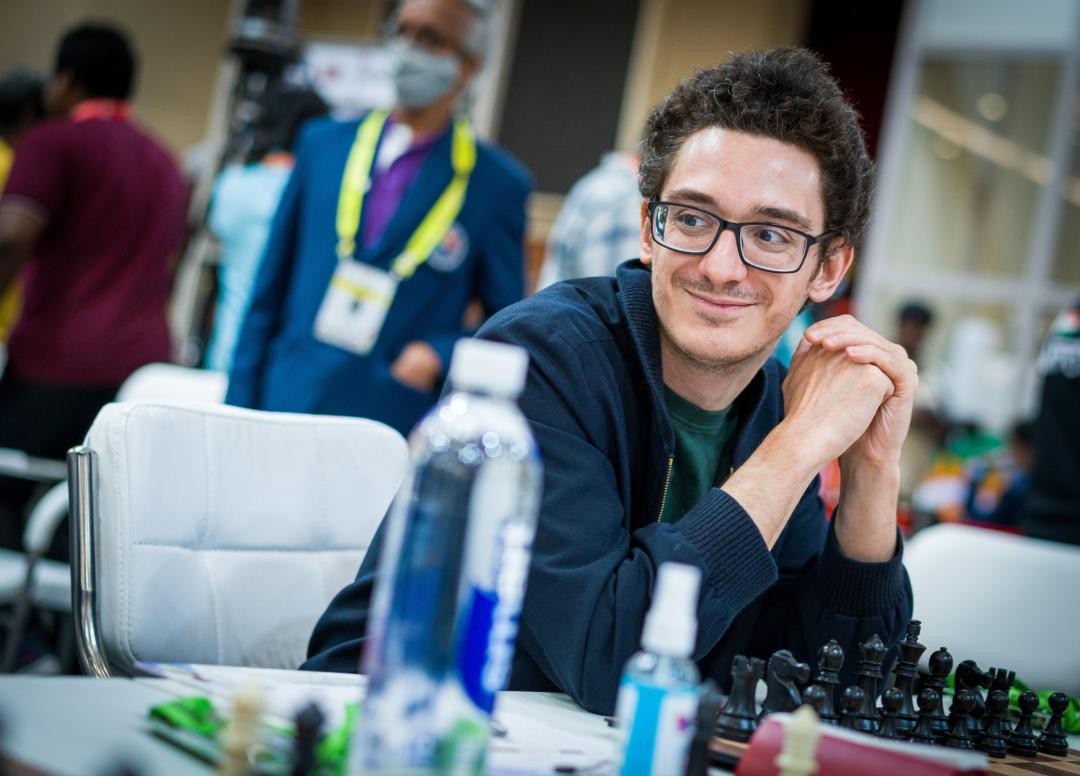 On board one, GM Fabiano Caruana needed to restore his self-confidence and for that purpose chose the Sveshnikov Sicilian. White seemed to have a good position but then went wrong several times in a row, starting at move 20, when his position went from good to even to clearly worse to lost in a matter of a few moves.

Once given the advantage, Caruana crushed his opponent and picked up an important win.

GM Levon Aronian was up against GM Nikolas Theodorou, who after a stint at SLU is a familiar name on these shores. 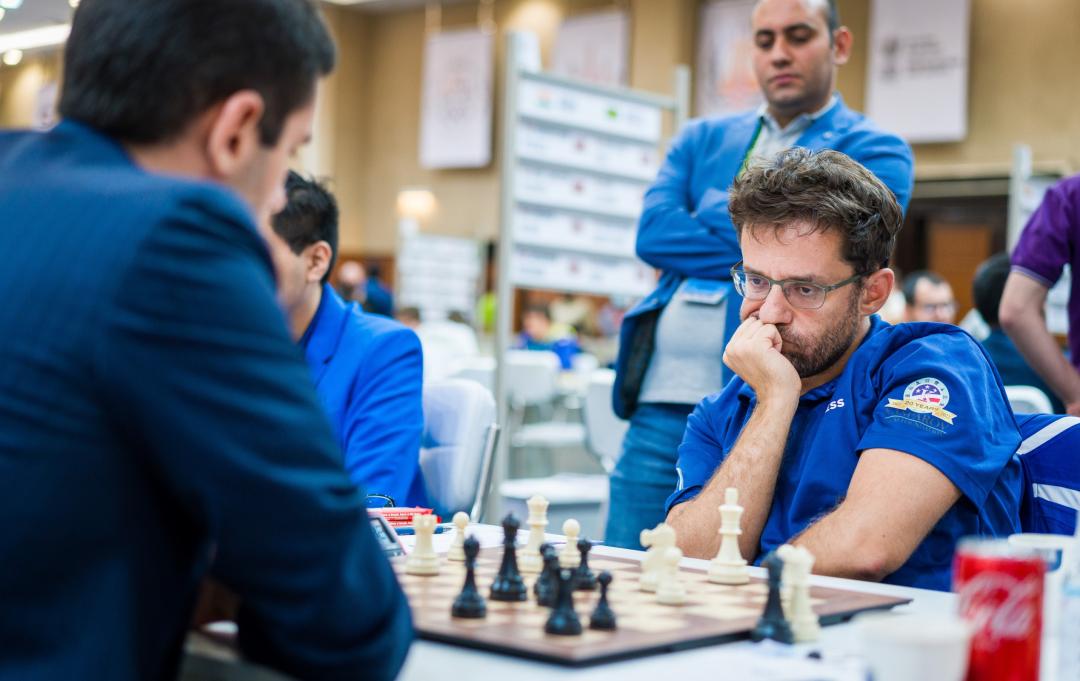 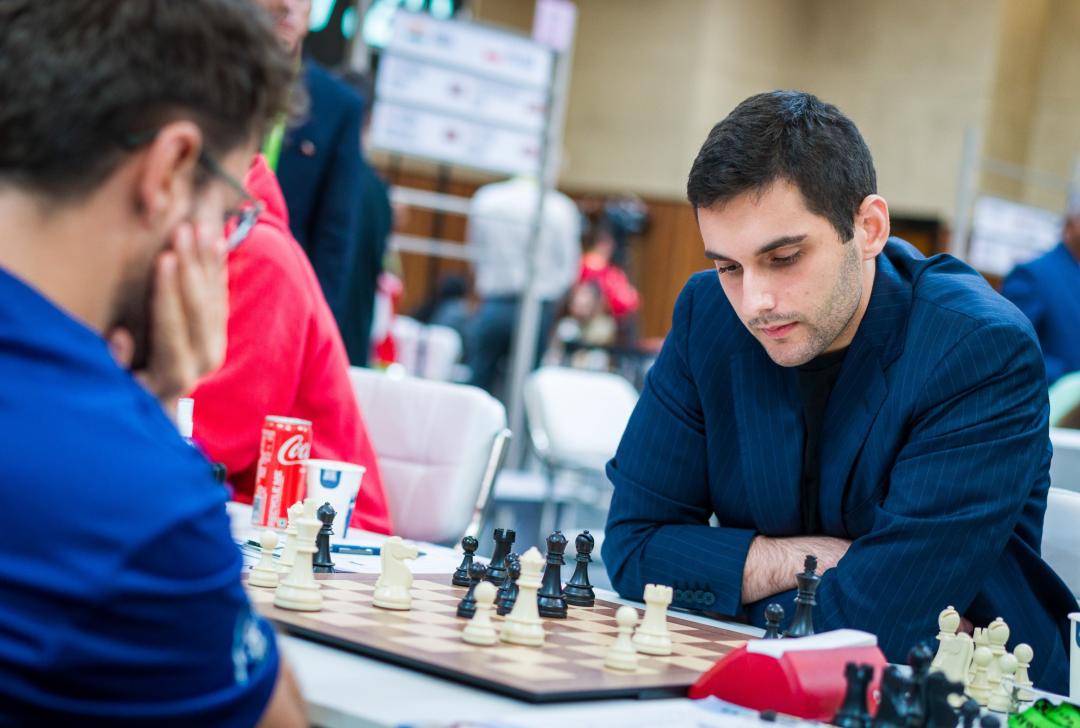 Playing White in a King’s Indian, Aronian went for intense complications, but got lost in them himself, blundering into a lost position on move 24. When Black did not find the best continuation, Aronian got another chance to get back into the game, but after another mistake on move 26, his opponent took command of the game and conducted an effective counterattack on White’s open king, ultimately securing the win.

In the third board encounter, GM Wesley So got the upper hand as Black in a Nimzo-Indian, when White saw his chance, he attempted to exchange into a rook ending a pawn down, but where it would be a trivial draw. 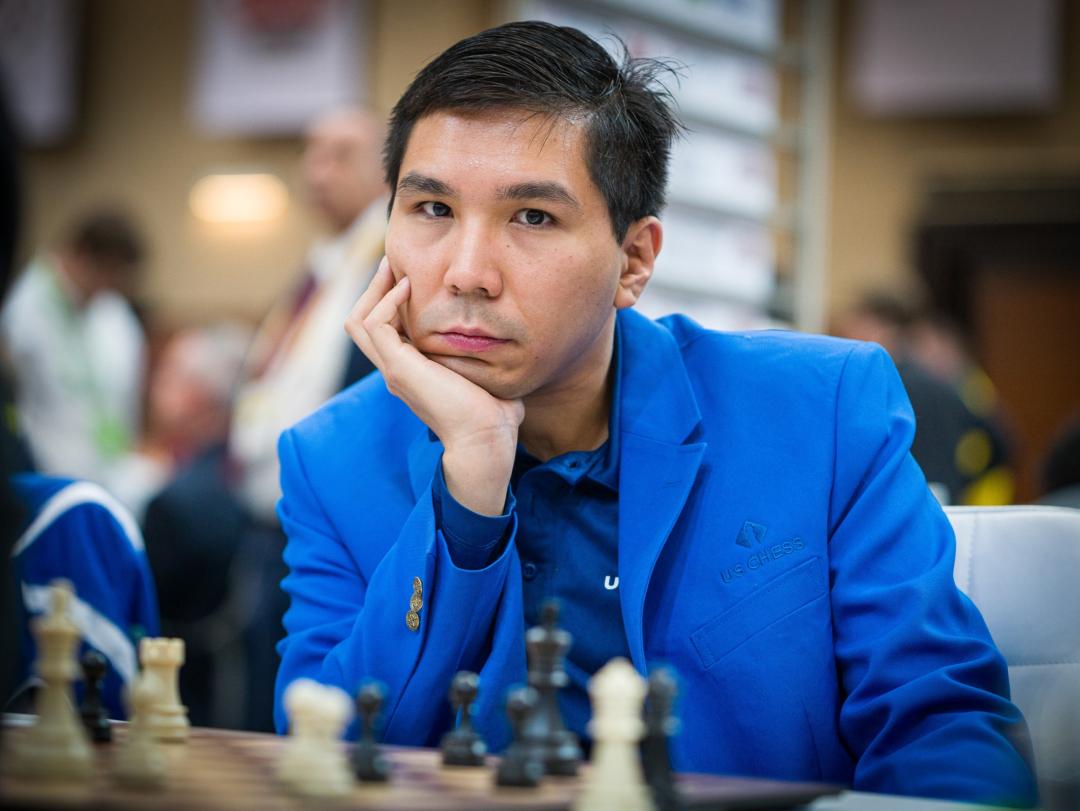 However, he had clear forgotten that So did not need to capture the pawn right away, but instead played the crucial 28. … g5!, which prevented White from achieving the ideal set-up with h2-h4. The resulting endgame is far from lost for White, but the drawing/losing margin is rather fine. In the continuation, White played too passively and did not manage to hold the balance. An excellent endgame performance by Wesley So.

The final game to finish saw GM Leinier Dominguez Perez with the white pieces against GM Hristos Banikas. In a Caro-Kann, White seemed to have the better chances, with occasional and sometimes significantly better chances for the majority of the game. Black, however, hung in there, despite having to defend a passive, unpleasant endgame. In the end, with only the kings remaining on the board, the players shook hands.

In the top matches, there was lots of drama to keep chess fans happy. India 2 managed to beat Azerbaijan after GM Praggnanandhaa won in a ridiculously complicated game where the evaluation bar suffered from whiplash in the final phase.

So: with two rounds left, Saturday’s results left Uzbekistan as the sole leader of the pack with 16 match points. India 2 and Armenia are one point behind. Then follows a group that includes the U.S. team at two points behind the leaders.

Like the Open team, the American women were significant rating favorites against Greece. 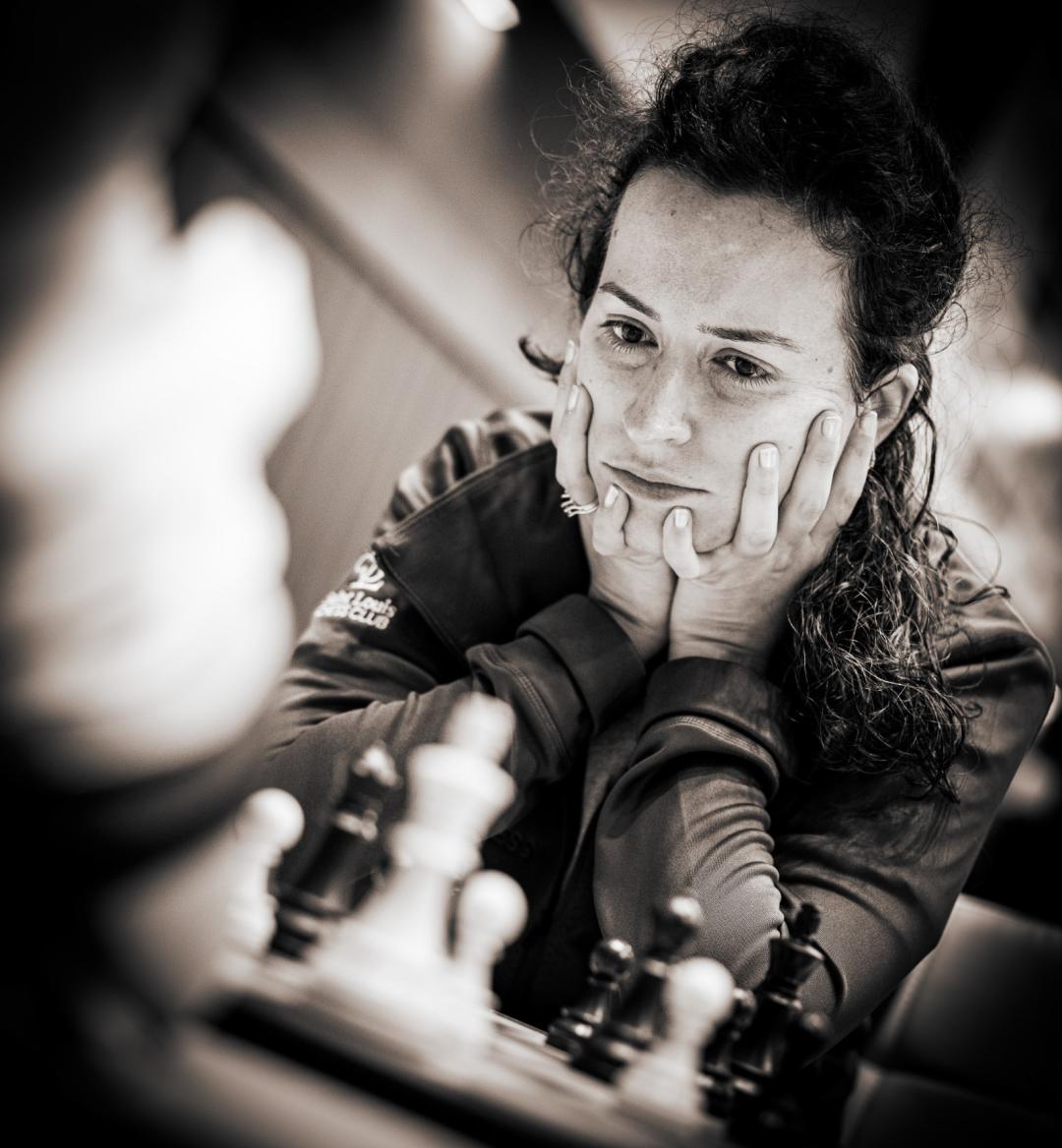 The first game to finish was that of GM Irina Krush, who sacrificed the exchange for two pawns in the opening and won a beautiful, convincing game.

Next up was IM Carissa Yip, who in an unbalanced King’s Indian Defense as Black gained a good position. 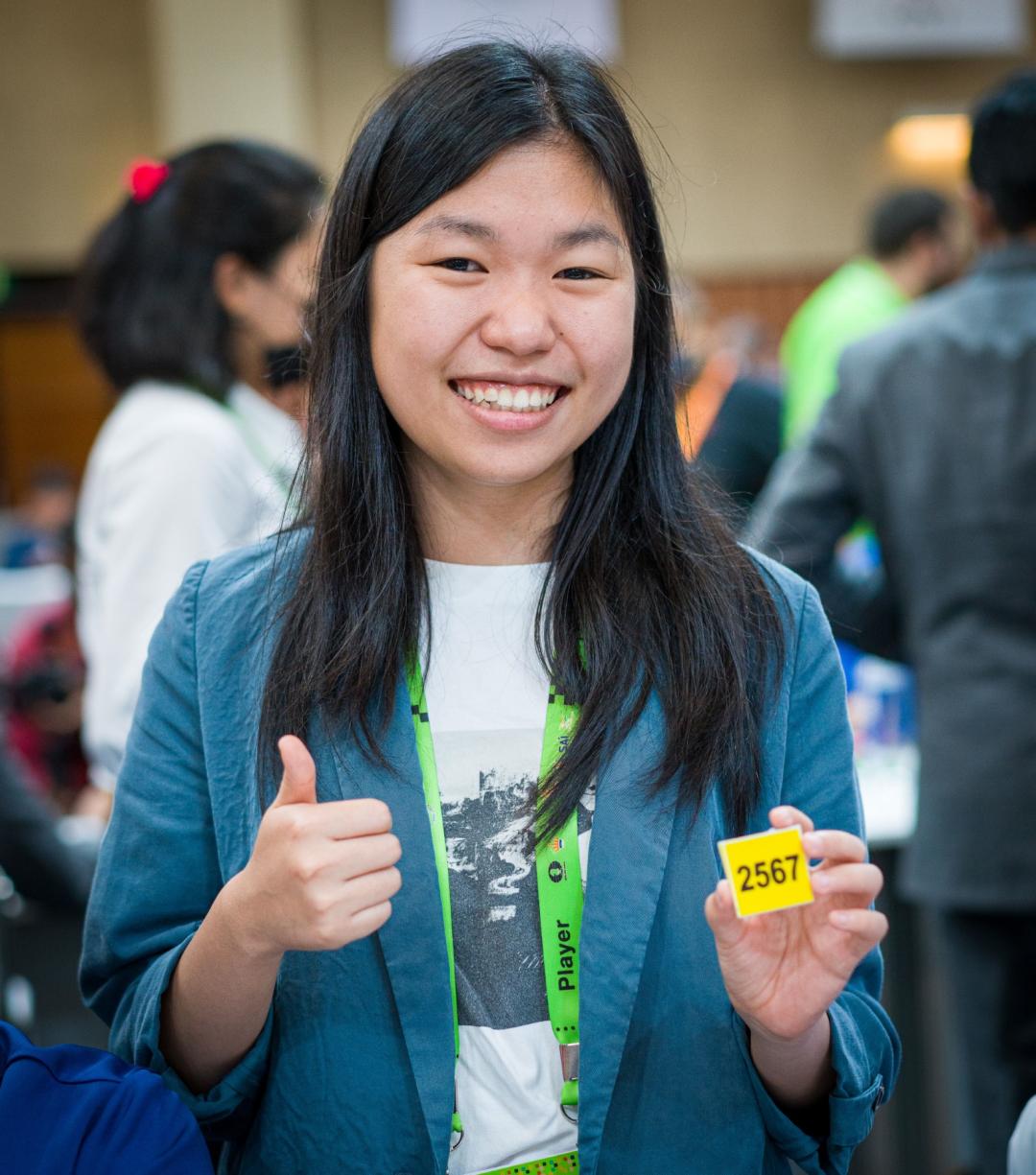 However, in the ensuing complications, White found a way to an advantage, but as Yip dialed up the complexity of the position, White could not find the way, went wrong and leaving Yip with a won endgame which was confidently converted.

On the difficult board one, WGM Gulrukhbegim Tokhirjonova was up against IM Stavroula Tsolakidou as Black. In a complex Grunfeld Indian, White played hard for the initiative and seemed to create trouble for Black on the kingside. But through accurate defense, the white attack an initiative was diffused. While Black in the final position was down two pawns, Black was never truly worse. An excellent effort by Tokhirjonova.

Like in the men’s match, the last board to finish was board four, where Tatev Abrahamyan played the Ruy Lopez with the white pieces. She seemed to gain some initiative, but Black always was always able to keep things fairly tight. In a rook and opposite-colored bishop endgame, White had a small plus, but until move 68, it looked likely that Black would hold the draw. But after a couple of mistakes, Black’s defense went from challenging to impossible and Abrahamyan converted the advantage to a full point.

All in all, a convincing victory by the US team.

At the top of the leaderboard, Poland sensationally defeated Indian 1 when Kiolbasa managed beat Vaishali in a drawn rook ending. This allowed three teams to catch up, leaving a four-way tie between India, Poland, Georgia and Kazakhstan, all with 15 match points. Behind them follow the U.S. team, and several others. With two rounds to go there is still all to play for.

When in the 90 year old history of The NEW US CHESS did you ever see......SEE IT RIGHT NOW great coverage /massive analysis and timely to boot? Tell me friends neighbors and countrymen..When? ............... Like the way those US chess Olympiad team losses are taken apart with no nonsense also. Believe :the little kiddies can handle it! The Thrilla from Chennai...for the first time in their lives...... many chess players are going right to NEW US CHESS website RIGHT NOW to review the games of the 44th Chennai world team Olympiad (all time record 188 world teams!!!!!!!). Oh man I am glad I lived to see this ....Because US Chess is last it will be first..can adapt and is not calcified. Jude Acers/New Orleans