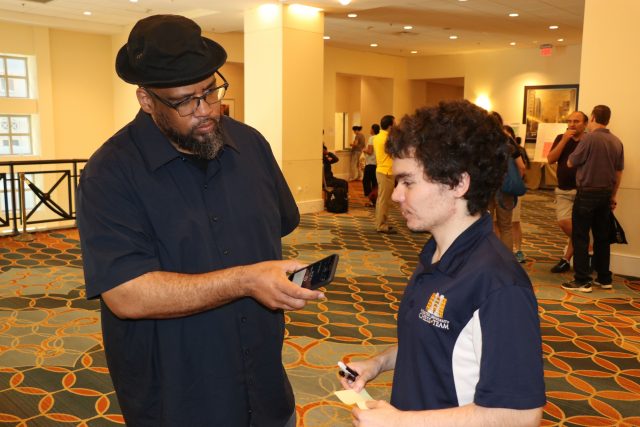 Jamaal Abdul-Alim interviews Illia Nyzhnyk, Photo Daaim Shabazz
PHILADELPHIA — Even before GM Illia I. Nyzhnyk found himself on track to clinch first place at the 2018 World Open this past weekend, he was no stranger to the winner’s circle at the premier chess tournament. Indeed, Nyzhnyk — who recently graduated with a bachelor’s degree in mathematics and computer science from Webster University — tied for first at the World Open in 2014,  2015 and 2016. But this year marked a new high for Nyzhnyk at the World Open. Specifically, this is the first time that the young Ukrainian grandmaster won clear first place, which came with a prize of $20,000. Even though he practices up to seven hours a day, regularly practices with his teammates at Webster and spends considerable time on openings, Nyzhnyk harbors no illusions about the role that luck played in his ascension to first place at this year’s World Open, which – as it has in years past – drew more than a thousand players from throughout the country and around the world to the City of Brotherly Love on the Fourth of July holiday weekend. “I’m really happy that this happened,” Nyzhnyk said of winning first place. But he was quick to add how he got “extremely lucky” in his penultimate game against his former teammate at Webster, GM Le Quang Liem. “My position was really bad throughout the whole game,” Nyzhnyk said of his Round 8 game against Liem. “As he was about to finish me off, he made a terrible blunder and lost the game in one move,” Nyzhnyk recounted of 84. g4, after which Liem would either lose his queen by force or be checkmated in the following game: “It didn’t really make me happy or anything,” Nyzhnyk said of his fortune in Round 8. “I believe I deserved to lose the game. It shouldn’t have happened but it happened anyway so I got rewarded.” At the same time, it’s not as if preparation didn’t come into play for Nyzhnyk at the World Open. Nyzhnyk says he was motivated to improve after his lackluster performance at the Chicago Open earlier this year. “I lost rating points. I didn’t win any prizes or anything,” he says of having scored 5.5 out of 9 points in Chicago earlier this year. The hard work paid off in multiple ways. For instance, Nyzhnyk scored his first victory against GM Samuel Sevian, whereas previously he had only drawn or lost to the 17-year-old Sevian. Nyzhnyk says he prepared specifically for Sevian. “It worked out and I got a better position out of the opening even though I wasn’t playing accurately afterwards,” Nyzhnyk says of his game against Sevian. Nyzhnyk – the only player who entered the ninth and final round with seven points — says he agreed to a quick draw against his current teammate and good friend, GM Alex Shimanov. “I was too tired from the first game (earlier in the day). I only had like a 20-minute break after the first game, so I was like it will just be safer if I take what is given to me,” he said.

Photo Betsy Dynako
Nyzhnyk – who plans to return to Webster this fall to pursue a master’s degree in cybersecurity. He says he is thankful to Webster University for sponsoring his participation in the World Open and grateful for the support of his coach at Webster, GM Susan Polgar. 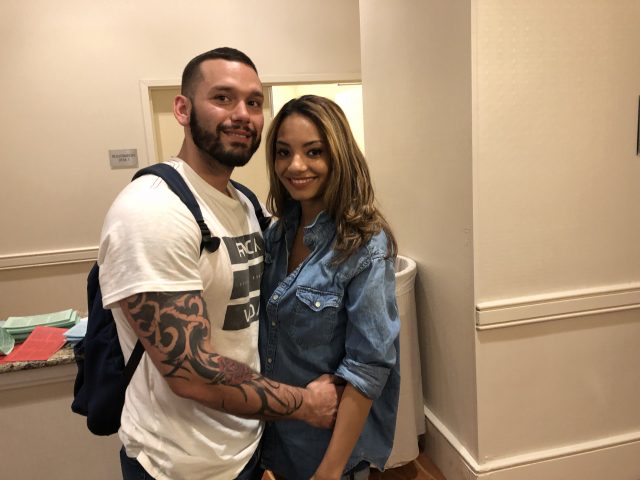 Oliver and his girlfriend after a successful weekend
Gratitude for chess coaches was easy to find among winners at the World Open. Oliver Lombardi, 28, a bartender from Jersey City, New Jersey, took clear first place and $12,000 in the U2000 section after scoring 8.5 out of 9 points. He says he never would have excelled at chess were it not for his high school coach, Larry Bias, of Pocono Mountain East High School. He also credited GMs and blitz with friends and associates with helping him to win. “The preparation for me is not like for most chess players,” Lombardi said. “I usually just look at Grandmaster games online and play a lot of blitz,” adding that he also plays blitz against the Shredder computer chess app. Lombardi says winning first place was a welcome change from when he played the World Open in 2012 back and only scored 6.5 out of 9 in the U1800 section. “I just got into the rhythm and stayed focused,” Lombardi said. Find full standings of the World Open and look for an update to this article on norm-finishes.  Jamaal Abdul-Alim is a frequent contributor to US Chess and a former Chess Journalist of the Year. He is the Education Editor at The Conversation US.  Follow him on twitter at https://twitter.com/dcwriter360.
SHARE: