The Charlotte Chess Center and Scholastic Academy organized its fourth GM/IM Norm Invitational this January 11-15.  CCCSA is perhaps becoming an American “norm factory,” having produced several norms and titles in 2016 and 2017.  Organizers Peter Giannatos and Grant Oen have scheduled five GM/IM events in 2018 – four Round Robin invitationals and one “super swiss” open event.  Our previous events have been covered by US Chess News – March 2016, March 2017, and November 2017. The January 2018 event was very strong, as Charlotte hosted 6 GMs, 14 IMs, 7 FMs, and 3 masters – the average rating of all thirty players was 2400 FIDE and 2480 USCF.  It was quite an international field, with players from 13 federations playing in 3 sections – two GM norm round robins and one IM norm round robin. The five-day event certainly exceeded expectations regarding results, as there were four major performances throughout the field: 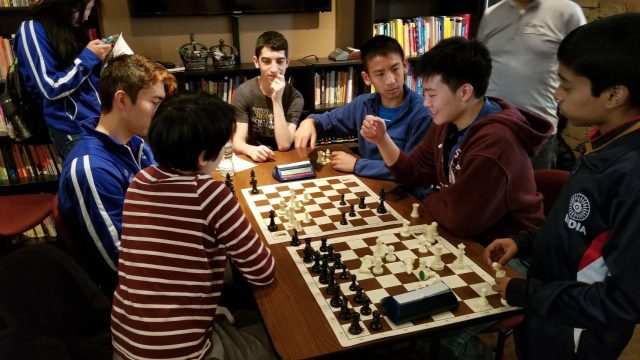 IM-elect Kevin Wang (red sweatshirt) playing tandem chess after securing his IM title.  Can you name all these players? 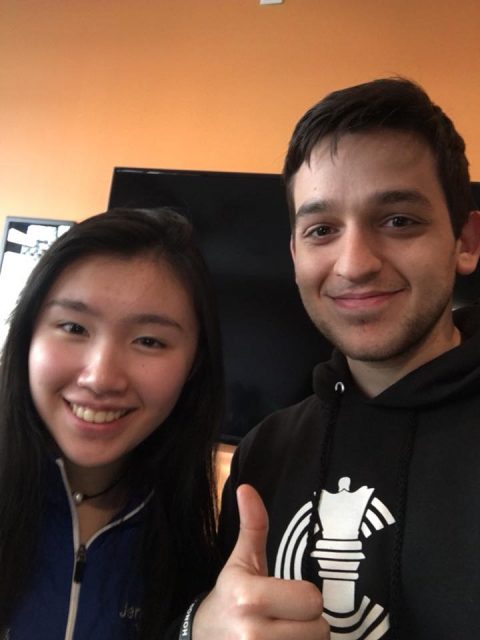 Jennifer Yu and Organizer Peter Giannatos pose for the “Charlotte Norm Selfie"
Two notable players who missed their GM norms were IM John Bartholomew and IM Praggnanandhaa. John Bartholomew has a great following on his Youtube channel.  He had an excellent performance, with an undefeated three wins and six draws. https://twitter.com/fins0905/status/952974447396474880 He had good winning chances against IM David Brodsky in the final round, but understandably drew the game in mutual time pressure: Although he just missed the norm, John should be proud of his result, as he finished in clear first in a strong field, posting a 2568 FIDE performance.

Chess fans around the world were also tracking the results of India’s Praggnanandhaa Rameshbabu.  “Pragg” is the youngest IM in the world and still can break GM Sergey Karjakin’s record as the youngest Grandmaster in the world.  After a slow start, Pragg was able to score a solid 5/9 result. Although he finished a bit short of the GM norm, Praggnanandhaa had a great time in Charlotte, which was his second tournament in the United States.  He was not unscathed in a bullet duel with CCCSA’s Peter Giannatos: His positional outmaneuvering of his countryman GM Magesh Panchanathan was certainly a highlight: In the second GM group, IM John Burke and GM Denis Kadric tied for first with 6.5/9, with Burke earning his final GM norm in a very strong field. 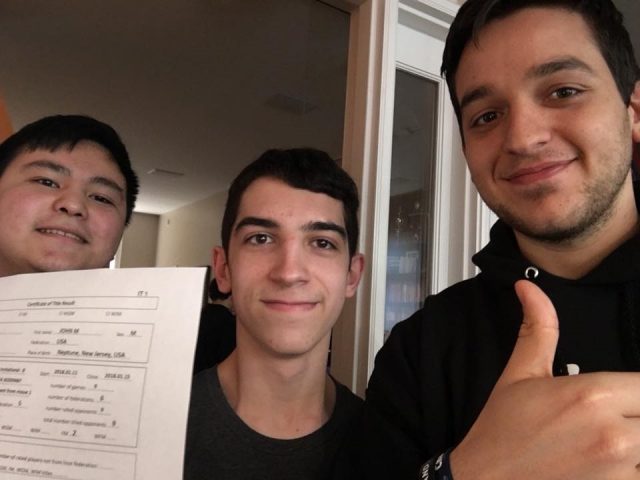 Organizers Grant Oen (L) and Peter Giannatos (R) with GM-elect John Burke
In the IM Round Robin, many people were in norm contention throughout the event.  Benjamin Moon started off with the only 3-0 score of the tournament, but was unable to maintain his form and ended with an even score.  Moon’s first two games ended with checkmate!  In the first round, Chicago’s IM Angelo Young played a dubious opening and was brutally punished: 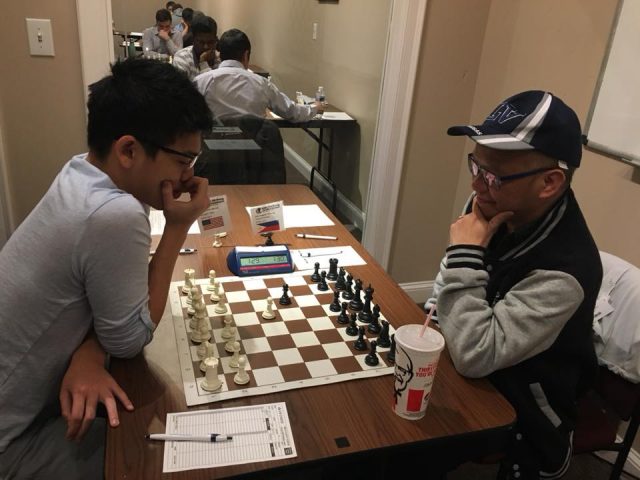 Benjamin Moon vs Angelo Young 1-0
Moon also played a nice game in the Accelerated Dragon against Canadian FM Gary Ng in round 2, featuring a pretty checkmate:

The winners of the IM section were Lithuanian IM Titas Stremavicius (pictured below), who plays for the UT Dallas chess team, and FM Jennifer Yu, who earned a double IM/WGM norm. 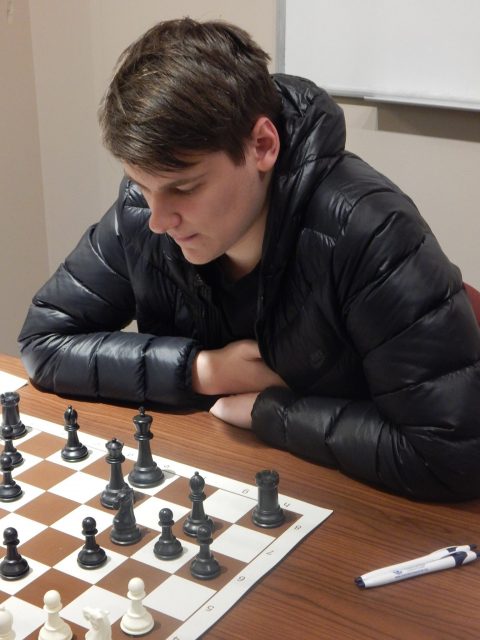 IM Titas Stremavicius
The event was a great success, as CM Wesley Wang became an FM, FM Kevin Wang became an IM, IM John Burke became a GM, and FM Jennifer Yu earned her second IM and WGM norms. The event was organized by the Charlotte Chess Center.  Games and standings can be found on Chessstream courtesy of Chacha Dejava.  Video interviews and pictures can be found on CCCSA’s Youtube Channel and Facebook page.  Thanks very much to FIDE Arbiters Korey Kormick and Anand Dommalapati for directing the event.  Both earned International Arbiter norms.  Our next Round Robin event is March 28 – April 1.

Grant Oen is the Manager of FIDE Ratings and US Chess Titles and Certifications for US Chess.  He also works for the Charlotte Chess Center in North Carolina and is the youngest FIDE Arbiter in the United States.  He can be contacted at grant@charlottechesscenter.org.
SHARE: