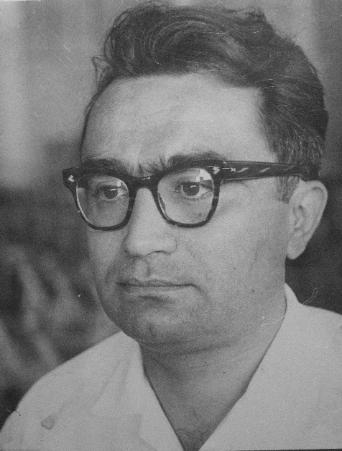 Few individuals have had as big an impact on the chess world as International Master Nikolay Minev who died on March 10, 2017, in Seattle, Washington. Minev, who was born on November 8, 1931, in Ruse, Bulgaria, didn’t take chess seriously until he was 15, but made quick progress tying for first in the 1951 Bulgarian Championship. He lost the playoff but would go on to win the title in 1953, 1965 and 1966. Minev further cemented his position as one of the top Bulgarian players of the 1950s and 60s by representing his country in six Olympiads where he often played first board and met the likes of Mikhail Botvinnik, Tigran Petrosian and Bobby Fischer. 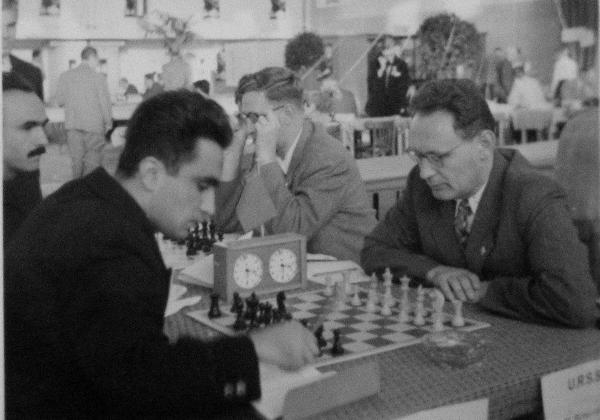 Nikolay Minev playing Mikhail Botvinnik at the 1954 Chess Olympiad in Amsterdam
Minev received the International Master title in 1960, but was never a professional player. He received his medical degree in 1956 and practiced medicine until 1972 when he was named editor of the Bulgarian national chess magazine Shakmatna Misl, a position he held until 1979 when he took a position as a trainer in Greece. Previous to this move Minev had combined his editorial responsibilities with training Ivan Radulov who became the top Bulgarian player of the 1970s. Minev enjoyed even greater success in Greece, a country which in 1979 had no Grandmasters and few International Masters. He played an important role in the development of future Grandmasters Efstratios Grivas, Vasilios Kotronias and Spyridon Skembris who were the beginning of a chess renaissance in Greece. 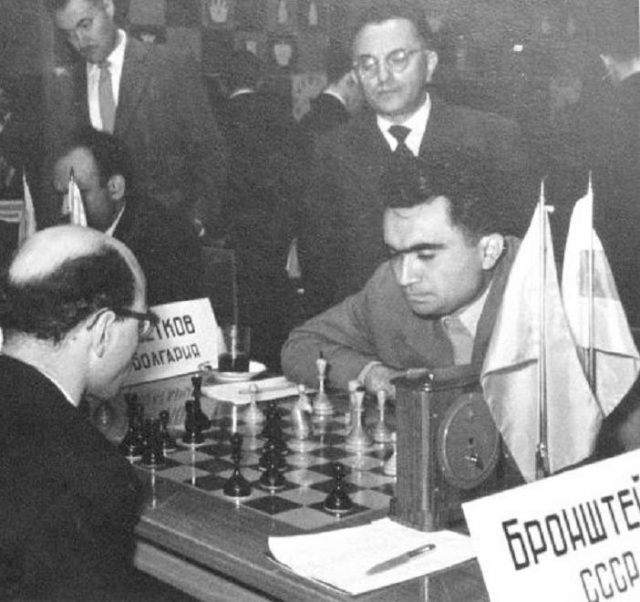 Nikolay Minev playing David Bronstein at the 1956 Chess Olympiad in Moscow
Minev and his wife Elena were supposed to return to Bulgaria in 1983, but tired of living under communism they instead defected, ended up settling in the United States after a short stay in Vienna. The chess community in Seattle was the beneficiary of their move and not long after settling in his new homeland Minev was editing the local publication Northwest Chess and writing for Players Chess News and Theory and Analysis. When Yasser Seirawan started Inside Chess in 1988 he turned to his good friend Nikolay Minev to be one of the key contributors for the new magazine. Minev’s column on tactics proved to be particularly popular as he had a knack for writing instructive material that was also entertaining. While Minev could engage the club player he could also appeal to the very strongest. Garry Kasparov gave his highest praise to Minev’s 1980 work on rook and pawn endings Ednotopovni Endtspili, a portion of which was later published as A Practical Guide to Rook End Games. This book served as the basis for the volume on rook and pawn ending in the Encyclopedia of Chess Endings series. Minev was closely involved in the Encyclopedia of Chess Endings project and the Encyclopedia of Chess Openings series, continuing a longtime relationship with Chess Informant. All told he was the author of over thirty books on all aspects of chess. 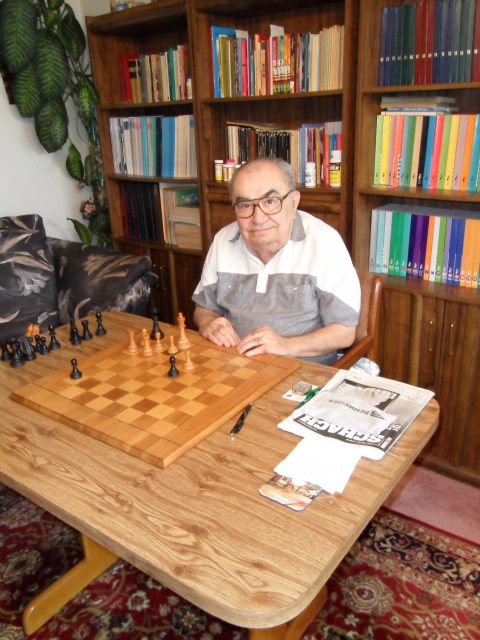 Nikolay Minev at work in his study. (Photo by Derrick Robinson)
Minev was in in his fifties when he settled in the United States, but that didn’t stop him from tying for first in the 1983 American Open and winning the Oregon Open on three occasions in the 1980s. Minev taught much more than he played after settling in Seattle and among his pupils was two-time Washington State Champion and current Washington Attorney General Bob Ferguson. Nikolay Minev was a person of the highest integrity who will be sorely missed by his many friends around the world. Those wishing to learn more about this remarkable individual may wish to go to the website http://www.thechesslibrary.com/minev.html  which is a worthy tribute by his long-time friend and student Phil McCready.
SHARE: