Nikhil Kumar: From Gold in Batumi to Congress King in Philly 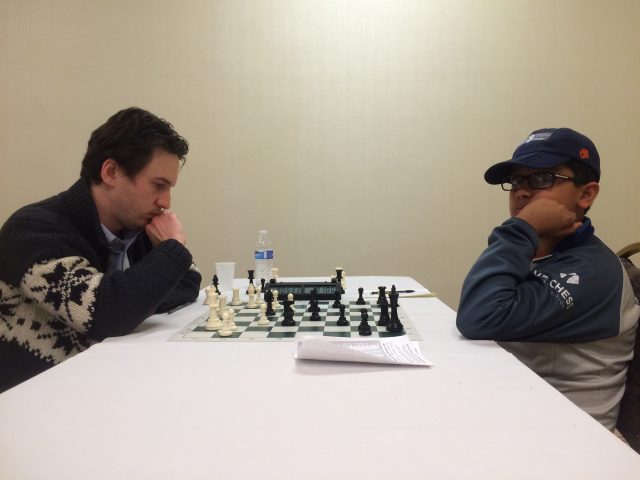 The first time Nikhil Kumar played in the National Congress a couple of years ago at age 10, his performance in the Under 2000 section was unremarkable. “I didn’t do so well,” recalled Kumar, who only scored three points in his first National Congress tournament back in 2014 But when Kumar played in the National Congress in Philadelphia this past Thanksgiving weekend, the newly minted National Master joined two GMs in a four-way tie for first place in the premier section — and subsequently won on tiebreaks — by scoring 5 out of 6 points after he drew one IM and drew against another GM — with the Black pieces, mind you — in the final round. “He’s on fire now,” said GM Sergey Erenburg, who drew by repetition against Kumar in Round 6 of the six-round tournament. “He’s probably the strength of at least an International Master,” Erenburg said of Kumar, who achieved the rank of NM this past September. Erenburg said he initially thought he could squeeze a victory out of his game against Kumar but ultimately found the task too difficult. “It was a tough game. I thought I had some pressure, a slight advantage, but my opponent defended very well,” Erenburg said of his Round 6 game against Kumar. Asked about the game ending in draw by repetition, Erenburg said: “I can’t deviate because otherwise I would either lose a bishop or enter an inferior end game. Probably it’s still a draw but I cannot win.” 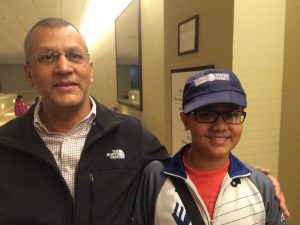 “He has a bright future,” Erenburg said of Kumar. “As long as he works hard and has the support of his family, which he has.” Indeed, Kumar’s father, Alok Kumar, professor and chair of finance department at the University of Miami, attributed his son’s success to an “amazing investment” in coaching, namely, Cuban-born IM Alejandro Moreno — the chess coach at the University of Miami — and Israeli GM Boris Avrukh. “He started playing chess only four years ago,” the elder Kumar said of his son. “In four years, his progress has been phenomenal. It wouldn’t have happened without a proper coach.” At the same time, the younger Kumar — who recently won gold at Open Under 12 section of the World Cadets in Batumi — has been doing his part by putting in some serious study time. He estimated that — after schoolwork — he spends three hours on chess every day. Part of his study involves looking at GM games on ChessBase or reading books by authors such as Andy Soltis. Online chess videos, he said, constitute only a small part of his study regimen. Asked for his favorite GM, Kumar said he looks up to former world champion Viswanathan Anand. “I like Vishy Anand because he’s also from India like me,” said Kumar, a Floridian whose parents are from India. Here are some other noteworthy games from the 2016 National Congress, which drew about 600 registrants, according to officials at the Continental Chess Association. 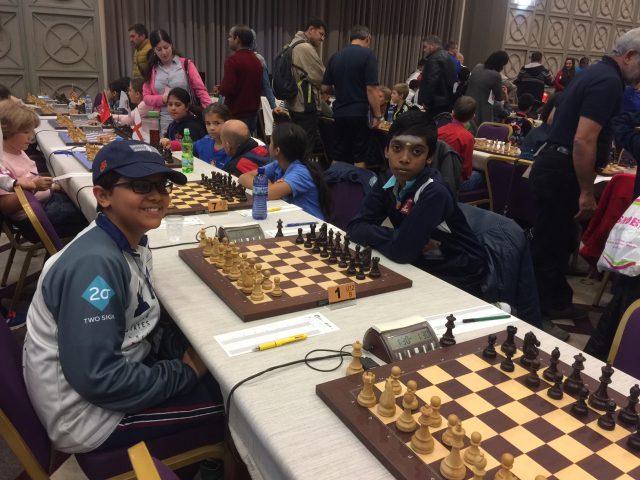 Nikhil Kumar at the World Youth in Batumi, Georgia, here vs. IM Rameshbabu Praggnanandhaa
In other news, this US Chess writer decided it was time to enforce Rule 15A of the US Chess Federation’s Rules of Chess, and not allow my opponents to write down their moves before they make them — and sometimes erase them and write down other moves. “What are you writing?” I asked my opponent, who shall remain nameless out of respect. “I’m just writing down ideas,” my opponent responded defiantly. “I’m indecisive.” As if that weren’t a big deal. As if GM Wesely So didn’t get forfeited in the US Championship in 2015 for doing something similar, albeit not exactly the same. “If you do it again I’m telling the tournament director,” I said after he did it a second time. I then proceeded to tell a TD I saw approaching my board because I thought he had heard the commotion and was there to investigate or intervene. The TD advised the player to make his moves first and then record them. I don’t know if the young player was rattled, but soon after he played 26. Ne3: [fen]4r3/1p3pk1/pn3pp1/6qp/3P4/1P1QN3/P3rPPP/R2R2K1 b - - 0 26[/fen] He probably thought he was disconnecting my rooks. Turns out, it was a fatal error, which I had been eagerly awaiting and responded to immediately with 26 …. Rxe3! White now realizes he cannot capture the rook with the f-pawn or else he will get mated with Qg2. The game proceeded 27. Qxe3 Rxe3, and things were pretty much a cinch from there. Find full standings at http://www.nationalchesscongress.com/ Jamaal Abdul-Alim is a Washington, DC-based journalist who covers higher education and chess. You can follow him on Twitter @dcwriter360.
SHARE: