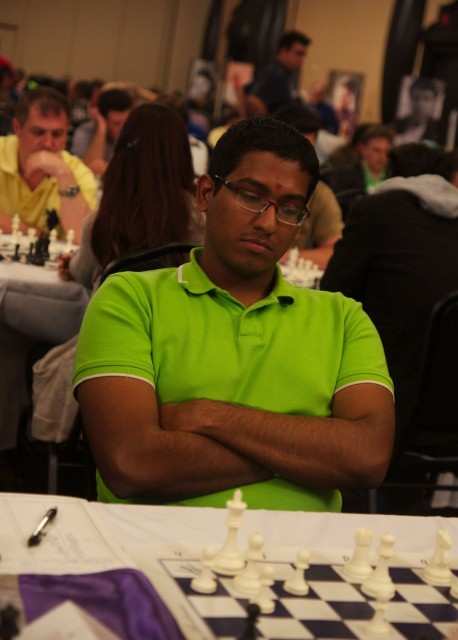 IM Kannappan at the 2015 Millionaire Chess Open, Photo WIM Sabrina Chevannes
The Pan-American Collegiate Championship is the last tournament of the calendar year for college students in the United States, and this year the event was hosted by Oberlin College from Dec 27-30, 2015. I wore the black and gold colors of Lindenwood for one last time in a team tournament, as this was my 4th Pan-Ams for the Lions, and I will be graduating in May 2016, with a Bachelor’s degree in Marketing. The tournament was a bittersweet one for us, as we had a shot at the title going into the final round, but we lost to Columbia University 1.5-2.5 to finish 8th with a score of 4/6. The individual performances were also bittersweet as three of the Lions had chances to win a board medal going into the Final round, but none of the Lions won a prize the end. I scored 5/6 on the top board, and ended up 3rd on the board rankings, Nicholas Rosenthal scored 3/6 on board 2, Alex Richter scored 5/6 and tied for the board prize on board 3 but was edged out on tiebreak's by GM Holden Hernandez from UTRGV, and our board 4 Nolan Hendrickson scored 4.5/6 and finished 4th on the standings. In a mediocre tournament performance, there is always lot to takeaway, and I wanted to share with you what I learned from this event:  Before the start of the event, I was highly pessimistic about Lindenwood's chances of finishing in the top 4. My pessimism stemmed from my experiences in the previous Pan-Ams and also based on how weak we were by strength(2353) compared to the "GIANTS" of the collegiate chess like Webster-A(2747), Texas Tech-A(2657),UTD-A(2632), UTRGV-A(2619) and there were also a few B-teams of these giants, who were higher rated than us. On the other end of the spectrum was one of my teammates, who was bubbling with optimism and positive energy about our chances of qualifying for the final four, and he was right in many ways, as combined with some strong individual performances and some luck in the pairings we had 4 points out of 5 rounds and were paired against Columbia University in the final round, whose rating average was slightly lower than us! I just then realized that winning the final round would get us a spot in the top 4, and qualify us to the Final Four of Collegiate Chess. As I had mentioned, we didn't manage to qualify, but the fact that we came that close made me realize that being positive can make success more likely. 2) No stress theory My teammate Nolan who majors in Psychology, has many ideas and theories in the field, and he told me a hypothesis before the tournament: "Students who graduate in December, a few days before the tournament begins, will do exceedingly well in this tournament." His reasoning was that, The biggest stress of students is college, and when you graduate, all the stress of college goes away, and you only focus on chess. Nolan decided to test his hypothesis with a sample size of one (As he could only find one case study in the tournament). The subject of this test was Alex Richter, board 3 of our team, who had a terrific tournament scoring 5/6, and also going the past 2300 USCF rating for the first time in his career.  The moral of this hypothesis is that, when you are stress free, you tend to play your natural game, where ideas come naturally, producing great results on the board.  3) Have a surprise weapon Nolan, who is our board 4, had the black pieces against GM Ray Robson, who is an expert in the Sicilian Dragon with both colors. The problem was that the Dragon was the mainline of Nolan's preparation and he wasn't confident enough to play it against Robson. In a such dire situation, we needed a surprise weapon to take Ray out of his preparation, and I suggested Nolan to try a sideline in the Modern Defense, which I have used effectively, so I gave my analysis. In just two hours, Nolan was ready to face one of the top GMs in the world with a completely new opening. The opening appeared on the board as expected and worked like a charm.    If you are not sure about your main opening at any point, it is important to have a sideline as a surprise weapon, which will throw your opponent out of his prep, and will give you a huge advantage psychologically and also a considerable lead on time. 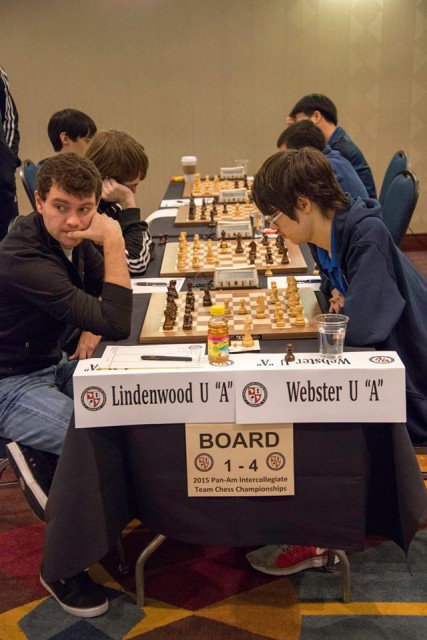 Playing against the "Giants" Webster-A, and Nolan has just whipped out ...d5!? We lost 1-3. Photo Oberlin College Chess Club
4) Playing What You Know  If point #3 was about surprising your opponent, this one is about having complete faith in your openings and sticking to it, irrespective of your opponent’s rating. I was paired against GM Le Quang Liem from Webster-A. In a team setting, having the white pieces means you have to push for a win, especially as we were extremely out rated on boards 2,3, and 4. I faced the dilemma of whether to play a surprise opening and take him out of his preparation or stick to my Sicilian Moscow, which will not give an edge against a 2700 GM, but will lead to positions where I feel extremely comfortable.  I talked to coach GM Goldin, who told me to stick to what I know best, and the result was a very pleasant edge out of the opening against a 2700 FIDE rated player!   I hope US Chess readers have a great 2016 and can use some of the tips in this article to reach your life and chess goals.  Find Al Lawrence's Pan-Am wrap-up here and see the official website here.
SHARE: