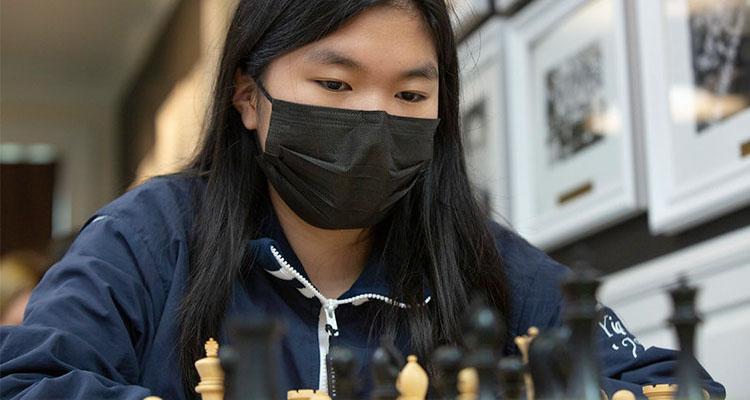 In 1976, former U.S. President Gerald Ford asked that the royal game be celebrated on the second Saturday every October – a National Chess Day – which over the weekend coincided with the US Chess national championships in St. Louis, and two marquee matchups in its fourth round: A tilt between America’s top-two players, and another between the nation’s top-two females.

Two of them found it appropriate to hand out gifts for the 2021 holiday.

Defending U.S. Champion GM Wesley So, apparently in an extra-giving mood -- also celebrating his 28th birthday on Saturday -- let the tournament’s top-seed and World No. 2 GM Fabiano Caruana off the hook in the fourth round over the weekend, choosing instead to play it safe after Caruana’s anti-positional 18. … e5? and letting the game collapse into a draw by perpetual check.

And 8-time U.S. Women’s Champion GM Irina Krush was even more generous on 2021’s National Chess Day, simply handing over her gift to the tournament’s second seed and rapidly rising IM Carissa Yip in the fourth round. Krush’s rollout was already clunky as Black in a Caro-Kann, but her 21. … Nb4? was a howler, leaving open an easy fork that was found immediately by the three-time U.S. Girls Champion. 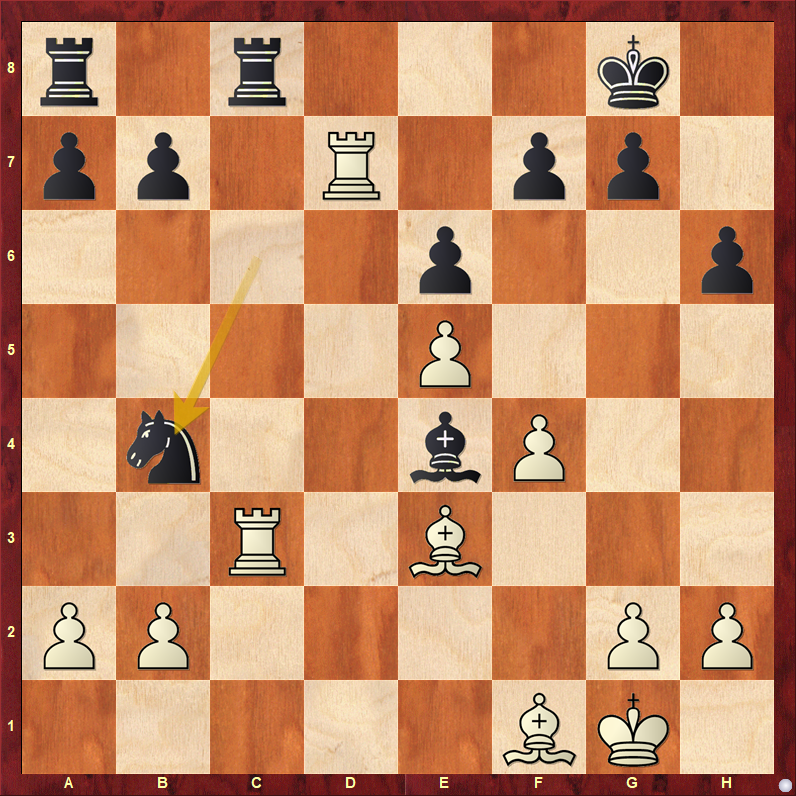 The stunner pushes Yip into a tie with leader WGM Katerina Nemcova at 3.0/4 in the 2021 U.S. Women’s Championship, while the peaceful So-Caruana result leaves them both in a five-player tie for second place in the American national chess championship. GM Ray Robson stepped in front of the pack with a win over struggling GM Jeffery Xiong in Saturday’s fourth round, though the leader still has pairings with four second-place players in front of him -- including Caruana, So and the other 2700-rated GM Leinier Dominguez. 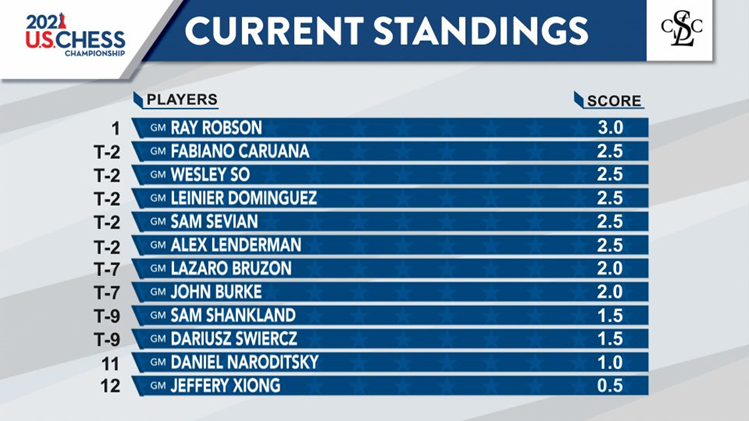 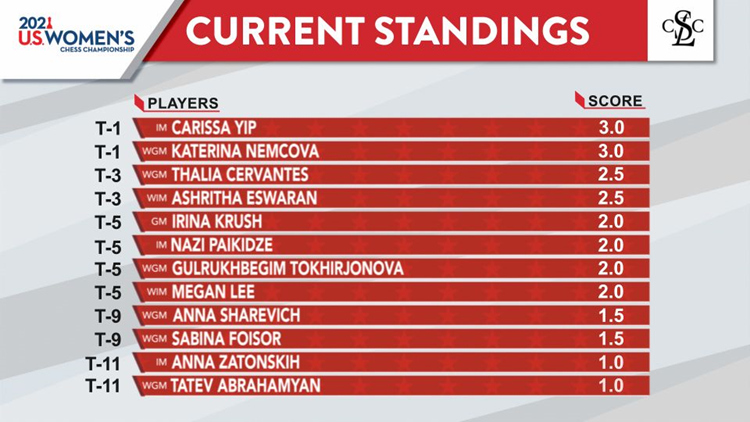 Sunday was a rest day in the nation’s chess capital, with Round 5 beginning Monday at 1:00 p.m. central in the Saint Louis Chess Club and broadcast live alongside GM commentary by Maurice Ashley, Cristian Chirila and four-time US Chess Champion Yasser Seirawan on YouTube and the official event website. 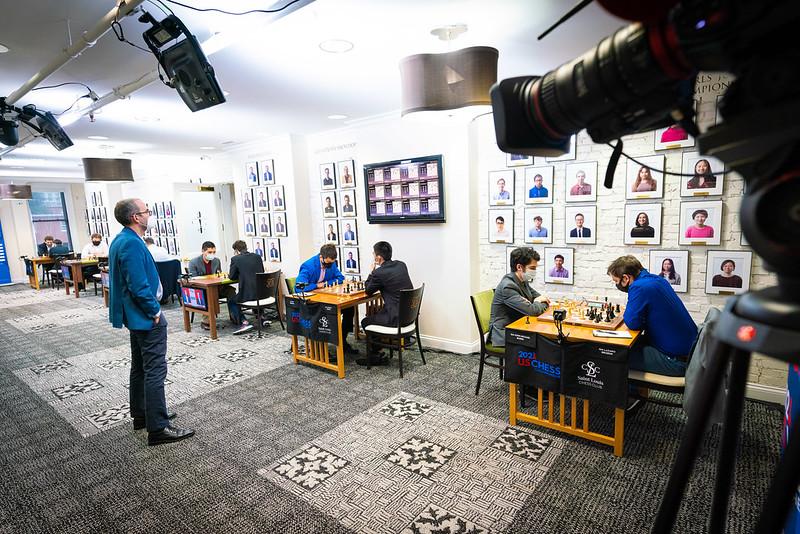 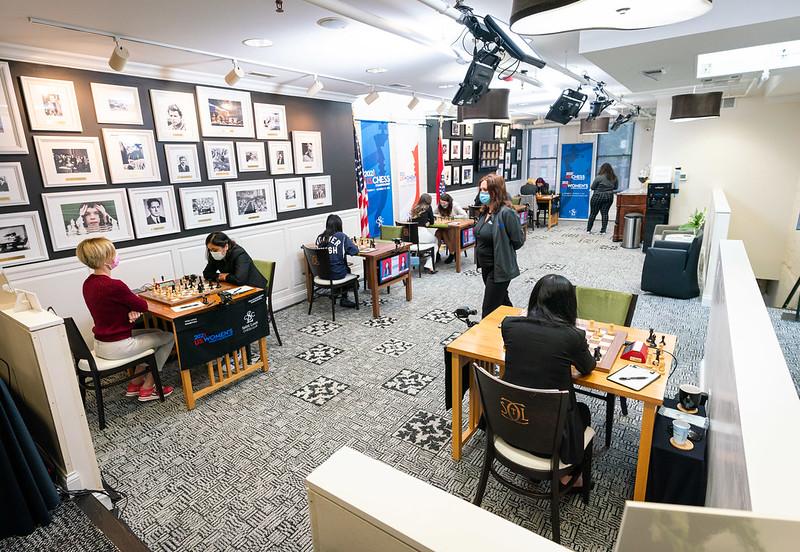 In Saturday's post-game interview, So admitted to falling prey to a bit of superstition, choosing to play it safe rather than risking the chances of losing on one’s birthday. In a Classical Nimzo, the defending U.S. Champion had scored the bishop pair at the cost of two sets of doubled pawns, though Caruana had stifled much of their ability with 11. … b5! and two quality outposts for the black knights. But Black seems to only unleash the pair with 18. ... e5?, which only produces a heavy-yet-defendable kingside attack; in postmortem, Caruana admitted embarrassment in playing this losing move, ignoring his initial 18. ... f5 and holding Black's advantage. But low on time after just 20 moves, So chose 20. exd6 instead of the winning-but-lengthy 20. ... Rd1, providing the White King an escape and a playable endgame with precise play. Caruana forced a draw by perpetual check after 26 moves.

Both WGMs Sabina Foisor and Tatev Abrahamyan have had rough starts in St. Louis, but the former 2017 U.S. Women’s Champion got the ball rolling in a nice Queen’s Gambit Accepted on Saturday. Foisor shows off some impressive tactical work in the middlegame, in CLO’s Round 4 Game of the Day, annotated here by two-time Tennessee State Champion NM Alex King. 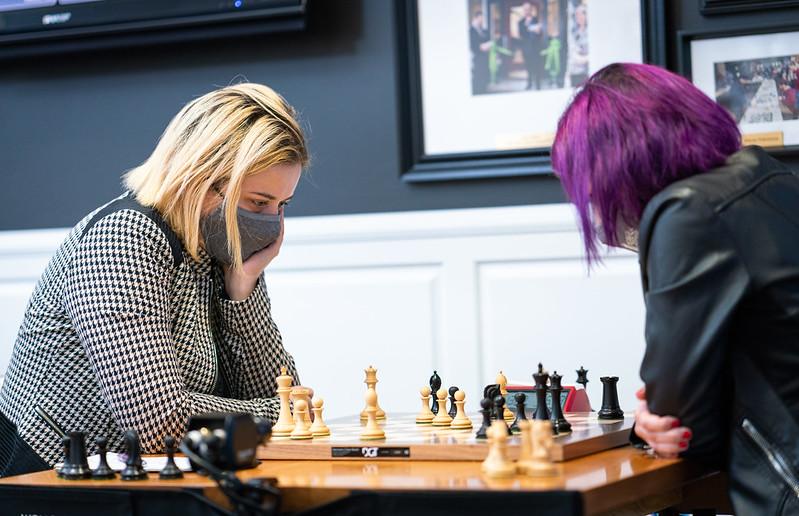 Serious good analytical notes and fast understandable commentary...VERY ENTERTAINING AND RED HOT COVERAGE OF WORLD CLASS CHESS.... does not even matter in the slightest if an occasional evaluation is a little off. The point is that great players are being given hurricane attention, not treated as a silly joke one liner, not a tiny footnote four months later ... If Fide Grandmaster I. Krush loses two games you get to feel her pain right now,,, ...My what a wonder it is after 65 years of chess play all over the world to see this. USCHESS..be proud. YOU ARE THERE.
Jude Acers/New Orleans