My Experience at the Schein-Friedman/U.S. Chess School Camp

It was a normal boring Wednesday afternoon. I was just coming back from a long day of school and I was not really expecting anything out of the ordinary to happen: some homework, some chess, and maybe I could have some free time. I lugged my three-ton backpack from the N train at the Union Square subway station, passing by some of the well-known chess hustlers in the park there. I wish I could have played some of them, but today I had to get home quickly for homework. When we (my babysitter, brother, sister, and I) finally got home, I was really looking forward to taking that backpack off my shoulders! Once we got to my apartment, I ran inside sighing with relief, just like all the other days, except today my mom was inexplicably happy.  This was the first time I had been invited to the Schein-Friedman chess camp -- we were going to Saint Louis! Our first encounter with the other Schein-Friedman campers was on the plane to Saint Louis. My mom and I were waiting at our gate, A3, (I remember the gate letter and number because I was thinking that’s not a great way to start the game). I was reading my book and my mom was texting my dad when we heard, “Akira.” I was excited when I saw it was the Shumans.  I have known Nate Shuman and his family for a long time – and had just celebrated Nate’s birthday party at a giant bughouse tournament at his house. Coincidentally, the Zhous were also on our flight -- we might as well have already been there!  Arriving at the Chase Park Plaza hotel was a truly amazing experience; the rooms were huge and we had a great view of the pool, and there was a sparkling glass chandelier in the lobby of the building. We were set for this camp. Now let’s get to the camp. This camp, which is co-sponsored by the U.S. Chess School, is an invitational camp for the top young players in the country to study with some of the best instructors in the country.  Amazingly, the camp is completely free for the players. The camp was four days long, Wednesday through Sunday and included 15 of the top boys and girls in the country for ages 9-13. For me to be included in this was a big deal and a great honor. 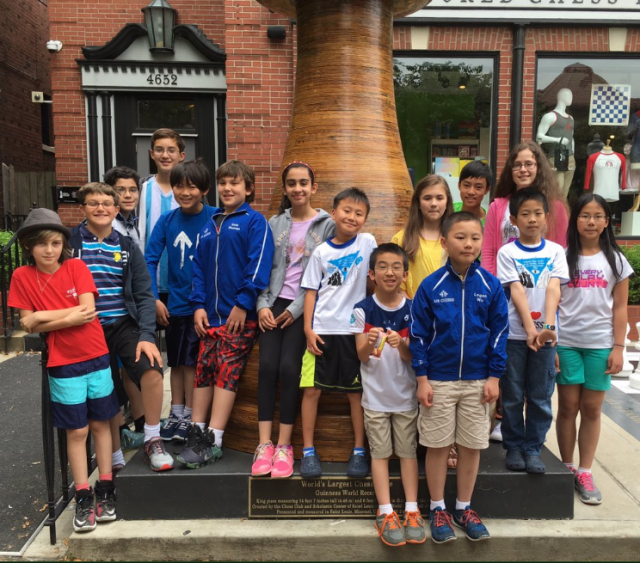 Today was my first day at camp.  The club blew my mind. There were huge screens projecting the latest top ICC games, there were wooden chess boards all over the place, and the club looked beautiful. Our teacher for the first day at camp was IM Armen Ambartsoumian, United States World Youth coach and former Armenian national team coach (you know, the country that almost always is at the top of the list in the Chess Olympiad). Our first lesson was on a very common opening that still confuses strong players as to why it is so sound, the Ragozin. Red flags are thrown up around the 5th move in some variations! [fen]r1bqk2r/ppp2ppp/2n1pn2/3p4/1bPP4/2N2N2/PPQ1PPPP/R1B1KB1R w KQkq - 0 6[/fen] 1.d4 Nf6 2.Nf3 d5 3.c4 e6 4.Nc3 Bb4 5.Qc2 Nc6 For anyone who knows the Queen’s Gambit Declined reasonably well, seeing someone put the knight on c6 makes them cringe. The plan would be to put the knight on d7 and fianchetto the bishop with b6 bb7, then c5 comes and you fight for the center. Nevertheless, this opening has proven its soundness among the top players in the world. The main part of the lesson, though, was not the opening, it was the importance of knowing the transpositions in your opening. You could memorize all the lines in the world and not know how to play the middle and end game with them and you would lose every time. Here is an example from a variation in the Slav. 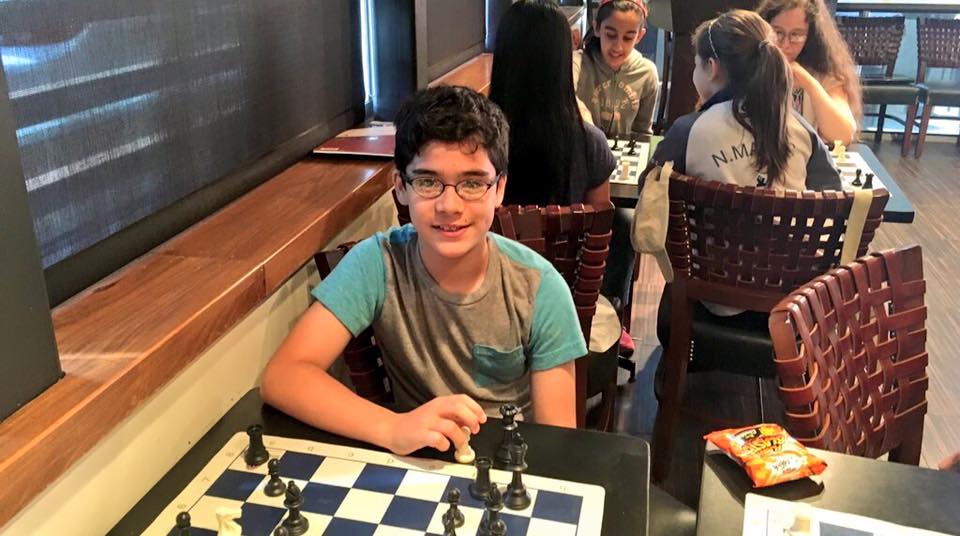 Akira
After our lecture, our second teacher for the day, IM Greg Shahade gave us a test. Greg is a great teacher, and he is also the founder of the U.S. Chess League.  This brought back good memories for me since our team Manhattan Applesauce won the U.S. Chess League championship this year. The test was designed to test our intuition. With only 45 seconds for each of the thirty problems, you had to use your intuition. The test consisted of some tactical problems, but to my surprise and delight, most of the problems were positional (for example, prophylaxis, weak squares, improving your worst piece, trading pieces). One of my favorite problems from the test is very hard to see if you do not know the game, but it has a brilliant answer. [fen]2r2rk1/1bpR1p2/1pq1pQp1/p3P2p/P1PR3P/5N2/2P2PPK/8 w - - 0 32[/fen]

The first day wasn’t all tests and lectures though. Greg and Aviv also organized a bullet tournament with us. Slowly the players went from fifteen all the way down to two: it was Aydin Turgit vs Nico Chasin. The game was very tense, but at the end Aydin pulled off the win in a rook endgame with his two rooks on the second rank.

Our teacher for today was again Armen, but today we were taught about a very interesting line in the Slav. The line is a forced transposition into an endgame. That is crucial because if you know the ideas in the endgame, the line could serve you well (I showed the position in Day 1, Harikrishna-Vescovi). Another example of the importance of knowing your opening’s ideas all the way to the endgame is evident in the game Navara-Jobava. Along with the lecture, we also had a field trip to the Chess Hall of Fame! I thought we were going to have to take a bus for an hour to get there, but it turned out that the Hall of Fame was just across the street. In front of the door there was a huge chess set that I played on for some time, but then we went in the building and took a tour of the museum. 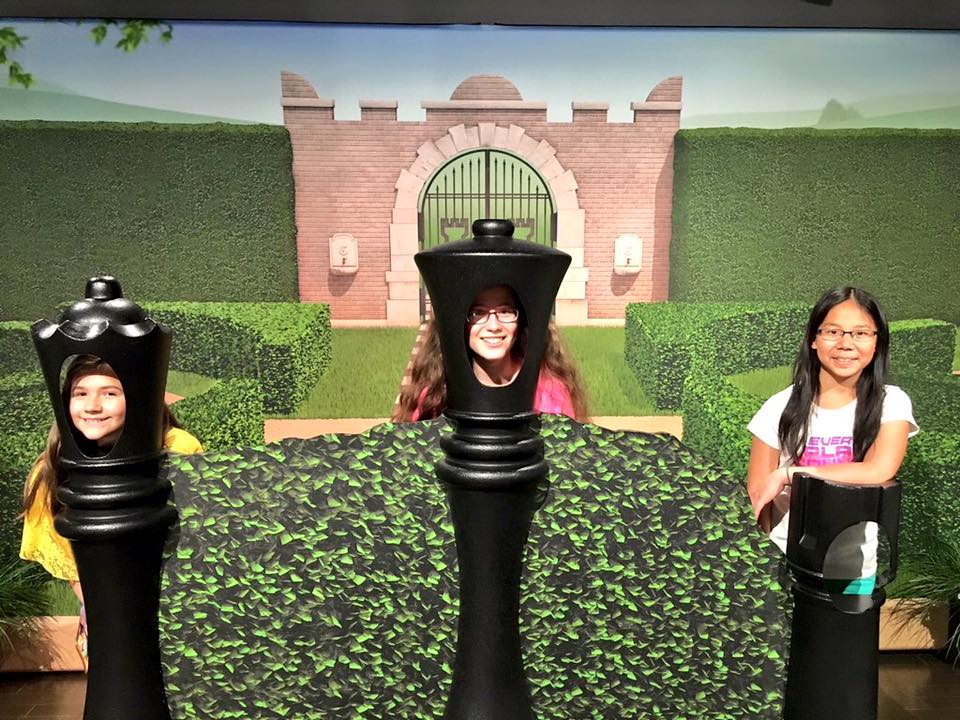 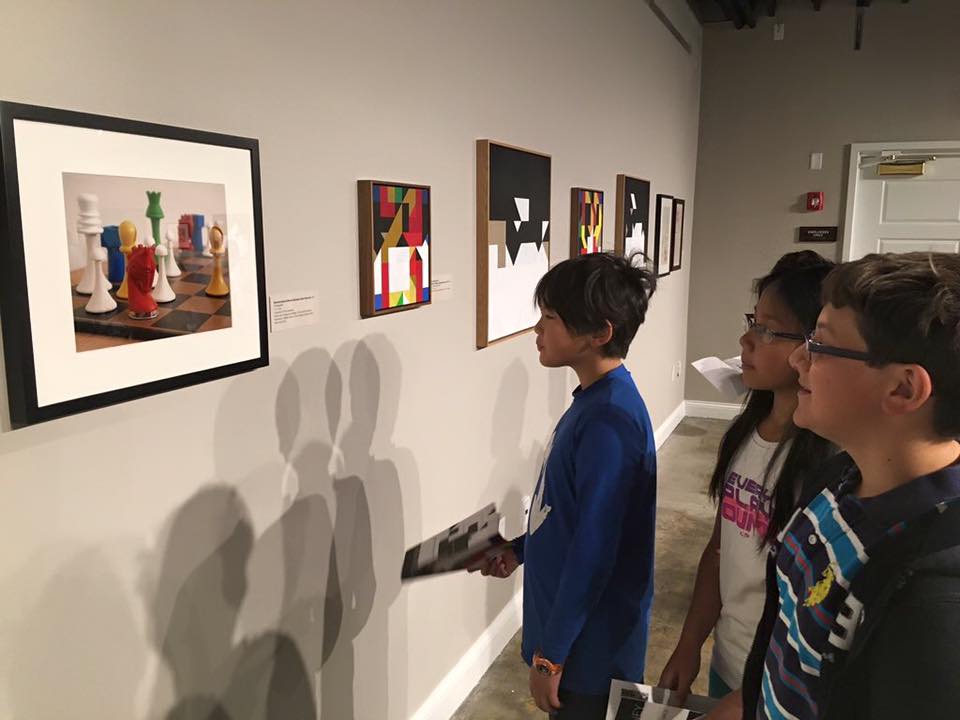 I had a blast that day but you can’t relax forever, you have to buckle down and learn. Once we came back to the camp, Aviv, who thought that Greg should have a taste of his own medicine (just kidding) had made another test for us. This test was much more tactical than Greg’s test was. The last part of the day was the start of the blitz tournament.

We started off the day by talking a bit about ourselves and our chess. Greg gave us each six questions to answer on that topic. Some of them were, “What openings give you the most trouble?” “What do you do for your chess?” Or rather, “What do your parents do for your chess?” There was also, “What are your strengths and weaknesses?” This was a really interesting session.  I knew most of these kids from World Youth and from other big tournaments, but I never got a chance to hear them talk about their strengths and weaknesses and how they study. In a way it was also very motivating for me. To hear that all of these kids are working so hard to get better made me want to work harder as well. After our conversation Greg gave us another intuition test like his other one. Here is one problem that I should have gotten right (hint: superfluous knights, knights that double each other). [fen]r3k2r/pp1q1p1p/3pp1p1/2pP1n2/2Pn4/2N2NP1/PP2PP1P/1R1Q1RK1 w kq - 0 1[/fen]

Show Solution At the end of the camp, we finally got to finish the blitz tournament that took too long before the break. When it was time for the championship game we all crowded around the board: it was Wesley Wang vs the winner of the bullet, Aydin Turgit. The game started and it was crazy; Wesley sacked his rook early on in the game for an attack and made Aydin spend much of his valuable three minutes thinking about his defense. Early on it looked like Wesley might checkmate Aydin, but Aydin played a very tricky combination and traded queens, stopping Wesley’s attack. I was almost certain Aydin would win, but with his dwindling time, Aydin blundered and Wesley won in a completely drawn position. The ice was broken by a handshake and everyone sighed. All the tension was gone, and now it was time for some fun.

Earlier that day, Greg had scheduled a pool party. We had a blast at the pool playing a bunch of pool games like Sharks and Minnows, and Marco Polo. Here is a photo from the pool. 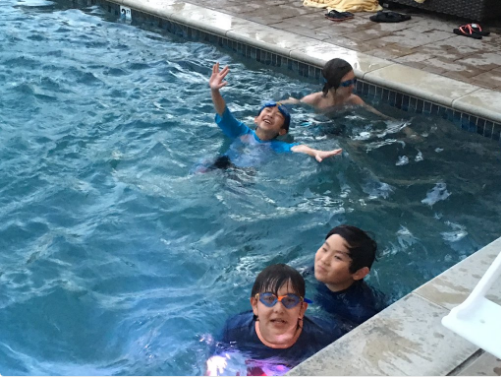 On the Official U.S. Chess School Twitter, you can find more videos and information about the camp.

Today was the last day of camp and I had to leave early because I had school the next day. I had one last lesson from Armen, and he decided that he would give us an intuition test. This one was very different. We had one minute to solve each of the ten problems and then after we wrote our answers, we would have an additional five minutes to calculate lines and write another answer. This test would help us see if we should trust our intuition, or if we should calculate further to find the best move. 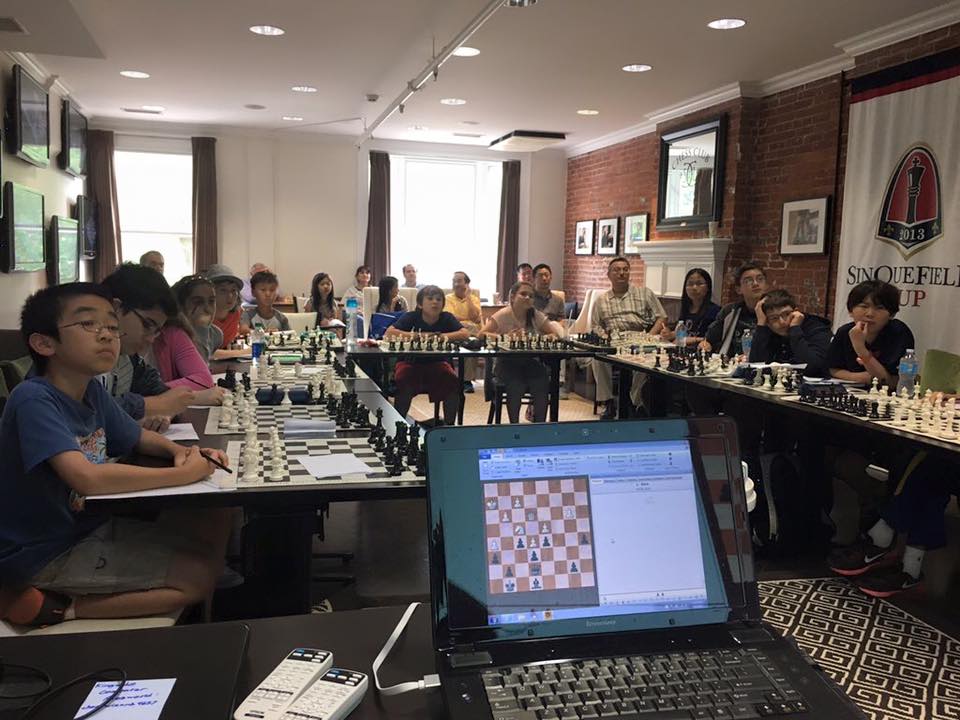 The last stop of the camp was the downstairs area. That is where all of the filming is done, where GM Maurice Ashley does his interviews, and where Jennifer Shahade and Yasser Seirawan commentate on the games in progress. There is even the famous brown couch that you see on TV (although it looks more comfy on TV). The best part of the trip downstairs was getting to film our own analysis of a made up game live from the Saint Louis Chess Club. If you want to check out the video, it is on U.S Chess School’s twitter. As it turned out, our flight got delayed 4 hours! We could have stayed for the simul and finished camp if we had known that. As we waited, about two hours later, the Shumans came to the airport and saw us at the gate. Nate and I played around for I while.  Then more people came -- it was Evelyn Zhou and Nastassja Matus. I guess I was still in St. Louis. We played bughouse for a while and then our gate started handing out pizza since the plane was so delayed! My mom and I then got on our flight and at 2:00 in the morning got home.

Special thanks to the Schein-Friedman Foundation, the U.S Chess School, the St. Louis Chess Club, Greg, Aviv, Armen, and everyone that worked to enable us to stay at this wonderful hotel, use this incredible chess club, and have this amazing camp free of charge. Thank you. 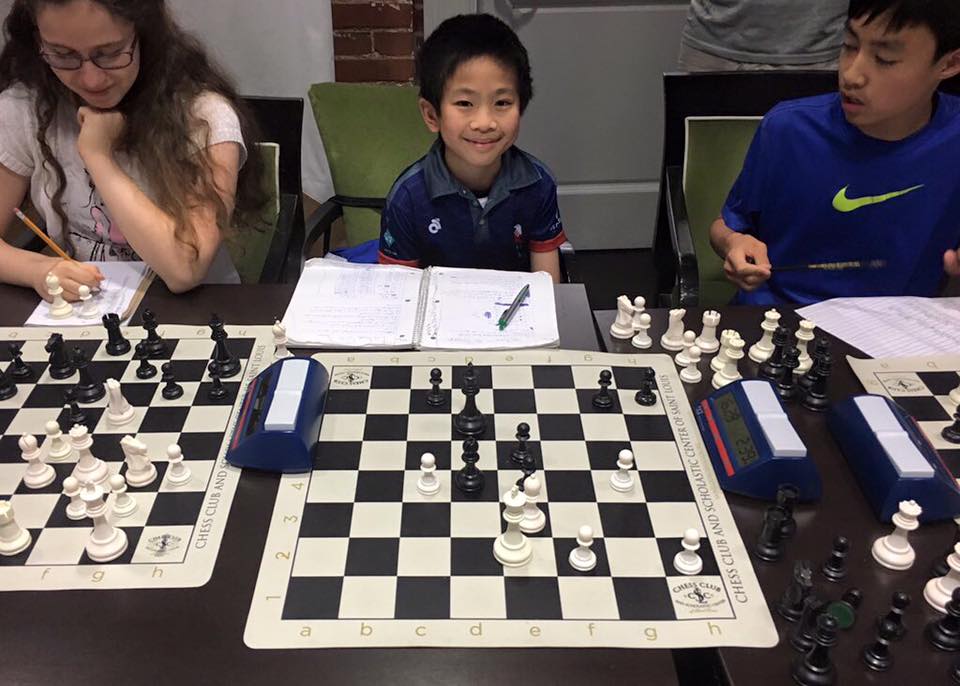