Morris-Suzuki Triumphs in Chicago: "I Enjoyed the Friendly Environment" 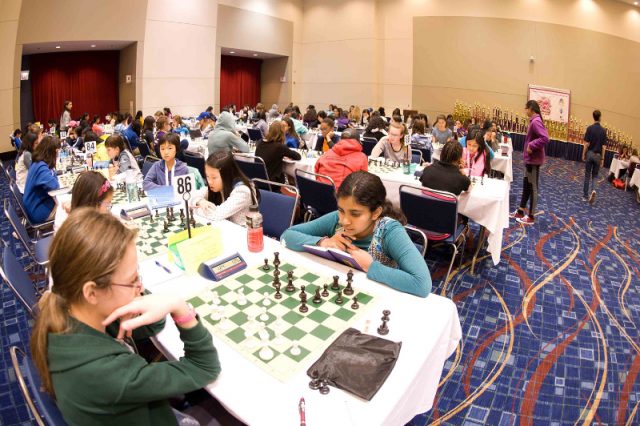 2017 All Girls Nationals, Photo Betsy Dynako Zacate
Before the first pawn was pushed, the All Girls National Championship was electric, thanks to a lightning strike. The 14th year of the annual event had a record number of players registered, but when lightning struck a plane in New York, players from multiple states found themselves stuck in airports begging to be on the next flight to Chicago. 30 players had to return home and miss this year. In spite of that disappointment, other players who had their travel plans canceled managed to find their way to the tournament. David Heiser, of Renaissance Knights explained, “People got here any way they could, by planes, trains, and automobiles,” he paused, “and buses.” The drive to arrive was only a hint at the determination the young women showed off during their games. In the U8 section, Abbie Wu of Oregon, the top rated player in the section, had a bad start.  This left an opening for Alice Lee of Minnesota, to take first place with a perfect score. 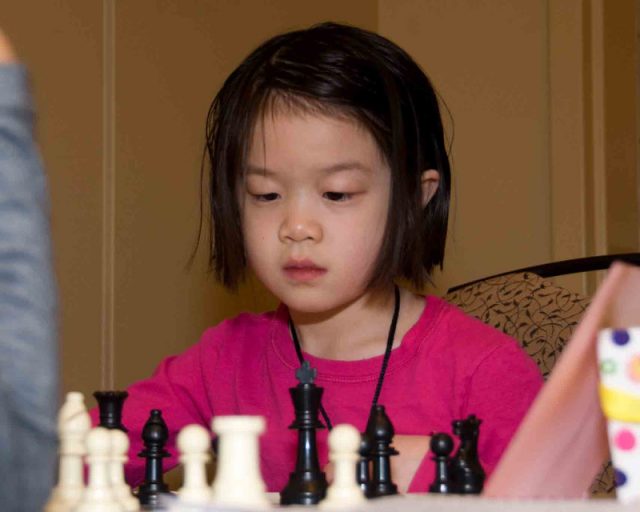 Alice Lee, Photo Betsy Dynako-Zacate
The next perfect score was posted in the U10 section by Californian Rui Yang Yan. In the U12 section, Veronika Vancsa, KS was the only player who still had a shot at a sweep going into the last round. She was paired with Annapoo Meiyappan of California, rated 200 points higher. Vancsa manage a draw. This gave her first place with a half-point over the rest of the field. 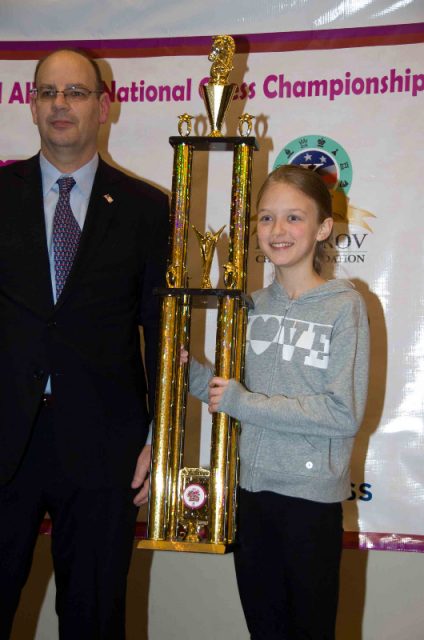 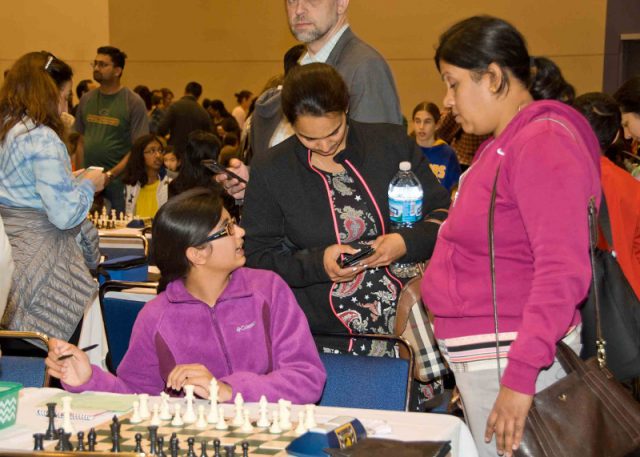 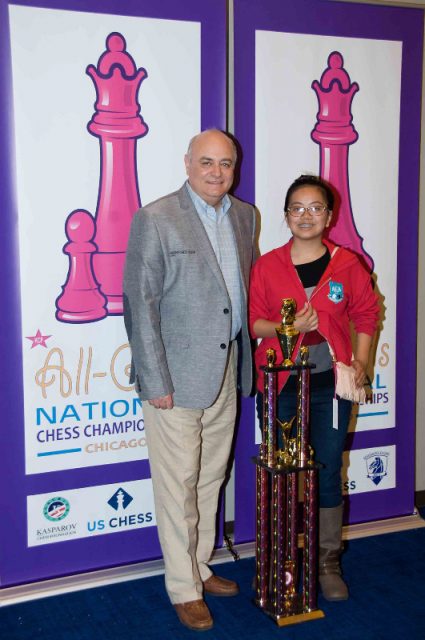 Julia Sevilla with Michael Khodarkovsky of KCF. Photo Betsy Dynako-Zacate
The U18 Section hosted nine players rated over 2000. Thalia Cervantes of Missouri, last year’s U16 Champion was considered one to watch. Yet the crowd favorite was still Wisconsin native, Anupama Rajendra, a multiple U18 Championship title holder. She is the youngest to hold the title, winning at age 11 in 2013 and again just last year. 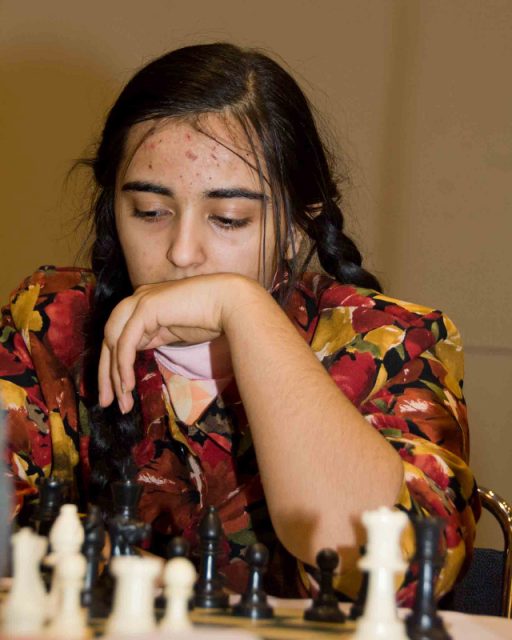 Anupama Rajendra, Photo Betsy Dynako Zacate
Another face known to the All Girls’ was regular Nastassja Matus of Minnesota. During the closing round on night two Matus was paired against Rajendra. Matus won the match pushing Rajendra out of title range. During the same round a newcomer to the tournament, Sophia Morris-Suzuki, a New Yorker who was able to make it to Chicago, beat another important contender: The final round was a show down between Cervantes with 4.5 points and Miranda Liu of Illinois who now trailed by half a point on board one and Morris-Suzuki and Matus on board two both with 4 points.  Liu and Morris-Suzuki both won their games leaving them tied for first place. The tie breaks set Morris-Suzuki home with the first place trophy and her place in history. She told US Chess, "I really enjoyed the friendly environment -All-Girls Nationals is a really good place to meet other female chess players around the country - last year, I went to the All-Girls Nationals for the first time and I met so many new people." 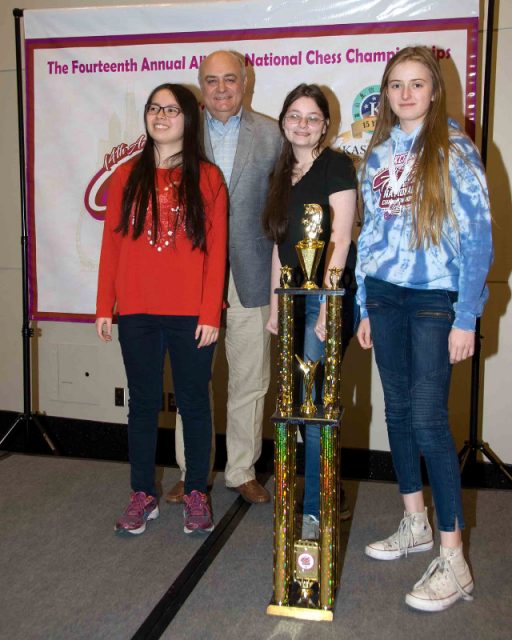 Stuyvesant High School, led by Under 18 champ Sophie Morris-Suzuki, took down the Under 18 team competition
Sophie also sent two key victories from her tournament. In the team awards, New York had a great showing despite travel delays, winning the Under 8 (Chelsea Prep), Under 12 (Dalton), Under 14 (IS 318) and Under 18 (Stuyvesant) sections. As always, the team spirit and friendly faces made this a memorable event to photograph. 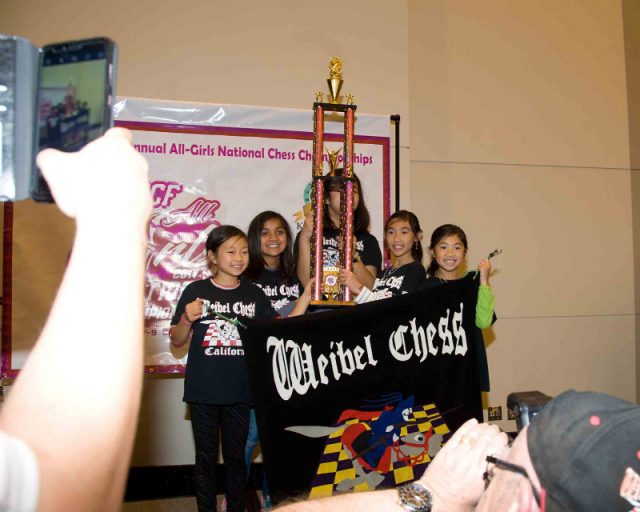 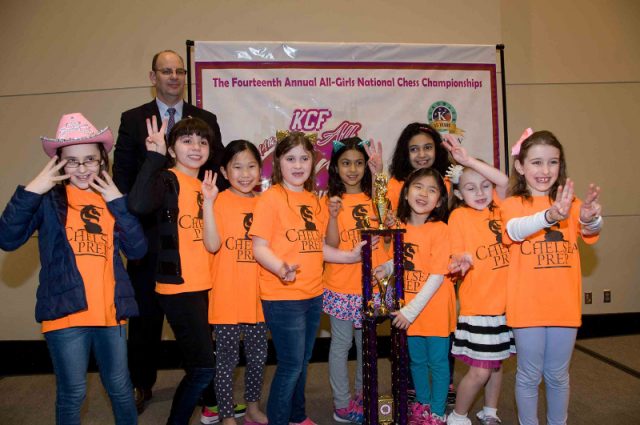 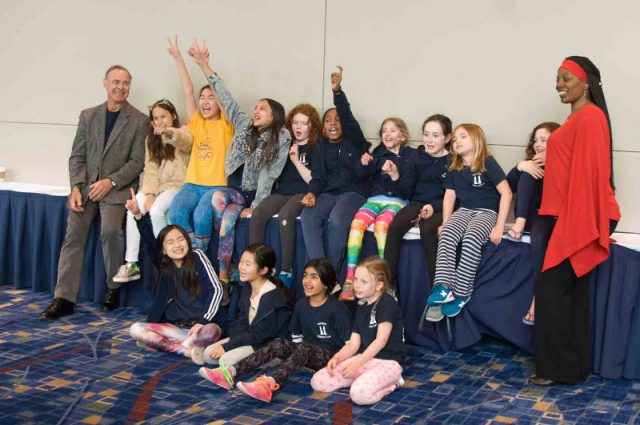 Top Under 14 team, Dalton
With another in the books it is time to look ahead to 2018. It will be the 15th year of the annual event, a great milestone worth celebrating. Plans are already afoot to make it the most memorable year so far. Find full 2017 standings here.
SHARE: