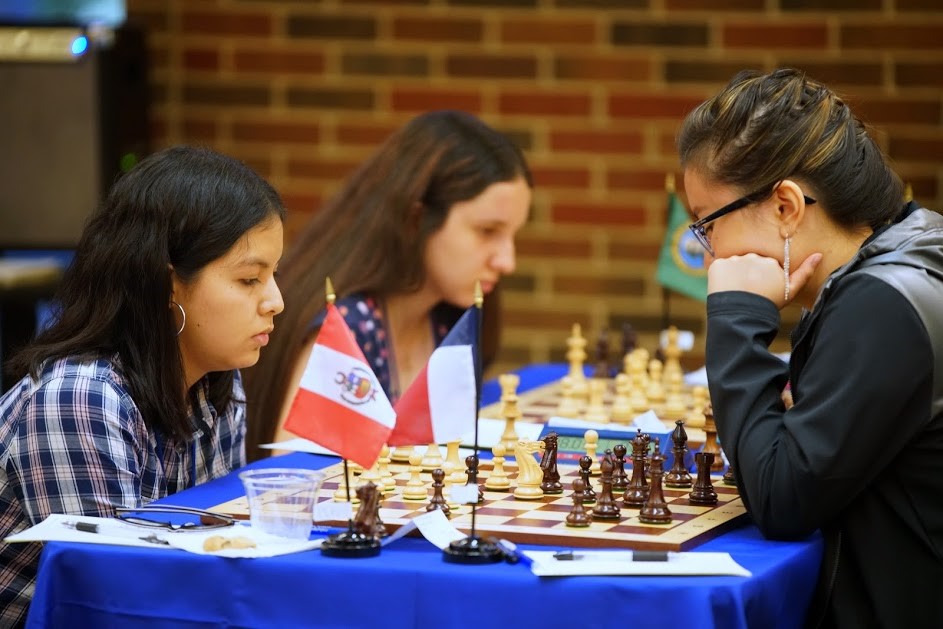 WIM Mitzy Caballero (left) faces WIM Emily Nguyen (TX) in crucial round 6 encounter from the 16th SPFGI June 27, 2019 in St. Louis. WFM Anne-Marie Velea of Washington, on board 2 in the background (photo courtesy of SPF).
Mitzy Caballero of Peru is the winner of the 16th Annual Susan Polgar Foundation Girls’ Invitational held June 22-27 on the campus of Webster University in St. Louis, Missouri. She compiled 5 1/2 points in the six-round tournament, finishing a half point ahead of three other contenders: Arya Kumar of North Carolina, Anne-Marie Velea of Washington, and Zoey Tang of Oregon. Caballero defeated Emily Nguyen of Texas in an exciting final round battle to take the championship. More photos from the 16th SPFGI are located here. Eleven different countries were represented in this years’ event including the United States, with participants from 38 states plus the District of Columbia. The girls competed for $320,000 in scholarships and cash prizes. The champion received a Webster University full tuition and fees scholarship worth approximately $28,500 per year for 4 years plus the Champion’s Cup and a special SPICE training package valued at $4,000. The second, third and fourth place finishers each received a Webster University partial scholarship worth approximately $18,000 per year for four years plus a trophy and $1,170 cash prize. Top under-13 winner for the second year in a row was Zoey Tang of Oregon ($500). Top under 10 was $500 Alice Lee of Minnesota ($500). The youngest competitor this year was Sophie Xu from Indiana. The brilliancy prize of $100 was awarded to Martha Samadashvili of New York for her round 2 victory over Omya Vidyarthi. Upset prizes were awarded for each round. These were presented to Cassandra Roshu (OR), Kate Jiang (Canada), Ayleen Ramirez Toledo (Mexico), Hailey Holmquist (ME) and Viktorija Zilajeva (OK). The largest upset of the tournament was by Holmquist (656 points). Best dressed player recognition went to Zoey Tang. The best written essay about the SPFGI experience was submitted by Cassandra Roshu. Ashley Xing of VA was selected by her competitors for the Miss Congeniality award. Since 2003, the Susan Polgar Foundation, through its supporters, donors & partners, has awarded nearly six million dollars in scholarships & prizes. The blitz tournament ended in a three way tie between Emily Nguyen, Lucia Malan from Uruguay and Martha Samadashvili with 6 points out of 7. Puzzle solving was won by Iris Zhou of Missouri, with 20 out of 20, in 13 minutes and 24 seconds. Perfect scores in the puzzle solving contest were also achieved by also by Martha Samadashvili and Emily Nguyen. The Friends & Family side event was won by Daniel Herman, the brother of the state representative from Colorado. The 2019 SPFGI was directed by Chief Arbiter Judit Sztaray, assisted by Andrei Botez, Jack Scheible and Aiya Cancio. Dr. Martha Underwood, who retired as Chief Arbiter last year, served as honorary Chair of the event, organized for the 16th consecutive year by the Susan Polgar Foundation. Photos from the 16th SPFGI are located here. Further information: Frank Niro, fan3@cornell.edu, cell: 503-347-0750
SHARE: