Miniatures for the Holidays: December Check in the Mail 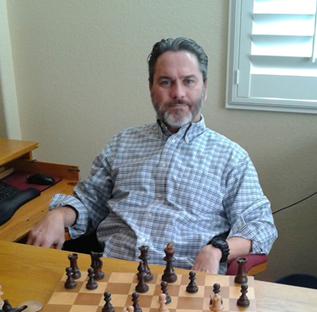 THOMAS WILLIAMS -- ICCM Thomas Williams grew up in a family of game players.  As a boy he would often play board and card games with his seven siblings, parents, cousins, and grandparents. As a teen he taught himself to play chess with a book of Morphy’s games. He graduated from the University of South Dakota with a degree in economics and became a banker, moved to California, married, and had two boys.   His responsibilities at work and home meant almost no time for OTB chess.  However, he found other ways to get his chess fix. Around 1984 he was given a Fidelity chess computer as a gift.  His chess hobby soon evolved from playing the game to an interest in how computers were changing the game. Thomas notes that some feel the game is less interesting as a result of computer advances.  He has accepted it as inevitable.   He admits to being obsessed with a “search for chess perfection” and notes that surely every chess player strives to play mistake-free chess. Correspondence and computer chess offers the best chance for mistake-free chess. He decided to enter some ICCF tournaments (since the US Chess Federation does not allow computer analysis) and has had considerable success.  He lists the reasons for that success: 1) being able to devote the time and effort 2) opening choices, with heavy use of databases and opening books 3) deep analysis of variations with heavy assistance from engines and 4) good positional instincts. GAME OF THE MONTH In this game our new International Correspondence Chess Master explains how he combines human brain cells with computer chips to produce a work of art. With a wide-open board it is now a fairly simple matter for White to force the exchange of Queens.  On Oct, 16, 2014,  Gilles resigned, graciously saying, "Well played!  You left me no chance after 13. b4!" CALL FOR ABSOLUTE PLAYERS Once again the year will be changing, this time to 2016 and the 2016 Absolute Championship will be forming.  If you are rated over 2200 CC, a USCF member, and would like to tangle with the strongest USCF correspondence players and their engines, please send in your name for possible inclusion in the 2016 Absolute Championship.  Entry is free. And if you would like to be a donor to the prize fund, please send your donation to USCF, Att:  Joan DuBois, PO Box 3967, Crossville, TN  38557, and clearly mark that it is for the 2016  Absolute Prize fund.. NOVEMBER RESULTS Walter Muir Richard Vandale  15W21  4-2 John Collins David Birozy         14C09  6-0 Thomas Buchanan 14C07  5-1 David McCann      14C08  5-1 Arthur Holmer          15C04  5-1 Frank Spooner       15C04  5-1 OBITUARY Gerald Sitter, Jr. born March 5, 1955, died October 19, 2015.  In the following game Gerald fights hard, but gives up too soon.   Lawrence Anderson, born 22 June, 1946, died 3 November, 2015.  Lawrence was from Rice Lake, Wisconsin.     AND NOW LET THE GAMES BEGIN…. The miniature games for 2015 Pins aren’t always what they seem.   The longer you look at Black’s final position, the worse it gets.   A neat cross pin does White in. After 15. f5 Black’s French Defense is crunched.   Black’s King Knight almost single-handedly does the job !   Kings aren’t safe in an open center.   Sometimes, after a brisk workout, the Queen is just too stuffed to move from h8.   A trap worth knowing in the Budapest   White’s Queen is the heroine of this piece.   The Knight on e4 is pinned.  So, by X-ray, is the Pawn on e7.  Mate ensues.   White shows that even Masters can be miniaturized
SHARE: