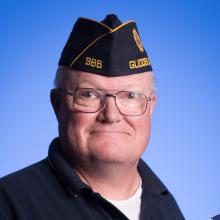 As of December 1, Michael (Mike) Buss is the new Correspondence Chess Coordinator, a contractor position within US Chess.  Mike, a decorated U.S. Navy veteran, brings a wealth of nonprofit and correspondence chess experience with him to this new position.

As of the November ratings supplement, Mike is the second-highest-rated correspondence (CC) player in the United States and has won the Golden Knights Championship multiple times. His most recent service to US Chess was as a member of the Correspondence Chess Working Group, which has greatly aided US Chess in re-thinking our engagement with CC play.

Boyd Reed, the US Chess Director of Events, adds, "I thank Chris Bird for his yeoman's work in taking over and organizing our correspondence chess delivery services after FM Alex Dunne's retirement. Chris did all of that work in addition to his FIDE Event Manager duties."

Mike can be reached at michael.buss@uschess.org.

Mike Buss was part of the “Fischer boom” of chess in the early 1970’s. Mike attended Iowa State University on a full-ride four-year Navy ROTC scholarship. He graduated in November 1978 with degrees in journalism and history and commissioned as an Ensign in the United States Navy, putting his chess playing days on hold.

From 1978 until 1993 Buss served on active duty in a variety of sea and shore assignments, as a Surface Warfare Officer, attaining the rank of lieutenant commander. His assignments included three surface ships, assistant professor of Naval Science at the University of Nebraska-Lincoln Naval ROTC unit, and two assignments with Fleet Marine Force units. He transitioned to the Naval Reserve force in 1993, where he served an additional eleven years. Mike is the recipient of numerous awards to include the Meritorious Service Medal, Navy Commendation Medal, Navy Expeditionary Medal, Humanitarian Service Medal, the Saint Barbara Field Artillery Association Medal, and other unit and personal awards and decorations.

During the summer of 1984, he came across Walter Tevis’ novel The Queen’s Gambit. His interest in chess reinvigorated! But it would have to be correspondence chess to accommodate the demands of the Navy and a young family. Re-joining US Chess, entering some postal chess “Class” and “Prize” tournaments, his game was steadily improving. Buss entered the Golden Knights tournament in the late 1980’s. He has won the Golden Knights championship three times, 2006 (co-champion with James Trascz), 2010 and 2012. He has also competed in the Electronic Knights, with top-ten finishes.

In 1995 Mike began a 24 - year career at The American Legion National Headquarters in Indianapolis, Indiana serving as an Assistant Director and Deputy Director of Youth Programs. He oversaw the Legion’s constitutional speech contest, its involvement with Scouting, and an air rifle marksmanship and gun safety program. From 2010 until his retirement at the end of 2017, Mike managed the American Legion Boys State and Boys Nation programs and American Legion Baseball. Throughout his 24 years he also managed the Legion’s flag education programs, where he was recognized as the Legion’s “flag guru” answering numerous questions on how to properly display and honor the United States flag.

Mike stays busy during his retired days. He is a long serving lector and minister of Holy Communion for St Monica Catholic Church. He also works part-time as a patient transportation driver for a major cataract surgery center in Indianapolis.

Mike and his wife of 41 years, Marie, are the proud parents of four children, sixteen grandchildren and seven great grandchildren.