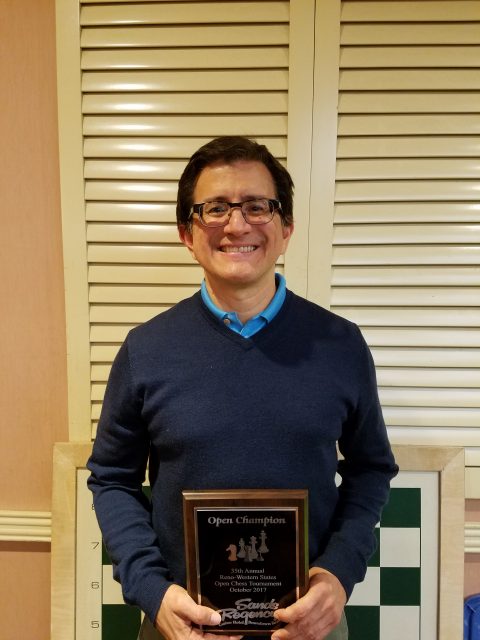 GM Carlos Matamoros
If it’s mid-October in Reno, it’s not only National Chess Day, but time for the Western States Open at the Sands Regency Hotel. This year marked the 35th WSO, with 208 players (the most since 2013) turning out. The clear winner of the Open section was GM Carlos Matamoros of Ecuador with a 5-1 score, earning $2000. Leading the field by a full point, he needed only a draw, and secured it in an interesting fashion. This unusual King’s Indian variation is double-edged, not something that a tournament leader would choose in every case! White erred on the 14th move (14.f4 should be good for an advantage) and immediately realized that he had allowed perpetual check. The players agreed to a draw in view of a forced line: 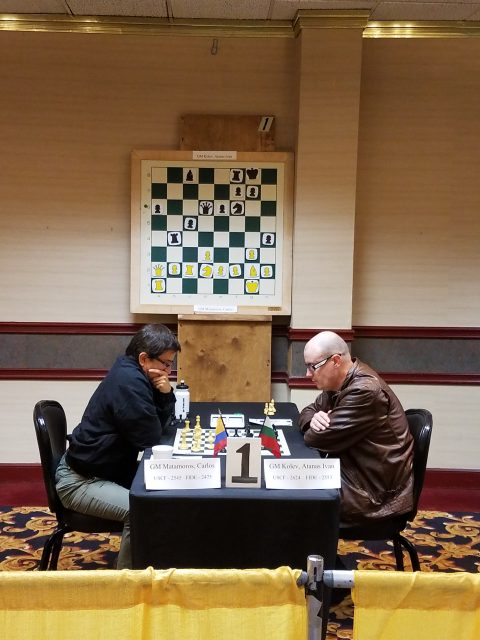 Matamoros v Kolev
Matamoros, 50, has been in the US for the last five years, recently moving from Arizona to Northern California where his wife, WIM Paloma Gutierrez, teaches at US Davis. (Paloma was unable to play because of her work, but she was present for the last several rounds, rooting Carlos home.) He drew top seed GM Atanas Kolev in Round 3, but the game that put him in the driver’s seat was his fifth round crush of third-seeded IM John Daniel Bryant. Bryant adopted a “triangle” formation in a Slav, and played very sharply, losing a pawn. 15…Nf6 looks like the best defense against White’s threatening bishops; in the game continuation he regained the pawn at the cost of allowing a powerful queen/bishop battery…followed by a threat to place the queen in front of the other bishop! 18…Nf6 19.Bxf6 Qxf6 20.Qe8+ Bf8 21.Ne5 wouldn’t have been any better, and the White pieces crashed through. Kolev tied for second at 4½ with GM Enrico Sevillano. Kolev, 50, plays for Bulgaria but is living in Las Vegas with his wife. Draws with Matamoros, Sevillano, and IM Omar Cartagena took him out of the running for first, but he outplayed FM Eugene Yanayt to get into the second place tie. In something of a King’s Indian/Trompvsky hybrid, Kolev played sharply – but not too much so. (In a game M. Rodriguez – Hebden, 2005, White lost after 12.0-0-0 b5.) The White pawn on e6 meant that Rd7 was always in the air, and eventually Black cracked under the pressure. At 49, Sevillano was the “young guy” among the top three. He started off with a draw against veteran FM Steve Greanias, but came back to draw with Kolev and Moradiabadi. In something of a break, he was paired with young Alex Kolay (the 29th seed, he had beaten number 12 and drawn with 11) in the finale. Black’s treatment of a QGD Exchange variation encourages White aggression (hanging center pawns), and then Enrico steers into an ending in which his queenside majority prevails over White’s protected passed d-pawn. Note that 19.Rxf4 would lose to 19…Bxe2, and how 25…Nd7 forces White to place his knight away from the action. Moradiabadi, a recent immigrant from Iran who lives in North Carolina, had an interesting draw with Bryant in the fifth round. Out of a quiet Catalan, Black redeployed his bishop to the kingside, after which he computer prefers 20.dxe5 Nxe5 21.Bb2 with advantage. Nor does the silicon beast care for 22…exd4, but the provocative 23…Ng4 elicited a mistake by White.  24.b4 or 24.Nf3 appear far preferable to 24.h3?, which allows Bryant to carry out his imaginative plan. After White stubbornly takes the Nc5 (26.Bf1 appears better), White’s king finds itself in a bishops crossfire. 32.Kd1 looks like another defensive error; 32.Be5 Rxe5+ 33.Nxe5 Qxe5+ 34.Kd1 seems preferable. 38…Qf2 improves (both players were presumably in time pressure). And Black’s 39th is a case of right piece, wrong square (39…Re8 leaves good winning chances). With the wandering monarch finally safe on the fourth rank, a draw was agreed. Despite the ultimate dominance of age and experience at the top, two Northern California youngsters made their presence known with early upsets of veteran IMs. Fourteen-year-old FM Josiah Stearman took down Vince McCambridge with an attack that attracted a crowd of spectators. My thanks to Vince for graciously providing comments.  In an unusual variation of the English (though Anand recently also played 6…h5), White trades off his fianchettoed bishop in search of a favorable ending after 11…dxe5 12.Qxd8+. Stearman is having none of it, and sacs a knight to expose the enemy king, though White should be able to defend and keep some advantage. 13.Ng3 improves, when 13…Qg5 is met with the counterattack 14.Qf3. And 13…Bg4 looks like a better bet than the immediate rook lift. In the game, 14.Qf3 would improve. McCambridge admits to having underestimated 17…Bg4, when after 18.f3 the bishop lurking on a7 will spring to life. 18.Qc2 would have been White’s last chance, when 18…Qxf4 is met by 19.Qxg6, and after 18…Bxg2 comes 19.Nxg2 dxe5 20.b4 Rb8 21.a3 h4 22.Kh1 Qg3 23.c5 Qh3+ 24.Kg1 with a likely draw. Of 18…Qxf4!! McCambridge notes, “I did not see this. Brilliant play reminiscent of Morphy!”  23.Kg1 expedited the inevitable execution. In the same round IM Tim Taylor brought out the venerable Colle System but fell victim to 13-year-old Anaiy Somolwar. In an approximately even position, 18. Qe1 allows Black to draw a bead on the White king’s position (18…Qc8 would have done this also). Black pulls the trigger prematurely, though (20…Bb6 or 20…b6 are fine), but White fails to grab the opportunity: 21.gxf3 Qxf3 22.Qd1. In the game continuation,  24.Nd4 Bxg3 25.fxg3 should be played. Of course 25.Bxe5 Qxh3 loses. White’s last chance for resistance was 26.Qe3. Returning to the prize winners in the Open, IM Cartagena and FM Alex Kretchetov split Under 2400 honors with 4 points, while the same score earned Ganesh Murugappan (only 2169) the Under 2300 prize. He beat IM Ed Formanek and drew IM Vladimir Mezentsev.  There were four GMs and six IMs in the Open. Michael Walder, 61, was the Expert section winner with 5½ points, and he has an inspiring story to tell. Diagnosed with inoperable stage 4 adenocarcinoma cancer in 2011, he was given less than a year to live. But after enduring debilitating treatment for three years, he was still alive and ready to return to tournament chess after an absence of 19 years. And another three years later, he’s playing a lot and in as good condition as one could hope for (cancer still in remission). Mike plays regularly at the storied Mechanics Institute chess room in San Francisco, and lives with three other chessplayers. 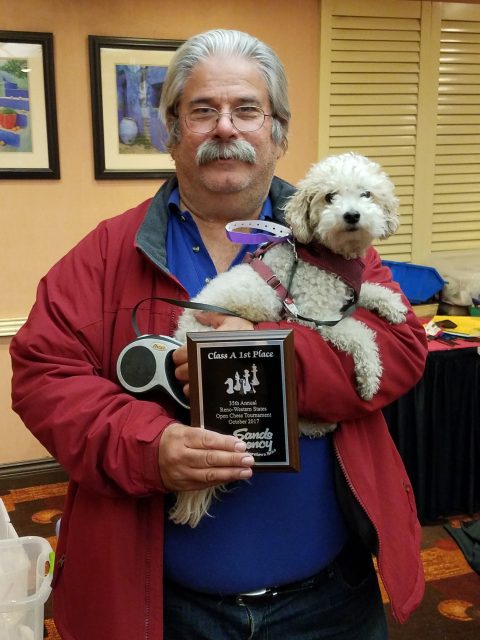 Top expert Michael Walder and Samantha
Mike was accompanied by his bichon poodle Samantha, and the plan was for her to stay in the hotel room while he was playing. Alas, the hotel had changed its policy and unaccompanied pets were no longer allowed in rooms. Mike played with Samantha (who is better behaved than most players) in his lap for two rounds, but then a prominent player complained that he was fearful that Samantha would suddenly bark (never mind her complete silence the first day, while cell phone ring tones were occasionally heard). Of course, parallels were drawn to Nimzovich’s legendary complaint about Lasker’s unlit cigar. With volunteer dog sitters and one game played in another room, Samantha muddled through and proudly joined Mike in his victory picture. Class A marked a rare victory for youth. Jaisuraj Kaleeswaran, 13, of Fremont in Northern California, went in as the 32nd seed but emerged on top with 5-1. He was a member of the Mission San Jose Elementary School team that won the K-6 Open section at the 2016 national scholastics. Jaisuraj expresses gratitude to his inspirational coach Joe Lonsdale. James Bennett, 65, from Sunnyvale in Northern California, won the overall Senior prize and tied for first B with Cailen Melville, 27, of San Francisco. Class C represented a case of clear senior dominance, as Alan Howe of San Jose tallied 5½ to take the laurels. And Class D winner Kauschik Ghosh, also from the South Bay, isn’t too much of a veteran (just four years of tournament play), but is old enough that his son was also playing in the tournament. Unrated honors went to Seth Garcia. East Bay Chess won the best club prize with 39 points after years of Mechanics Institute and Seattle Club dominance. The latter two trailed with 36½. IM Mezentsev topped the Blitz. 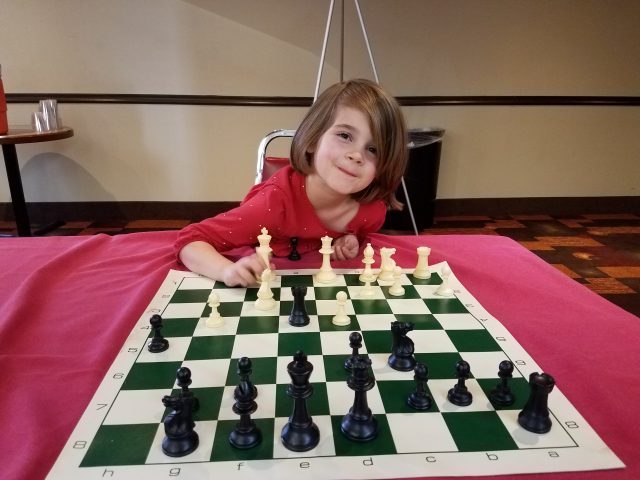 Reconstruct this!
A warning to those who play in a higher section for the experience. That’s a worthy objective, but enthusiasm should be tempered by the fact that you have a strong chance to get an unplayed round. Young Alan Hung, rated 1811, played up two sections. He got a bye in the first round (odd number, a 50% chance), and because of an abundance of draws in Round 1, found himself up against GM Matamoros, the middle player in the one point group! After losing that game and a couple more, he then got a forfeit from a player (2162) who took ill at the last minute, and then lost the final round. As always, Jerry and Fran Weikel and their helpers put on a great tournament, with the extras (coffee and morning snack, John Donaldson’s lectures, simuls by Donaldson and Moradiabadi, and readily visible demo boards) that Reno regulars expect. (We did miss GM Sergey Kudrin, a longtime regular participant who had to deal with a family health issue.) The prize fund totaled $19,700. Reno (which called itself “the biggest little city in the world” with a population of 32,000 when I visited with my family in the fifties, still has that sobriquet despite having grown about sevenfold) offers the beautiful Truckee River, good food and shows, some Western history, and yes, for those so inclined, gambling. The Larry Evans Memorial, in a similar format, will take place March 30 – April 1, 2018. Finally, since this writer’s oft-made plea to the class players for games or anecdotes elicited a reply this time, we close with a “find the move” position. Black, Class A player Charles Brunton, is down material but has a surprise for his opponent. Show Solution

ABOUT THE AUTHOR
Randy Hough has been a US Chess member since 1962 and is a former US Chess Master. He has written scores of articles for Chess Life Magazine and Chess Life Online, beginning in 1980.  Hough is a two-time winner of humor awards from Chess Journalists of America.  A National Tournament Director and International Arbiter, he worked in our office for three years, served six years on Executive Board, and is currently a member of Ethics, Bylaws, and Awards committees. He has received the Distinguished Service Award.
SHARE: