Watch Saint Louis Chess Club Executive Director Tony Rich interview"> our own Executive Director Carol Meyer as they reflect on the World Chess Hall of Fame exhibition, "US Chess: 80 Years—Promoting the Royal Game in America," which opened on March 6. The show is now in its final week and closes on October 27, 2019. "> 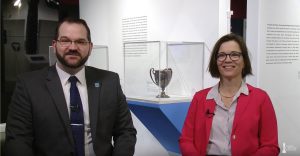 The video is part of the World Chess Hall of Fame's  "Masters of the Arts" video series. "US Chess: 80 Years—Promoting the Royal Game in America" celebrates the official governing body of American chess and its many accomplishments since its 1939 founding. The exhibition uses audio, video, photographs, and never-before-exhibited artifacts which illustrate US Chess’s mission to empower people, enrich lives, and enhance communities through chess.   #USChess80Years