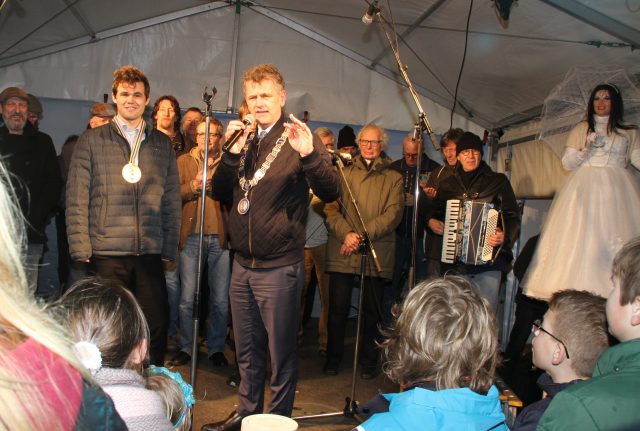 Photo Cathy Rogers
Transported through the streets to the village square, serenaded by the local steel workers’ choir, awarded a medal by the city mayor – isn’t this the dream of everyone who plays chess? Sunday January 28, 7.45pm 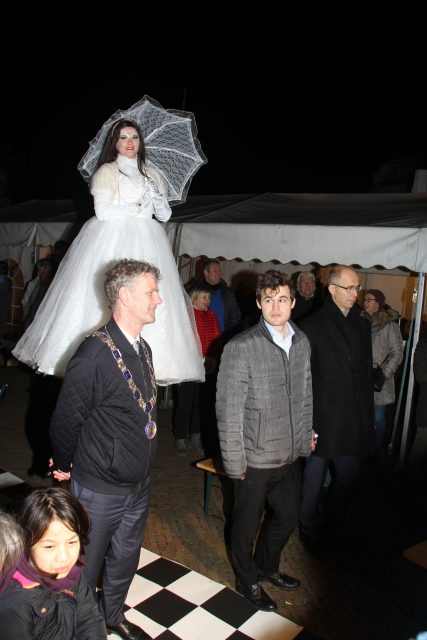 Photo Cathy Rogers
Alighting from his car, Magnus Carlsen is greeted by a 3-meter tall woman dressed in white who accompanies him to the stage on the edge of the square, Julianaplein, where the choir is about to begin their Song of the Year, ‘Wijk aan Zee!, Wijk aan Zee!’. To cheers, Carlsen is introduced to the audience and then the singing begins, tuneful and enthusiastic. The tradition of the village singing to the winner of the 80-year-old Wijk aan Zee winner goes back only as far as 2015. However the town has been involved in supporting the chess tournament for decades, most notably billeting hundreds of competitors with local families, a feature of the event which lasted until the 1980s. When the first song is concluded, the Mayor of Wijk aan Zee takes the stage – actually the Mayor of the larger town Beverwijk, but he receives only jeers from the crowd when he mentions this fact. The story of Carlsen’s success is told with the help of a Dutch-English translator app: how the Norwegian’s victory was known only after the final minute of the final game and the records Carlsen had broken. Carlsen is awarded a giant gold medal and the choir begins again – with an instrumental! This performance tells the story of the sounds at the steelworks which indicate imminent danger and the guitar, accordian and melodian, accompanied by female interloper on the rattle, create a haunting melody, interspersed with deep ‘Oof!’ sounds from the choir. Magnus is duly impressed. The performance – the final event in a street festival organized that day by the village for the thousand-plus chessplayers visiting Wijk aan Zee for the chess festival - is over in ten minutes but the crowd, including Carlsen and his father, walk away content. 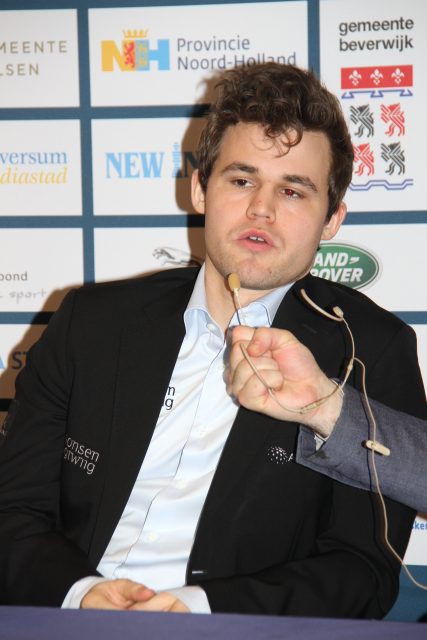 Magnus Carlsen, Photo Cathy Rogers
7.15pm Half an hour earlier, Carlsen was sitting at the winner’s press conference, accompanied by his vanquished tie-break rival Anish Giri, telling the assembled media about his path to a record-breaking sixth Wijk aan Zee victory. Inevitably, attention turns to Carlsen’s remarkable and tournament-defining game against England’s Gawain Jones; a game where Carlsen blundered a piece yet still won. Carlsen, reflecting on the Jones game, said “In a 13-round tournament, as long as you don’t lose you can [usually] get a streak going.” Indeed Carlsen’s streak took him to a tie for first with Giri and resulted in his first super-tournament victory since Bilbao 2016. “It’s a big deal to win after a year and a half,” said Carlsen. “It was a huge relief that I played decently here – apart from blundering a piece. You can only control your own destiny. Keeping a stable level is more of an indicator on how I am doing.” Giri, a long-time Twitter antagonist of the World Champion – and also one of the top players with the best score against the World Champion, could only admit that he was close but not close enough: “This was by far my best result - +5 is fantastic – but even in my best tournament I didn’t finish first. Magnus won it fair and square.” 6.45pm 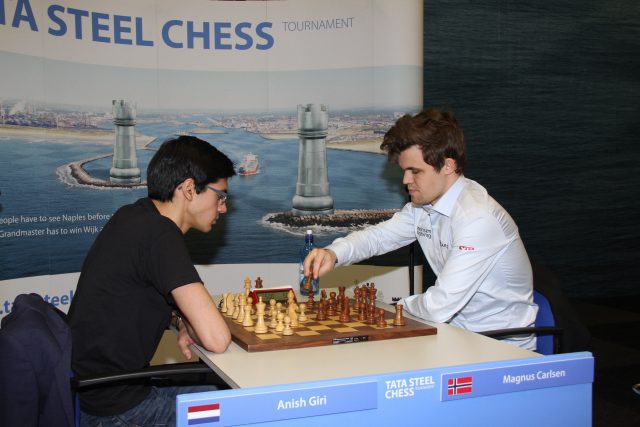 Giri vs. Carlsen, Photo Cathy Rogers
Half and hour earlier again and Carlsen, having smoothly won the first tie-breaking game, is under a fierce attack from Giri. Despite being past the official time for the start of the legendary closing ceremony – serving pea soup to both players and villagers – the crowds watching the game were eight-deep. Many were unable to stretch high enough to see the players and had to settle for watching the action on the many video screens. By winning this game, Carlsen had won a record sixth Wijk aan Zee title, secured the 10,000 Euro first prize – massively overshadowed, of course, by his appearance fee - and returned his rating closer to the stratospheric levels which had threatened a Carlsen era without rivals just a few years ago. Yet here was the home favorite Giri pushing Carlsen all the way to a tie-break, albeit one where the Norwegian was hot favorite, not having lost a rapid or blitz playoff for a decade. Sure, enough, soon after 6.45 the crowd were acclaiming Carlsen as the new Tata Steel Chess Champion, while secretly wishing that Giri had broken the long drought since Wijk aan Zee had seen a Dutch winner. Earlier in the day Neither Sergey Karjakin nor Wei Yi, playing against Carlsen and Giri respectively, wanted to be a hero in the final round and the two leaders were given no chance to win their final games. Long-time leader Mamedyarov could catch the leaders if he wore out Viswanthan Anand – not achieved – but the Azeri knew that even so, only Carlsen and Giri would be competing in the tiebreak match due to his loss to Giri. 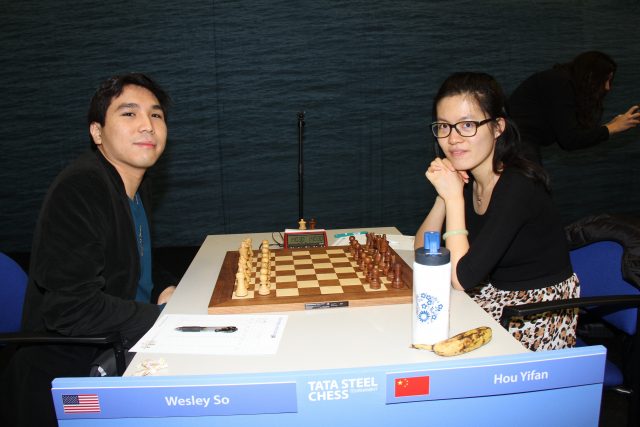 GMs Wesley So and Hou Yifan face off, Photo Cathy Rogers
Defending Champion Wesley So had the satisfaction of finishing the tournament on a high with a win against luckless back-marker Hou Yifan. After his loss to Carlsen in round 10, the US Champion finished the tournament with 2.5/3 to end just a point behind the joint winners. So’s  above par performance returned him to the world’s top 5 and ensured that he will be one the favorites at the upcoming Candidates tournament. In contrast, Fabiano Caruana had a disastrous tournament, losing in the penultimate round to Vladimir Kramnik to leave only Hou and Baskaran Adhiban behind him at the finish. In the process he dropped from world number two to world number eight with plenty to ponder as March’s Candidates tournament approaches. Nonetheless, Caruana still has his fans; Carlsen opining “You can’t completely disregard what happened here but he is still a force to be reckoned with and there is a lot of time to recover.” As usual, plenty of US players took part in the Wijk aan Zee festival, which features almost 150 separate, four to fourteen player, round-robin tournaments. 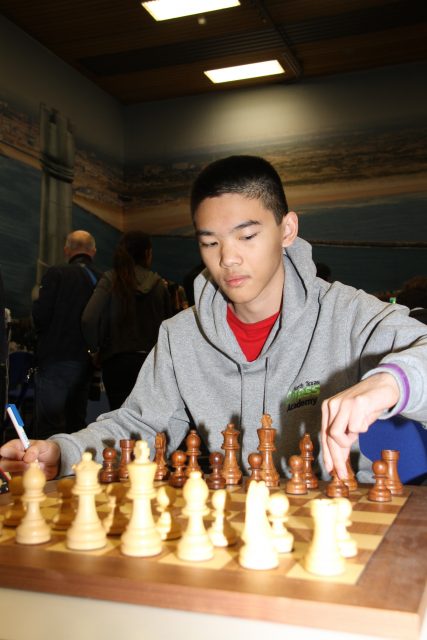 Jeffery Xiong, Photo Cathy Rogers
Jeffery Xiong tied for third place in the Challengers tournament, a point and a half behind winner Santosh Vidit, who thereby qualified for the top division in 2019. In the 7E division another US junior, Jonathan Chen, scored the only 9/9 score in this year’s festival. 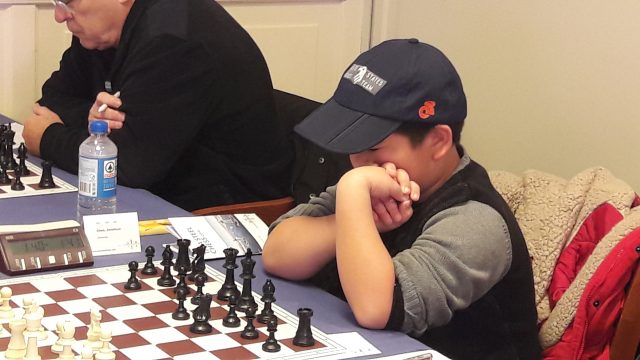 Jonathan Chen, Photo Thomas Richter
Earlier in the Week... https://new.uschess.org/news/americans-earth- shaking-wijk- aan-zee/ Find out more about GM Rogers' in his Best of US Chess Award and more information on Tata Steel Chess on the official site.
SHARE: