Final Update: (note updates are in reverse order) Awonder Liang has won the 2019 U.S. Junior Championship, earning a $6000 first place purse and a $10,000 scholarship to the college of his choice, courtesy of the Dewain Barber Foundation and US Chess. Carissa Yip is the 2019 Girls Champion, winning $3000 and also taking home a $10,000 scholarship from the Dewain Barber Foundation and US Chess. And finally, Alex Shabalov has won the inaugural Senior Championship. He walks away with a cool $12,000 first place prize. You can relive all the action at uschesschamps.com, and CLO will have a full report up here tomorrow. 5:40 Update: Liang wins the 2019 Junior and the $10,000 scholarship! 5:28pm Update: Checa is giving it his all in the second game, sacrificing the exchange with 25. Rxd5 exd5 26.Nd4! 5:12pm Update: Liang wins the first game with a sham rook sac that ends up winning the queen. Checa will have to win on demand to force the Armageddon game! 5:01pm Update: And we're off with the Checa-Liang playoff! 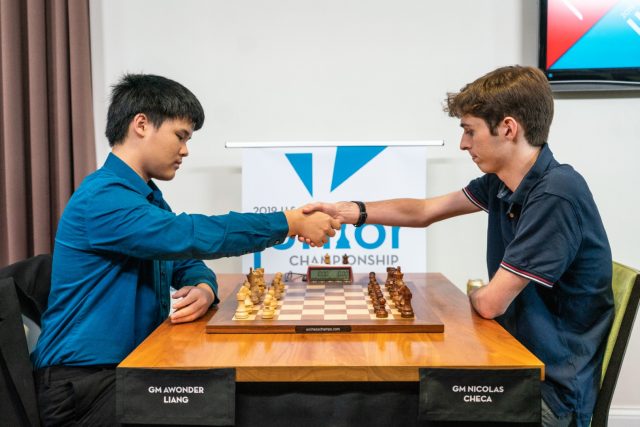 LIang-Checa start the playoff! (photo Eric Rosen)
Liang has White in the first game, and the game has moved into Winawer 4. e5 b6 waters. Saint Louis Chess Club founder Rex Sinquefield is parked in his usual spot here on the first floor of the Club, directly in front of the big screen that is showing the live broadcast. 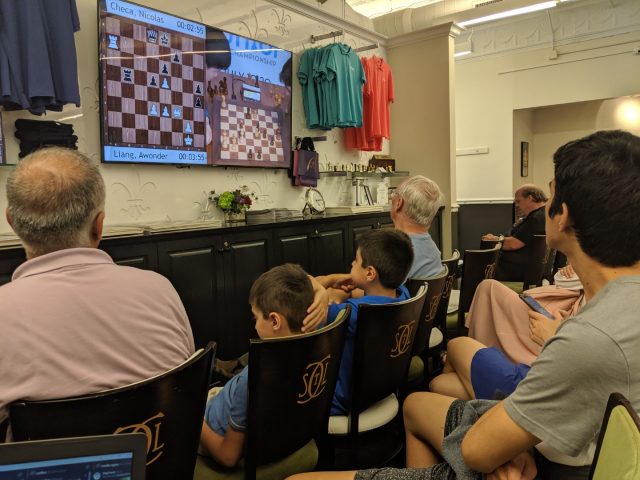 Also here: Veronika Zilajeva, Var Akobian, Jaan Ehlvest, and Alex Yermolinsky. (In order of proximity to Your Humble Writer.) 4:25pm Update: Zilajeva knows the right technique and has checkmated Rachael Li in 131 moves! 4:20pm Update: We're 40 minutes from the Checa-Liang playoff. Who will get first place and the $10,000 scholarship from the Dewain Barber Foundation and US Chess? Christiansen has just defeated Benjamin in a long, complex ending. The Zilajeva-Li game is the only one remaining, and Zilajeva is still trying to mate Li with knight and bishop against king. 3:20pm Update: Lots of results are in: In the Junior, Hilby defeated Vaidya, and Sheng won against Yu. Liang and Tang drew, as did Burke and Jacobson, and Niemann and Checa. Four games are over in the Girls: Samadashvili-Cervantes was drawn, as was Nguyen-Yip. Rochelle Wu defeated Maggie Feng, and Agata Bykovtsev took the full point against Rui Yang Yan. The Zilajeva-Li game is ongoing. Only Benjamin-Christiansen is still going in the Senior Championship. Shabalov drew with Ehlvest, as did Kaidanov and Fishbein. Max Dlugy continued his second-half rebirth with a win over Yermolinsky, while Goldin won his final round game against Novikov. 2:44pm Update: Carissa Yip drew her game against Emily Nguyen, making her the 2019 U.S. Girls Junior Champion and earning her a seat in the 2020 U.S. Women's Championship. She has also earned the $10,000 scholarship from the Dewain Barber Foundation and US Chess. Congratulations to Carissa! 2:36pm Update: Liang-Tang is drawn. Checa and Liang will contest a playoff at 5pm CDT! 2:07pm Update: Shabalov-Ehlvest is drawn, and my prediction has come true. Alex Shabalov is the 2019 U.S. Senior Champion! 2pm Update: Nicolas Checa has drawn with Hans Niemann, opening the door for Awonder Liang to capture the 2019 U.S Junior Championship with a win over Andrew Tang. Currently the Liang-Tang game is ongoing, with Black perhaps holding a slight edge in a complex position. If Liang and Tang draw, Checa will go to tiebreaks with Liang at 5pm CDT. Meanwhile, Carissa Yip is in a difficult position against Emily Nguyen. Yip leads the Girls field by a full point, but a loss to Nguyen would allow either Rochelle Wu or Rui Yang Yan to force a playoff for first place. Alex Shabalov, who also has a full point lead over the field in the Senior Championship, currently plays Jaan Ehlvest, and the game has a fairly balanced position on move 29. I would not be surprised if a draw occurs at or shortly after move 30.
SHARE: