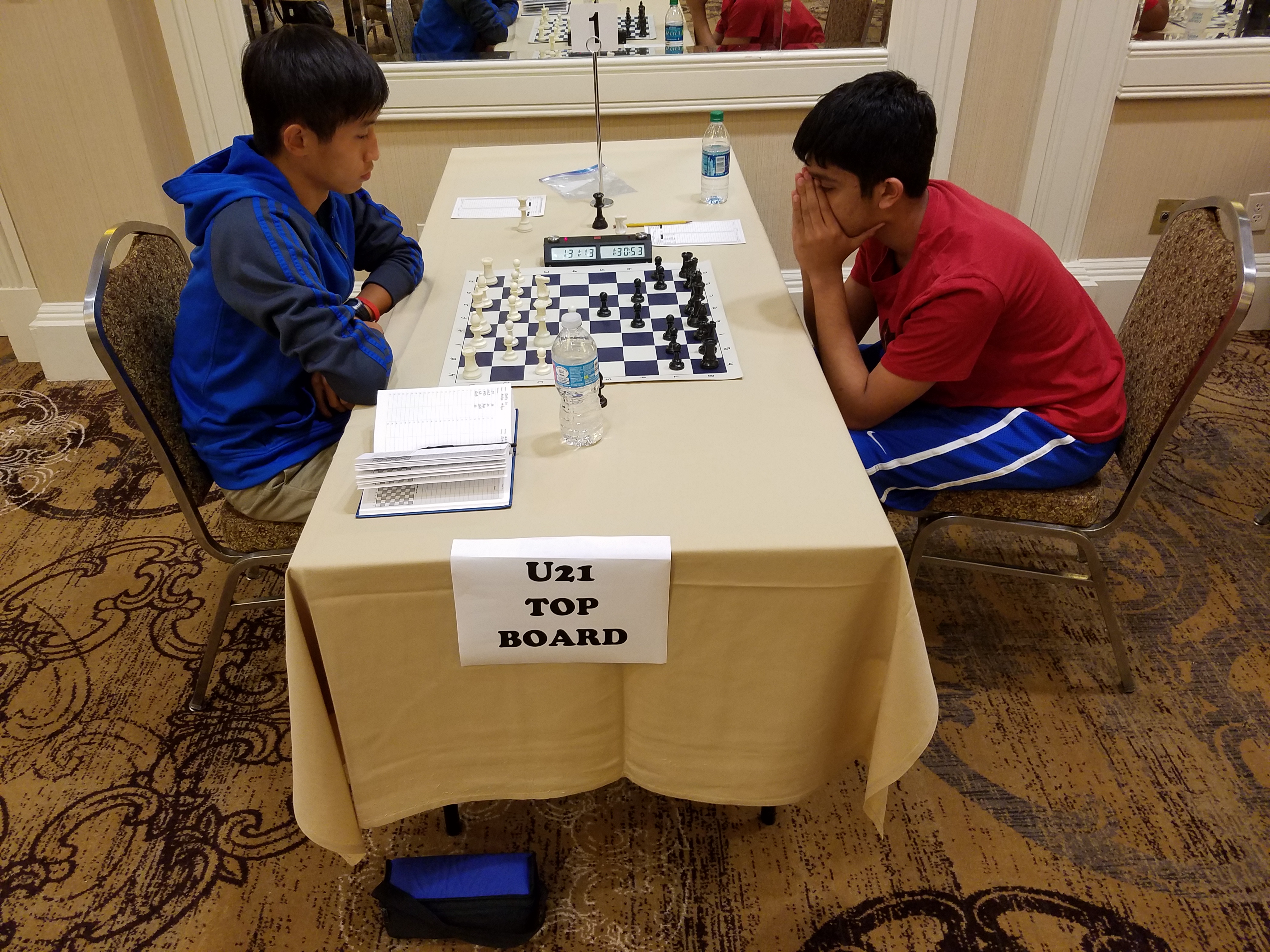 Bovey Liu-- Atulya Vaidya, Photo Brian Yang
The biggest battle at the Junior Open every year is for the coveted spot in the next year’s Junior Invitational Championship. And so it was at the Hilton in Kenner, Louisiana (a New Orleans suburb) June 17-19. Four masters had their sights set on the prize and other players dreamed of lightning striking (not so implausible, give the erratic weather conditions!). Second seed Michael Chen came from Michigan. The other three represented adjacent (but not necessarily close, what with the driving distances) Texas: Atulya Vaidya from Dallas and Bovey Liu and Justin Wang of Houston. Wang, who recently turned 11 and reached 2300, was the slight favorite. Liu and Wang met after sailing through the first two rounds. The result was a fairly quiet draw, but Liu had reason for optimism if the final result came down to tiebreak, as Wang had received a forfeit win in the first round. Vaidya meanwhile had given up two draws, while Chen had one. Liu’s key win came against Chen in Round 5, a testimonial to the power of opposite colored bishops in an attacking position. The opening was equal, but Black was a bit slow with counterplay (19…b4 improves), and 22…Kh7 would have held up White’s attack. When White finally recaptures on d4, another avenue for a possible lift of the Ra1 is opened. After 32.axb5, the light squared bishop and powerful queen and rook insure the win. Wang drew with Vaidya in the fifth round, leaving him a half point behind Liu. Confident of the tiebreak, Liu drew quickly with Vaidya (who trailed him by a point). Wang scored against Virginia Expert Isaac Steincamp, who defended well until he missed 28.Qd3. In the final position White either loses his Nd2 or trades it, setting up a crushing queen and bishop battery. 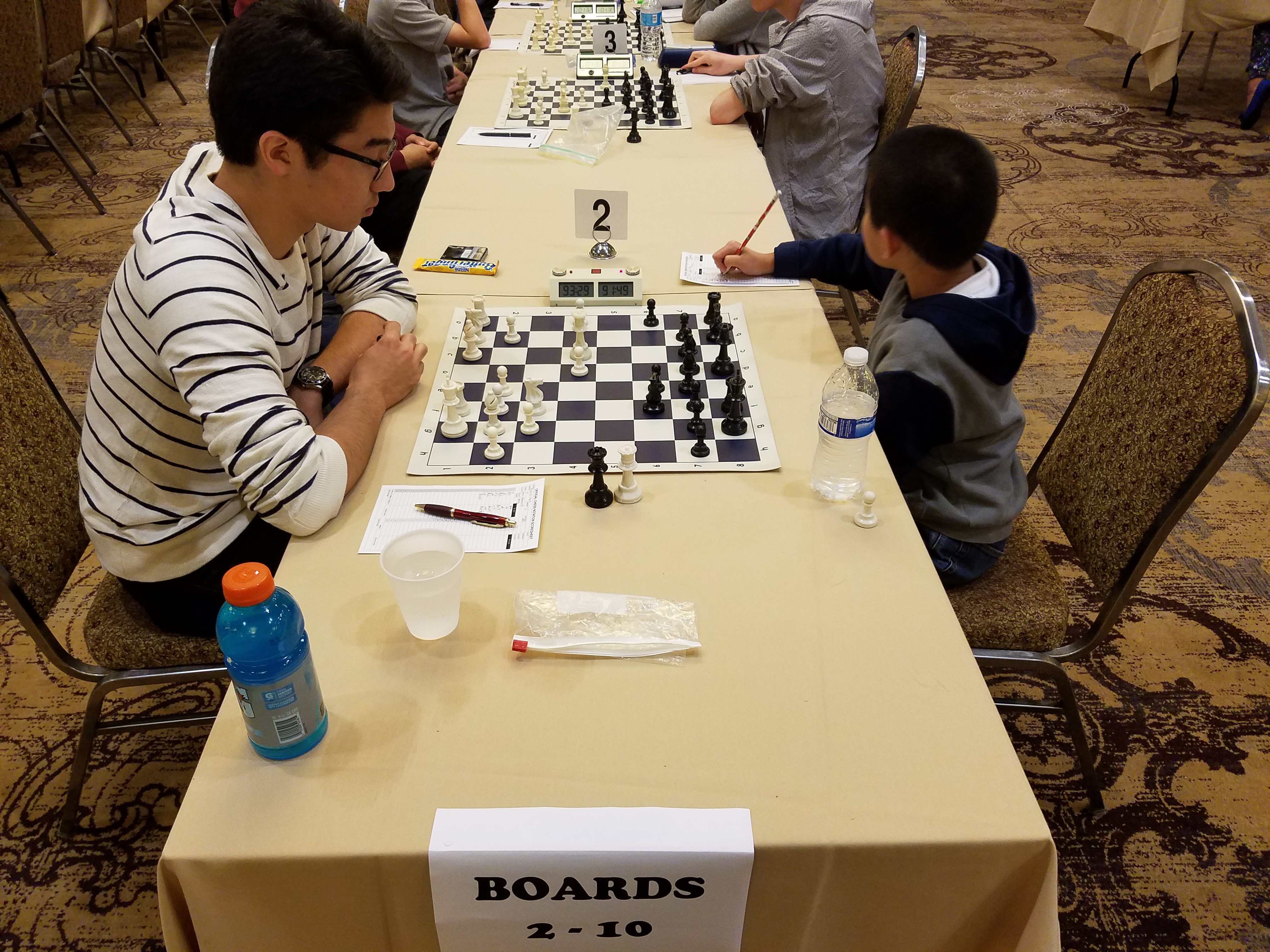 Issac Steincamp vs. Justin Wang Photo Brian Yang
Liu, 14, indeed won the tiebreak. He’ll be playing in the Denker Tournament of High School Champions at the US Open; he took third in the Barber Junior High tournament last year. The effort to up his game now starts in earnest, as he’s well aware that this year’s Junior Invitational comprises all 2500+ players for the first time. Co-champion Wang is already an experienced international competitor (third place Under 10 in the World Youth in Greece and a perfect 9-0 in the North American Under 10 in Mexico last year), and was equal first in the World Open Under 2200, also in 2015. He enjoys basketball and math as well as chess! Steincamp displayed an astute ability to switch his attack from one weak point to another in his Round 4 game.   Another Texan, Ranon Huo, was first in the Under 15 section at 5-1, a half point ahead of Ray Yu and Jason Wang. 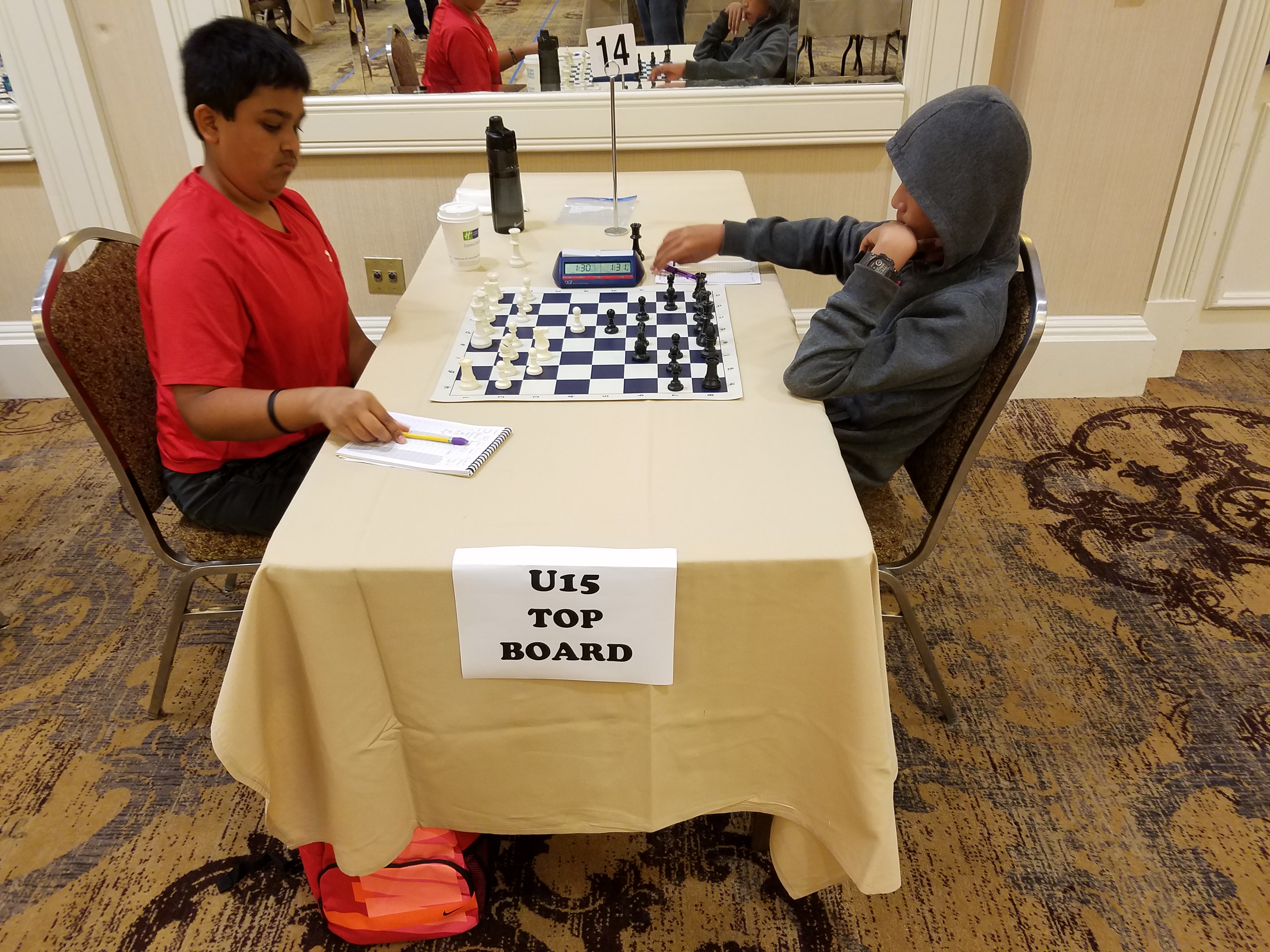 Ranon Huo as Black beat Mohak Agarwalla to win Under 15, Photo Brian Yang
The big favorite, 1759-rated Hersh Singh of Illinois, scored 5½ in Under 11 to finish a half point ahead of Mihir Relan. 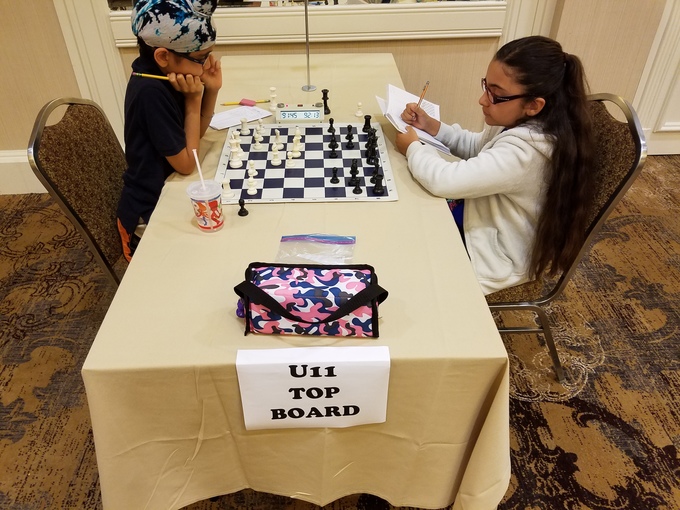 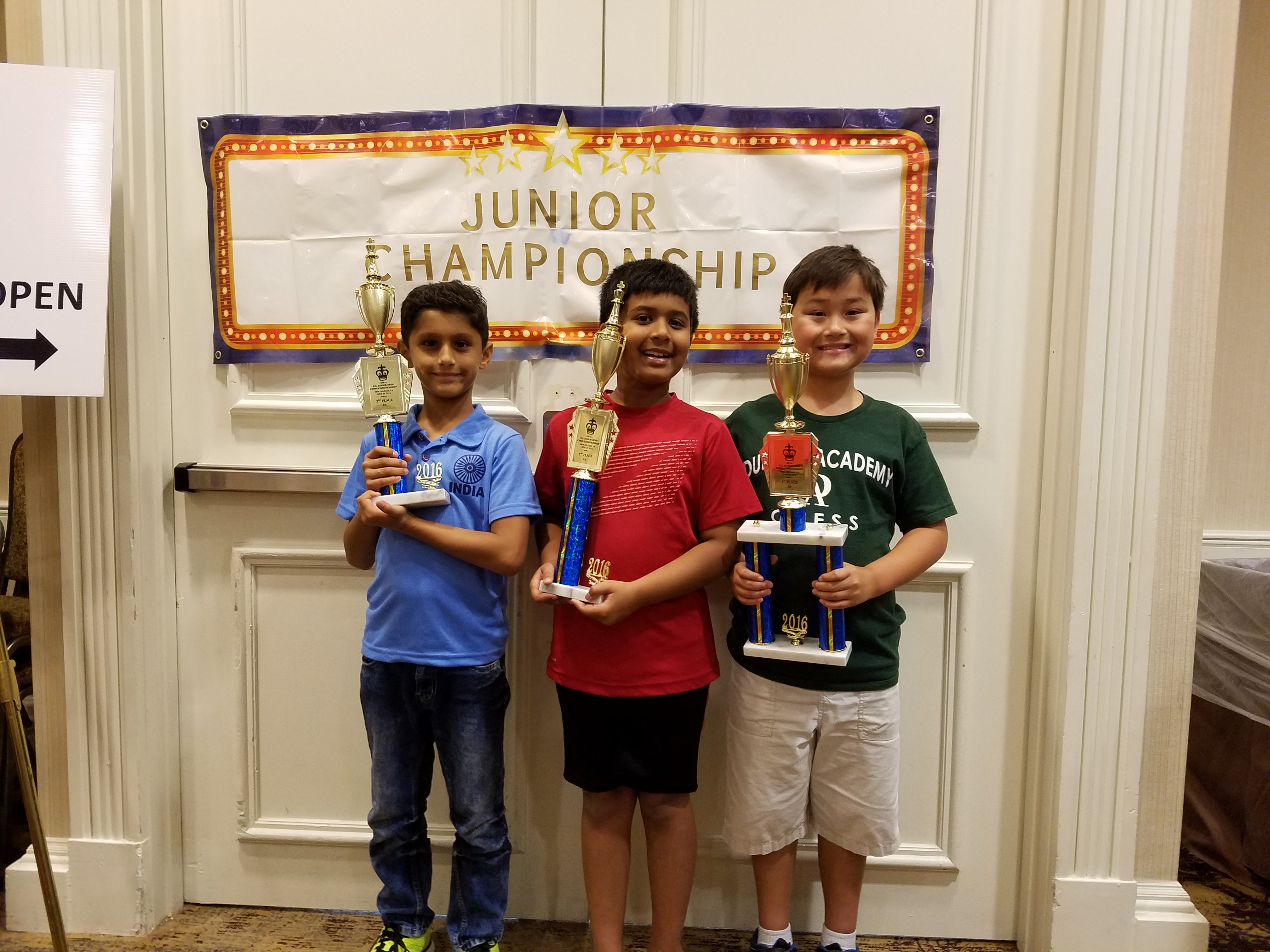 Sunil Amitha Aryan Surya, Pulak Argawalla, and Kai Forbach (TB winner and champion) in U8 Photo Brian Yang
The Junior Open, with an even 100 players, was ably directed by Korey Kormick and Brian Yang. Organizer Jean Troendle of Cajun Chess was attentive to all the needs of players and parents, and the theme was “Chess is the best form of entertainment,” with Oscar-like trophies and a red carpet for the winners to step forward and collect the hardware! Find the full crosstables on MSA. In the US Senior Open, Stephen Stoyko won on tiebreak over IM Mark Ginsburg. Story coming shortly.
SHARE: