Lessons from the 2017 SPICE Cup 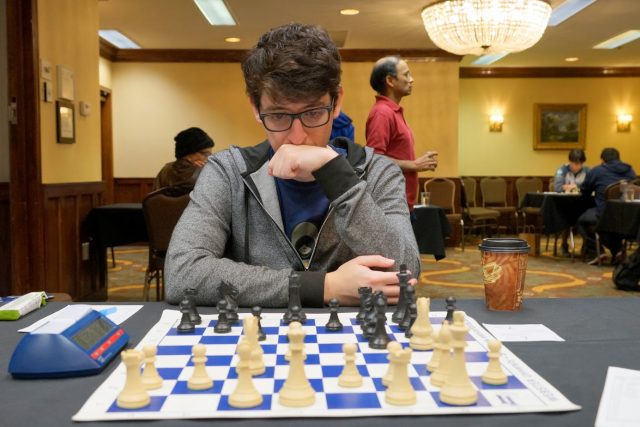 IM Kostya Kavutskiy, Photo Paul Truong
Last week one of my favorite yearly events, the Spice Cup Open, concluded in Saint Louis, Missouri. This is a small but densely packed tournament open to about 50 players, organized by Susan Polgar & Paul Truong and Webster University. With both Webster University and Saint Louis University now fielding powerful rosters of Grandmasters, the Spice Cup had a total of 22 Grandmasters, many of them representing foreign federations, which makes the Spice Cup a great tournament for norm seekers. This year the event saw three players share first with 6.5/9: GM Lazaro Bruzon Batista and GM Yuniesky Quesada Perez of Cuba, as well as GM Darius Swiercz of Poland, currently playing for Saint Louis University. I finished with a decent 5/9 and shared the top U2400 prize with my roommate for the event, IM-elect Shiyam Thavandiran. But for Shiyam this was a much more important event, with his score he managed to cross 2400 FIDE for the first time in his career and officially secure his IM title. Bravo! Full standings, games, and photos from the event can be found here. I would also encourage readers to check out GM Alex Yermolinsky’s personal recap of the event here! 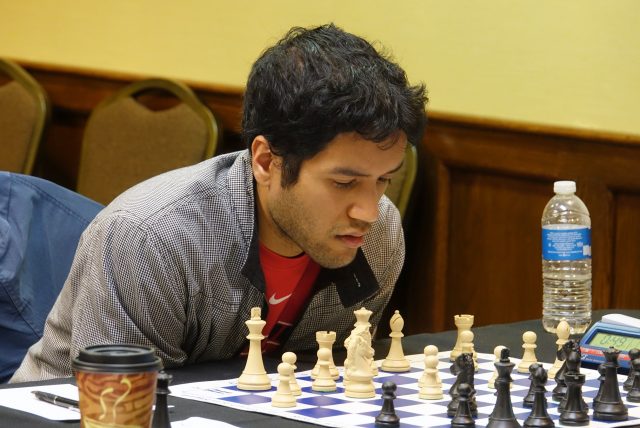 IM Shiyam Thavandiran, Photo Paul Truong
Rather than go through my own event round by round, I’ll highlight some nice tactics that decided my games:

White has some nice compensation for the pawn in the form of active pieces,but it turns out there was a direct win, that Ruifeng spotted without much time on the clock. Show Solution

White to play, find the most decisive win. Show Solution With so many strong players there were so many intriguing games, and after each round I would spend time playing through all the games of the previous round. After the tournament, I took some time to go through some of the more interesting games I could remember from the event. And like most players who play through games, I’m always interested to find the critical moment, to figure out at what point did the winning player find the decisive blow? Or if the game was not won, at one point did the advantageous side spoil their advantage? A lot of players analyze games like this, using the engine to point out the best and worst moves of the game. But there’s one point of analysis that I’d like to share with the readers, which is truly essential for anyone who wants to feel what chess is like at high levels. When you’re using a powerful engine like Stockfish, or Komodo, or Houdini (or even Rybka, hey no judgment here ?), it can often point out a win in under a second, and flash that dazzling +2.5 and soaring evaluation. So you might see that one of the players missed a win, but here’s the thing: don’t stop there. Don’t just look at the evaluation and think “Oh, he missed Nh5, that was winning, +4! How could he miss it?!” Investigate. Input the winning move and see what the best defense is. More often than not, a strong player doesn’t simply overlook the winning move, they often see the possibility but then miss some important resource or detail in the ensuing variations. It’s important to keep this in mind as not all winning lines are created equal. In some cases, one move wins a rook on the spot and seals the deal. But in most cases, seeing the winning move requires accurately calculating multiple variations. Strong players don’t go for lines that simply “look good” without calculating deeply. One miscalculation or oversight could lead to even a very strong player rejecting a winning continuation because they weren’t able to fully “make it work”. 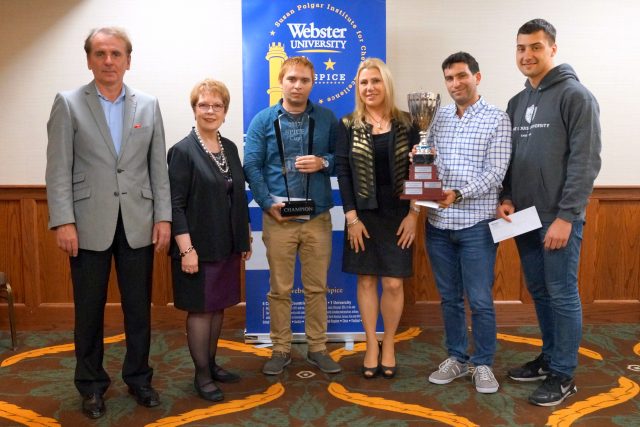 The winner's circle at the SPICE Cup, Bruzon center,  Photo Paul Truong
So here I’ve picked out some of the most interesting segments from the event, featuring some analysis of the various combinations and lines the players might have been calculating during the game. I hope you try your hand at finding the best moves in each position. Here are two wins from one of the tournament winners, GM Lazaro Bruzon Batista: Black to play, can you see how to make use of the weaknesses in White's position?

Can you find (and calculate!) the best move? Show Solution 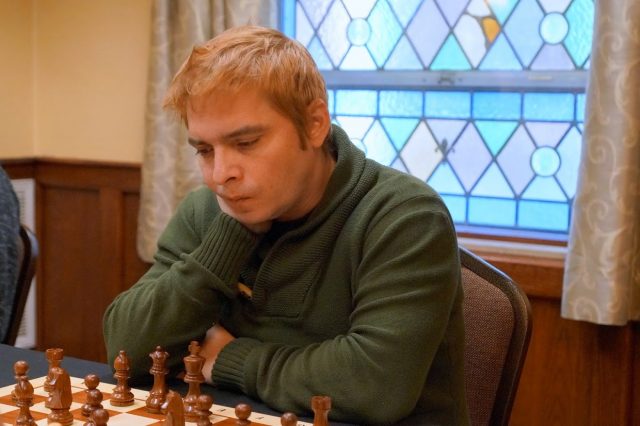 GM Lazaro Bruzon Batista, Photo Paul Truong
Finally, here are two of the most interesting encounters from the event. As a brief disclaimer, please keep in mind I have no idea what the players were actually thinking at the time, I’m more or less playing detective trying to deduce what they saw or didn’t see, but nevertheless the chess is still fascinating! The 2018 Spice Cup has already been announced, with tentative dates set for Oct 21-26, 2018. I’d like to thank Susan Polgar, Paul Truong, chief arbiters Glenn Panner and Frank Niro, as well as the rest of Webster’s team and staff for again putting on an awesome tournament! Kostya Kavutskiy is a professional chess player, coach, and author currently residing in Mountain View, CA. His first book, Modernized: The Open Sicilian was published in February 2015. For more of Kostya, check out his official Twitter and Facebook.
SHARE: