Before they squared off in an Armageddon game to determine who would take the championship title for the 2019 World Open, GMs Le Quang Liem and Jeffrey Xiong bantered about different moves they could have played against each other earlier in the day. 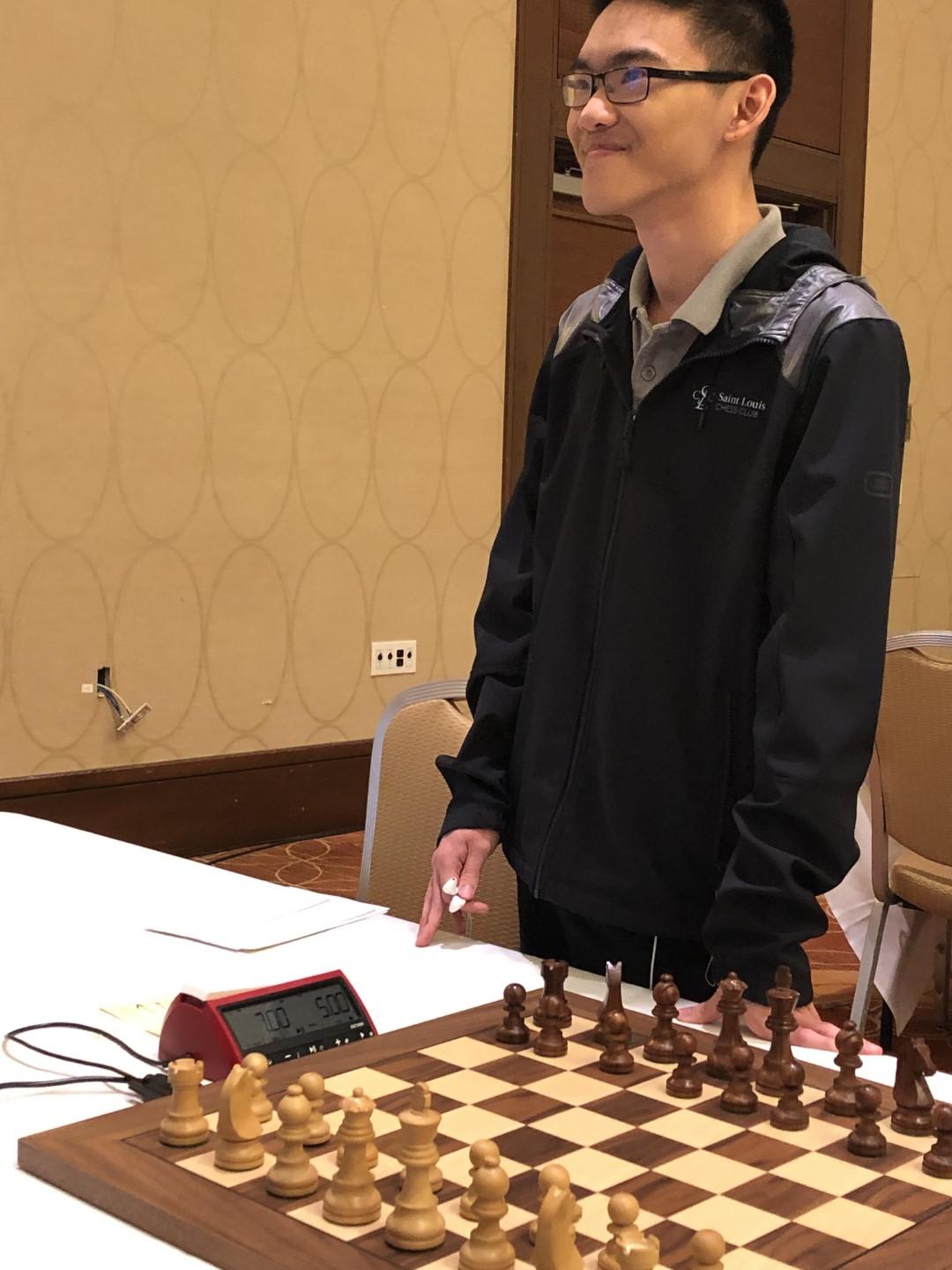 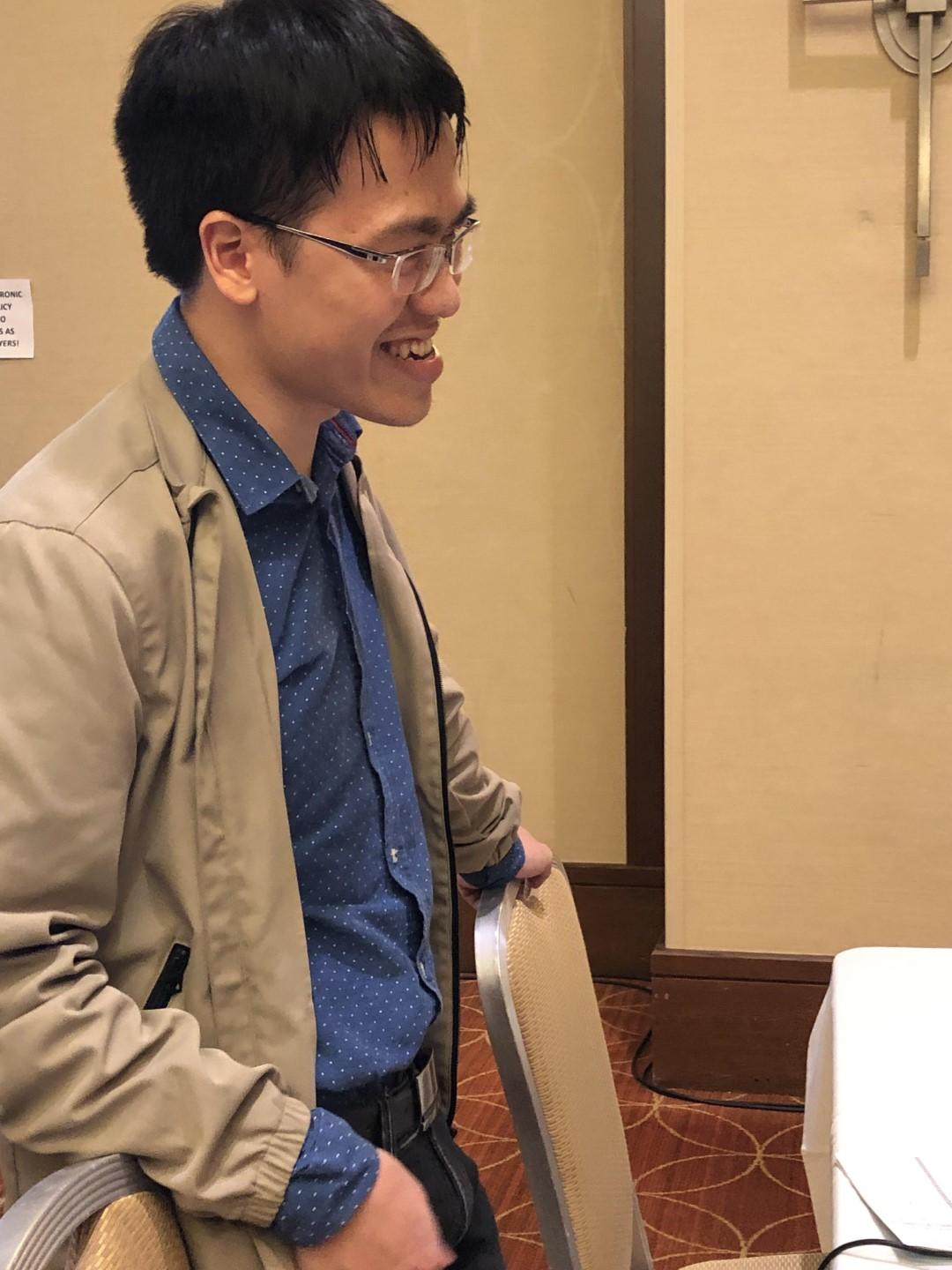 Le Quang Liem (photo Abdul-Alim)
“He put a a lot of pressure and outplayed me quite nicely,” Xiong said of his Round 8 game against Le, which ended in a draw. “He was very close to winning but unfortunately I was able to save the game,” Xiong said. The two GMs drew again in a late-night  Armageddon game that delighted dozens of players and spectators who traveled from near and far to attend the 47th annual World Open over the Fourth of July weekend. Video of the Armageddon game comes courtesy of Daaim Shabazz. https://youtu.be/M1uYIcj4CKY Only this time — based on Armageddon rules that grant a victory to the player with the black pieces in the case of a draw – the draw meant a victory for Le, which gave Le the title – and an extra $500 on top of the $15,000 both players each won. “It is really special for me to win this tournament at my third attempt,” Le said. “The last two years – 2017 and 2018 – I also played quite well, but missed my chances at the end." “The field was very strong this year, so I am very happy that I played decent chess and added one more coveted title to my resume. “ Le said the critical game for him was his Round 7 win over Illia Nyzhnyk, a four-time winner of the World Open who appeared to be on track to win again as the only player with 5-and-a-half points by Round 6. “Illia was leading the tournament by half a point after round 6. I managed to put some pressure, and luckily Illia committed a few mistakes that allowed me to win,” Le said. “It was probably one of my toughest games in this tournament, along with the draw against Jeffery Xiong.” Xiong, 18, still accomplished an impressive feat. At age 18, Xiong became one of the youngest players ever to win first place in the World Open. (GM John Fedorowicz, for example, was also 18 when he won with 8 out of 9 points in 1977.  GM Hikaru Nakamura was 19 when he won in 2007.) Xiong’s father, Wayne Xiong, said he had “no doubt” that his son – the 2016 World Junior Chess Champion – would one day win the World Open. He encourages parents to believe in their kids. “Your kids have talent,” Xiong said. “It may not be in chess. It may be something else. But every kid is precious. Just believe in your kid.” And invest in them, too, Xiong adds. “Coaching is very important,” says the elder Xiong, who along with his wife owns a financial advising firm. “Sometimes parents want to do too much by themselves. This is a professional job. You may be a great engineer, a great scientist. But you are not a great chess coach. Being a chess coach takes experience.” The younger Xiong is coached by GM Vladimir Georgiev, of Chicago. If anyone harbors any skepticism about the value of coaches, consider the result of 14-year-old Guy Cardwell, who tied for first place with two others in the Under 1400 section and pocketed $4,666.67. Cardwell has been training for about a year under National Master David Bennett, of Washington, D.C., who is building a reputation as a producer of tournament talent. For instance, two of Bennett’s students, Zahir Muhammad and Jesse Webb, will represent D.C. in the upcoming Denver Tournament of High School Champions and the Barber Tournament of K-8 Champions, respectively, after having won qualifying events. “I think everyone benefits from a coach,” said Bennett, who competed in the Open Section. “No one is 100 percent objective and your coach can give you some sense of objectivity because when you’re deep in the game, you can get very subjective.” Bennett’s protege, Cardwell, says he didn’t sense much difficulty in his section. “I don’t think I was ever in a losing position,” Cardwell said. “A lot of the games were drawn but my opponents didn’t find it.” Cardwell says he may one day want to write a philosophy book. Perhaps Cardwell could some inspiration from Gregory Nolan, a longtime World Open competitor who got nine different colored shirts – one for each round – printed out with the words “I PLAY CHESS THEREFORE, I EXIST.” 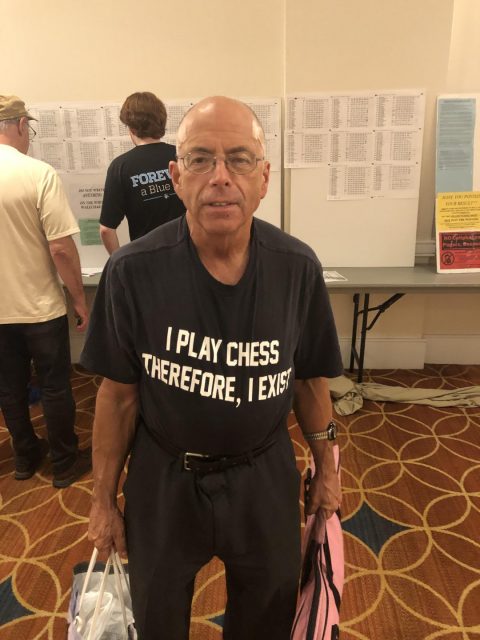 Gregory Nolan (photo Abdul-Alim)
“This is my credo. This is what I stand for,” explained Nolan, a retired custodian from the Central Bucks School District in Pennsylvania. Nolan finished with a respectable 5.5 points in the Under 2200 section. “I play chess because now I can afford to play chess as much as time and money will allow, which is a lot more than when I was working.” Nolan was far from the only player who donned a T-shirt that celebrated the cerebral. A US Chess writer spotted players wearing shirts emblazoned with words that ranged from “Genius Alert” to “Improve My Chess.” Others sported T-shirts from institutions such as Harvard University and the Johns Hopkins Center for Talented Youth. And a contingent of players from the Liguanea Chess Club in Jamaica showed up donning club shirts with the colors of the Jamaican flag. This year’s World Open drew about three dozen GMs and diverse top players from around the world. They included WGM Yaniet Marrero Lopez, the 2011 Women’s Cuban Chess Champion, who finished with 5.5 points in the open section and took home $3750 after tying for 1st for the top U2200 player in the open section. “This tournament has many strong players,” Lopez said. “It’s a great tournament to have good games.” Jamaal Abdul-Alim is a Chess Life contributor who resides in Washington, D.C. You can often find him at the chess tables in DuPont Circle. Follow him on Twitter @dcwriter360.
SHARE: